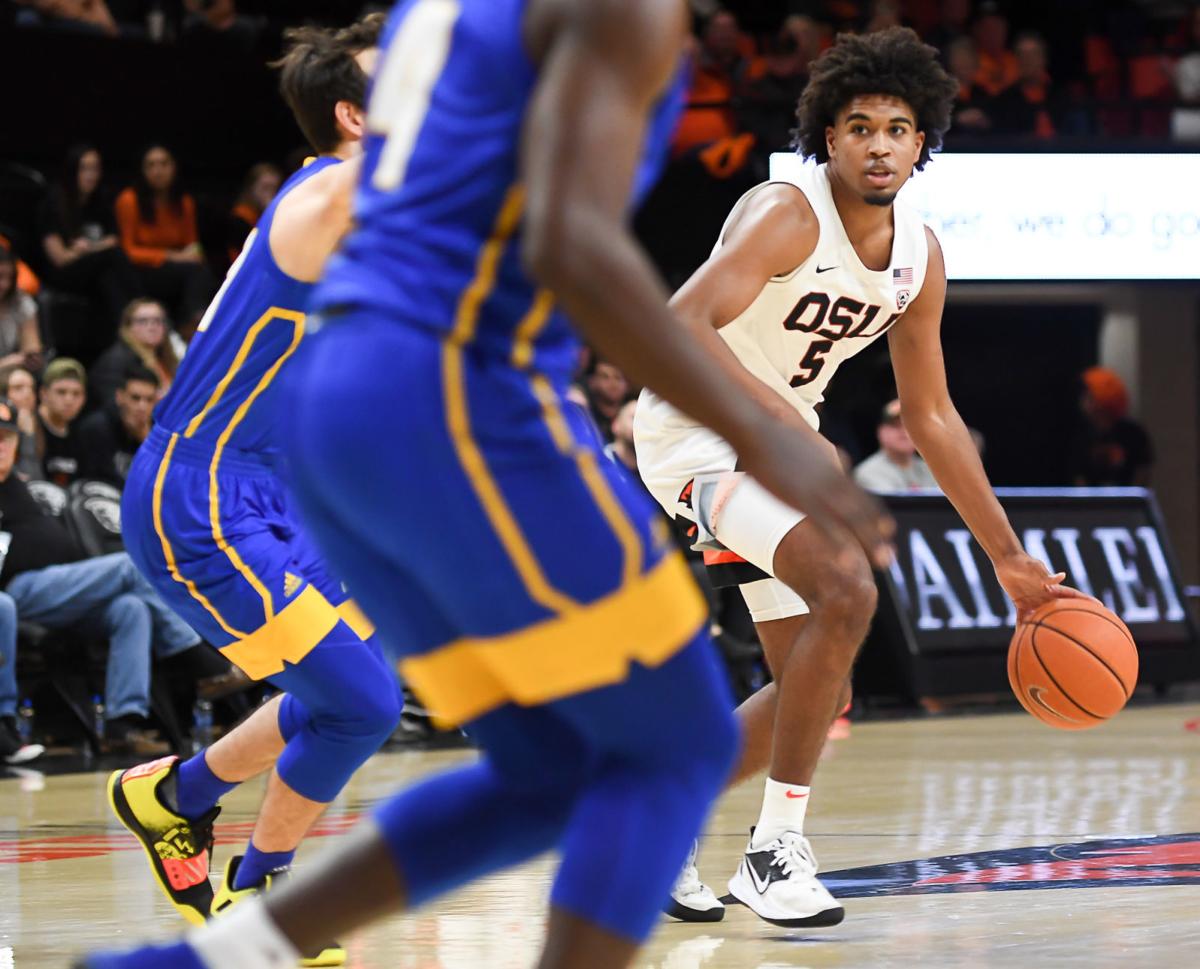 Oregon State's Ethan Thompson hit 8 of 12 shots to finish with 16 points as the Beavers outlasted UC Santa Barbara 78-67 in Gill Coliseum on Wednesday. 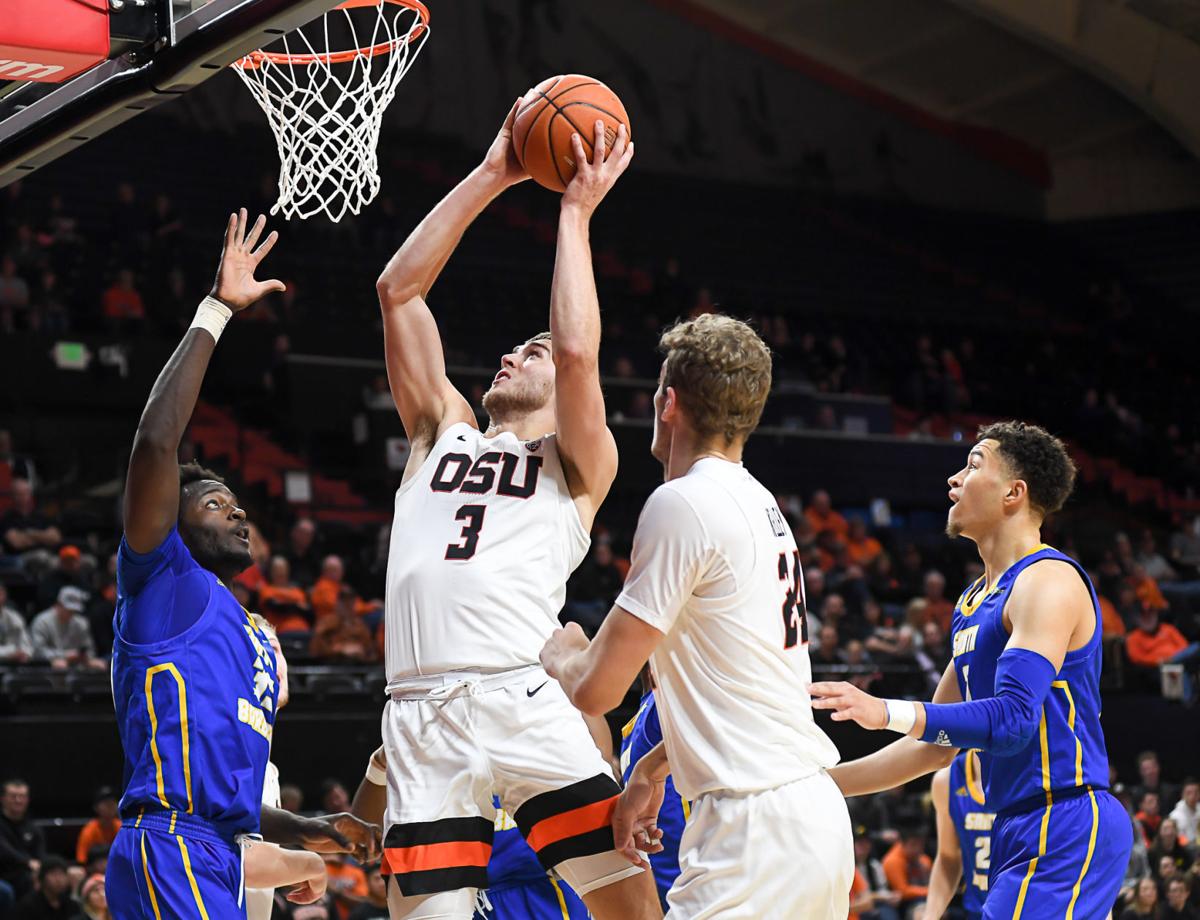 Oregon State's Tres Tinkle finished with 27 points and 11 rebounds and moved into fourth on the Beavers' all-time scoring list. 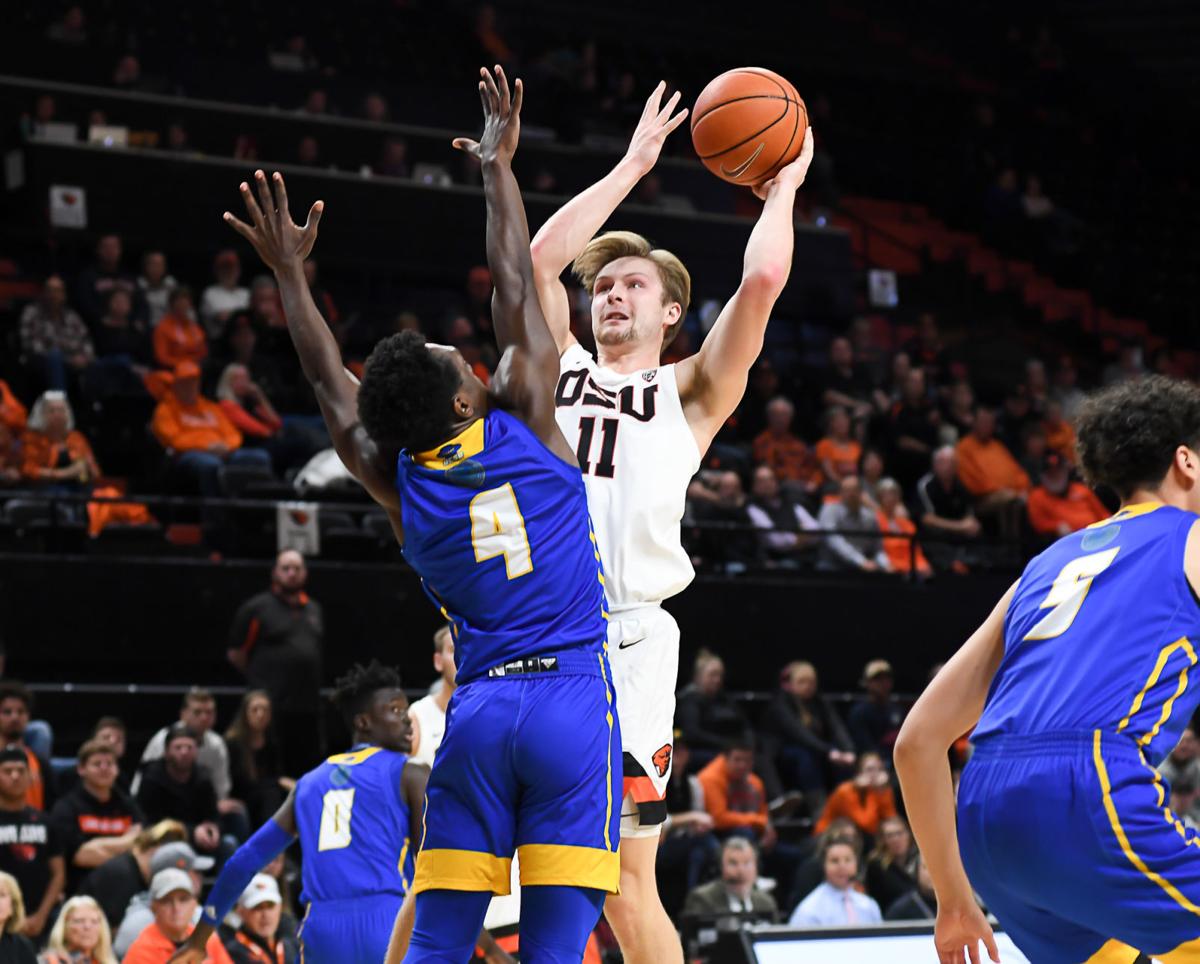 Eventually the shots would begin to fall at a better clip.

Some sloppy passing and a lack of ball and player movement and shot selection slowed Oregon State just enough Wednesday night to allow UC Santa Barbara to hang around into the second half.

But the Beavers eventually found their gear.

Sparked by 24 combined points from Tres Tinkle and Ethan Thompson and stronger offensive flow after halftime, OSU pulled away and then held on for a 78-67 win at Gill Coliseum.

“So we focused on sticking to what we running, what we were calling. Cutting hard and moving around, moving without the ball,” Tinkle said of correcting some earlier struggles. “I think that caused some confusion over there and allowed us to see some easy ones. Then we got confidence and it kept going.”

Tinkle finished with a game-high 27 points and 11 rebounds.

Ethan Thompson, Stevie’s brother, added 16 points on 8-of-12 shooting, his best performance of the young season. Alfred Hollins had a season-high 13 points and five rebounds and Kylor Kelley six points and six blocks.

Leading 34-27 at halftime, Oregon State finally started to gain some separation early in the second half as the offense found what it was looking for after the break.

The Beavers made five of their first six attempts after the break, going ahead 44-31 on consecutive Thompson layins. A Thompson turnaround jumper and a Hollins conventional three-point play made it 7 of 8, and the rout was on.

Oregon State led by 19 three different times and UCSB got no closer than 10 the rest of the way.

First-year post Roman Silva made the most of his floor time, first cleaning up a Tinkle miss inside and then taking a Tinkle pass for another basket. A junior college transfer, Silva finished with six points, four rebounds and one assist in 12 minutes.

He got the majority of his time when Kelley picked up his third foul early in the second half.

“I was trying to do stuff, help the team and put myself in the right spots and they found a way to get me the ball,” Silva said.

Beavers coach Wayne Tinkle said Silva has had some good moments while still adjusting to the speed of the game.

He’s working on his strength and conditioning and learning how to play in the system. The hope is that sometime this season Kelley and Silva, both 7-footers, can play together at the same time.

“He can do a lot of good things for us on both ends,” the coach said. “We know that, and to this point it’s kind of been in short spurts. He’s working hard and we’ve got big plans for him for the rest of the year.”

The Gauchos used a 7-0 run to close within 11, but a Hollins 3-pointer quickly extended the lead again.

Under five minutes, UCSB had climbed within 11 again and had possession. But Kelley’s fifth block of the contest lead to the Beavers retaining the ball.

Zach Reichle made the front end of a 1-and-1 opportunity. A miss on the second was rebounded by Thompson, who fed Hollins for a layin and a 14-point advantage.

Kelley got another block the next time down, and Tres Tinkle’s layin to follow essentially put the game away with OSU up 16.

“Adversity early in the season is good,” coach Tinkle said. “We faced it during and after the Oklahoma game (a loss in Portland). You don’t want to have it at the expense of winning games. But we’re learning some valuable lessons.”

The game marked the return of former Beavers point guard JaQuori McLaughlin, now a junior with the Gauchos.

McLaughlin started 35 of 38 games at Oregon State before leaving the program six games into his sophomore season (2016-17).

Wednesday, McLaughlin had eight points, eight rebounds and six assists in 36-plus minutes.

“I just tried to see it as a regular game,” he said afterward. “Obviously it’s going to be different because I went here, but as a team we just looked at it as another game.”

The Beavers hit a rough stretch offensively after jumping out to a 7-0 lead.

Sloppy play led to OSU scoring just two points in a stretch of nearly six minutes as UCSB got quickly back in the game.

Ethan Thompson’s jumper with 12:22 in the half put the Beavers back in front at 11-9, but to that point the home team had just four field goals to go with four turnovers.

A 7-2 Oregon State run to follow, with scoring from four different players, put the Beavers ahead for good in the half.

Tres Tinkle scored consistently throughout the first 20 minutes, getting to the break with 13. Six of those came in the final 4:07, helping OSU lead by seven at halftime.

The Beavers closed the gap in the rebounding category late in the half to trail 22-20. The Gauchos collected nine of the offensive variety but turned those into just four second-chance points.

Get the latest Beaver sports news in your inbox

Delivered 3x a week directly to you!

Oregon State is on the road Thursday night in Seattle to play Washington in a Pac-12 Conference game. Here’s a look at the Huskies.

Momentum built off a conference win will have to wait for another time.

Oregon State's Ethan Thompson hit 8 of 12 shots to finish with 16 points as the Beavers outlasted UC Santa Barbara 78-67 in Gill Coliseum on Wednesday.

Oregon State's Tres Tinkle finished with 27 points and 11 rebounds and moved into fourth on the Beavers' all-time scoring list.