Become a Member
Read Today's E-edition
Share This
OSU baseball: Beavers headed to Forth Worth Regional for NCAA tournament
0 Comments
Share this
1 of 2 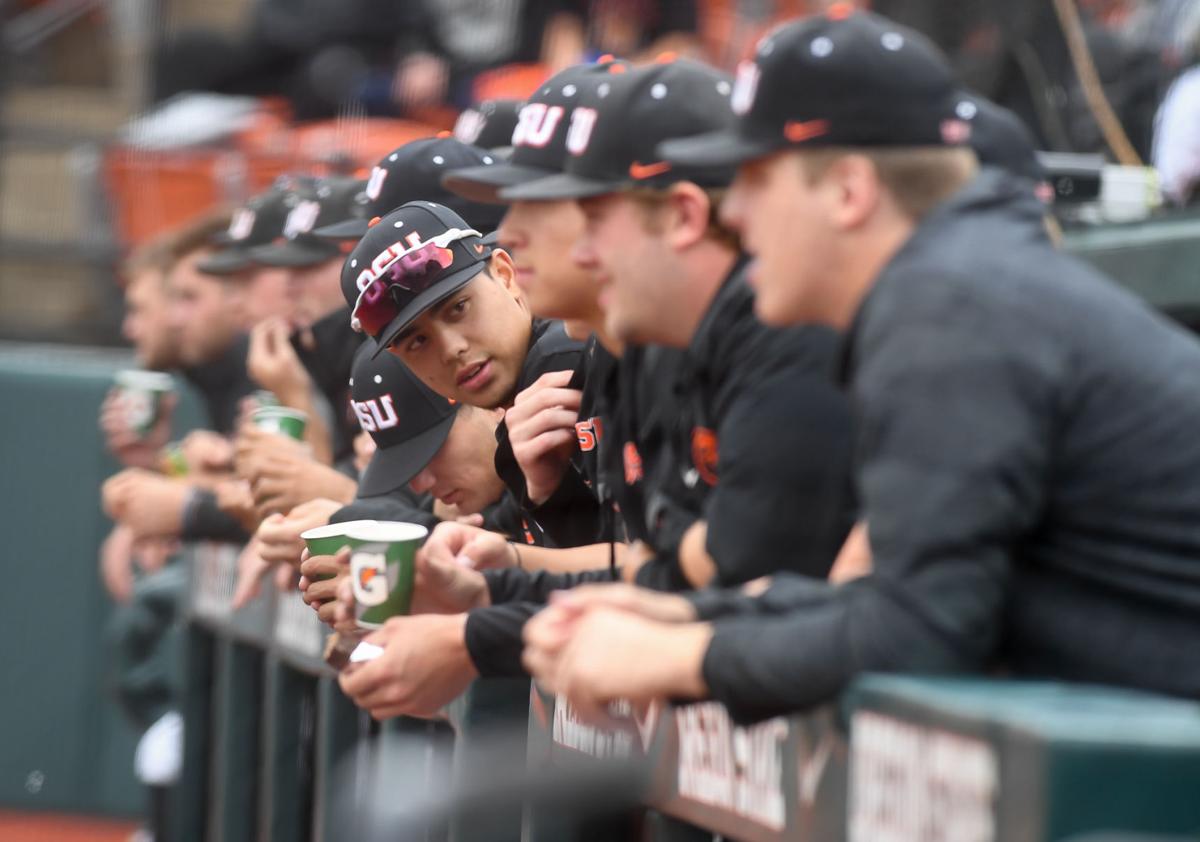 The Oregon State baseball team landed a No. 2 seed at the Fort Worth Regional. 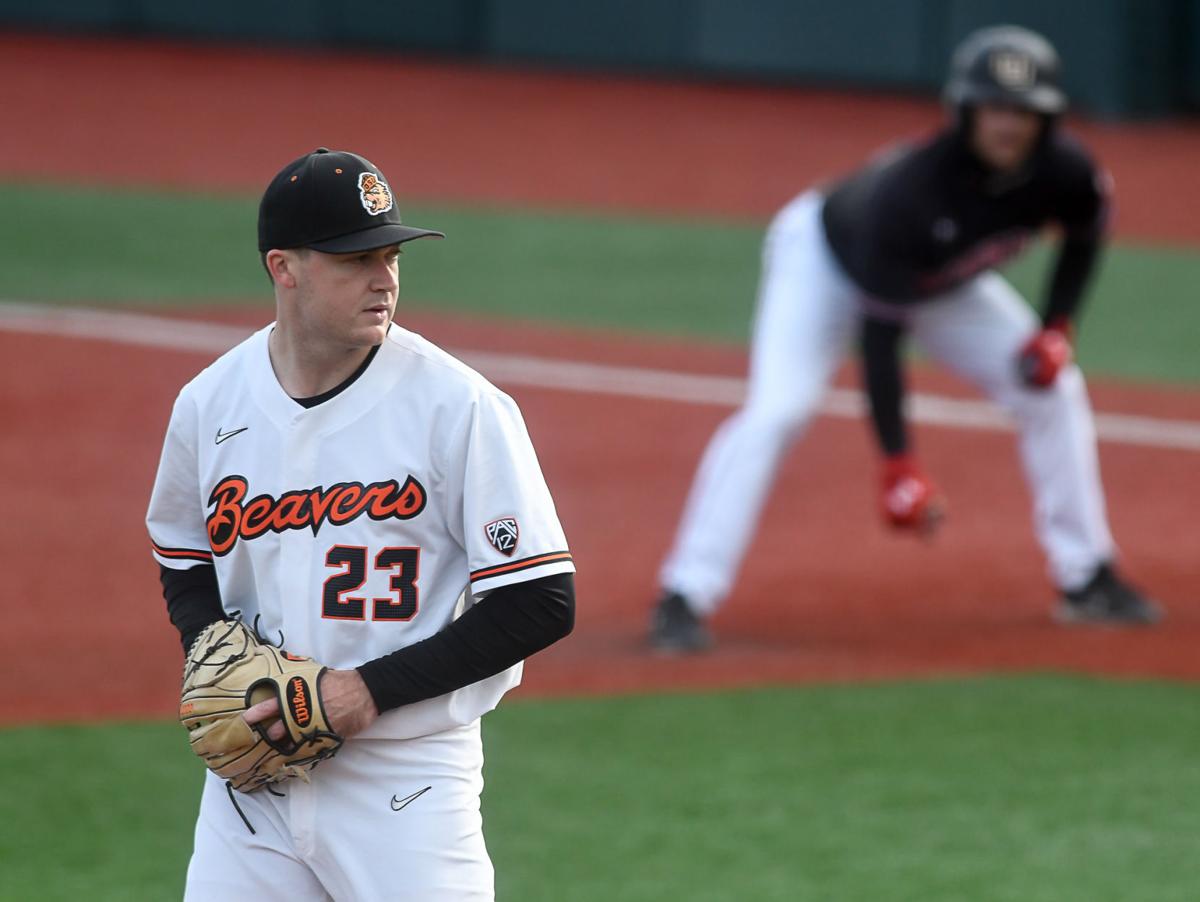 Pitcher Kevin Abel will get the start against Dallas Baptist.

Oregon State’s players and coaches gathered in the Goss Stadium Omaha Room Monday morning to find out when and where their postseason journey will begin.

When they learned the specifics, there wasn’t an overwhelming feeling of relief, or excitement. They celebrated, sure. But there was a sense Monday was the day the Beavers’ season officially began.

“We don’t really care who it is and where we’re going, we just want to keep going and wear this jersey as long as we can,” Oregon State pitcher Kevin Abel said.

The NCAA tournament bracket was revealed Monday, and Oregon State will travel to the Fort Worth Regional, hosted by Texas Christian University. The Beavers, who finished the regular season 34-22, will face Dallas Baptist (37-15) Friday at 11 a.m. Pacific at Lupton Stadium in Fort Worth. The game will air on ESPN 3.

Kevin and Donnie preview Game 3 tonight between the Trail Blazers and Nuggets.

After navigating its way through a brutal Pac-12 schedule, Oregon State ultimately ended up in a more favorable tournament position than many expected it to. Most tournament projections had the Beavers tabbed as a No. 3 seed. There was even a bit of worry that a poor showing in the final regular season series at Stanford over the weekend could keep Oregon State out of the tournament entirely.

But the Pac-12 ultimately landed six teams in the tournament — only the SEC (9) and ACC (8) ended up with more — and that, along with a tough non-conference slate, ultimately bolstered Oregon State’s resume.

“When you play for a premiere program like we play for, that’s one of the things you deal with — when you’re a two-seed at a regional, it’s a down year,” Oregon State catcher Troy Claunch said. “Obviously we want to host every single year, and we believe we have the potential to host every single year. That’s not how it played out this year, so we’re just going to go in and play our game and hopefully come out of there as a two-seed.”

The Beavers had a lackluster finish to the season, going 3-6 over their final nine conference games against Arizona State, which earned a No. 2 seed, and Arizona and Stanford, both of which are hosting regionals.

Oregon State’s players and coaches know that the season has been decided by fine margins. If the ball had bounced a different way a few times this year, the Beavers may very well have been planning to host their own regional this week.

But instead of dwelling on what might have been, they are embracing on the opportunity and leaning on their big-game experience.

“I think one of the things that has helped us this year was all the close games,” Oregon State coach Mitch Canham said. “Dealing with great competition, dealing with difficult losses, dealing with tight games that we’ve come back and won. I mean, we’ve seen these guys come back in the seventh, eighth and ninth innings and throw up runs. We’ve seen what our pitchers can do. Now this is about putting it all together and competing every pitch.”

While the Beavers’ season has been deemed a disappointment by some, Claunch and Canham said the final game of the regular season, a 9-1 win at Stanford, provided a huge boost of confidence.

The Beavers practiced in Corvallis Monday and will do so again Tuesday. Wednesday, they will fly out and then aim to get a light workout done in Texas that evening.

Tuesday in particular will be crucial for Canham and his staff to go over scouting reports on the three other teams in the region as they aim to highlight any weaknesses they could potentially exploit.

Abel, who finished the regular season 3-4 with a 3.24 ERA and 106 strikeouts over 79 innings, will be Oregon State’s Friday night starter. From there, the rotation will stay the same as it has all season; Cooper Hjerpe will pitch the second game of the regional, and Jake Pfennigs will throw the third, if it is necessary.

If the need for a fourth game were to arise, Will Frisch or Jack Washburn would be the likely starter.

On Friday, Abel will likely square off with Dallas Baptist ace Dominic Hamel. A right-handed junior, Hamel is 12-2 with a 3.71 ERA and 123 strikeouts in 80 innings.

Ask any pitcher on Oregon State’s staff. Most of them can recall a time when Andy Armstrong has bailed them out of trouble with a dazzling def…

OSU baseball: What has happened to the Beavers’ bullpen?

At the start of the season, Oregon State adopted a nickname for it's pitching staff: The Gauntlet.

OSU baseball: What to know about the Fort Worth regional

OSU baseball: The Beavers’ regular season by the numbers

With Oregon State’s regular season in the books, the Beavers will now set their sights toward the Fort Worth regional with hopes of hanging a …

The Oregon State baseball team landed a No. 2 seed at the Fort Worth Regional.

Pitcher Kevin Abel will get the start against Dallas Baptist.