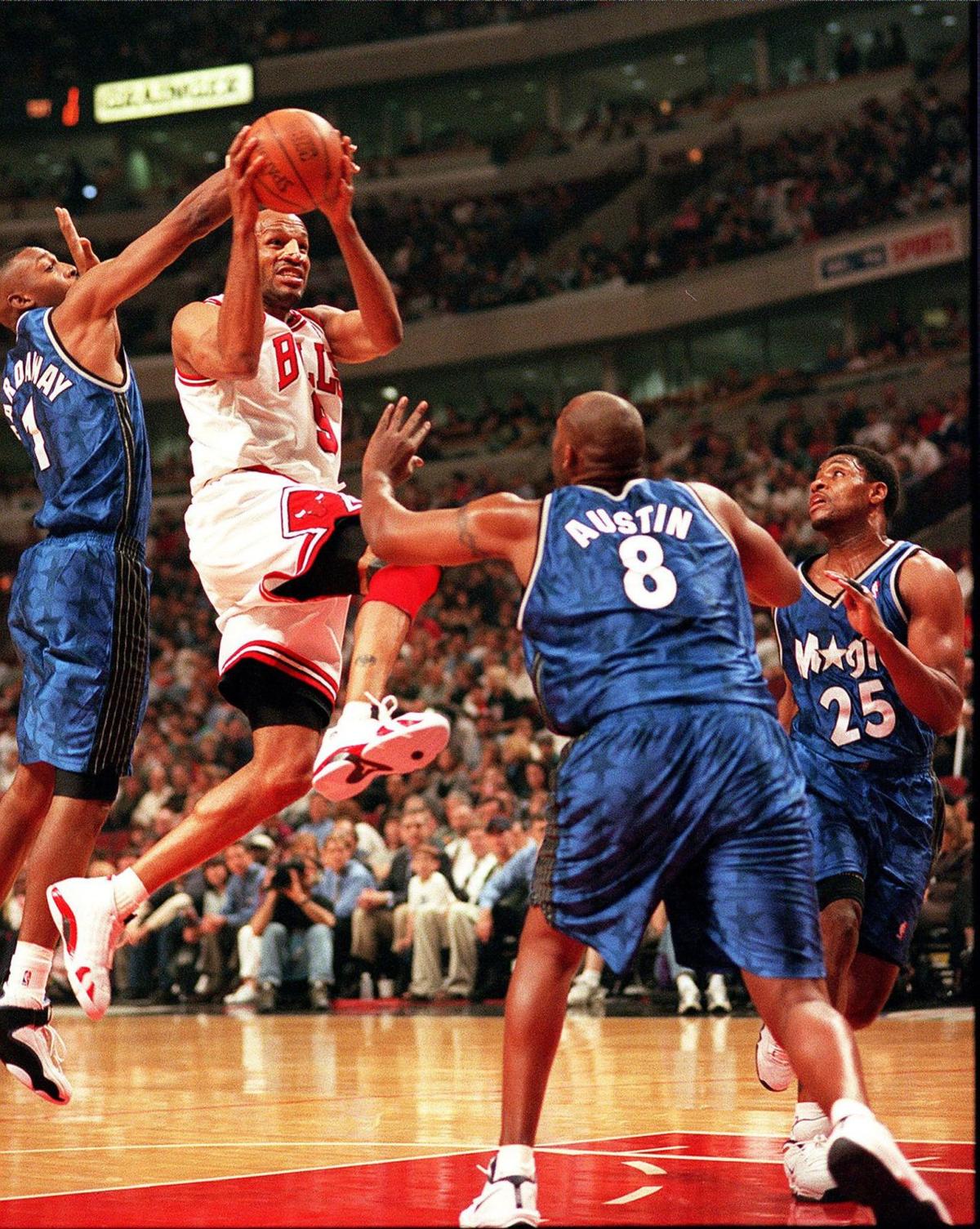 Bulls guard Ron Harper tries to shoot while surrounded by Magic players Anfernee Hardaway, left, Isaac Austin and Nick Anderson during a game at the United Center on May 5, 1999. 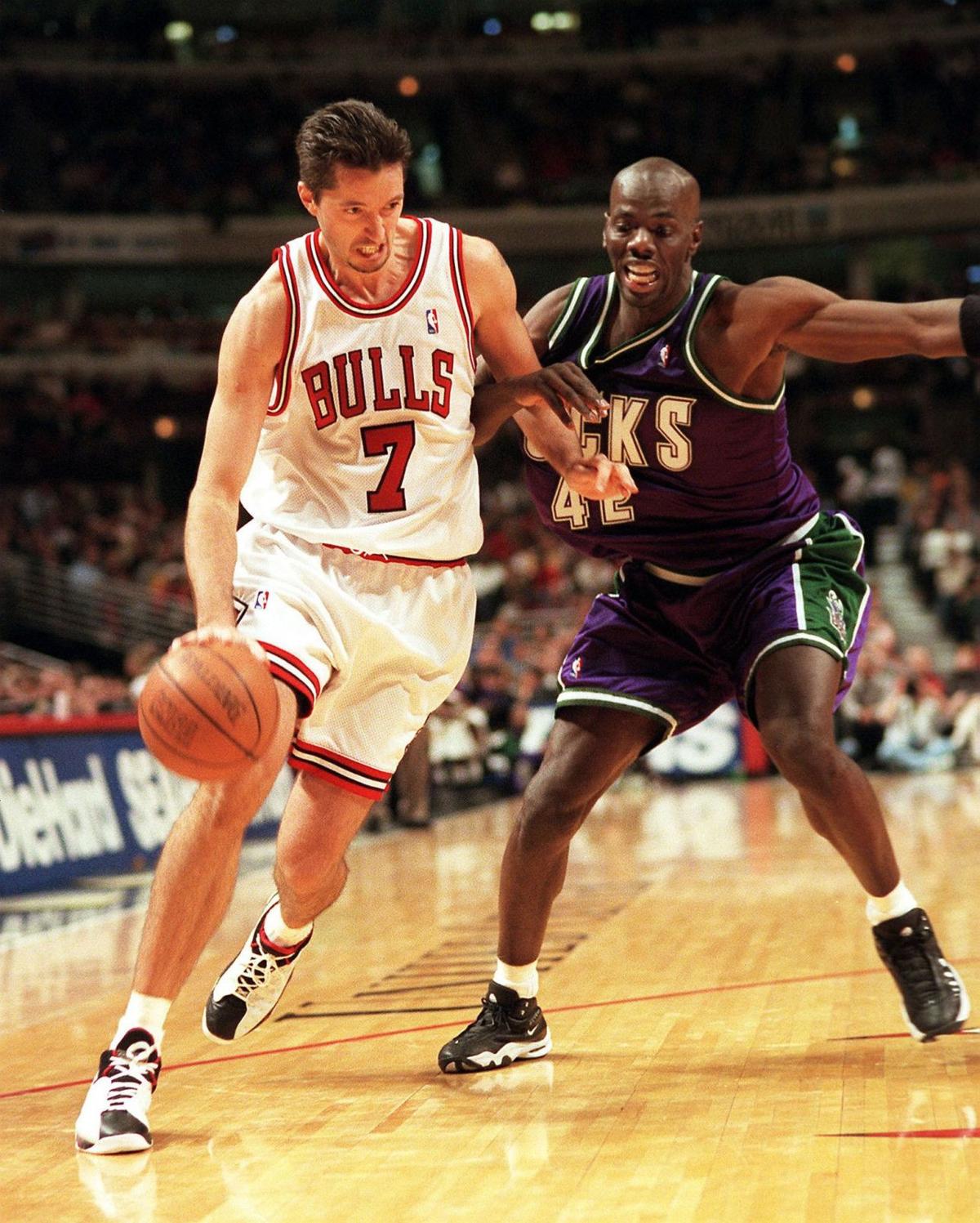 Bulls forward Toni Kukoc drives to the basket against the Bucks' Tyrone Hill at the United Center on Feb. 23, 1999.

CHICAGO - After the Bulls won their fifth NBA championship in 1997, Michael Jordan sat at the postgame news conference and fielded a question about a potential rebuild.

"No one is guaranteed rebuilding in two, three or four years. The Cubs have been rebuilding for 42 years," he said, referencing their then-drought without a World Series appearance.

A similar quip could be made about the Bulls now: 22 years after Jordan played his final game for the franchise, the team has not returned to the NBA Finals since. The Bulls have been to the Eastern Conference finals only once in that span, getting dispatched by LeBron James and the Heat in five games in 2011.

That "Last Dance" season of 1997-98 produced a sixth championship in eight years with Jordan still at the peak of his powers before the dynasty came to a halt the following season, which didn't begin until February 1999 because of a lockout. Jordan retired for the second time, Scottie Pippen was sent to the Rockets in a sign-and-trade deal and coach Phil Jackson went on his first sabbatical.

Only a few holdovers remained from the championship team, and the Bulls headed into a certain losing season for the first time since Jordan's first few seasons in the league.

Toni Kukoc led the team in points (18.8), rebounds (7.0) and assists (5.3) per game. The Bulls, meanwhile, scuffled to just 13 wins (a .260 winning percentage) during a season shortened to 50 games by the lockout, the lowest number of wins in team history.

And that team still holds a dubious place in NBA history - it scored 49 points during an April loss to the Heat, the fewest points by any team in the shot-clock era.

There will be no 10-part documentary on the 1999 Bulls, but here's a look back at the team charged with following "The Last Dance," including where they were during the 1997-98 season, whom they replaced and their contributions to the Bulls in the lockout-shortened season:

When Jerry Krause first started pursuing Toni Kukoc to come from Europe to the Bulls, he thought about Kukoc as someone who not only could play alongside Jordan and Pippen, but also could lead the team once they moved on. Kukoc was thrust into the leading role in '99 after most of the core moved on. Although he was the team's best player, he wasn't able to carry a team on its own.

Ron Harper joined Toni Kukoc as the only returning starters for the Bulls, starting 35 games in '99 and finishing second on the team in scoring with 11.2 points per game. However, at 35 and in his 13th season in the league, his days of being a go-to option had faded.

Dickey Simpkins saw some action during the beginning of the 1998 playoff run, and he saw a bump in playing time after the roster turnover. A former first-round pick by the Bulls in 1994, Simpkins made just 17 career starts before he became a regular starter in '99. He was relatively productive, averaging 9.1 points and 6.8 rebounds while leading the team with 2.9 win shares, an advanced metric that estimates the number of wins a player contributed to.

Randy Brown never was a scorer coming off the bench for the Bulls during their second three-peat, but he saw increased playing time in 1999. That led to some career-high numbers - 8.8 points, 3.8 assists and 3.4 rebounds per game - as he became the lead guard for the Bulls offense.

The Bulls kept Bill Wennington in the same role despite not having Luc Longley or Dennis Rodman in the frontcourt.

The Bulls drafted Booth in the first round in 1997, but his NBA career spanned just two seasons, getting opposite ends of the experience. He barely saw the floor in his first season but averaged 3.1 points and 2.4 rebounds in '99.

Rusty LaRue was undrafted but earned a spot on the Bulls in limited playing time in 1997-98 and saw his playing time increase the next season. He played about 17 minutes per game and hit 33.7% of his 3-pointers off the bench.

General manager Jerry Krause made it very clear that coach Phil Jackson was not going to return, and many believed Tim Floyd had been handpicked as the successor. Floyd was a fairly successful college coach, but his success did not translate to the NBA. He went 49-190 (.205) in his four seasons with the Bulls.

Brent Barry was the Bulls' biggest offseason addition and became the team's third-leading scorer with 11.1 points per game. But he suffered an injury early in the season that limited him to 37 games (30 starts) while he shot 30.2% from beyond the arc, the worst mark of his career. He lasted only one season in Chicago and was traded to the SuperSonics.

The Bulls shipped Luc Longley to the Suns for a 1999 first-round pick, Martin Muursepp, Bubba Wells and Mark Bryant before the season. Bryant began the year in the starting lineup and averaged 9.0 points and 5.2 rebounds in about 27 minutes. He lasted just one year with the Bulls.

1997-98: Played for the Rockford Lightning in the Continental Basketball Association and Alba Fehervar in Hungary.

Before his left his home country, David was advertised as "the Michael Jordan of Hungary." Once he got on the court, it was clear the comparison was a bit overzealous. David, the first Hungarian to play in the NBA, was in Bulls training camp in 1997 before a stint with Rockford in the CBA and returning to Hungary and helping his national team end a 30-year drought to qualify for the European championship. He appeared in all 50 games for the Bulls in '99, playing 18 minutes per game while averaging 6.2 points.

Corey Benjamin appeared in 38 games as a reserve for the Bulls, but he is best known for claiming he could beat Michael Jordan one-on-one. The boast prompted Jordan, retired and still dealing with a finger injury via cigar cutter, to show up to practice to accept Benjamin's challenge - and promptly demolish him.

Visit the Chicago Tribune at www.chicagotribune.com

Yes, Michael Jordan brought Dennis Rodman back to the Chicago Bulls after his vacation. But, no, the rescue mission wasn't in Las Vegas.

The rescue mission described at the start of Episode 4 of "The Last Dance" - an emergency assignment for Michael Jordan to go save Dennis Rodman from the clutches of Carmen Electra, abruptly ending the unpredictable forward's overextended vacation - happened in the Chicago suburbs, for what it's worth, and not Las Vegas. Jason Hehir, the director of "The Last Dance," confirmed as much to the ...

Jerry Sloan, the coach who took the Utah Jazz to the NBA Finals in 1997 and 1998 on his way to a spot in the Basketball Hall of Fame, died Friday. He was 78.

The legal battle between Zion Williamson and his former agent in a Florida court now includes allegations he received impermissible benefits prior to his one season playing basketball at Duke. According to court documents filed Wednesday in Miami, Gina Ford of Prime Sports Marketing claims, without presenting evidence, that Williamson and his parents "demanded and received gifts, money and/or ...

"The Last Dance" was superb entertainment - a 10-hour starburst of nostalgia that showcased the 1997-98 Chicago Bulls in general and iconic basketball player Michael Jordan in particular. But the series focused its Jordan-centric lens only through June 1998, when Jordan was 35 years old and once again standing at basketball's mountaintop. Jordan is 57 now. But the ESPN documentary only ...

How will the NBA resume play? Jared Dudley has some answers

LOS ANGELES - Los Angeles Lakers forward Jared Dudley believes it's in the best interest of players to resume the NBA season. When he hears the opposing viewpoint from his peers, it concerns him. "There has been people that have voiced it not only to the media but behind the scenes," Dudley said. "They haven't been well educated and gotten the information they needed to be able to make the ...

Scores two points - the lowest scoring game of his career - in 12 minutes in a loss to the Lakers. The next day he's placed on the injured list, ending his season.

Joins the Washington Wizards as part owner and president of basketball operations.

Becomes part-owner of the Charlotte Bobcats and becomes, according to the team, "managing member of basketball operations."

Bulls guard Ron Harper tries to shoot while surrounded by Magic players Anfernee Hardaway, left, Isaac Austin and Nick Anderson during a game at the United Center on May 5, 1999.

Bulls forward Toni Kukoc drives to the basket against the Bucks' Tyrone Hill at the United Center on Feb. 23, 1999.