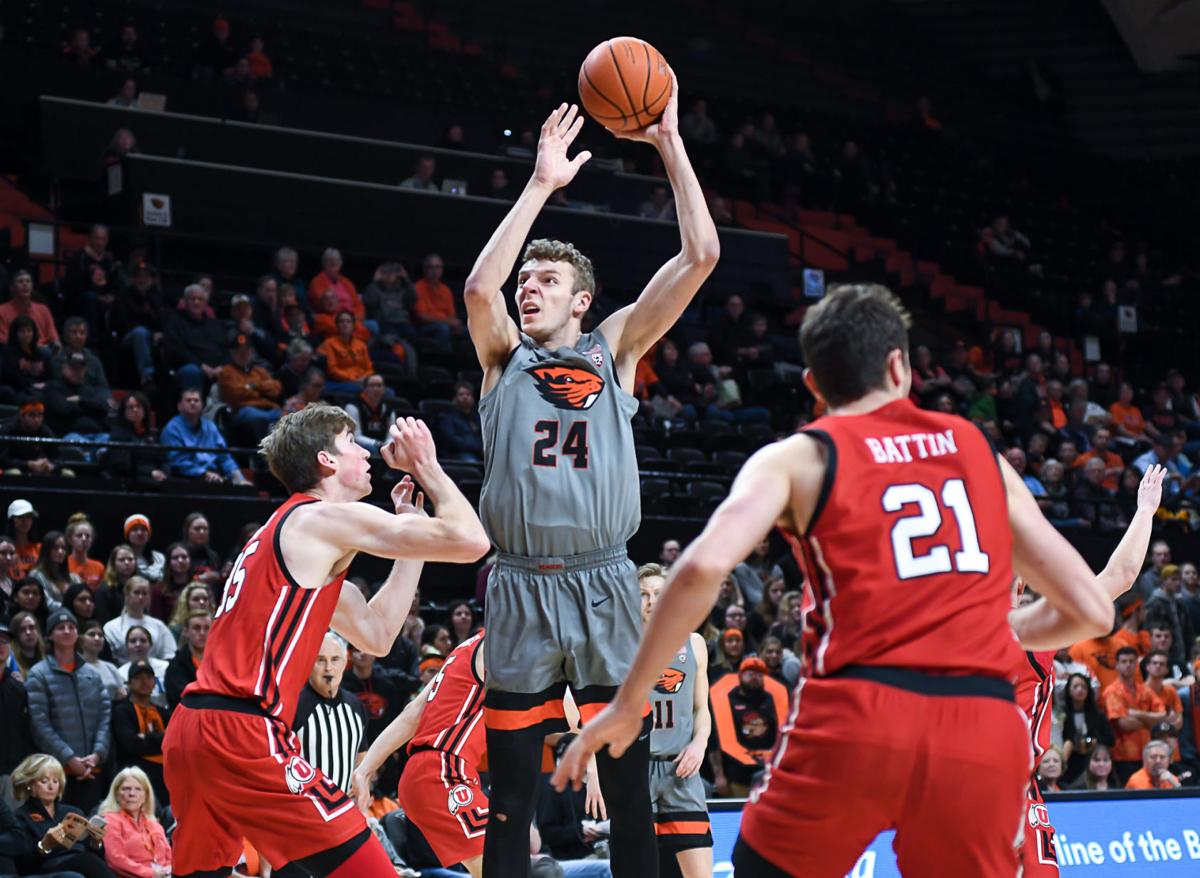 Kylor Kelley led Oregon State with 16 points and nine rebounds. Kelley was 7 of 10 from the field with five dunks or layups above the basket in OSU's 70-51 win against Utah. 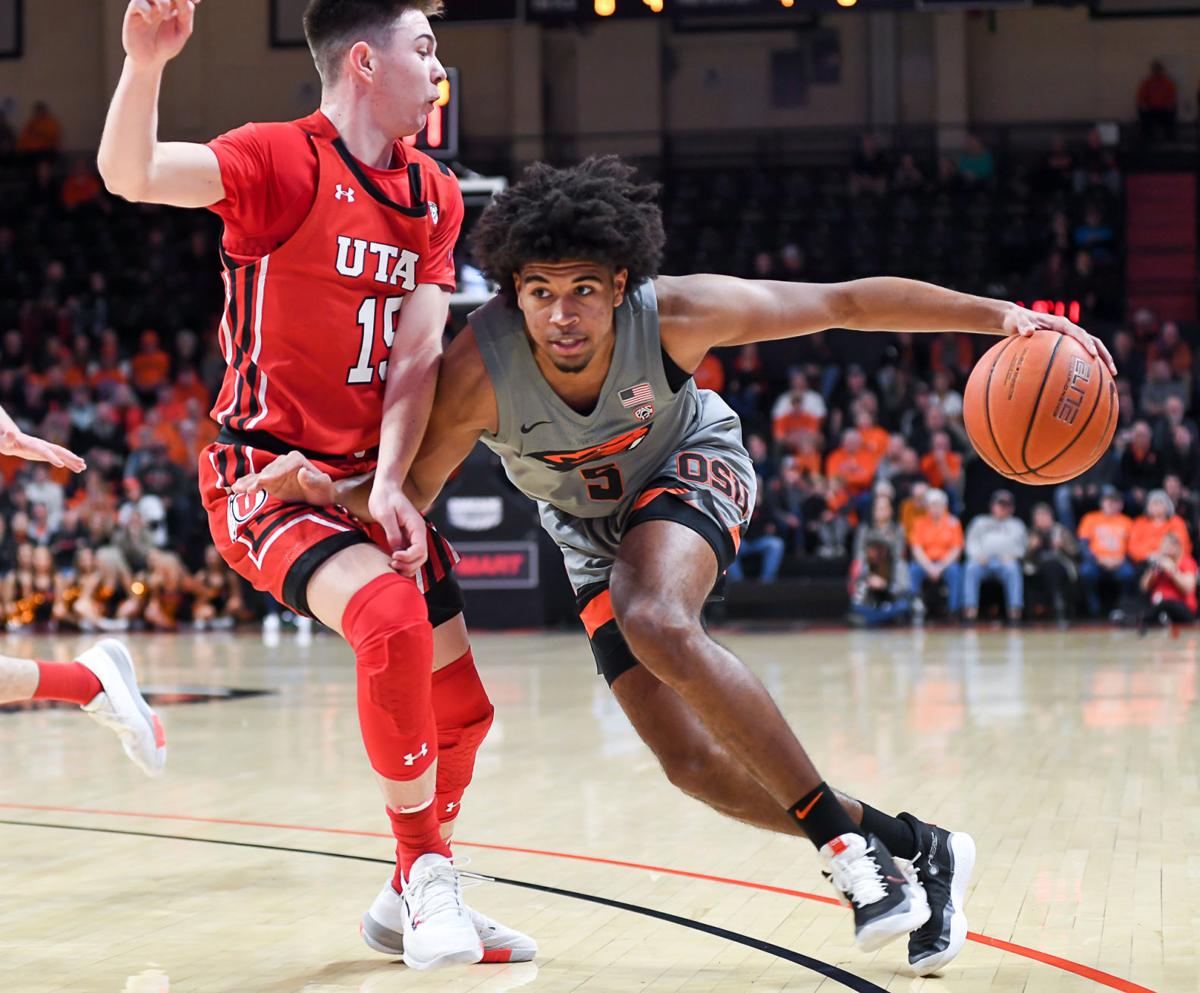 Oregon State's Ethan Thompson drives to the hoop in the first half. Thompson had 13 points and 11 assists for the Beavers. 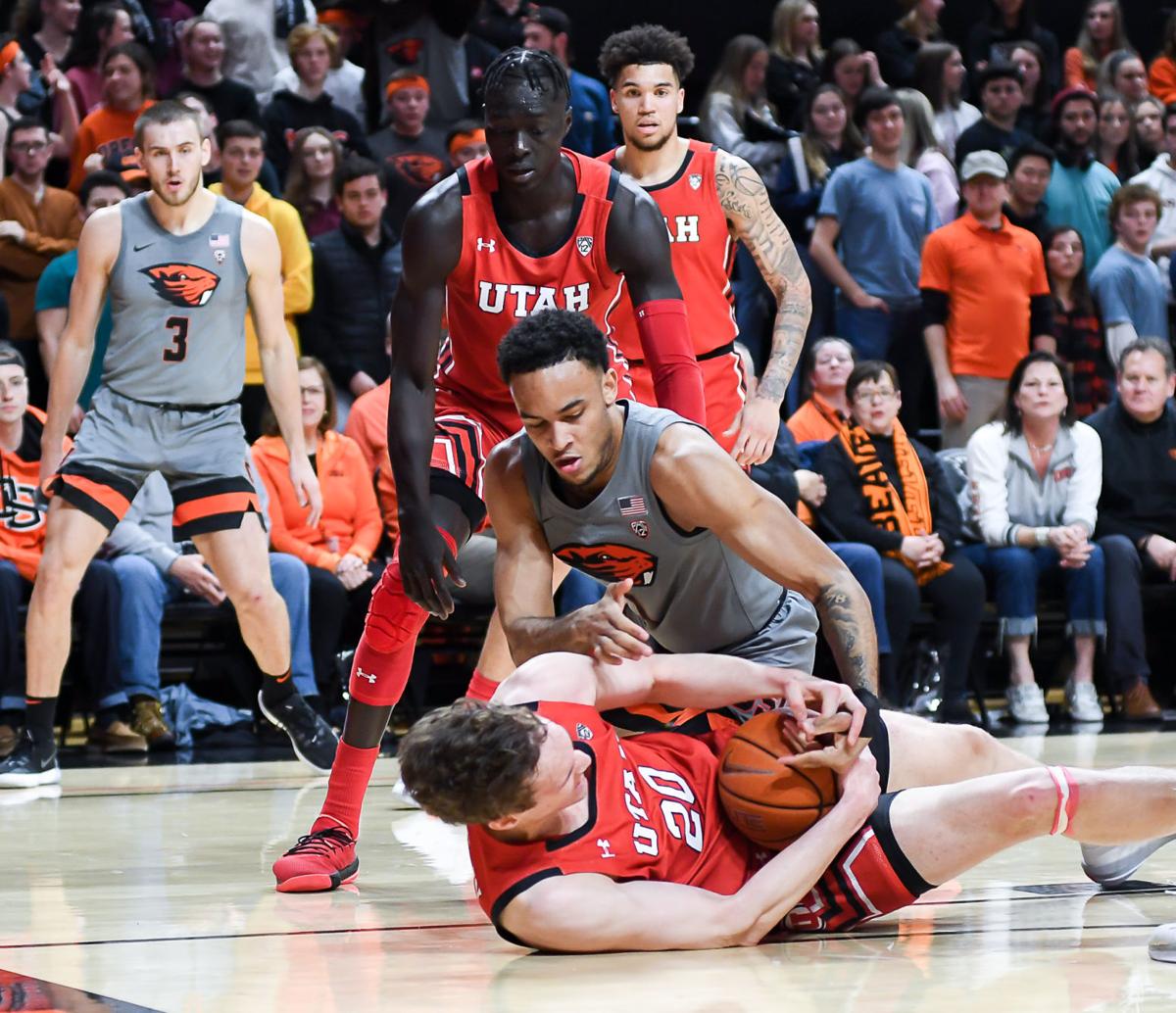 The Utah run that anyone would have expected to materialize at some point Thursday night given the competitive nature of Pac-12 men’s basketball this winter never came.

Oregon State kept its defense turned up throughout to run away to its second straight conference win for the first time this season.

The Beavers combined that with their best shooting game in nearly a month, including a boost from the 3-point line, to get a 70-51 victory at Gill Coliseum.

“I thought tonight the difference was our guys’ effort, and we just kind of wore on them,” Beavers coach Wayne Tinkle said. “Now we’ve got to put them behind us and we’ve got a tough one coming on Saturday. “But we’re thrilled with the effort tonight.”

OSU gets a 16th-ranked Colorado squad that will be salty after Thursday’s 68-60 loss at No. 17 Oregon and probably hasn’t forgotten about the Beavers’ 76-68 comeback win at Boulder on Jan. 5.

Sophomore forward Timmy Allen, the Utes’ leading scorer who had 25 in an 81-69 win against the Beavers in the Jan. 2 conference opener in Salt Lake City, was held to six points on 3 of 8 shooting. Four of his points came in the final five minutes, long after the game had been decided.

Oregon State never let Utah get comfortable after the visitors made their first two baskets.

OSU missed six of its first seven shots and trailed 5-2 before making seven of their next nine shots and take a 23-11 lead on Sean Miller-Moore’s conventional three-point play with 9:12 left in the half.

In that stretch, Thompson hit two 3-pointers and Jarod Lucas another. Thompson had three assists, including on the Lucas deep ball. Lucas was fouled on a 3 and made all three foul shots then assisted on the Miller-Moore basket that put OSU into a double-digit lead for good.

Utah put up 42 points in the second half of the teams’ first matchup. But the Utes never made a serious threat.

“I think our defense, especially these last two games, our defense has been at a whole different level,” said Lucas, a freshman guard, when asked about the success. “And that’s something we need to keep on going for the rest of the Pac-12 and after into the postseason.”

Oregon State was coming off a 63-53 home win against rival Oregon five days earlier. The Ducks shot 40% from the field, the Beavers’ best defensive mark in seven games and Oregon’s lowest scoring output of the season.

Thursday, OSU got some help from the 3-point line, an area that hasn’t produced many good results in recent weeks.

Coach Tinkle said the message to the players has been that the deep shots need to come inside-out passing from the post or on drives to the basket. That execution paid off Thursday.

“I thought we settled a few times, but all in all, that was a big step in the right direction as far as shooting that thing,” the coach said. “We know we’re capable of it, so it was good to do that and give us a little confidence moving forward.”

The Beavers got at least one field goal from nine different players and rarely missed a beat when going to the bench. OSU shot 24 of 51 overall (47.1%).

“Everybody on the team can score the ball when we play together and get good shots,” said freshman guard Gianni Hunt. “That’s all that matters, shots are going to fall eventually.”

Kelley, a 7-foot senior, shot 7 of 10 from the floor, with five of those field goals on Thompson lobs for easy dunks or layins above the basket.

It was Kelley’s best scoring output in the past seven games, and in the last 11 contests his ninth double-digit scoring game and highest rebounding total.

“Kylor’s been big. When he screens like that and sprints to screens and sprints to the rim on the roll, boy it puts opponents in a tough spot,” coach Tinkle said. “Ethan was unbelievable with finding him at the rim. Kylor, he’s a difference-maker when he’s locked in mentally and physically.”

Oregon State wasn’t going to win Saturday night shooting like it did.

Kylor Kelley led Oregon State with 16 points and nine rebounds. Kelley was 7 of 10 from the field with five dunks or layups above the basket in OSU's 70-51 win against Utah.

Oregon State's Ethan Thompson drives to the hoop in the first half. Thompson had 13 points and 11 assists for the Beavers.