It was seven years ago this month when Leigh Rubin got the initial idea.

Now, most of Rubin's ideas get channeled into "Rubes," the cartoon panel he creates that appears daily in this newspaper and on more than 400 media outlets worldwide. But this idea was different: He was thinking about reality TV shows.

"All these reality shows are on TV," he said, and they cover all sorts of different topics and delve into the lives of interesting (and sometimes, not-so-interesting) people.

Yet there was a gap in these shows, fertile ground left uncovered. It was an injustice, really.

"No one's done anything with a cartoonist," Rubin thought. And he knew exactly what to do about it.

Or, rather, he knew whom to contact about it.

Rubin, who lives in California, is friends with Ryan Johnson, the proprietor of NewRuleFX, a company in Van Nuys that specializes in making props for movies and TV productions. If you need to find, say, a six-pack of those breakaway bottles that you can shatter over somebody's head without causing physical injury, this is the place to go. (Rubin has since become considerably more familiar with these breakaway bottles, but we'll get to that later.)

More to the point, Johnson has experience in television production: He was the creator and executive producer of "American Dragster," the ESPN reality show that followed drag racers.

Rubin shot Johnson an email pitching the idea. Johnson was intrigued, but thought that the idea needed considerably more work, and gently called Rubin's attention to a sad truth about cartoonists:

"To be really honest," Rubin said, "a cartoonist's life is not really that exciting."

Eventually, though, the idea morphed into something a little more exciting: Rubin and Johnson set out to tell stories about creative people and how they get inspiration. "That's way more interesting than my life," Rubin said.

The overall idea is to explore how creative people find sources of inspiration, and to mesh that in some ways with Rubin's own cartooning work. So the pilot episode includes animated bits featuring Rubin's drawings of people and, of course, cows. So many cows.

In fact, 101 of them: This episode documents Rubin and Johnson's participation in the San Luis Obispo Cow Parade, a charity event in which artists crafted 101 (for Highway 101) life-sized fiberglass cows that eventually were auctioned for charity. Rubin's goal, working with Johnson, was to shape and paint the fiberglass bovine so that it resembled one of the cows that frequently is featured in "Rubes."

Their final creation was "Adventure Cow," a caped wonder with appropriately bulging eyes that takes flight in one of the show's animated segments. Adventure Cow also takes flight in a live-action segment of the pilot, in which the cow somehow is attached to a zip line and goes zooming out over the landscape. Among other adventures: the cow goes surfing and accompanies Rubin on a polar-bear plunge. "It was a blast," he said.

With one episode in the can, Rubin and Johnson hope to create a full season's worth of "Drawing Inspiration" before they start shopping the series around. And, in fact, a deal with a broadcaster or a streaming service isn't necessarily needed to draw in viewers — although such a deal could offer the effort some financial backing. So far, he said, "this is all out-of-pocket."

As diverting as the creation of "Adventure Cow" is, highlights of the first episode include close-up looks at the desk where Rubin does his work and the inside glance we get at Johnson's prop shop, where Rubin twice gets the business end of one of those breakaway bottles. "Never gets old, does it?" he says on camera as he picks pieces of bottle from his hair.

Rubin has a new gig that should assist considerably in his search for additional inspiration: He's been named cartoonist in residence at the Rochester Institute of Technology in New York, which gives him a chance to rub shoulders with other creative people and get ideas for future episodes.

"We're completely free and open," he said about what shape those future episodes might take. "We control where this goes right now."

"I want to be amused and educated," he said about his goals for the show, but he wants to do it with a light touch. "My whole thing is to make things lighter. We've got enough heavy stuff going on." (mm)

Mike McInally is editor of the Democrat-Herald and Gazette-Times. You can contact him at mike.mcinally@lee.net. 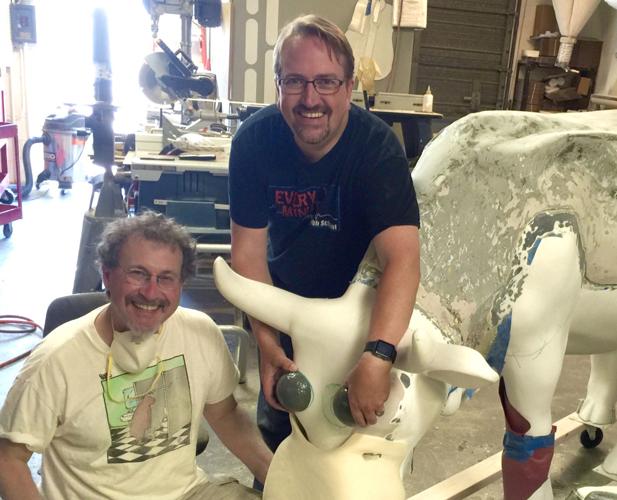 Leigh Rubin, left, and Ryan Johnson are shown in the midst of work on "Adventure Cow." The cow features prominently in the first episode of "Drawing Inspiration," a new show Rubin and Johnson have launched. 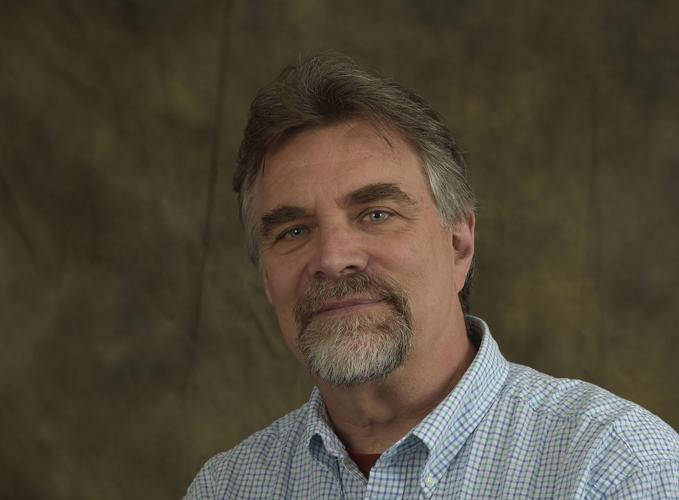