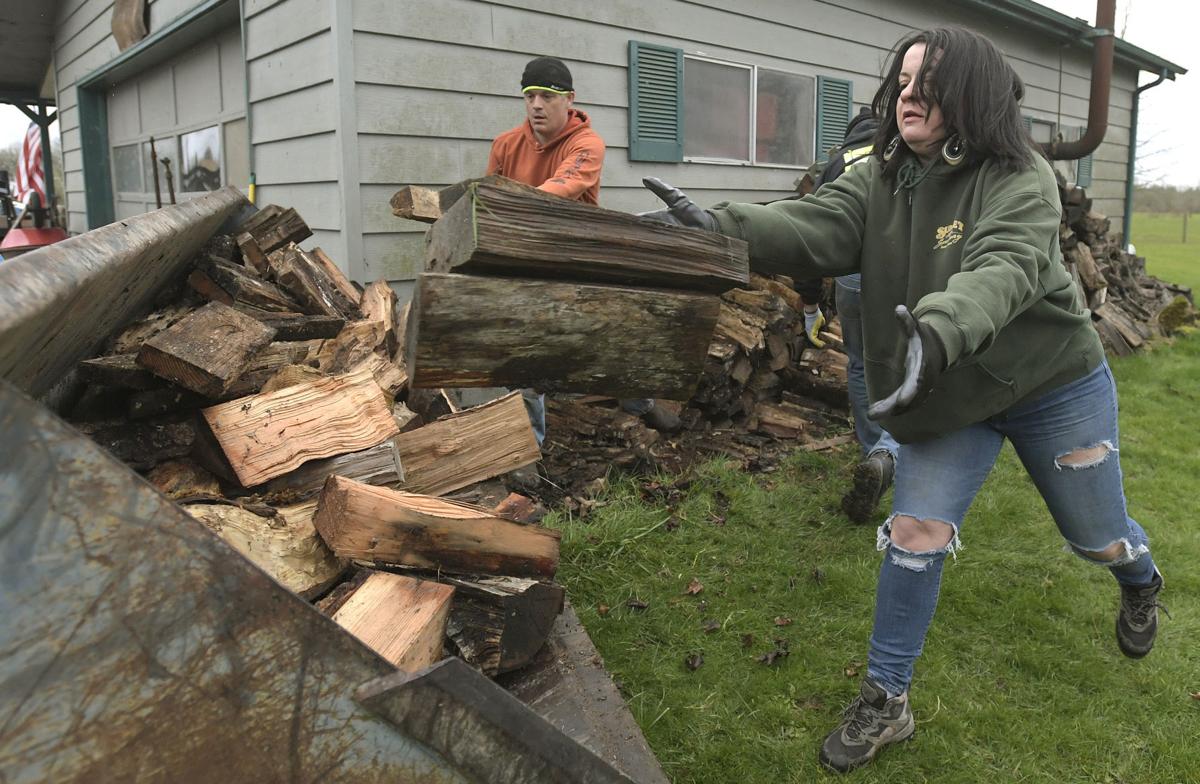 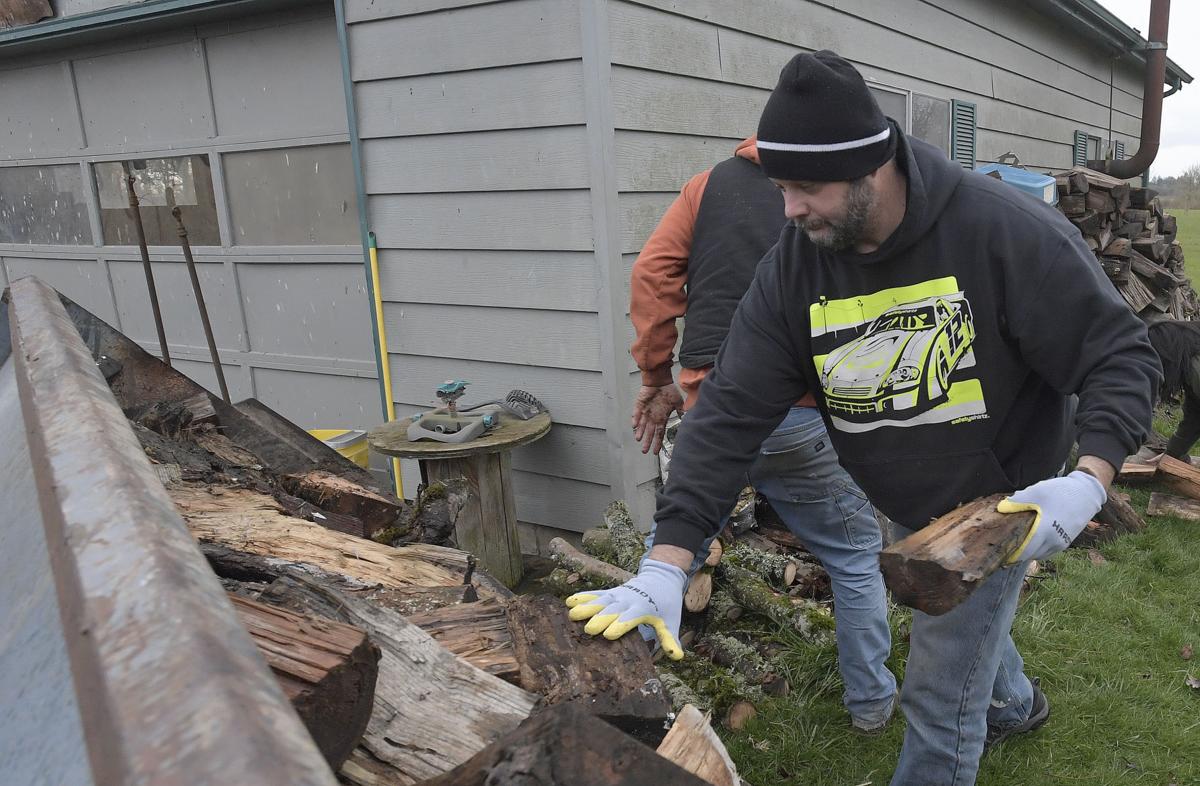 Mike Sweere loads a bucket of firewood to be donated to storm victims from Salem to Portland. 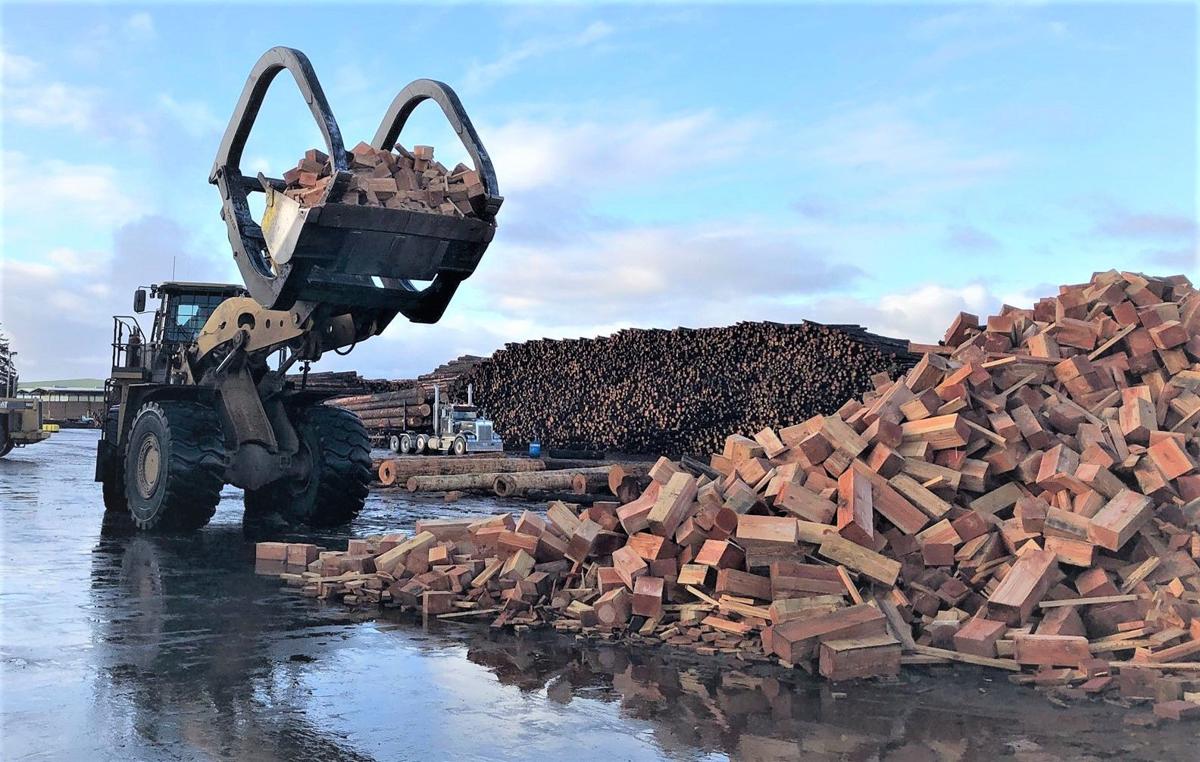 Firewood is loaded at Seneca Jones Timber Co. in Eugene for delivery to families affected by the recent ice storm.

Members of Timber Unity throughout the mid-valley have teamed up to deliver more than 30 cords of firewood to families affected by recent weather-caused power outages.

Timber Unity Secretary Angelita Sanchez of Sweet Home said the project started last Wednesday, when a board member who lives in West Linn asked President Mike Pihl if he might have access to firewood for her and her neighbors, who had been without power for several days.

Since then, Timber Unity members have delivered more than 30 cords of firewood valued at between $200 and $250 per cord, and more deliveries were planned on Monday.

Marc Whisenhunt of Tangent was among those delivering wood on Friday, and he said he was planning to get more wood together for delivery this week.

“There are also lots of downed logs to buck up,” Sanchez said.

“Plus, we’ve been working through local county commissioners and state representatives,” she said.

At its peak, more than 350,000 Oregonians were out of power, from Portland into the northern half of Linn County. Monday, the Pacific Power website noted power had been returned to 98% of those affected in the company's service area. Consumers Power planned an outage on Tuesday in the Scio area so power poles can be replaced.

Monday morning, Timber Unity members picked up a load of firewood from Seneca Jones Timber Co. in Eugene and delivered it to the Woodburn location of Love INC, a faith-based nonprofit. The wood will be distributed from there to families without power.

Monday afternoon, the dump truck picked up another load that was taken to the Clackamas County Fairgrounds for distribution.

Firewood can be picked up at the following locations:

Timber Unity was founded in June 2019 to oppose a carbon cap and trade bill proposed in the Oregon Legislature. The group now has 60,000 members representing logging, timber and mill companies, farmers, trucking companies and other mostly rural businesses.

A photo caption with the original version of this story contained incorrect information about the owner of a property where members of Timber Unity collected firewood for distribution to people affected by ice storms. That error has been corrected.

Ice is gone, but cleanup remains in mid-valley

Although Portland took the brunt of a Valentine’s Day weekend snow and ice storm that rolled into Oregon through the Columbia River Gorge, Lin…

Mike Sweere loads a bucket of firewood to be donated to storm victims from Salem to Portland.

Firewood is loaded at Seneca Jones Timber Co. in Eugene for delivery to families affected by the recent ice storm.