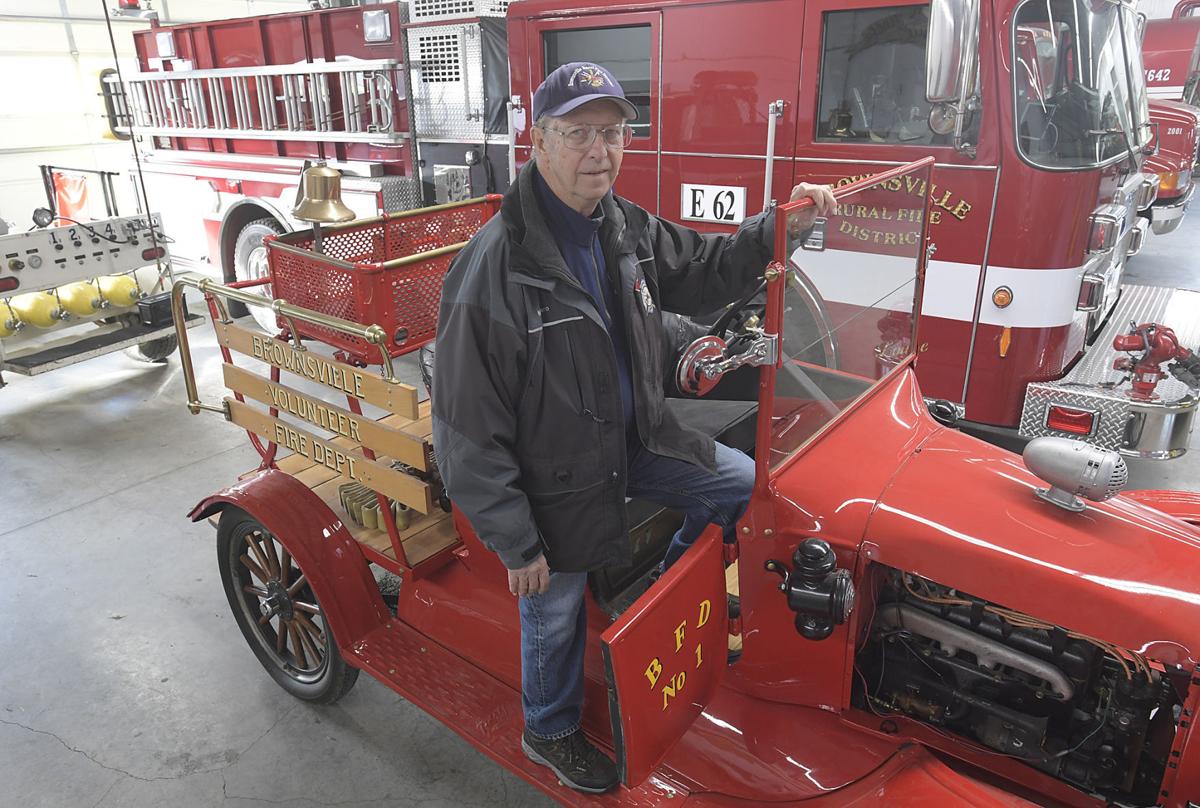 Neal Karo, who has spent 60 years as a firefighter with the Brownsville Rural Fire District, enjoys representing the district by driving a Model-T painted as a fire engine in parades. 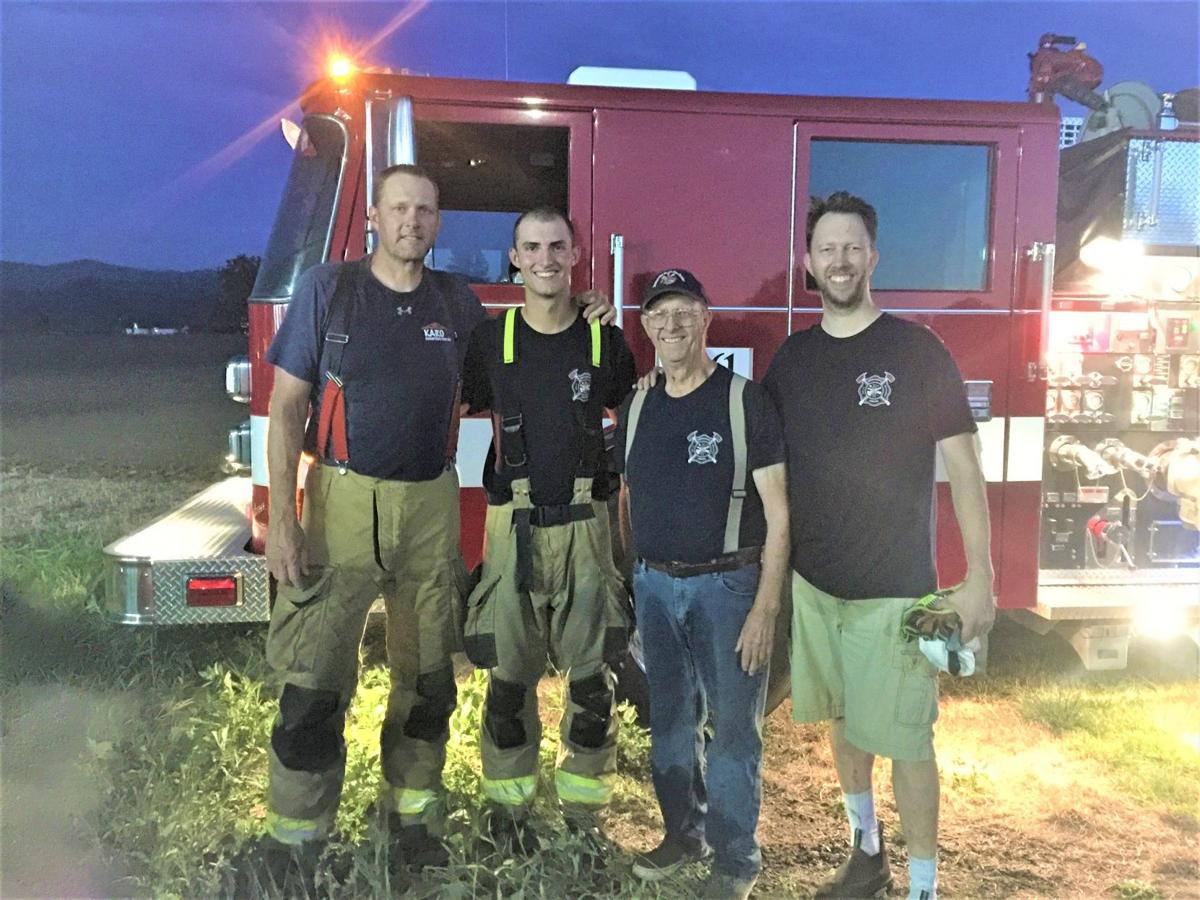 Firefighting is a family affair for the Karo family. From left to right: Todd, Tucker, Neal and David Karo. 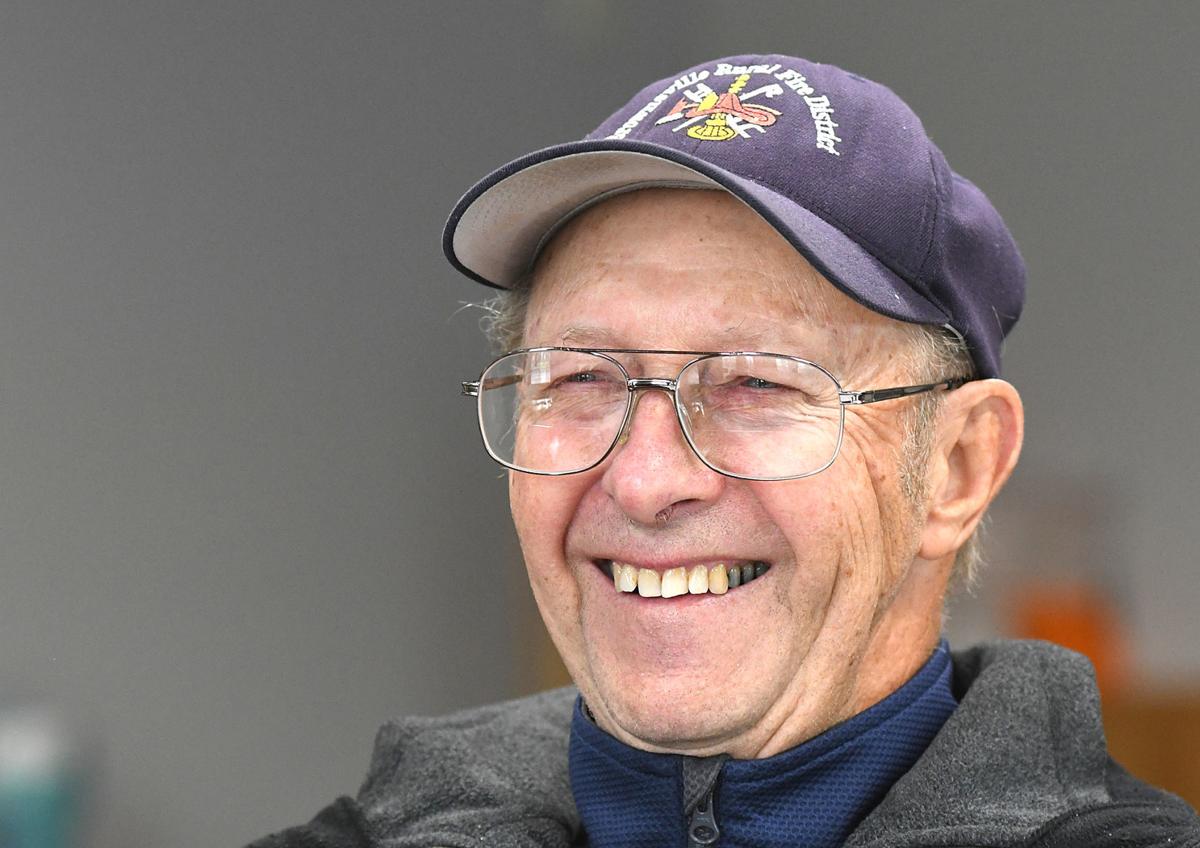 Neal Karo's mother told him to help out with a Brownsville fire in 1959. He's been at it ever since.

BROWNSVILLE — A wise man always listens to his mother.

Neal Karo did just that on Sept. 23, 1959 and the community of Brownsville has been rewarded by his commitment to the Brownsville Rural Fire District ever since. That day marked the start of Karo’s 60 years as a volunteer firefighter.

“There was a fire in town and she told me to ‘Go uptown and help those firefighters.’” Karo recalls.

He has answered fire calls ever since, even during the days when he was serving in the Air Force in Mississippi and Burns, Oregon. He would respond to calls when he was home on leave.

Capt. Karo, whose sons Todd and David and grandson Tucker, 20, all have followed in his footsteps, has no plans to hang up his turnout gear any time soon, although he admits that at 79 he now takes a role that's more behind-the-scenes.

“I’ve answered calls every year for 60 years,” Karo said. “I just like helping people. That’s what it is all about. Helping to make someone’s worst day a little better. I also like the camaraderie of being a firefighter.”

Things were a lot different 60 years ago, Karo admits.

“We didn’t have much training and we certainly didn’t have any turnouts,” Karo said. “We got a helmet and an old coat. We had to buy our own gloves and boots.”

The types of fire has changed over the years, Karo said.

“Back then, farmers left the straw in their fields until they burned it off,” Karo said. “Between harvest and when they field-burned, we had lots of grass fires. We had a lot of daytime calls.”

“We had three baler fires this year,” Karo said.

Karo said today’s firefighters are much better trained and equipped than when he started.

Karo said that his second week as a firefighter he and another volunteer were at the fire hall while other volunteers had responded to a fire.

“I remember when we got our first turnouts,” Karo said. “They cost $200 per firefighter and the district board didn’t think we could afford them. Now, they cost $2,500 or more.”

Karo said 60 years ago, it was common to pick up someone walking along the street to help fight a fire.

“We used to ride on the tailboards; we didn’t have air packs,” Karo said.

There have been eight fire chiefs since the fire district was founded in 1932. Karo has worked with five of them, starting with Ernest Cochell in 1959.

“He had been a firefighter at Camp Adair during World War II and knew his stuff,” Karo said. “But he wasn’t really good at teaching others. We were lucky that most of the volunteers were farmers and loggers and knew their way around equipment.”

He has since worked with Jerry Anthony, Rick Petersen, Roger Dorsey, Tim Frost and Kevin Rogers.

Rogers has been with the district 26 years and has been chief for the last 19 years. He is the district’s only full-time paid employee.

“Neal has taught me everything I know,” he said. “As long as I keep the coffee going, he’s great.”

Karo has responded to big and small fires, but especially remembers the former Snyder Mill fire west of Brownsville and the Wilcox Seed Mill fire near Harrisburg, both of which lasted all night.

“We’ve had some good saves over the years,” Karo said. “The Corner Café fire (in 2011) was a big one. I always worried that if that block got started, we would lose the whole thing.”

Karo said it is becoming increasingly difficult to get volunteer firefighters. The district has 22 and could use twice that number, he said.

Karo said that he, Ken Warden and Wayne Grant were the district’s first EMTs.

Firefighting isn’t all work, Karo said. He enjoys driving the district’s 1923 Model T in the annual Pioneer Picnic Parade and lighting off 4th of July fireworks since 1966.

Karo said he is extremely proud that his sons and grandson are volunteers.

And they are proud of him as well.

Grandson Tucker Karo said he grew up around the fire hall.

“I remember grandpa and dad leaving for calls and wishing I could go with them so when I was finally old enough to join I did,” Tucker Karo said. “Not too long after that I moved in as a resident at Brownsville and then became an intern for Lebanon fire. Grandpa has been a huge influence on my decision to pursue this as a career and also a massive wealth of knowledge.”

Tucker Karo said that anytime he has a question, he calls his grandfather.

“We will spend hours at the station going over equipment and procedures and he always has a story or two as examples,” Karo said. “He was a fireman before firemen were glorified, and tells me every day that he keeps coming back because the community is in need.”

Karo said that even when fire training meetings get loud, “everyone listens up when grandpa talks. There are no exceptions because they have such respect for him. He’s a man that I am working to become, but I don’t know if that is even possible.”

In addition to his community service as a firefighter, the elder Karo has been active for decades at Holy Trinity Catholic Church, the Knights of Columbus 8624 and the Pioneer Picnic Association, where he is a past president.

Claim to fame: Has been a volunteer firefighter for 60 years

Lebanon Fire District replacement bond will be on the November ballot

The Linn County Clerk's Office will soon begin mailing out ballots for the Nov. 5 general election.

The Story Next Door: Corvallis woman retires after 33 years as housekeeper at retirement center

Louise Pugh doesn’t know exactly what she’ll do with her retirement.

Neal Karo, who has spent 60 years as a firefighter with the Brownsville Rural Fire District, enjoys representing the district by driving a Model-T painted as a fire engine in parades.

Firefighting is a family affair for the Karo family. From left to right: Todd, Tucker, Neal and David Karo.

Neal Karo's mother told him to help out with a Brownsville fire in 1959. He's been at it ever since.