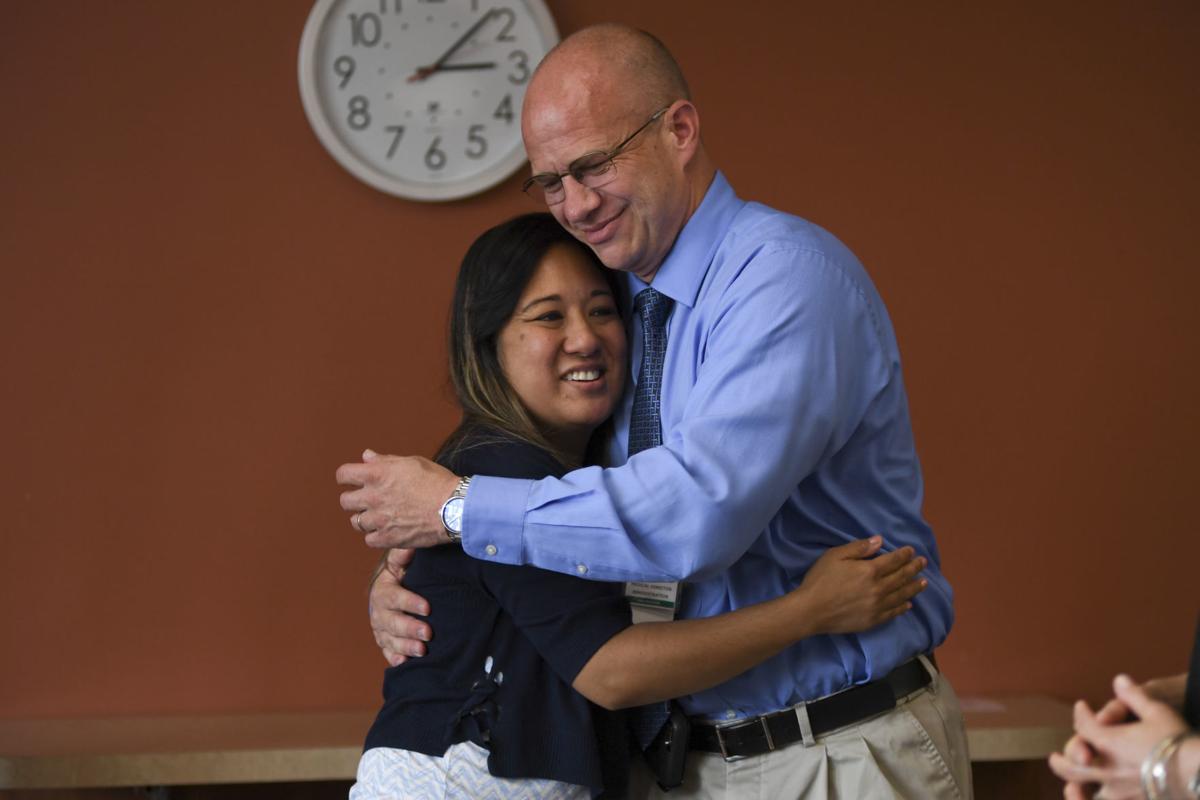 Gwen Guzon hugs Dr. Russell McUne, one of the doctors who treated her after her stroke April 21, at a reunion at Samaritan Albany General Hospital last Tuesday. 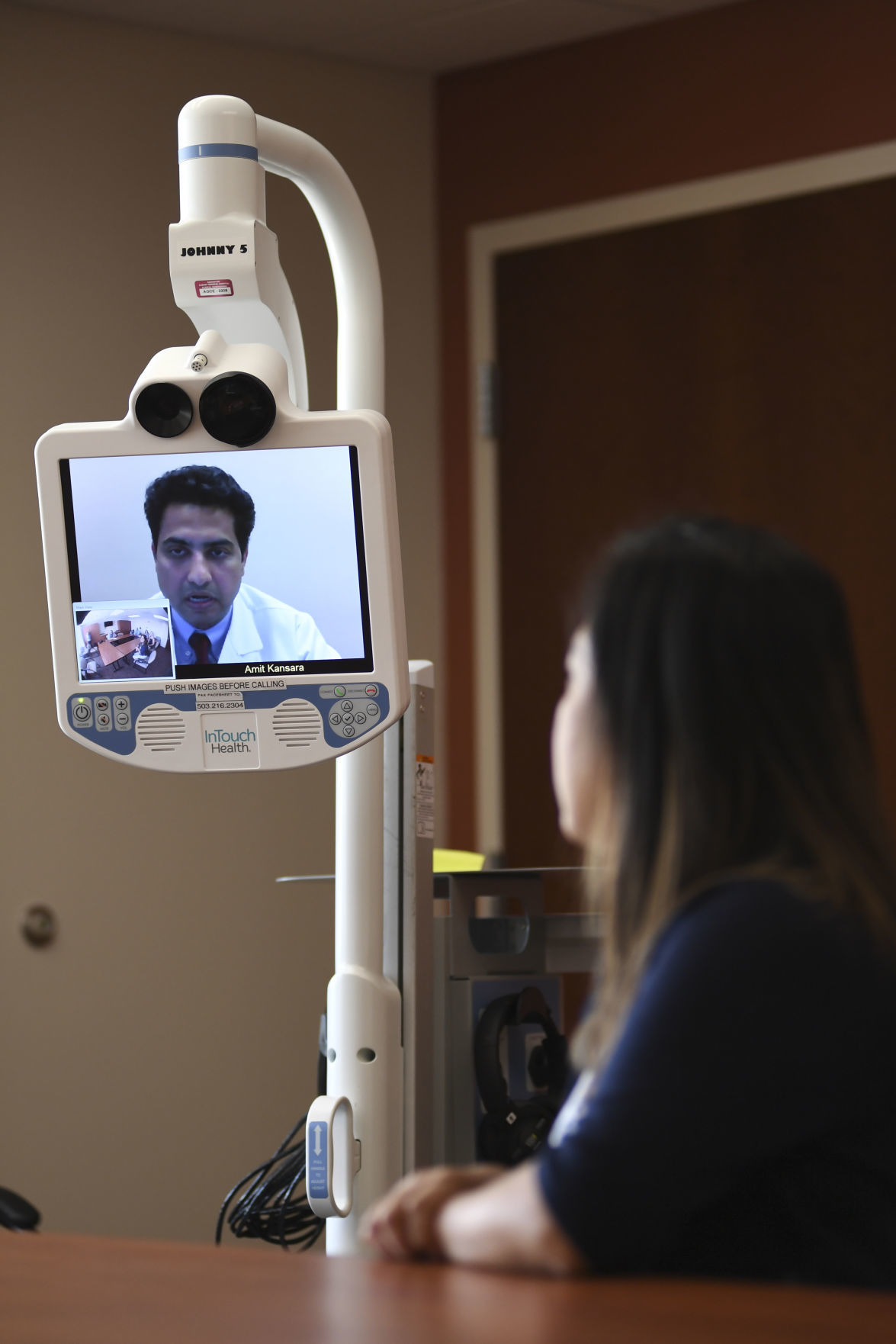 Dr. Amit Kansara communicates Tuesday via a Telestroke robot during a reunion between Guzon, right, and the doctors who treated her after her  April 21 stroke. 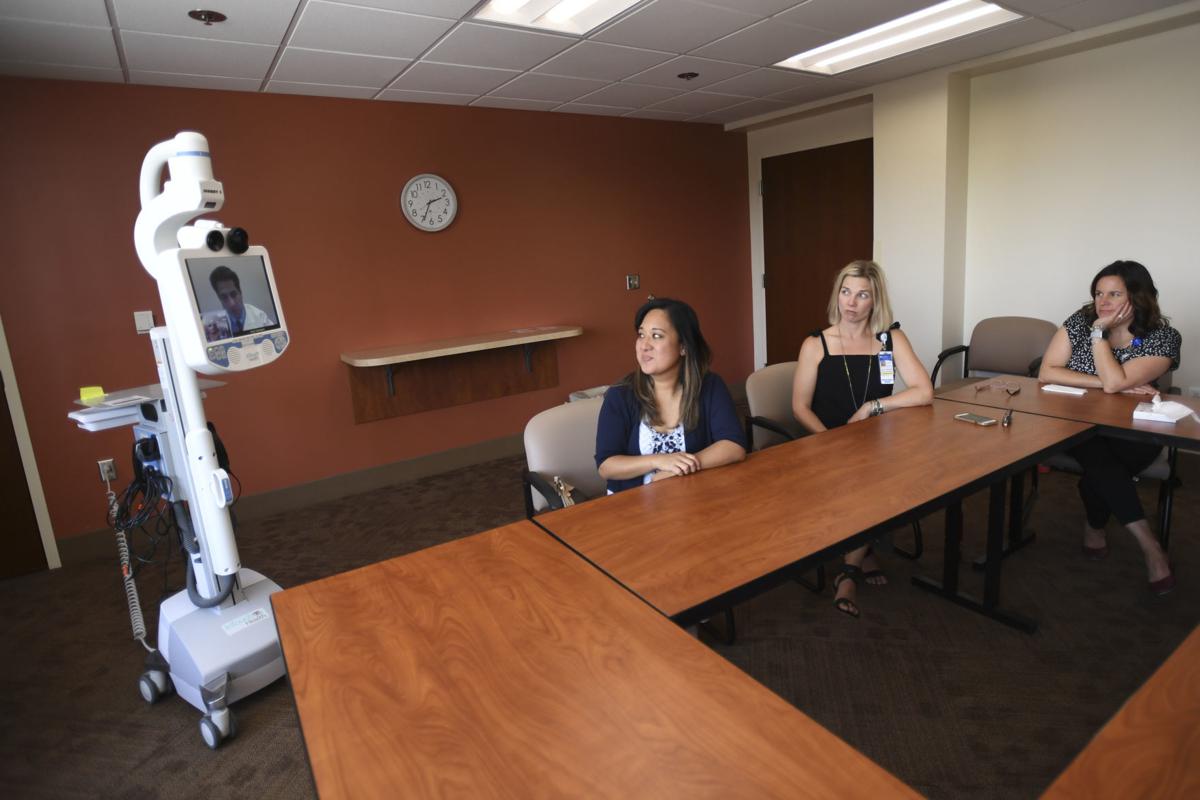 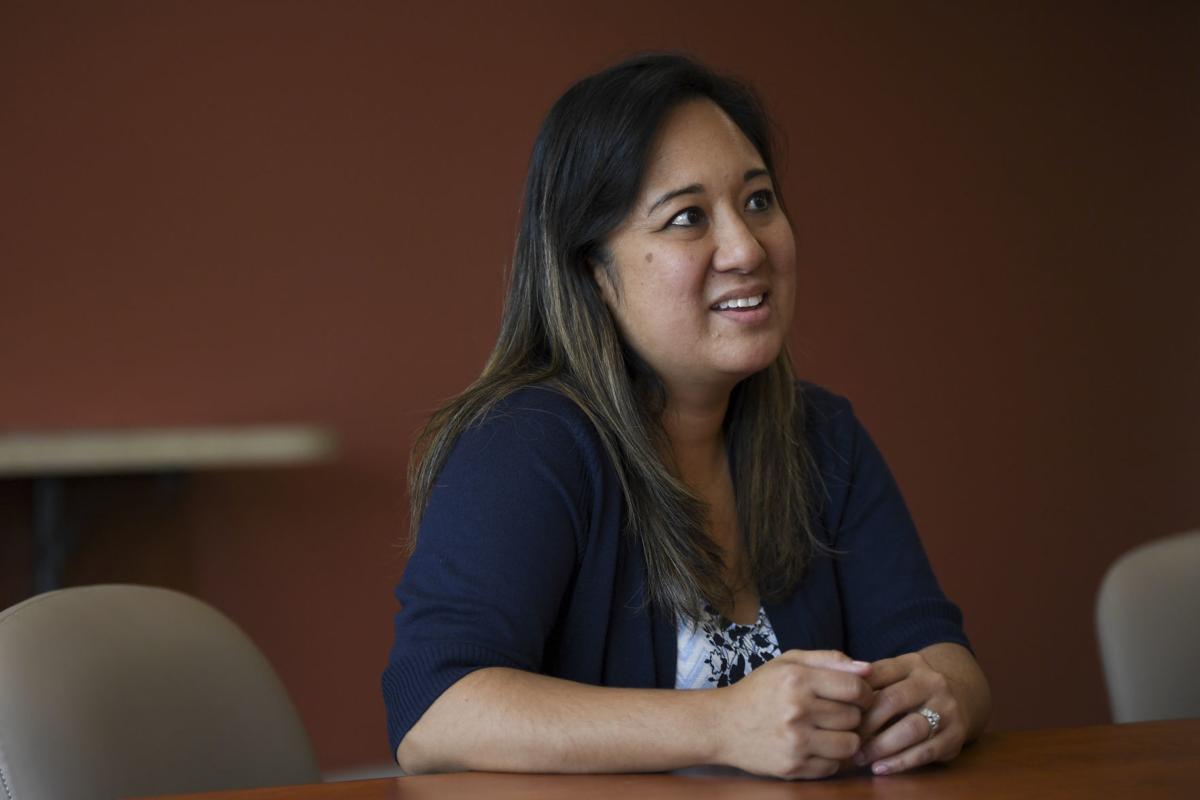 Gwen Guzon suffered a stroke April 21 and was initially treated at Samaritan Albany General Hospital and by neurologists at Providence Medical Center via a Telestroke robot.

That’s when the 43-year-old mother of two from Lebanon experienced a massive stroke while working at Kohl’s.

Not every member of Guzon’s medical team was in the local hospital conference room. Kansara, a stroke neurologist with the Providence Stroke Center in Portland, shared the moment via a Telestroke robot that played a vital role in Guzon’s treatment.

For the last 18 months, Samaritan Health Services hospitals in Albany, Corvallis, Lebanon, Newport and Lincoln City have been among 22 hospitals in Oregon and a couple in Washington that use robotic technology to analyze stroke patients’ symptoms and greatly reduce the amount of time needed to treat them.

Oregon Health and Sciences University also has a similar program in place.

Stroke specialists can use the robot, which features a high-definition camera and video screen to analyze patients near or far. And with strokes, every second is vital. The faster a stroke victim can be treated with a clot-busting medication, the less brain damage occurs.

The robot is controlled by neurologists at Providence.

Guzon was coming off break at her job at Kohl’s in Albany when her stroke story began.

She was talking with co-worker Amanda Bowen about nail polish, when Bowen asked her if she felt OK.

But Bowen insisted she wasn’t and radioed associates to get a wheelchair and call 911.

“A customer saw what was happening and asked me to raise my arms in the air,” Guzon said.

But that's all she remembers until she awoke at 2 a.m. the next day at Providence Medical Center, surrounded by her family. She was told she had undergone surgery to remove a large blood clot — 3 to 4 millimeters — on the right side of her brain.

McUne said that without modern clot-busting medicine called Tissue Plasminogen Activator and the use of the Telestroke robot system, it is likely Guzon would have spent the “rest of her life in a nursing home, if she survived.”

As soon as the Samaritan team received communications from the medical unit, McUne ordered tPA medicine from the hospital pharmacy. Within 30 minutes, McUne’s team had performed CAT scans that were sent to Providence stroke specialists via the robot, administered the medicine and Guzon was in the air headed for surgery in Portland.

McUne said when the Providence stroke specialists reviewed Guzon via the Telestroke robot, they knew immediately she needed to be transferred.

The Telestroke video is so accurate, specialists can scan a patient’s pupils. “The resolution is amazing,” Kansara said. “We can check a patient’s speech, their vision and monitor their blood pressure.”

Kansara’s team can assess a patient by showing them drawings and asking them to describe what they see or to read sentences.

McUne said the Telestroke system provides doctors who don’t deal with strokes on a daily basis with a valuable tool in assessing patients and helps them make a vital decision about whether to administer the clot-busting medicine.

“There is a 5 to 7 percent chance of death associated with this medicine,” McUne said. “We used to do this over the telephone, but now, with complex patients, it is extremely effective in making judgment calls on whether to use the medicine, because in up to 30 percent of cases, the patient’s symptoms are actually mimicking strokes and aren’t the real thing.”

McUne said administering clot-busting medicine in those instances could be fatal, because it could lead to extreme bleeding if the patient has had recent surgery or a bleeding ulcer.

Manley said the technology and protocols are in place at all of Samaritan’s hospitals, so residents of rural areas have the same opportunity for care as urban residents.

Samaritan and Providence stroke specialists talk weekly about patient care. The Albany hospital sees about 180 patients and 92 had a clot-type stroke.

Systemwide, there were 1,000 stroke patients last year and of those cases, about 500 involve a blood clot.

Manley said that last year, the Samaritan Health System treated 52 patients with the clot-busting medicine in 2016; in 2017, the number increased to 83.

Samaritan Albany General Hospital treated six patients in 2016 with the medicine; in 2017, the number was 18.

“Our partnership with Providence has given us the confidence to treat those patients that historically providers would not have treated,” Manley said.

“Emergency room doctors in small hospitals may see a couple of major stroke patients per year,” McUne said. “Telestroke technology can greatly speed up transfer times. The system helps me back up my decision to use or not use the clot-busting medicine. It has probably made a difference for five or six patients in the last year.”

Guzon’s clot was removed via surgery through an artery in her leg, so she has no physical marks or scars on her head.

Guzon said she was in the hospital only two days and she went back to work 10 days after her surgery, but quickly realized that was too soon.

Guzon and her husband, Troy, have two daughters, Kianna, 15, and Kelsey, 13, and they lead active lives.

“I’m not used to being the person getting helped,” she said. “I usually do the helping. I run the kids and their friends around. I think about what would have happened had I not lived. But today, we haven’t changed our lifestyle.”

Guzon’s medical team doesn’t know what caused her stroke. She is young and healthy. She is going to wear a heart monitor to see if she might have had irregular heartbeats and to assess future risks.

“She has a slim, but not zero percent chance of having another stroke,” McUne said.

Guzon said she is grateful for the care she received and for getting a second chance at life.

“My life has changed in that I don’t take it for granted anymore,” Guzon said. “I was watching the movie ‘I Can Only Imagine’ and it hit me that I was given a second chance thanks to Dr. McUne and others. I have learned to enjoy life more. I don’t get mad at the little stuff anymore.”

The American Stroke Association developed this easy-to-remember guide to help identify the signs of a stroke.

F — Face drooping. Is one side of the person’s face drooping or numb? When he or she smiles, is the smile uneven?

A — Arm weakness. Is the person experiencing weakness or numbness in one arm? Have the person raise both arms. Does one of the arms drift downward?

S — Speech difficulty. Is the person’s speech suddenly slurred or hard to understand? Is he or she unable to speak? Ask the person to repeat a simple sentence. Can he or she repeat it back?

T — Time to call 911. If any of these symptoms are present, dial 911 immediately. Check the time so you can report when the symptoms began.

• Stroke is the fifth leading cause of death in the United States, occurring in more than 700,000 patients per year. It is the number one cause of disability.

• Up to 80 percent of strokes are preventable.

• A stroke can happen to anyone of any age at any time.

• There are nearly 7 million stroke survivors in the U.S.

Biden: Economy rebuild is 'a marathon', not sprint

Cat is 'whiskered' away from Scottish polling station

Cat is 'whiskered' away from Scottish polling station

An outbreak at an Albany church is raising questions about the oversight of COVID-19 social distancing guidelines at faith-based institutions.…

A 43-year-old Linn County woman was Oregon’s 2,497th COVID-19-related death, it was announced by the Oregon Health Authority on Saturday. In t…

Family members of Sherry Zetzman, including her mother Terry Bushnell, her father Lee Bushnell, and her sister Crystal Bushnell, speak out abo…

Twenty-eight mid-valley schools have active COVID-19 outbreaks, according to the most recent data from the Oregon Health Authority.

Neighbors of a proposed 12-acre solar farm east of Albany are voicing opposition to the project.

A 66-year-Scio man was killed Friday in a head-on collision near Turner.

By tiny fraction in metrics, 15 counties moving out of extreme COVID-19 risk

The indoor dining ban and other major restrictions under COVID-19 rules will be lifted Friday for 15 counties because a key metric was missed by .1%.

As the 2020-2021 school year draws to a close, both Greater Albany Public Schools and the Corvallis School District have announced a changeove…

Crash closes northbound lanes of I-5 north of Exit 216

One northbound lane of Interstate is blocked just north of Exit 216, OR 228 Halsey-Sweet Home Highway, by a rollover crash, according to the O…

Gwen Guzon hugs Dr. Russell McUne, one of the doctors who treated her after her stroke April 21, at a reunion at Samaritan Albany General Hospital last Tuesday.

Dr. Amit Kansara communicates Tuesday via a Telestroke robot during a reunion between Guzon, right, and the doctors who treated her after her  April 21 stroke.

Gwen Guzon suffered a stroke April 21 and was initially treated at Samaritan Albany General Hospital and by neurologists at Providence Medical Center via a Telestroke robot.