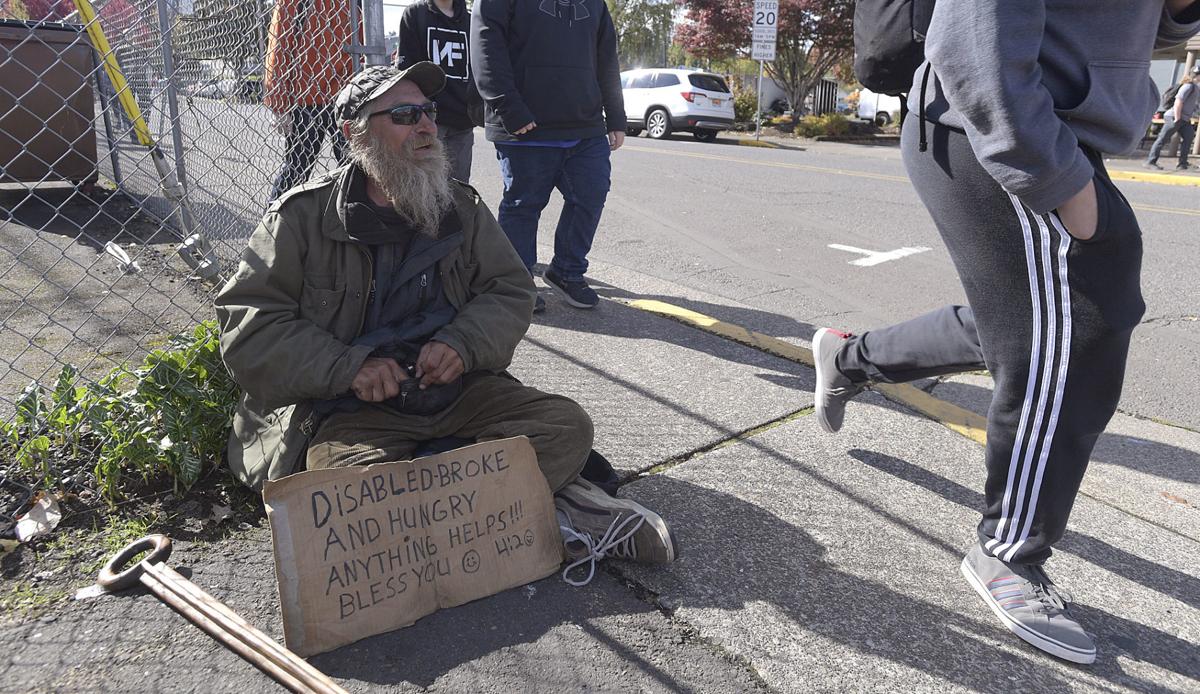 High school students walk by Dirk Bock, 48, as he reaches in his fanny pack for a smoke while sitting on a fence line on 15th Avenue in Sweet Home. Bock said he understands the exclusion debate, but hopes the city would concentrate its resources in creating a homeless shelter in Sweet Home, noting there are two vacant buildings across 15th and Main Street near Safeway. 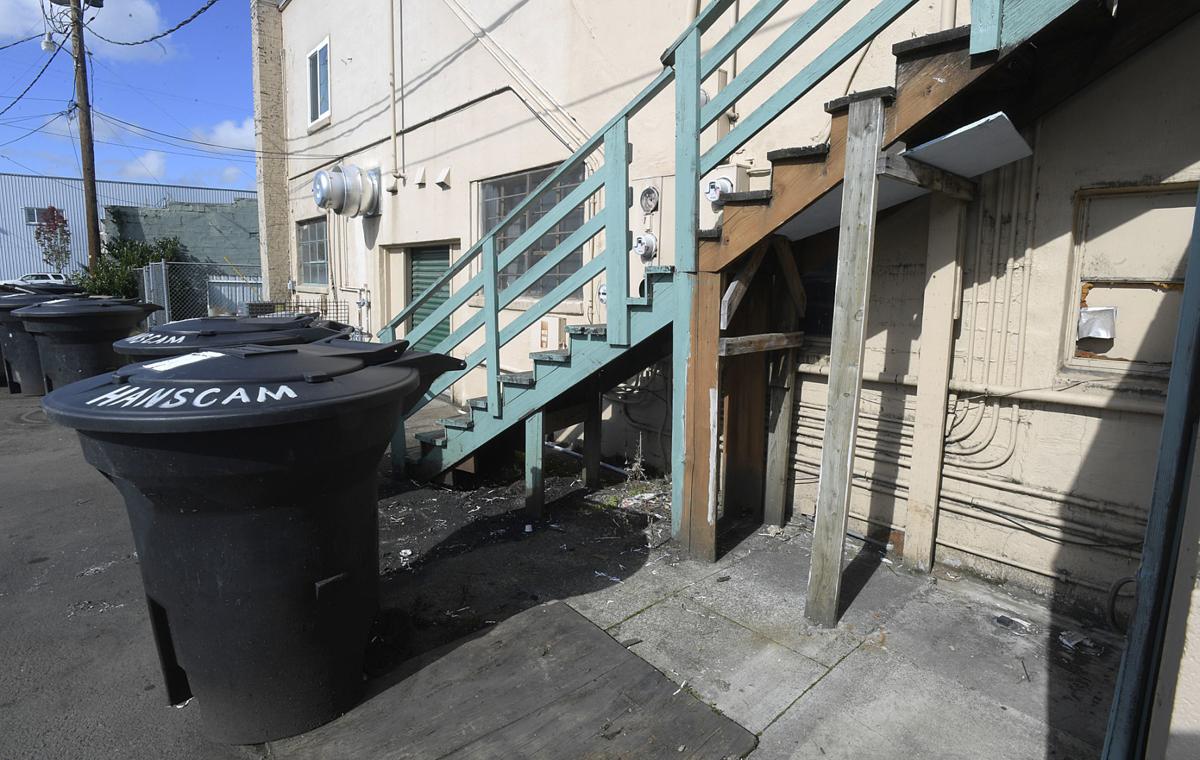 The owner of Figaro's Pizza told the Sweet Home City Council that her manager often has to pick up drug needles and trash found behind the Main Street shop. 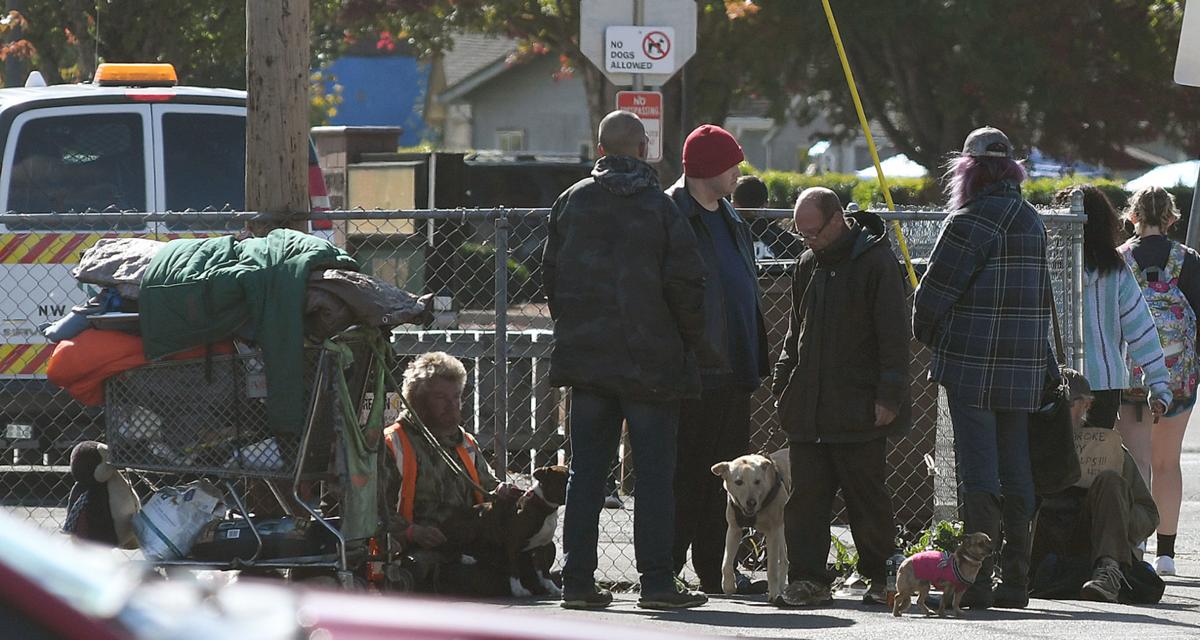 Men hang out at a fence line near Speedee Mart in Sweet Home in October 2019.

SWEET HOME — Some residents and business owners have had it with criminal activities in the downtown area, and they want the city to do something about the problem.

But not everyone who attended Tuesday evening’s City Council meeting believes a proposed enhanced law enforcement zone or “exclusionary” ordinance, which would prohibit serial offenders from being in the area, will work or be enforceable.

The issue has become so egregious that potential business developers have scrapped plans to bring shops to town and a farmers market has considered closing.

“Several people who wanted to operate a business here have left,” said business owner and community volunteer Kelly Kem. “That’s unheard-of. We have got to get a handle on this.”

Kem said it's reached a point that she has had to “cover my grandchildren’s eyes so they won’t see someone urinating or a couple having sex at the old video store. This is horrible in our sweet little town. It’s up to us to figure this out.”

Police Chief Jeff Lynn presented the council with a written description of how an exclusion ordinance might work, and emphasized that it isn't targeting only the homeless.

Lynn added, “The intent of the enhanced law enforcement area was to attempt to address frustrations over illegal activity that repeatedly occurs in downtown Sweet Home. This proposed ordinance is not about homelessness and it’s not about solving the issue of homelessness. It’s about public safety.”

The ordinance would provide the Police Department with a tool to “exclude” someone from the affected area — Fourth Avenue east to 22nd Avenue, and Main, Long and Nandina streets — if they commit three crimes in a given time period.

Lynn used three people's criminal histories over the past year as examples of who might be excluded for anywhere from 30 to 90 days. Crimes included criminal trespass, consumption of alcoholic beverages in a public place, theft, and possession of a controlled substance.

There would be exclusion exceptions, such as visiting a relative, consulting with an attorney, attending alcohol or drug treatment programs, attending a religious ceremony and others.

Councilor Cortney Nash said the ordinance might only push people out of downtown and into residential neighborhoods, but, he added, “People are definitely fed up with this.”

Councilor Diane Gerson said the objective should be changing people’s behaviors and a more intensive community policing program might be more effective.

She said police officers should get out of their cars and talk face-to-face with business owners and people on the streets.

Councilor James Goble said the proposed ordinance will be difficult to enforce.

“You’re talking about people who don’t care,” he said. “The people who care are fed up with this.”

Mayor Greg Mahler, who owns a local business, said he's spoken with several other business owners and they're tired of the issues.

“They are sick of being harassed. We have lost businesses and will lose more if something isn’t done,” he said.

According to councilor Dave Trask, the issue has been “decades in the making.”

“This (proposed ordinance) is a start,” he said. “We cannot just sit here and do nothing. That’s unacceptable.”

Councilor Lisa Gourley said that for many of those affected, “One more ticket, one more fine doesn’t deter them. We are trying to impose our values on people that don’t always appreciate those things.”

Sweet Home resident Patrick Rogers said he used to live in a city with an estimated population of 60,000 homeless people.

“We have to do something to stop this,” he said. “Business owners need to feel safe, or they won’t want to build businesses here.”

Paula Newman, who owns the Figaro's Pizza in Sweet Home and Schmizza Pizza House in Lebanon with her husband, said the manager of her Sweet Home shop deals with homeless people on a daily basis.

“She said they will come in the shop and buy something so they can warm up and she is fine with that,” Newman said. “But they also do drugs behind the shop and leave needles. She has to clean them up, and that’s unacceptable.”

“Our landlord hired a security guard to reduce the number of drug deals going on,” Newman said. “The city enacted an exclusionary notice to reduce alcohol issues in the area. A trespass law was put into effect to reduce homeless camping and panhandling.”

Newman said the city also brought in a consultant on homeless issues to identify the population.

“What they found is that there is no single reason for homelessness,” she said. “Their circumstances vary greatly.”

City Manager Ray Towry said the issue has to be tackled regionally.

“We need compassion, but there also has to be enforcement. We are in the beginning stages of trying to figure out how to make this work,” he said.

The council will further discuss the proposed ordinance at future meetings.

“We want more public input so we can get a better understanding of what the community wants,” Lynn said.

A 35-year-old Lebanon woman is facing multiple charges in an alleged Corvallis carjacking.

High school students walk by Dirk Bock, 48, as he reaches in his fanny pack for a smoke while sitting on a fence line on 15th Avenue in Sweet Home. Bock said he understands the exclusion debate, but hopes the city would concentrate its resources in creating a homeless shelter in Sweet Home, noting there are two vacant buildings across 15th and Main Street near Safeway.

The owner of Figaro's Pizza told the Sweet Home City Council that her manager often has to pick up drug needles and trash found behind the Main Street shop.

Men hang out at a fence line near Speedee Mart in Sweet Home in October 2019.