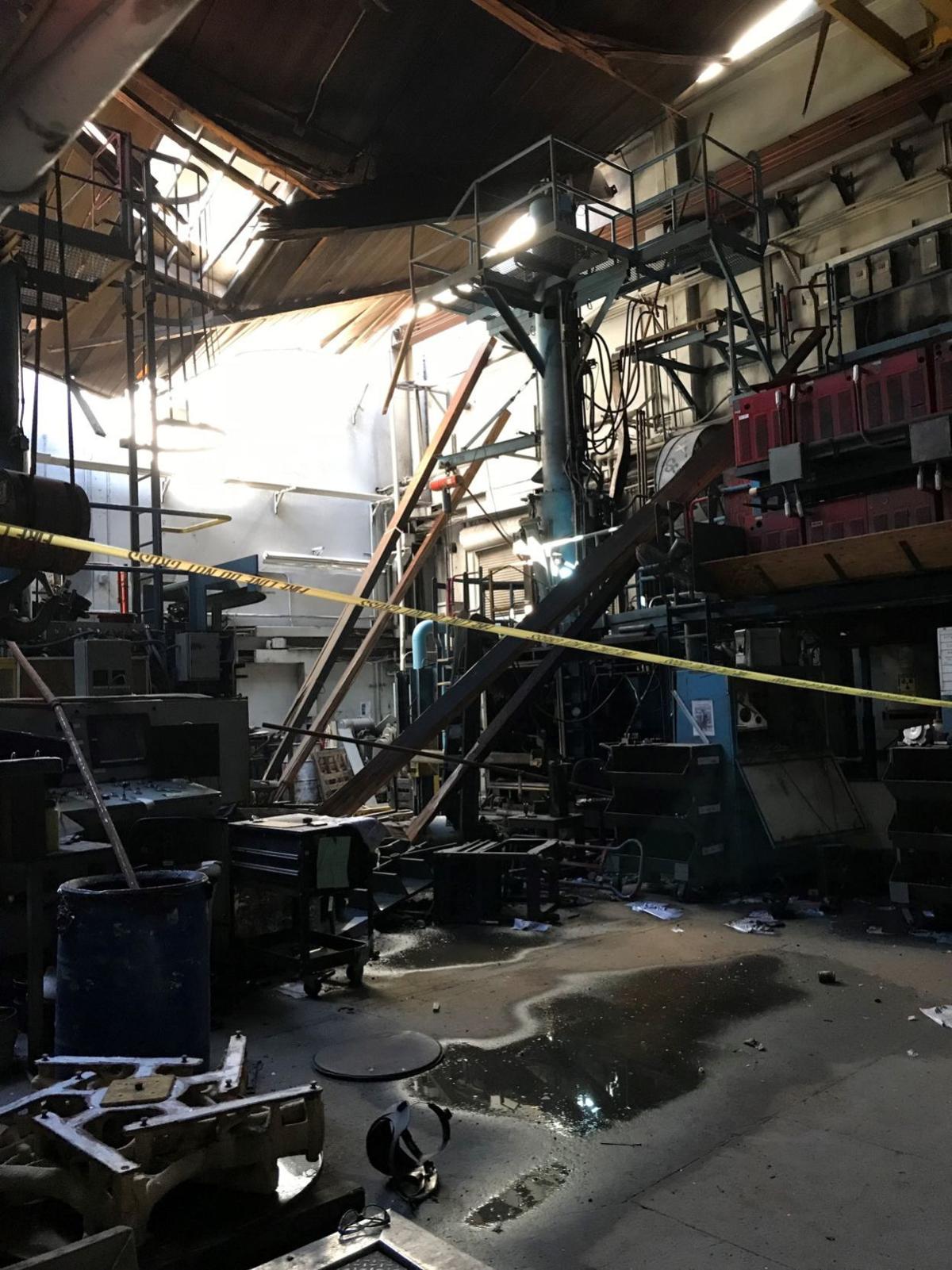 An August 15 furnace explosion at Selmet Inc. blew out part of a building's roof. Oregon OSHA has issued a fine of $27,500 due to safety violations that led to the explosion in which two employees were injured. 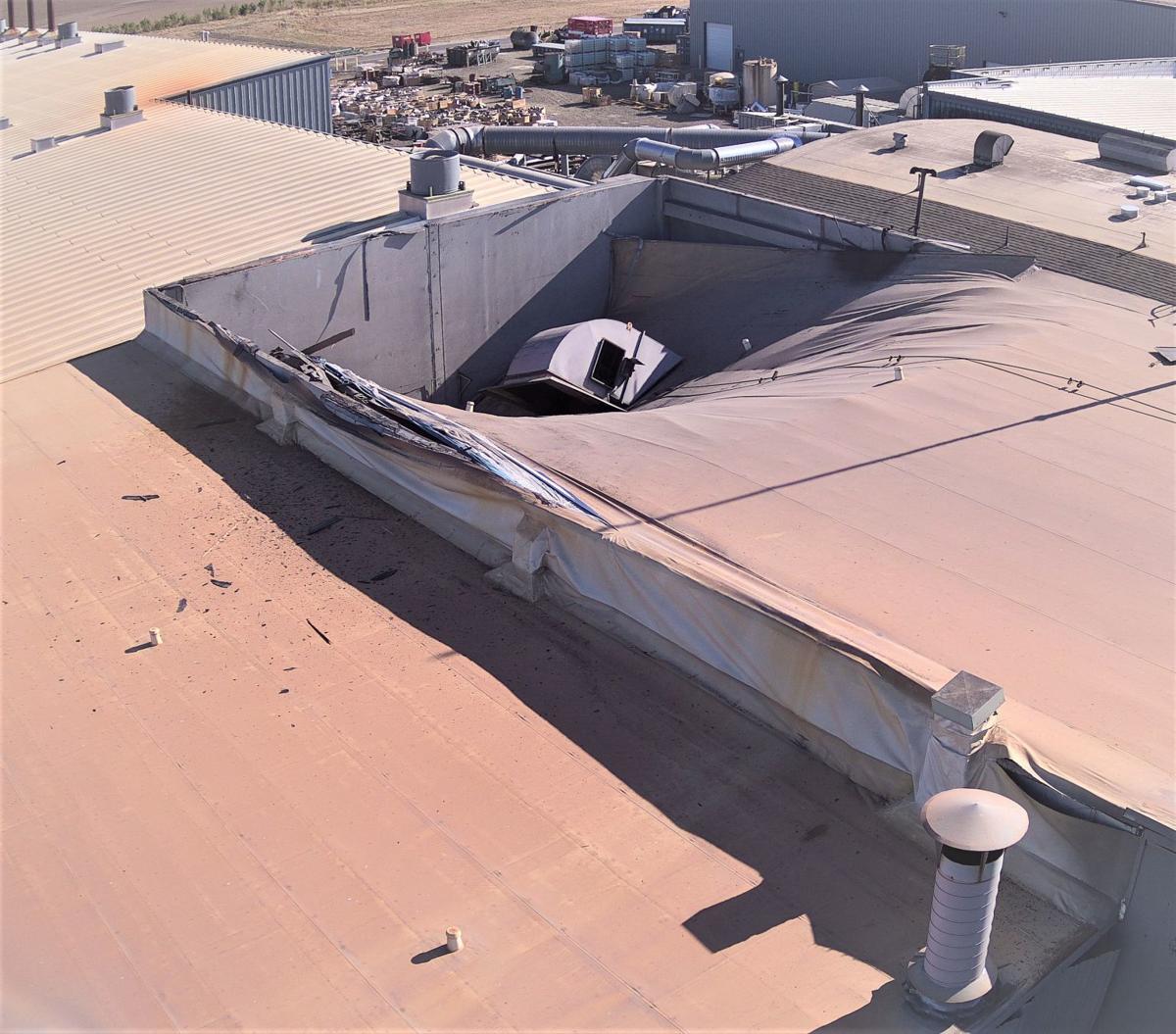 A portion of roof collapsed after an explosion and fire at the Selmet plant on Seven Mile Lane Aug. 15.

An Albany Fire Department truck extends its ladder over the Selmet facility south of Albany after an explosion at the plant on Aug. 15, 2019.

The accident occurred at around 7:53 a.m. on Aug. 19 at the Selmet plant, located at 33992 Seven Mile Lane southeast of Albany. It tossed one employee about 12 feet, causing second- and third-degree burns over 69% of his body. It threw another employee about six feet into a parts table, tore a steel door from its hinges and created a large hole in the building’s roof.

More than 30 firefighter/paramedics from the Lebanon, Tangent and Albany fire departments responded to the call.

Summer intern Samuel Anderton of Bend, who was outside of the building when the accident occurred, said at the time, “It rattled my ribs and shook the ground.”

The resulting Oregon OSHA investigation identified three serious violations, including failing to account for employee safety in the layout and design of the foundry and overlooking proper work clothing and equipment.

“There are concrete steps employers can take to make safety a meaningful part of the operation of a worksite,” said Oregon OSHA Administrator Michael Wood. “Neglecting such steps, as this case demonstrates, serves only to invite more risk and the severe consequences that frequently come with it.”

According to the Oregon OSHA report, titanium furnace operators John Bauch, Nick Barnett and Kenneth Schunn were working the day shift on Aug. 15, starting at around 5 a.m., in a 3,169-square-foot room where four electrically-powered titanium furnaces are housed. The furnaces melt the metal at 3,000 to 3,500 degrees. Water is used to cool the furnaces but can create an explosion if it comes into contact with the titanium.

At 7:53 a.m., Bauch was starting a melting process when he saw sparks “raining down” from the top of the furnace. He hit the "abort" button and stood up in front of the furnace to examine it.

Schunn, who was operating a different furnace, walked a few feet from his operator’s position to get a communications radio when Bauch’s furnace exploded. Schunn told Oregon OSHA investigators he was thrown 6 to 8 feet into a parts table. He said Bauch was thrown 10 to 12 feet. He dragged Bauch out of the area to safety.

Schunn was treated and released from Samaritan Albany General Hospital. Bauch was transported to Legacy Emanuel Medical Center in Portland, where he was treated for extensive burn injuries over two-thirds of his body. His current condition is unknown.

The explosion also threw a large steel door about 11 feet across the room and blew off part of the building’s roof.

According to Oregon OSHA, the furnace experienced a system failure. A metal bar fell, creating an electrical arc that perforated a water canister. The water came into contact with the molten titanium and triggered an explosion.

The agency cited Selmet for failing to account for safety measures in the design, layout and operation of the older furnaces. The report notes that such measures could include blast walls to protect against explosions, isolated control rooms or removal of employees from the risk zone during operations.

The company had installed such measures for newer furnaces, according to Oregon OSHA. That violation carries a $13,750 penalty.

The proposed fine of $27,500 reflects a 10 percent increase in the base penalties assigned to the violations due to Selmet’s history of nine reportable accidents in the last three years.

Oregon OSHA interviewed about three dozen people during the course of the investigation.

The company has 30 days to appeal the proposed fines.

Selmet Inc. manufactures specialty metal items used in the aerospace industry. It employs more than 800 people and has grown significantly since 2012, investing millions of dollars in expansion. The company was founded locally but was sold in 2011 to Blue Point Capital and then in 2018 to Consolidated Precision Products of Cleveland, Ohio.

Oregon OSHA is a division of the Department of Consumer and Business Services.

Consolidated Precision Products spokesman Richard Legenza said the company does not comment on the specifics of citations.

“The safety of our employees is our highest priority,” he said. “We have fully cooperated with OSHA during its investigation.”

An August 15 furnace explosion at Selmet Inc. blew out part of a building's roof. Oregon OSHA has issued a fine of $27,500 due to safety violations that led to the explosion in which two employees were injured.

A portion of roof collapsed after an explosion and fire at the Selmet plant on Seven Mile Lane Aug. 15.

An Albany Fire Department truck extends its ladder over the Selmet facility south of Albany after an explosion at the plant on Aug. 15, 2019.