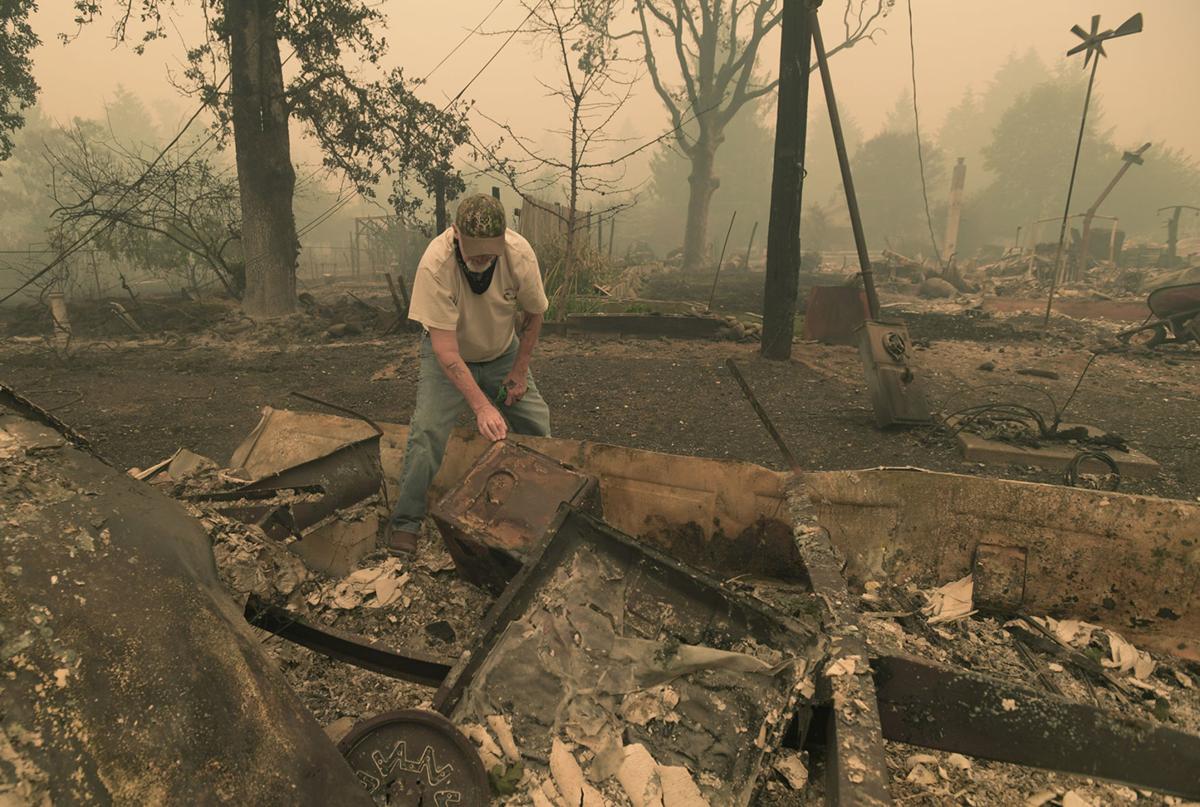 Robert Pylant locates his charred but otherwise intact fireproof safe in the rubble of his mobile home Wednesday morning in Gates. 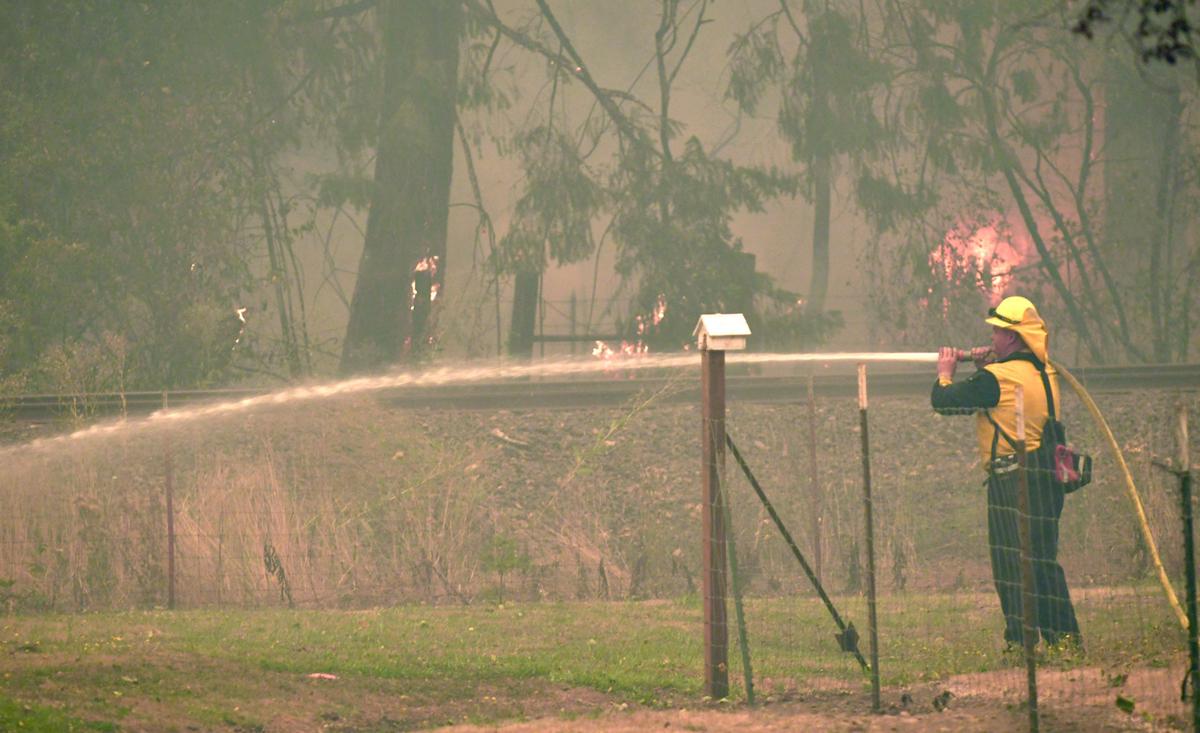 A firefighter from Boardman hoses a yard 3 miles east of Lyons as fire burns on the opposite side of the Albany & Eastern Railroad Tracks. 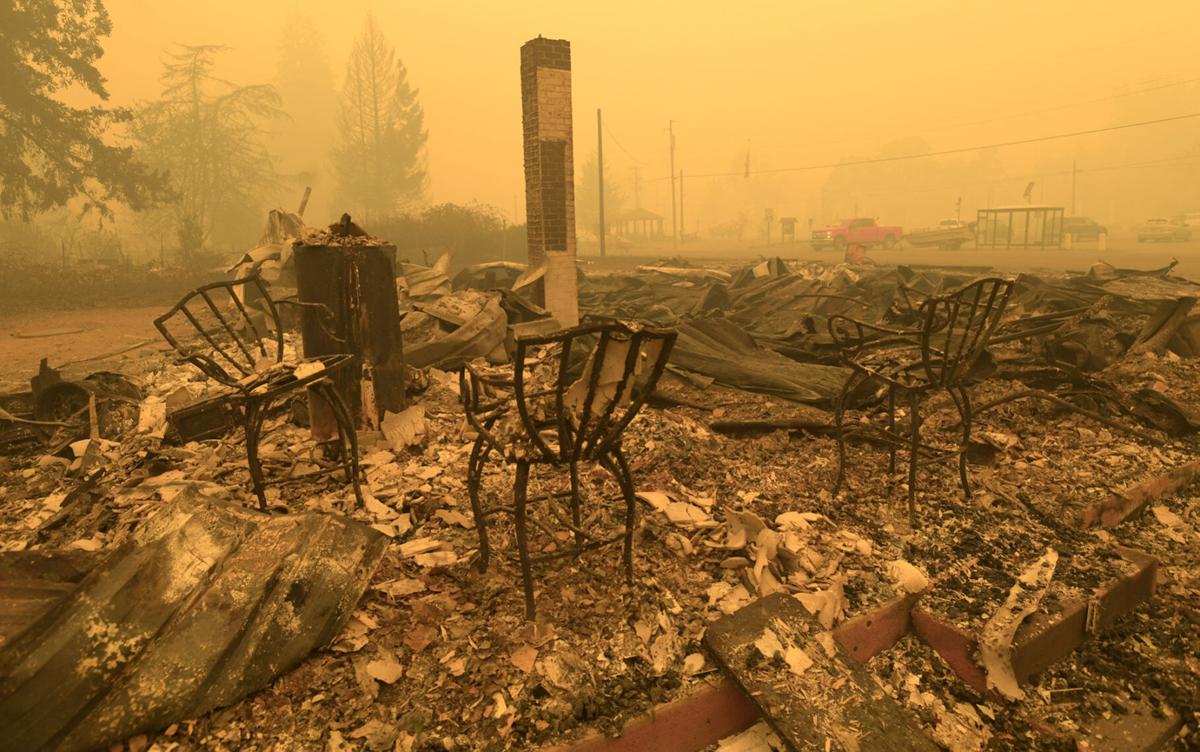 Three chairs and a brick chimney are all that remain at the Gates Post Office.

GATES — Wednesday morning, 65-year-old Robert Pylant searched through the charred rubble that was once his home at the Oak Park Trailer Park in Gates as curls of smoke slowly rose from the skeletons of many other mobile homes also consumed by fire Monday evening.

Pylant found the fireproof safe he was searching for and although it was scarred by the flames, it was still intact.

“My wife and I were just getting into bed when we heard banging on the door. It was our son telling us to get out,” Pylant said. “Then, our landlady came over and was yelling for us to ‘get out now!’”

Every trailer in the park and a small motel on site were reduced to piles of ashes and twisted metal. The skeletons of cars and trucks — with no glass or tires remaining — stood where they were parked before the community was engulfed by flames Labor Day afternoon.

“I have no idea what to do now,” Pylant said. “I am a caregiver for my wife, who is disabled. We are staying at our daughter’s house in Salem. Only God knows what will happen now.”

Two people were confirmed on Wednesday to have died in the fire: 13-year-old Wyatt Tofte and his grandmother, Peggy Mosso, 71.

The family was trying to escape the fire at their home on North Fork Road near Lyons.

Smoke was thick throughout the community on Wednesday and smoldering railroad ties emitted a stomach-wrenching stench. A half-dozen metal mailboxes were resting in a row on the ground; the wooden post that once held them was nowhere to be found.

Gates firefighter Jacob Rothrock, 21, moved into a rental home near the trailer park a month ago.

“All I have left is my work gear,” Rothrock said. “It destroyed everything except my uniform and my telephone.”

Rothrock said fire district staff quickly determined they would not try to save any homes that were already on fire and would put their resources into fire prevention.

“We figured those homes weren’t savable,” Rothrock said. “We also wanted to keep the fire station safe, because without that, we couldn’t do anything.”

Rothrock said it was “pure luck” that City Hall, which is within yards of the trailer park, was not damaged.

“I’ve been a firefighter since 1987 and I’ve never seen anything like this,” Benjamin said. “Fortunately, no one (on the fire crew) has been injured.”

“They will be living at the station for a while,” Benjamin said as ash swirled around the fire district’s equipment staging area.

Appreciating their efforts, the local 7-Eleven store brought the firefighters numerous bags of donuts and a dozen frozen pizzas.

Near the Gates School, Ernie Brosis and some friends were clearing tree limbs from his driveway.

His home was spared, but only yards away, the school was a pile of ash, brick and twisted metal.

“My shop is gone and so is my neighbor’s shop,” Brosis said. “I was sitting on my deck and the wind came up. I heard a popping sound and headed for my rig. By the time I got into it, the fire was already coming through the fence.”

Brosis was going to use a portable generator to charge his freezer.

Nearby, in a parking lot, nine food trailers and two large dining tents were destroyed. They had been used in the staging area for firefighting teams battling the Beachie Creek Fire, now being called the Santiam Fire.

Hollie Golden grew up in the Mill City area and said her family’s home on Highway 22 was not damaged.

“Right now, we can see trees falling onto the highway and you can see the fire inside them,” Golden said. “Many homes are gone. There is a fire behind Frank’s lumber mill.”

Golden said the community’s historic Reid family house burned to the ground. The home was given to the city in 2016. The 3,000-square-foot home originally served as a hospital run by the community’s doctor, J.W. Reid.

Golden and her husband, Paul, are staying at their son’s home in Aumsville.

Wednesday afternoon, homes on the south side of Highway 228 southwest of Sweet Home were placed under a Level 3 "go now" evacuation order due to an aggressive fire on the Upper Calapooia River.

Linn County Sheriff Jim Yon said all homes on the south side of Highway 228 from Marcola Road to Holley were included.

“The wind has really been whipping up,” Yon said. “We are supposed to get some relief tomorrow.”

Linn County Commissioner Roger Nyquist said there are more than 350 people and many animals sheltered at the Linn County Fair & Expo Center.

“We have 50 motor homes, 150 cars and 25 trailers so far,” Nyquist said. “The generosity of community members is absolutely amazing.”

As of Wednesday afternoon, the Santiam Fire had grown to 130,000 acres and the Holiday Farm Fire (formerly known as the McKenzie Fire) near Blue River has grown to more than 30,000 acres. The Lionshead Fire that started near the Warm Springs Reservation in Central Oregon and spread into the Willamette National Forest is more than 105,000 acres.

The Linn County Sheriff’s Office received at least three calls concerning possible looting in the Lyons area. One incident involved blank checks, jewelry and money taken from a home. In another incident, an iPod and a McChicken sandwich were taken from a home near Neal Park.

The Holiday Farm Fire, originating in the Lane County community of Rainbow, is now causing the evacuation of Linn communities lying primarily between Brush Creek and the Calapooia River.

Wildfires burning in the Cascade Mountains and the foothills have caused numerous closures due to smoke, ash and extreme fire danger, includin…

Robert Pylant locates his charred but otherwise intact fireproof safe in the rubble of his mobile home Wednesday morning in Gates.

A firefighter from Boardman hoses a yard 3 miles east of Lyons as fire burns on the opposite side of the Albany & Eastern Railroad Tracks.

Three chairs and a brick chimney are all that remain at the Gates Post Office.