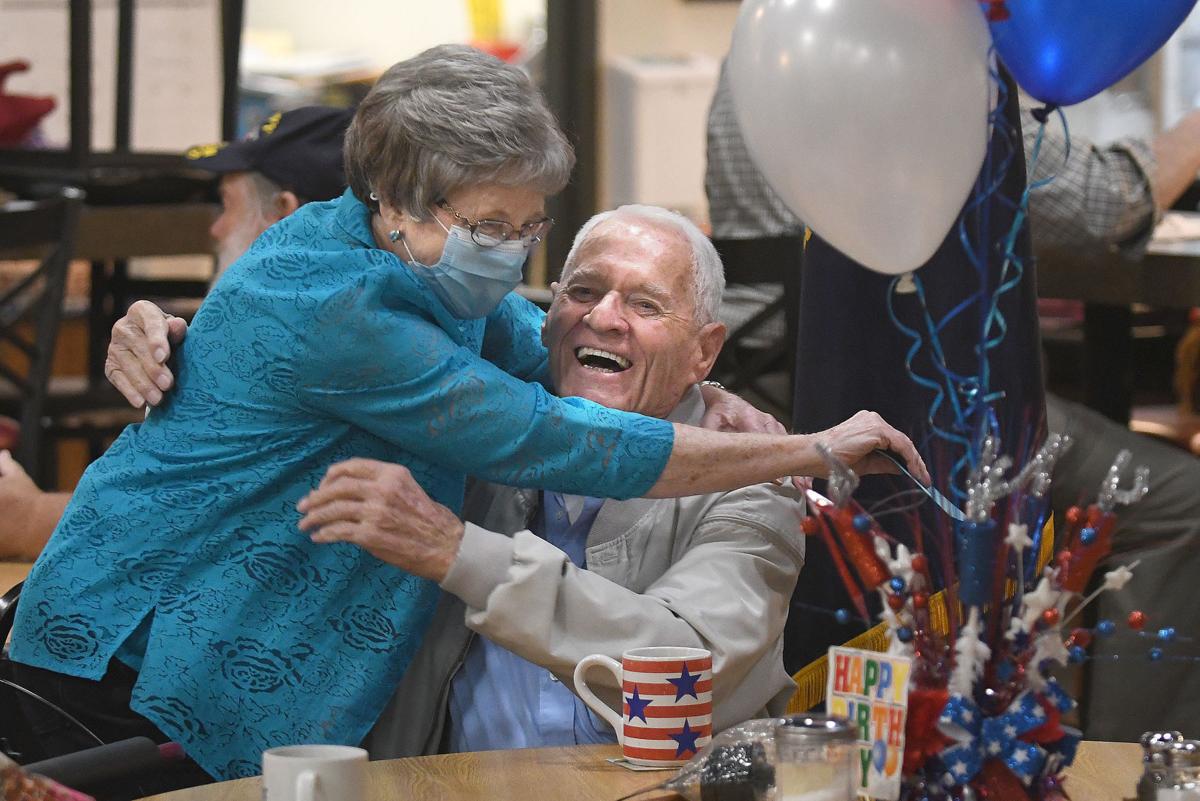 Centenarian David Russell gets a hug from friend Dorothy Dingman of Albany. The two became friends while exercising by walking around the Heritage Mall. 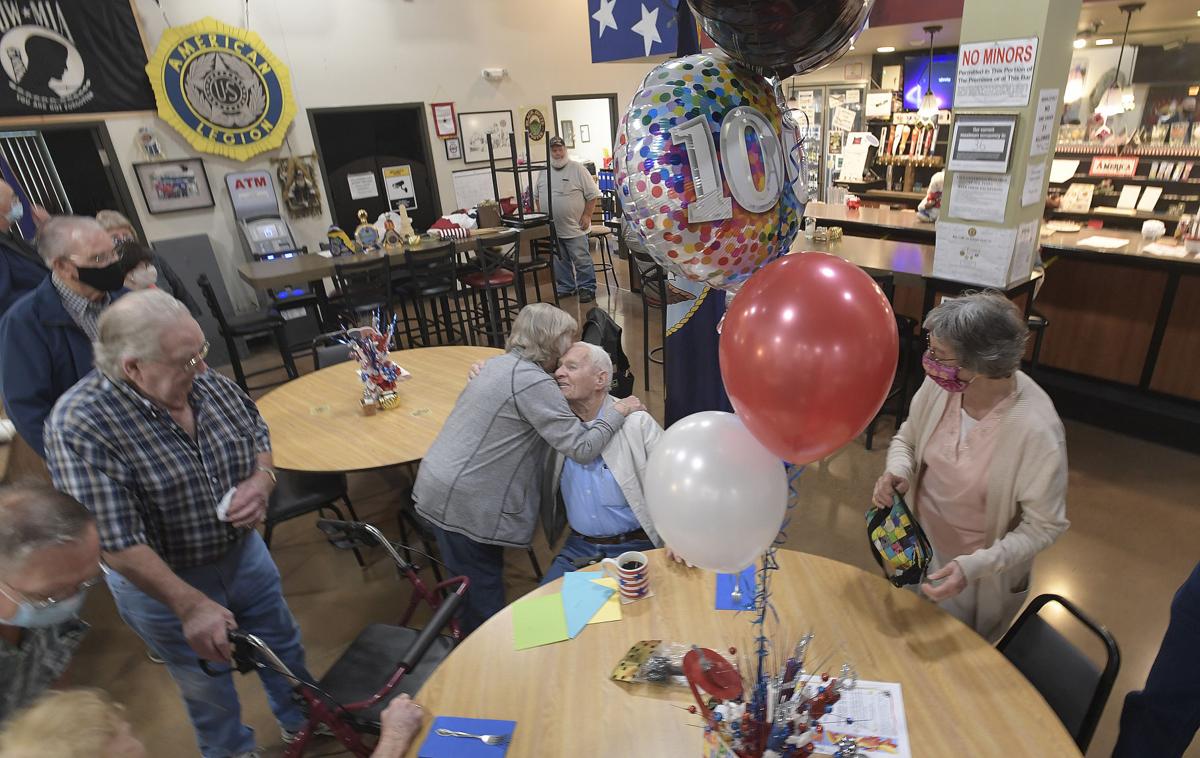 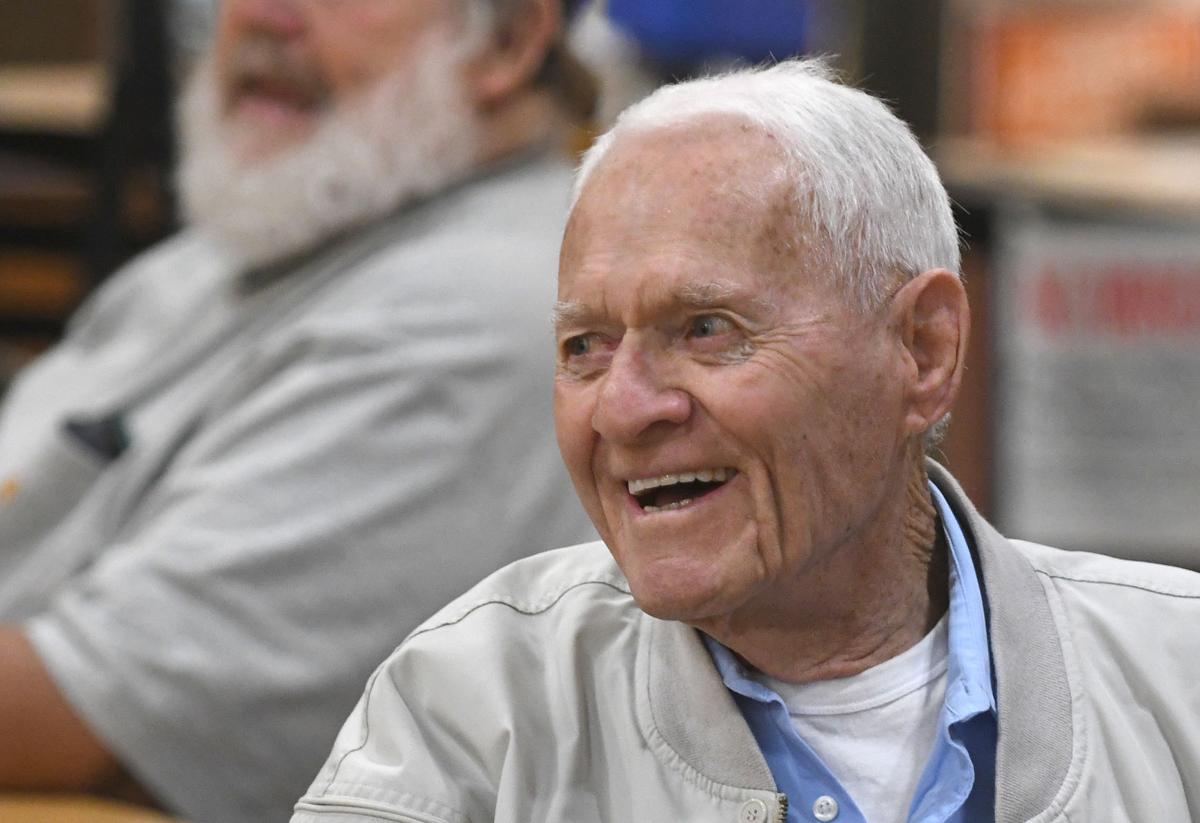 David Russell, who celebrated his 100th birthday Tuesday, survived the attack on the U.S.S. Oklahoma by scrambling by rope from the deck of the sinking battleship onto the U.S.S. Maryland on Dec. 7, 1941, at Pearl Harbor, Hawaii.

During World War II, he served on not one, but two ships that sank — the USS Oklahoma and the destroyer USS Mahan. Many of his fellow sailors and marines died.

But Russell spent Tuesday morning shaking hands and being hugged at a party celebrating his 100th birthday at American Legion Post 10 headquarters, where he and friends have breakfast nearly every day of the week.

“I don’t know, I’ve never been this old before,” the vibrant Russell said with a laugh and a smile. “I guess I made it.”

Russell is one of a dwindling number of veterans who survived the sneak attack by the Japanese Imperial Army on Pearl Harbor, Hawaii, on Dec. 7, 1941. The attack propelled the United States into World War II.

As of February, only two USS Arizona survivors are still alive, Lou Conter, 98, of Grass Valley, California, and Ken Potts, 98, of Provo, Utah.

“This is such a pleasant surprise, seeing all of these good people here,” Russell said as music of the 1940s played in the background.

Russell said he didn’t have anything big planned for the day.

“At my age, I’ll probably go home and fall asleep in my recliner,” he said.

Although he's a bit hard of hearing and uses a cane to get around, Russell looks fit as a fiddle and would still look sharp in his Navy uniform.

One of the first people to greet Russell outside the Legion Hall was his longtime friend Karen Sevolt.

“More than 40 years ago, I used to have coffee with Dave and his wife at Eve’s Buffet at Fred Meyer,” Sevolt said. “We’ve been friends ever since.”

Sevolt praised Russell for being “a really nice, generous guy. He’s a really good friend. He’s always on time. I think that’s because of his military training.”

Air Force veteran Mario Gutierrez said he and Russell have breakfast at the Legion Hall nearly every morning.

“He’s a nice guy, very smart and he gets around good for his age,” Gutierrez said. “He still drives his own car. He’s just an all-around nice guy. He never says anything bad about anybody.”

Russell grew up on a farm in Nebraska and joined the Navy in 1939 to escape the poverty of the Great Depression.

Russell has told Democrat-Herald reporters over the years that in the still of the night, he thinks about his fellow sailors who lost their lives during WWII.

Russell said that 450 of his comrades were killed on the two ships he was stationed on that sank.

He said those who perished were mostly 19 or 20 years old, with their lives ahead of them.

Russell had served aboard the USS Oklahoma, based in Hawaii, for more than a year when Pearl Harbor was attacked.

Russell and his uncle, George Russell, who was stationed at Hickam Air Base, spent Dec. 6 in downtown Honolulu.

George Russell predicted the United States was going to enter the war within a couple days.

The 21-year-old Russell was reading a book waiting to go on duty. After the Oklahoma was bombed by Japanese planes, he found himself scrambling by rope to the nearby USS Maryland, frantically trying to stay out of the raging oil- and gas-fueled fires.

There were 1,354 men on the Oklahoma and 429 died. Russell considered many of them to be friends.

On board the Maryland, Russell helped load its anti-aircraft guns.

On. Dec. 23, Russell was assigned to the destroyer USS Mahan as a gunner’s mate.

The ship saw intense battles until Dec. 7, 1944, when it was severely damaged by kamikaze planes in the Philippine Islands. On fire and exploding, the ship was sunk by a U.S. Navy destroyer.

After the war ended, Russell spent 20 more years in the Navy and traveling the world.

He retired in 1960 and then had a long career in transportation, until retiring again in 1980.

Albany’s David Russell said sometimes at night he lies awake in bed thinking about the attacks on Pearl Harbor and his service during World War II.

The last survivor: Veterans who saw the attack on Pearl Harbor are dwindling

On Dec. 7, 2008, seven red chairs lined the rain-soaked concrete in front of the Linn County Courthouse.

David Russell, 98, wonders why he is still alive, when so many of his fellow sailors aboard the USS Oklahoma died on Dec. 7, 1941, when Pearl …

Ailene Cannell Eby of Lebanon was only 2 years old, but she has vivid memories of Japanese warplanes attacking the naval military base at Pear…

Centenarian David Russell gets a hug from friend Dorothy Dingman of Albany. The two became friends while exercising by walking around the Heritage Mall.

David Russell, who celebrated his 100th birthday Tuesday, survived the attack on the U.S.S. Oklahoma by scrambling by rope from the deck of the sinking battleship onto the U.S.S. Maryland on Dec. 7, 1941, at Pearl Harbor, Hawaii.