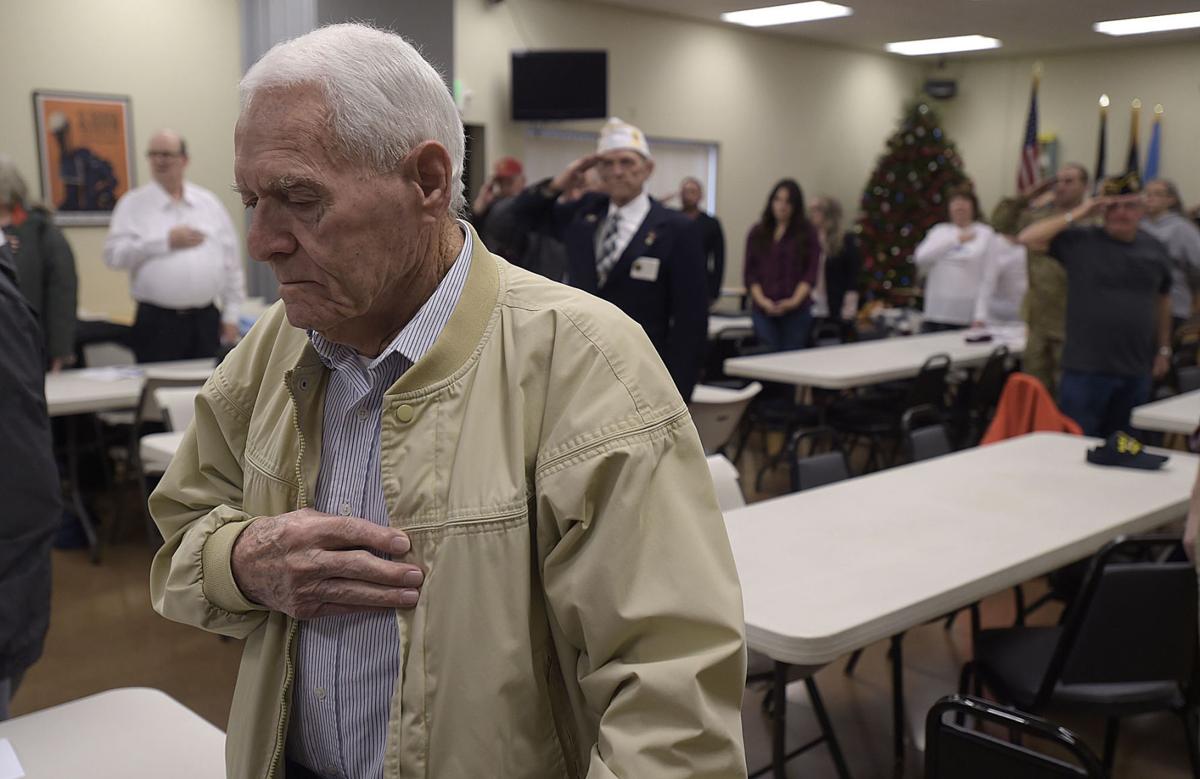 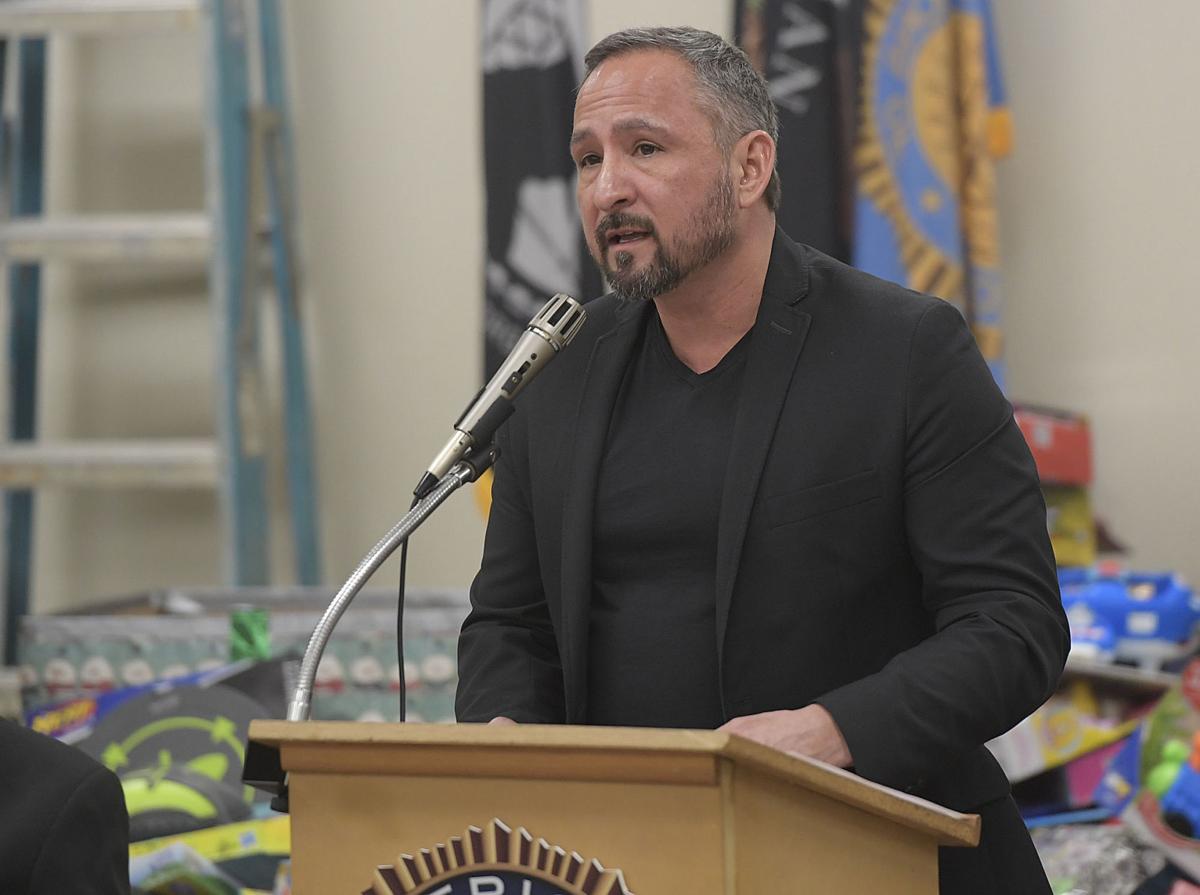 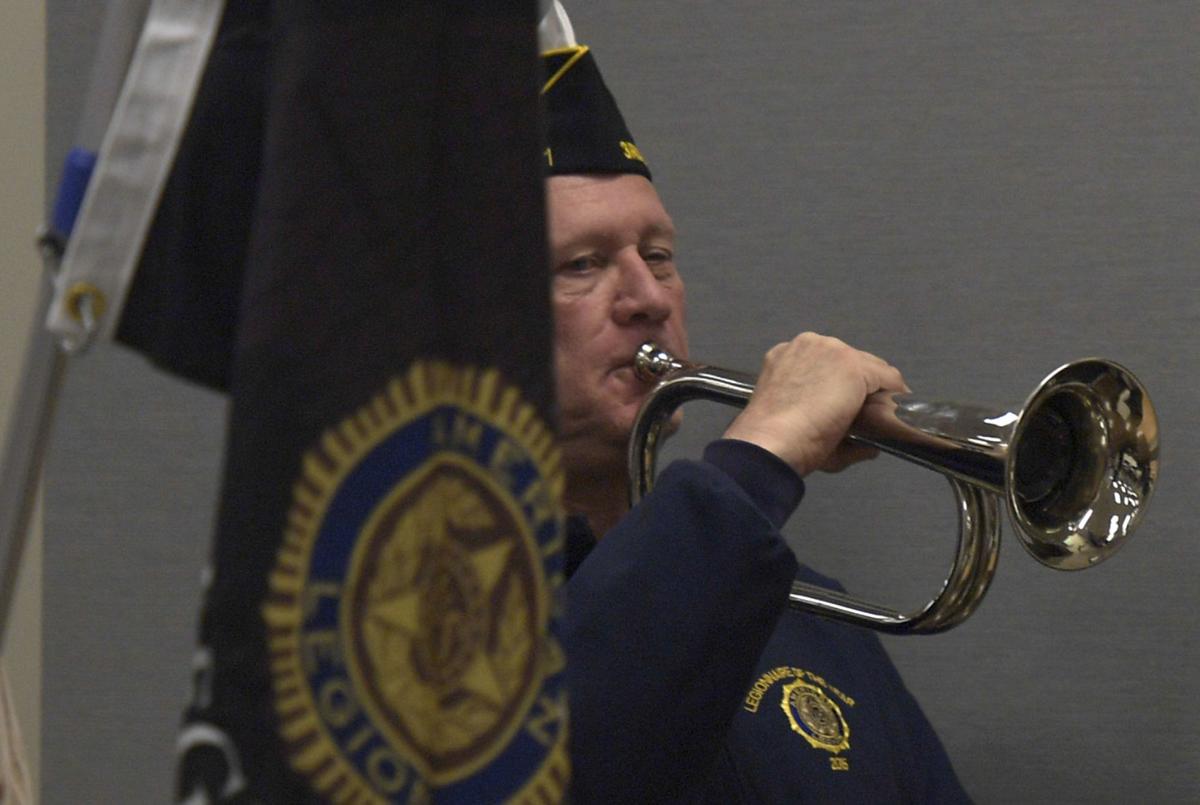 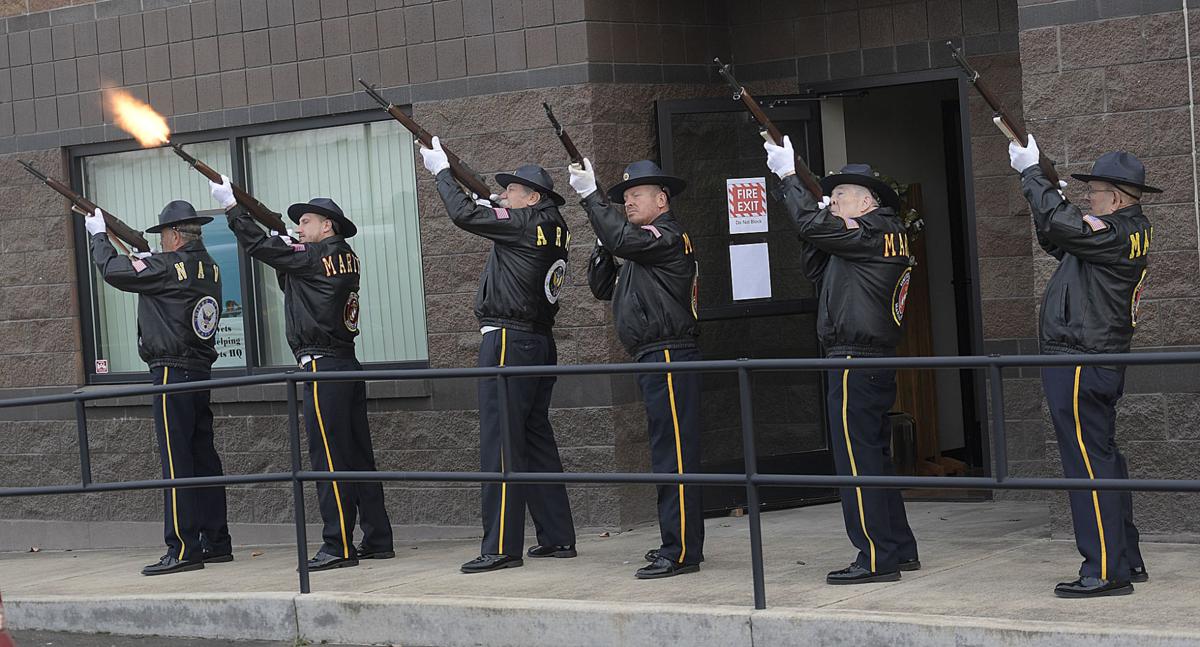 Members of the Albany Post 10 Honor Guard fire a three-volley salute during the memorial. 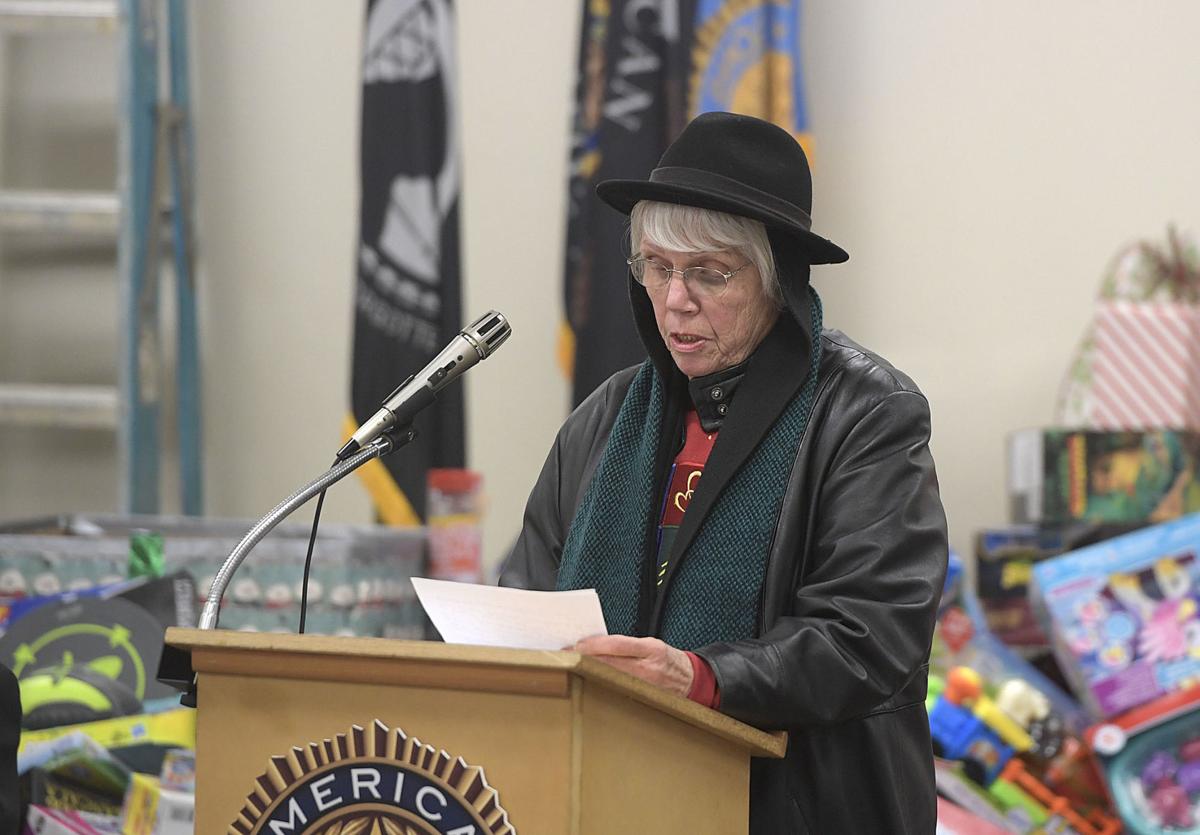 Aileen Eby of Lebanon talks about her and her mother's experience at Pearl Harbor on Dec. 7, 1941. Eby who was almost 2 went into a bomb shelter with her mother Mary Cannell during the attack. 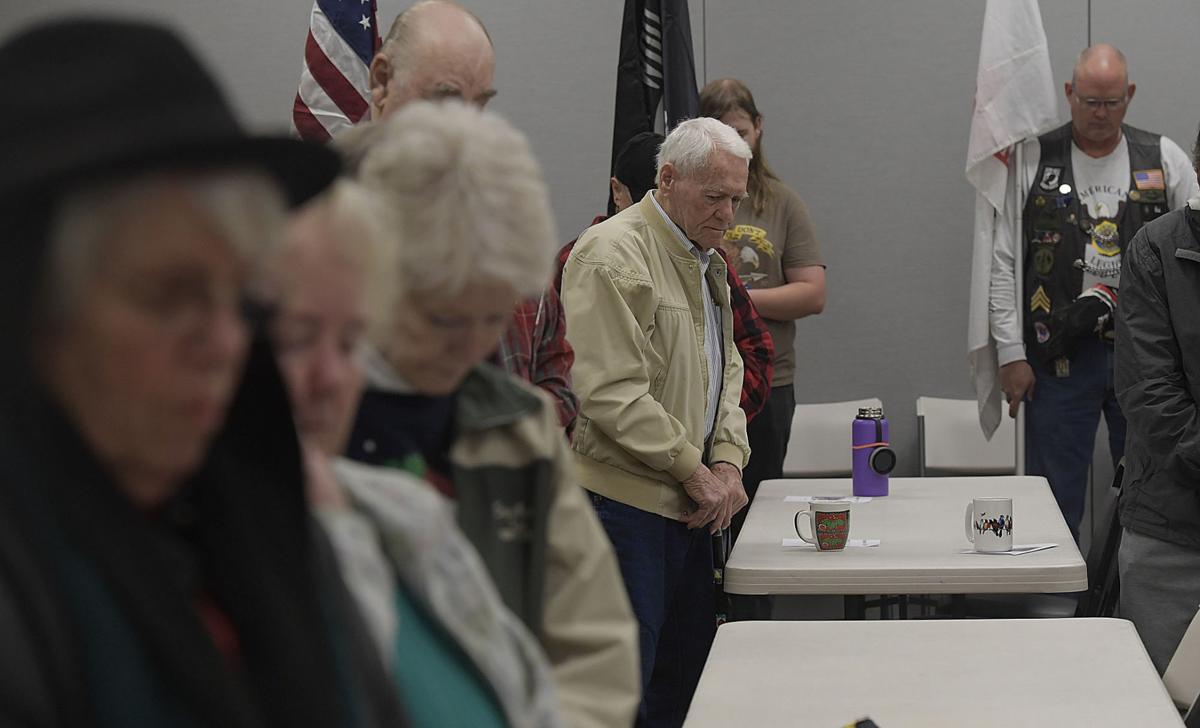 Pearl Harbor survivor Dave Russell stands in remembrance of those lost on December 7, 1941. Russell served on the USS Oklahoma, which was sunk in the attack. 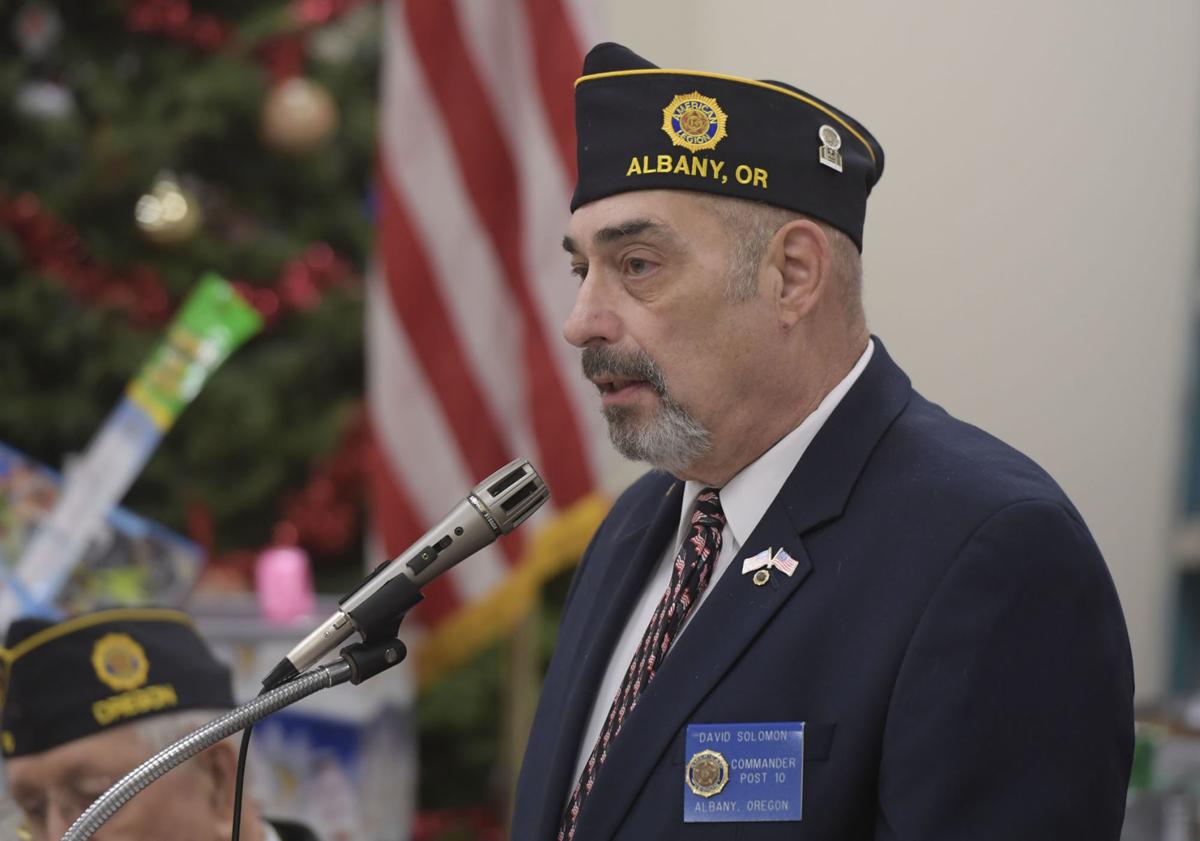 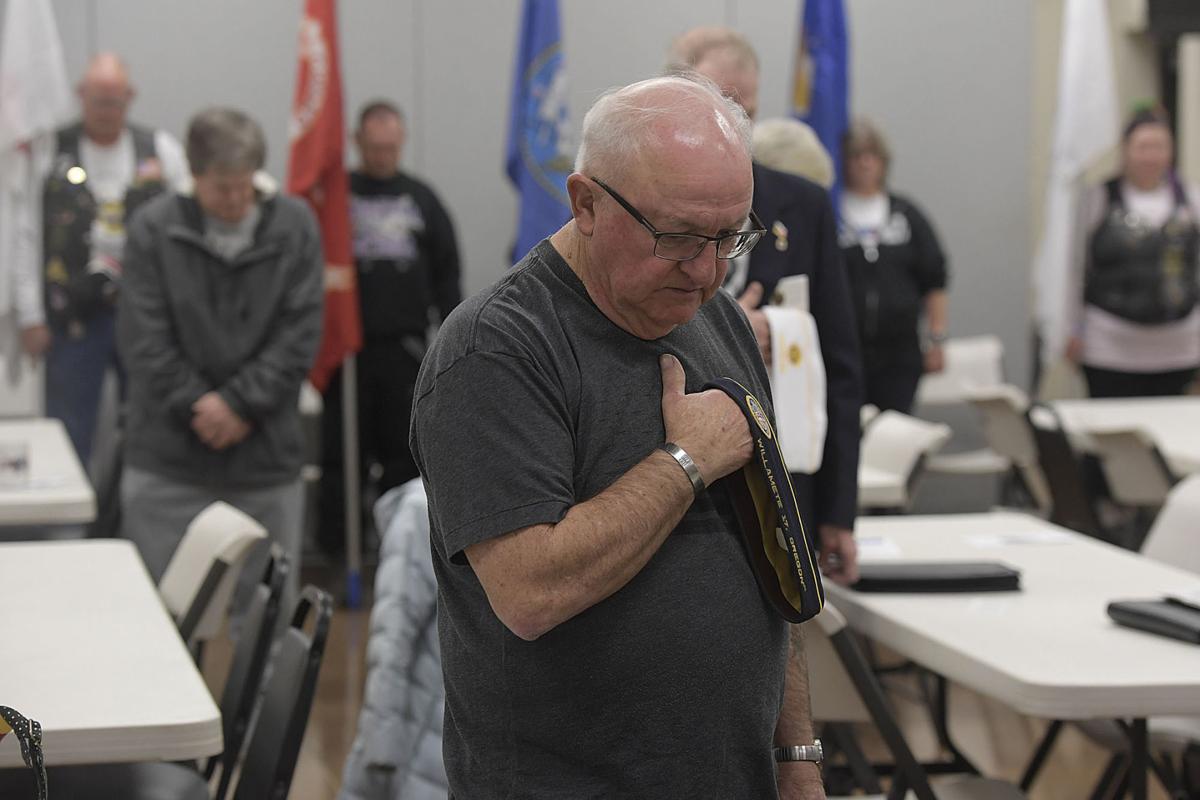 Louie White and more than 30 other attendees bow for the opening prayer during Friday morning's memorial.

David Russell, 98, wonders why he is still alive, when so many of his fellow sailors aboard the USS Oklahoma died on Dec. 7, 1941, when Pearl Harbor was attacked by aircraft from the Imperial Japanese Navy.

Several dozen people, including Russell, gathered at the American Legion Post 10 Friday to commemorate that fateful day, which galvanized the American spirit and drew the United States into World War II.

Russell was saluted by his fellow veterans and honored by all as the program began. He is the last known area survivor, although the family of Harry Scott of Sweet Home was present to honor his memory.

“I’m still here,” Russell said. “I think about all of the guys we lost on the two ships I was on and I wonder why I’m still standing.”

Post 10 Commander David Solomon said that after the surprise attack on Pearl Harbor, in which more than 2,400 people were killed, “America rose to new heights of greatness and glory.”

“We pray today for the families, husbands, wives and children of those whose loved ones did not return,” Chaplain Floyd Bacon prayed during his invocation. “Some families are still mourning. We must never forget.”

Guest speaker, retired first sergeant Bryan Burt, Army Rangers/Airborne Rangers, from Lebanon, said it "Is humbling to be here to honor those who paved the way.”

He asked for a moment of silence to honor “those who did not come home.”

Burt knows the cost of being in combat, having served in Iraq in 2004-05 and leading a unit that captured 30 of the top 100 Al Qaeda terrorists.

He also competed in the grueling Best Ranger Competition; he and his partner finished 14th out of 36 of the best teams from around the world.

Burt said there is a vast difference between common men and women who are asked by their country to be warriors and go willingly and those who stand on the sidelines and offer nothing more than criticism.

He said veterans know the true meaning between life and death, war and peace and victory and defeat.

“There is no greater love than to be willing to lay down your life for a friend,” Burt said.

Burt said that in battle “fear is my enemy,” but “grabbing hope propels me to a greater cause. We learn to dig deep, press forward and break down all barriers.”

“It shifted world powers,” Burt said. “We are called the light of the world for a reason.”

The Continental Army during the Revolutionary War was a ragtag bunch with a dream.

“At first, we didn’t look like much,” Burt said. “George Washington had never commanded an army before. We had no money, very little training. It was a bunch of farm guys who were poorly equipped. Yet, they defeated the mighty British Army.”

“Don’t ever despise small beginnings,” Burt said. “From a ragtag rabble with a cause came a light of hope.”

Burt said that not only did our military tactics change greatly, but our role in the world order changed. We created aid programs to help other countries, to educate the world’s children and to bring better health to impoverished areas.

“Greatness comes at a great cost,” Burt said. “But what you sow, you reap.”

“You who were willing to fight something bigger than yourselves, also brought distinction to yourself and your families,” Burt said.

Melody Gnagy of Lebanon told the Democrat-Herald that her father, Harry Scott, considered himself lucky to have been assigned to Pearl Harbor.

Scott was 22 when he arrived in Hawaii as a radioman on the USS Oklahoma.

He was blown onto the USS Maryland when his ship was attacked, and when the Maryland was struck, he was again blown into the water.

Scott was burned and he and another man helped each other find medical care and clothes since his had been ripped off during the explosions.

Scott went on to marry and have four children and 10 grandchildren.

“He taught all of us to respect our servicemen and women and to be grateful for the freedoms. We honor all those men and women that were at Pearl Harbor that day,” Gnagy said. “We will never forget.”

Colors were presented by the Albany Post 10 honor guard, with taps by Glen Hunter.

Eighteen ships were damaged, repaired and brought back into service.

Fifteen people won the Medal of Honor and 51 won the Navy Cross for their actions during the attack.

It is estimated there are fewer than 2,000 Pearl Harbor survivors remaining worldwide.

Members of the Albany Post 10 Honor Guard fire a three-volley salute during the memorial.

Aileen Eby of Lebanon talks about her and her mother's experience at Pearl Harbor on Dec. 7, 1941. Eby who was almost 2 went into a bomb shelter with her mother Mary Cannell during the attack.

Pearl Harbor survivor Dave Russell stands in remembrance of those lost on December 7, 1941. Russell served on the USS Oklahoma, which was sunk in the attack.

Louie White and more than 30 other attendees bow for the opening prayer during Friday morning's memorial.