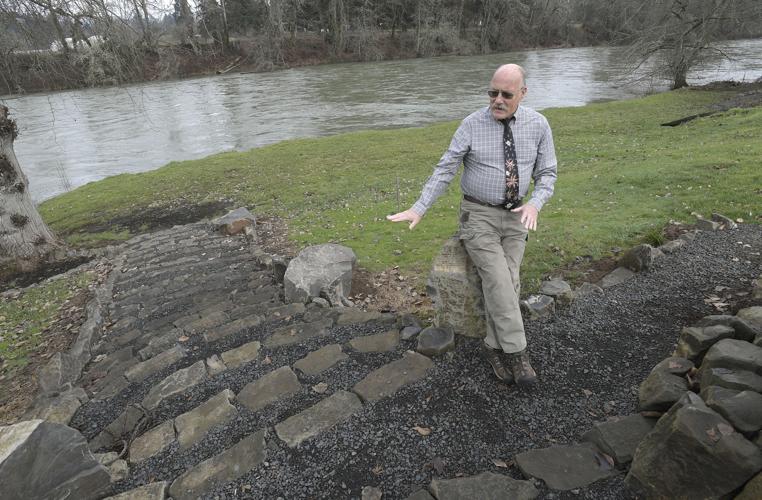 Will Tucker's retirement plans include making improvements to his home, including new steps down to an area by the South Santiam River. 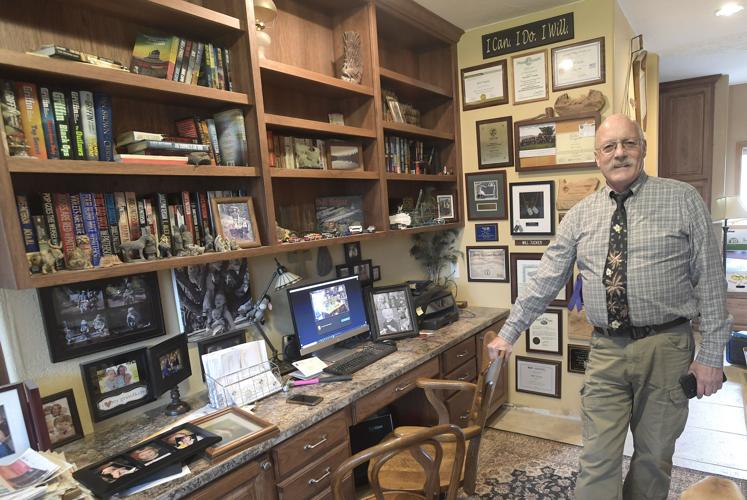 Linn County Commissioner Will Tucker has moved his office out of the Linn County Courthouse and into his Lebanon-area home. 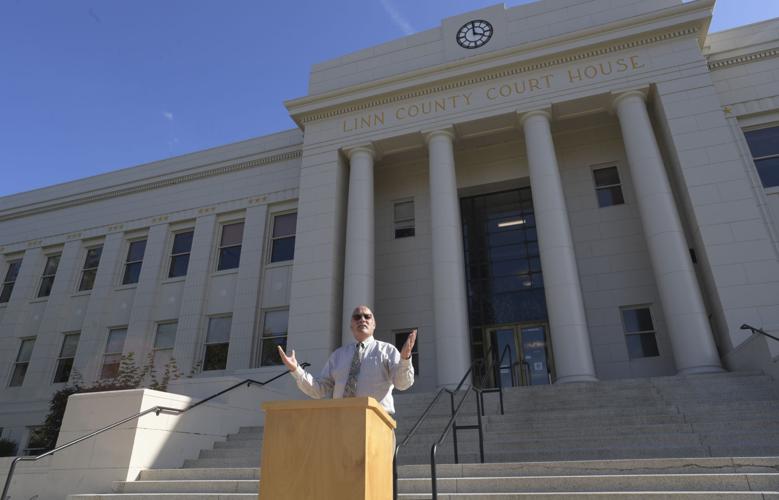 Will Tucker officially announces his retirement from the Linn County Board of Commissioners and endorses Sherrie Sprenger in this file photo from September 2019.

When Linn County Commissioner Will Tucker was 15 years old, he ran away from home and lived in San Francisco’s Haight-Ashbury district, which in 1968 was the epicenter of the hippie movement.

“I strung beads for a few weeks and girls would sell them for 50 cents,” Tucker said. “I saw the good and bad in people.”

Tucker chose to do good things in life, a decision that has guided his decision-making ever since.

Tuesday, with only 48 hours left, the clock was ticking on Tucker’s time in office. But phone calls from constituents in need — flooding, a neighbor’s garbage pile, squatters — continued rolling into his temporary office in the county courthouse in Albany.

The office he has worked out of for the last 12 years is being spruced up for incoming Commissioner Sherrie Sprenger, who will be sworn in Monday morning.

“I love Linn County and I have loved this job,” Tucker said. “I will definitely miss it, because it is really about relationships.”

Last week, fellow Commissioners Roger Nyquist and John Lindsey presented Tucker with a plaque that included Tucker’s campaign slogan, “I can, I do, I will,” and they added “He did.”

Tucker was born in Portland, but his family moved to California when he was 7 years old. He graduated from high school in 1970 and began taking classes at De Anza Community College.

In 1971 he enlisted in the Navy and spent two years aboard a P3 Orion airplane tracking Soviet submarines in the South Pacific, the Gulf of Tonkin and the Mediterranean.

“We would drop a small explosive into the water to let them know we were watching them,” Tucker said.

Tucker and his wife, Lynne, married in 1972 while he was serving in the Naval Reserve, and he was hired by Hewlett-Packard as a material handler.

“I met David Packard, and his daughter, Julie, rode the same bus I did,” Tucker said. “The Doobie Brothers bought eggs from my parents and Three Dog Night practiced near a place where I worked. It was definitely an interesting time.”

Tucker said HP was experiencing amazing growth, from making equipment for bowling alleys to music synthesizers, but it exploded when the company created an electronic slide rule.

Over the next 30 years he rose to management positions domestically and internationally and earned numerous company awards for his efforts. He worked in China, Brazil, Taiwan and Germany. He also filed several patents, including one for distributing newspapers digitally to hotels and motels.

In 1976, the Tuckers moved to Oregon after HP bought a company in McMinnville and then opened a campus in Corvallis.

“It was a dream job to come back to Oregon,” Tucker said. “We could buy property and live in the country.”

In 2001, Tucker left HP to work with a private company in Corvallis, but after the 9-11 attack, the company folded. Tucker became a realtor.

All the while, he was active in community and government activities such as serving on the county Budget Committee, Parks Board and Planning Commission. His community work ranged from CASA and CARDV to the United Way Board and nine years on the Lacomb School District Board of Education.

He ran unsuccessfully for the Oregon House of Representatives and then ran for his friend and judo instructor Cliff Wooten’s old seat on the Linn County Board of Commissioners in 2008.

His life has been a whirlwind since.

“My goal has been to find solutions and look for our commonalities rather than fight with people,” Tucker said. “To some people, collaboration and cooperation are dirty words. Not to me.”

Tucker said his political platform has been to be accessible to everyone and to make things happen.

He has learned that being accessible is possible — even though it can be taxing — but making things happen can take many years in government time.

Tucker considers opening the Linn County Fair & Expo Center as an emergency shelter for people displaced by wildfires in September his key accomplishment. More than 700 people and 1,500 animals had a place to live for a week, three meals a day, and medical and spiritual care.

“The generosity of mid-valley families and businesses and the dedication of our county staff and my fellow commissioners was absolutely amazing,” Tucker said. “It is something I will never forget.”

Linn County’s leadership in a $1 billion class action breach of contract lawsuit may have the most lasting effect, Tucker said. Nearly 40 taxing districts claimed the Oregon Department of Forestry had breached decades-long contracts to manage its state forests — which were developed primarily from lands donated by counties — for the greatest possible income to those counties.

“It was four years in the making before we got into a courtroom, and more than a year later we still haven’t received any money, but it will be worth millions and I truly hope it makes the Oregon Department of Forestry and the state look at counties in a different way,” Tucker said.

Other major projects have included:

• Clear Lake Resort: Linn County purchased the resort from the Santiam Fish & Game Association for $100,000 and has restored many of its cabins and addressed environmental issues such as moving a large diesel fuel tank away from the shoreline. It has turned into the jewel of the Linn County Parks Department. “I haven’t been successful in getting the CCC shelter renovated, and it may be too late, but I still have hope,” Tucker said.

• Excess properties: Linn County has successfully put more than 100 properties that had been foreclosed upon due to back taxes back into private ownership, which Tucker has strongly supported. “Russ Williams and Rachel Adamec have put millions of dollars in property back onto the tax rolls,” Tucker said.

• Edward C. Allworth Veterans Home: Tucker said he supported the concept from the minute he heard the Oregon Department of Veterans Affairs was going to build a second veterans home in the state. He said Linn County, Samaritan Health Services and the city of Lebanon teamed up to create a loving home for mid-valley veterans. “I have been a volunteer at the veterans home, and it is a wonderful place,” Tucker said.

• COMP-Northwest: Another cooperative effort by Linn County, Samaritan Health Services and the city of Lebanon that has become a vital organization and recently announced expansion plans. “I have been privileged to participate many times in the doctors’ bags program and to actually pass them out,” Tucker said.

• COVID-19 response: Tucker was a key figure in securing personal protective equipment for veterans home staff when four residents tested positive for COVID-19 in March, the first local cases. “It was 24-7 for several days,” Tucker said of the massive push to find enough protective gear. “But, through this, I made numerous relationships with staff from the Oregon Health Authority, and Linn County has been able to help other counties since.”

• Corps of Engineers: Tucker said he is extremely proud of the county’s relationship with the U.S. Army Corps of Engineers — especially working with Linn County Parks — culminating with a national partnership award a few years ago.

Some projects are not finished, Tucker said, such as acquiring Cascadia State Park from the state. Although Linn County is now managing the facility, Tucker said the goal is to fold the park into the county parks system.

Tucker said there have been some interesting times as a commissioner, such as doing ride-alongs with deputies or helping neighbors who were feuding (to the point of wielding guns) find peace.

“Capt. Michelle Duncan was a sergeant then, and she was with me,” Tucker said. “The participants ended up bringing us cookies.”

Tucker is not leaving public service completely. He is finishing up certification classes to manage emergency shelters for the Red Cross, and he hopes to serve on the Parks Commission.

Fellow Commissioner Roger Nyquist called Tucker a “tireless advocate for nonprofits who has a true passion for helping people with the greatest needs.”

Nyquist also praised Tucker for having a “good business instinct” for giving his undivided attention to finding PPE for staff at the veterans home during the COVID-19 outbreak and opening the emergency shelter at the fairgrounds.

“I will miss working with him,” Nyquist said.

“Will has been a great guy over the last 12 years because he really cares about what is in the best interest of Linn County residents,” Lindsey said. “We’ve seen many successes because we are pretty much on the same page. Will has a lot to be proud of.”

The family also plans to visit every state in their motor home, a goal they set two years ago when they followed the national Christmas tree from the Sweet Home Ranger District to Washington, D.C.

SWEET HOME — Like every 7-year-old boy or girl in the mid-valley, Sophia Sullens was eager to open her presents on Christmas Day, enjoy a tast…

Will Tucker's retirement plans include making improvements to his home, including new steps down to an area by the South Santiam River.

Linn County Commissioner Will Tucker has moved his office out of the Linn County Courthouse and into his Lebanon-area home.

Will Tucker officially announces his retirement from the Linn County Board of Commissioners and endorses Sherrie Sprenger in this file photo from September 2019.