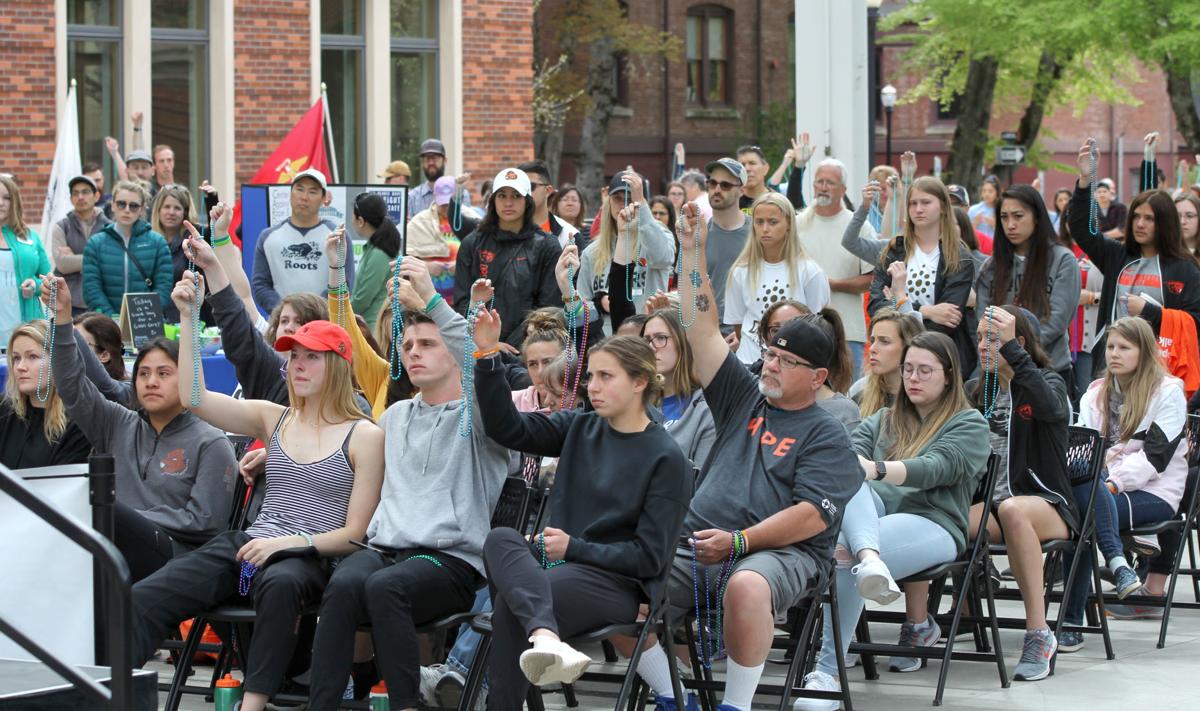 Attendees at the Out of the Darkness Campus Walk to Prevent Suicide hold up beaded necklaces showing their support for preventing suicide. 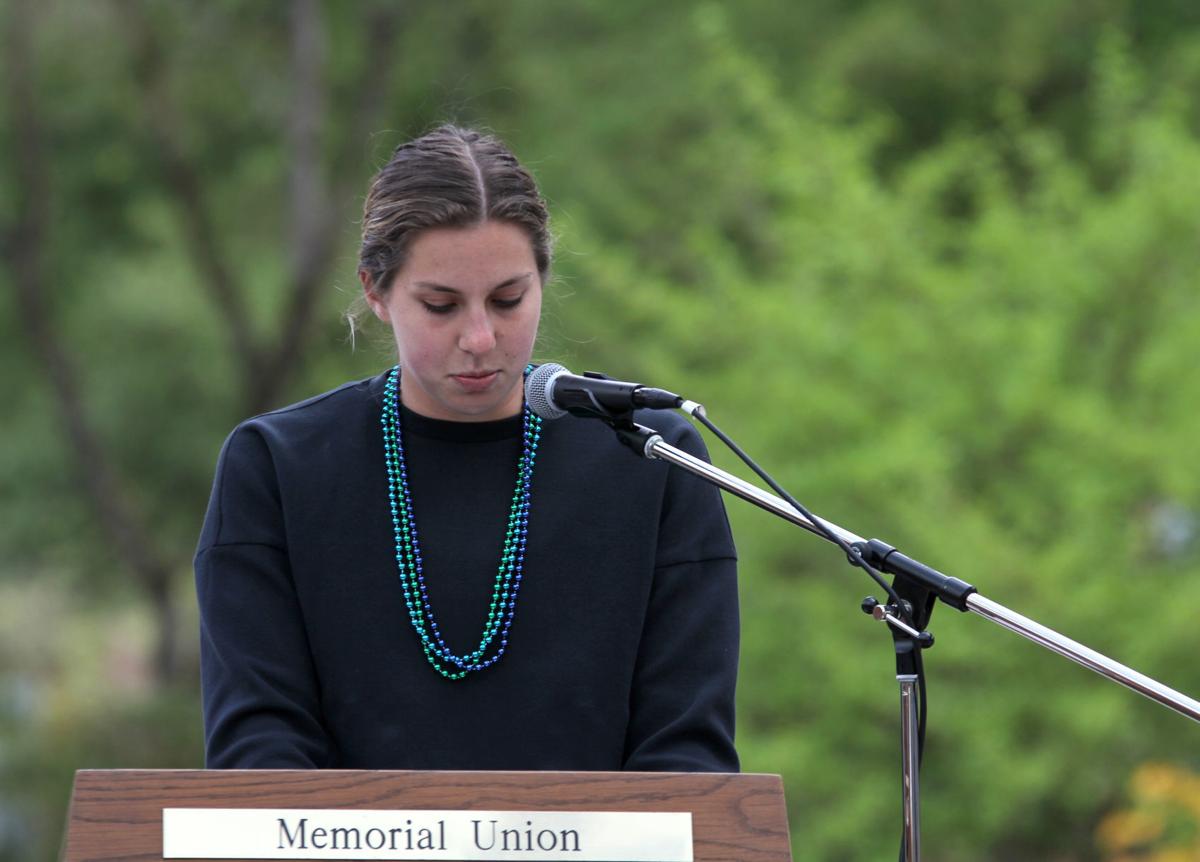 Lindsay LaMont, a member of OSU's women's soccer team, speaks Saturday at the Out of the Darkness Campus Walk to Prevent Suicide. 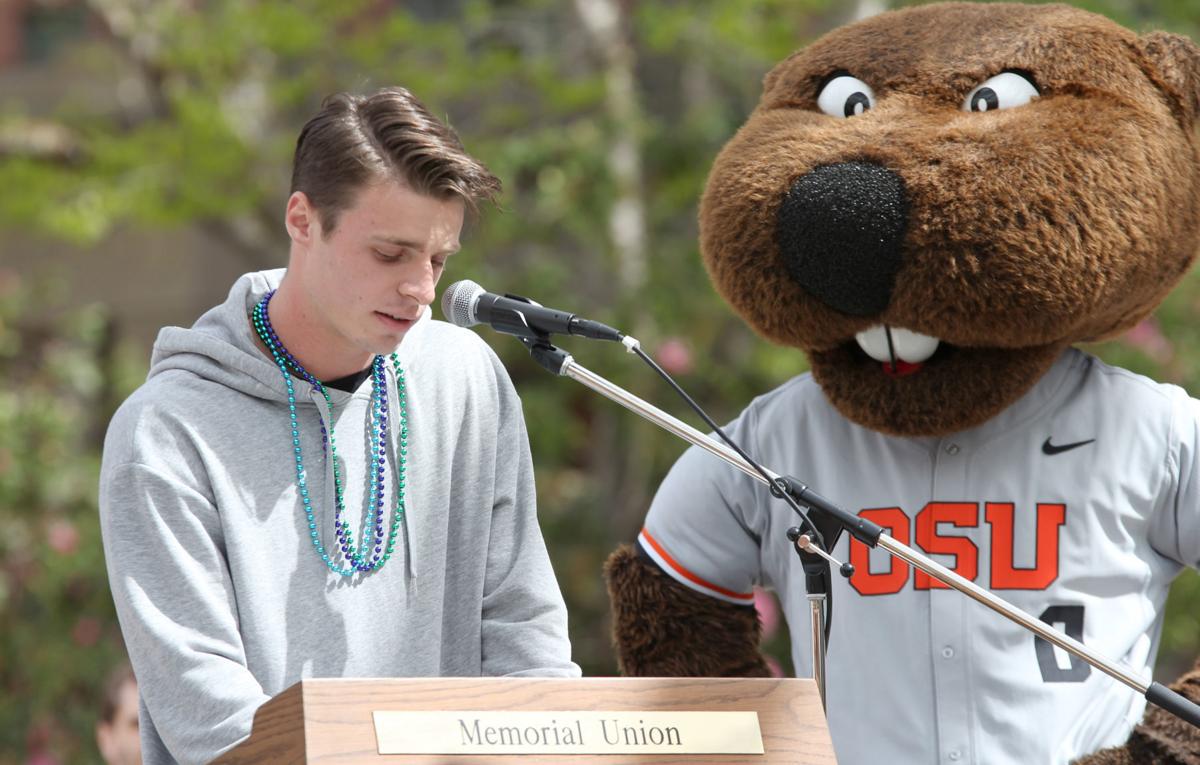 Evan Munn, a member of OSU's men's soccer team, speaks Saturday at the Out of the Darkness Campus Walk to Prevent Suicide. 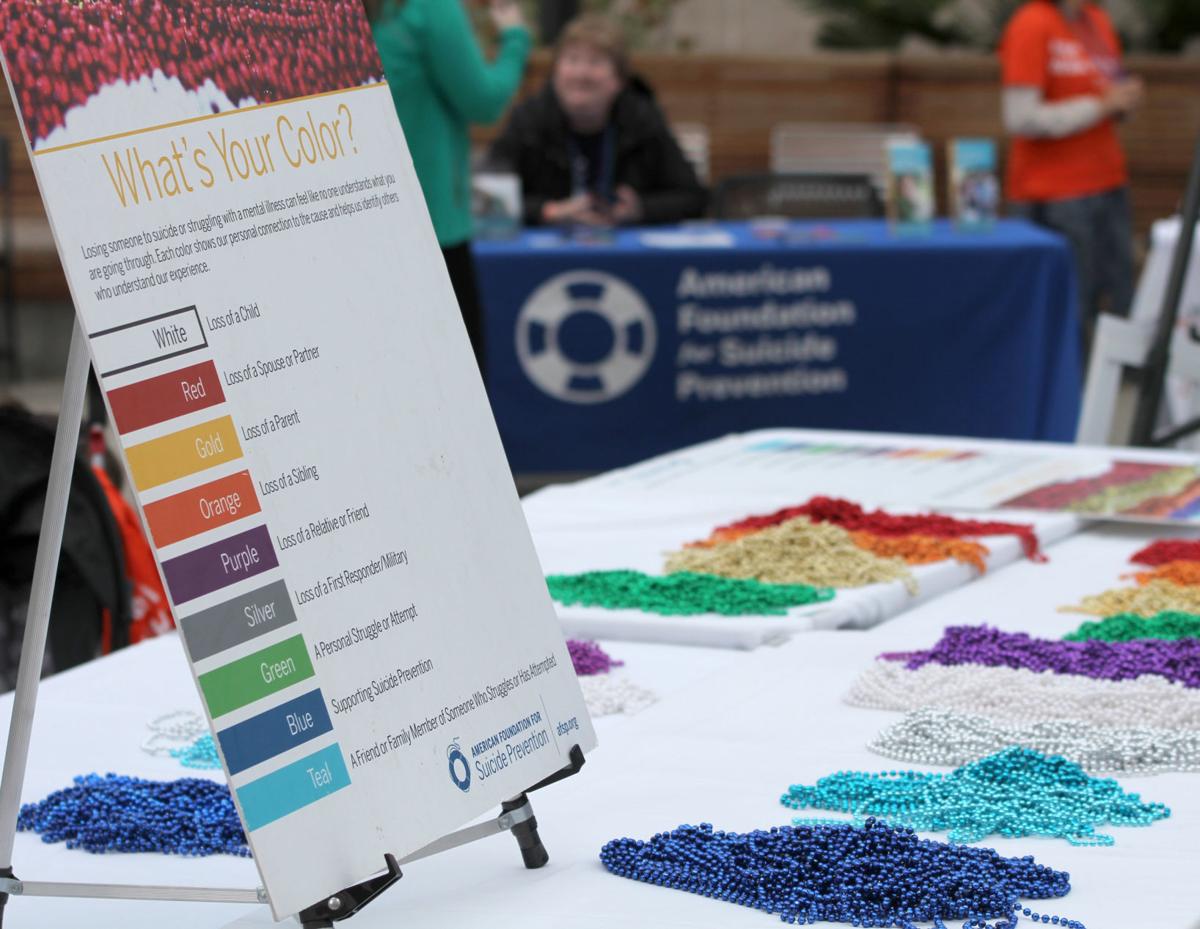 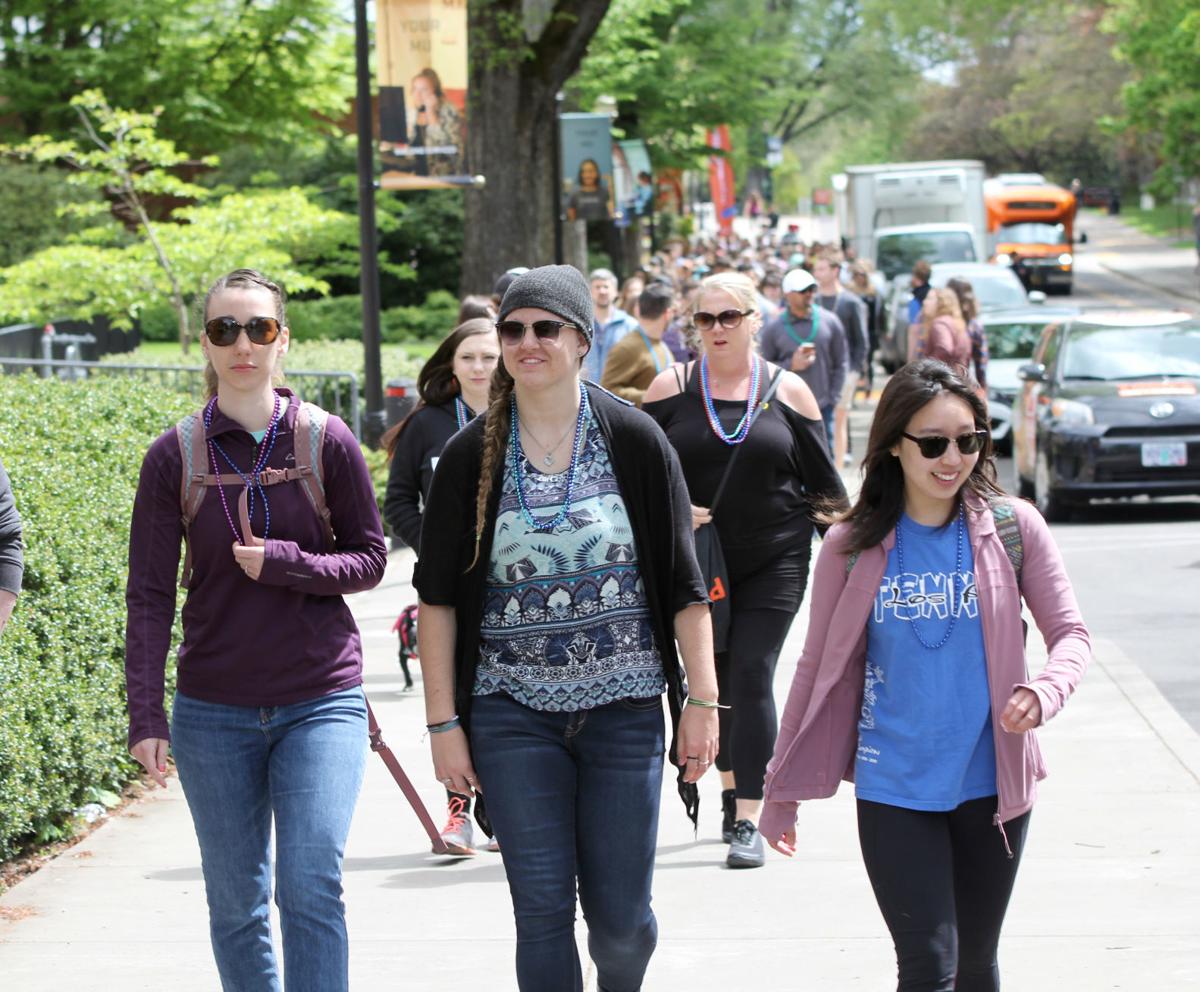 People march at the Oregon State University campus as part of Out of the Darkness Campus Walk to Prevent Suicide.

Nearly all people at the Out of the Darkness Campus Walk to Prevent Suicide Saturday at Oregon State University wore at least one necklace. Many wore many.

Tess Webster-Henry, the OSU Counseling & Psychological Services employee who coordinated the event, said there are stigmas around suicide and mental health struggles that prevent people from getting help. The event was intended to break down that stigma and give people who have lost loved ones to suicide a chance to heal, Webster-Henry said.

The event, which was affiliated with the American Foundation for Suicide Prevention, included an information fair, a march around campus and speeches by several students who had struggled with suicidal thoughts or even attempted suicide.

Among the speakers was Lindsay LaMont, a fourth-year student on OSU’s women’s soccer team. LaMont described mental health struggles following sexual abuse she experienced as a child, a sexual assault by a fellow OSU student-athlete and the death of her father.

She said as she struggled there were many times she tried to text or call friends to say she needed help, but she couldn’t do it.

“I felt like asking for help made me look weak,” she said.

LaMont said eventually she was considering self-harm and realized she needed to get help. She finally called a friend, who immediately went to her side and encouraged her to seek mental health care.

She said she got help through OSU’s counseling and psychological services program and she encouraged other people to speak out when they need help.

“Asking for help dos not make you weak. In fact, it makes you strong,” she said.

Evan Munn, on the men’s soccer team, also spoke at the event, talking about growing up in an abusive home and struggling with isolation in the wake of that trauma. At OSU, he said he found a home and teammates who supported him with his mental health struggles, he said.

“If it wasn’t for my teammates I wouldn’t be here,” he said.

He added that he and LaMont want to end the stigma that getting help is weak.

“The one thing that I’d like everyone to take away today is that it’s OK to not be OK,” he said.

Organizers said more than 300 people had registered in advance for the event  and it raised more than $10,000 for the American Foundation for Suicide Prevention, which organizes similar events nationwide. Half of those funds go toward national research on suicide prevention. The other half goes back into local suicide prevention programs.

Anthony Rimel covers weekend events, education, courts and crime and can be reached at anthony.rimel@lee.net, 541-758-9526, or via Twitter @anthonyrimel.

• Talking about wanting to die

• Looking for a way to kill oneself

• Talking about feeling hopeless or having no purpose

• Talking about feeling trapped or in unbearable pain

• Talking about being a burden to others

• Increasing the use of alcohol or drugs

• Sleeping too little or too much

The more of these signs a person shows, the greater the risk. Warning signs are associated with suicide but may not be what causes a suicide.

If someone you know exhibits warning signs of suicide:

• Do not leave the person alone

• Remove any firearms, alcohol, drugs or sharp objects that could be used in a suicide attempt

• You can text OREGON to 741741 at anytime to link up with the Crisis Text Line. A live, trained crisis counselor receives the text and responds from a secure online platform.

• Visit afsp.org for more information about preventing suicide, to donate to sucide prevention efforts or to find mental health resources.

Counseling & Psychological Services offers a wide array of services for students in crisis, including walk-in counseling from 9 a.m. to 4 p.m. Monday-Friday and an after-hours crisis line that kicks in when the office is closed. Call 541-737-2131 for more information. Additional resources can be accessed through the CAPS website at https://counseling.oregonstate.edu/mental-health-promotion/suicide-risk-reduction-program.

Student Health Services has two psychiatrists on staff available to see students with a clinician’s referral. Call 541-737-9355 for an appointment.

The Office of Student Life can help students work through a crisis and provide referrals for additional assistance. Call 541-737-9200.

A culture of caring: OSU ramps up resources for students contemplating suicide

When Holly Duvall started working for Counseling and Psychological Services at Oregon State University, she had no way of knowing how personal…

Think Too Much: Some hope, but troubling numbers, in the fight against youth suicide

The Democrat-Herald and the Gazette-Times have joined a statewide reporting effort, "Breaking the Silence," about suicide in Oregon. Over the …

Each fall in Philomath City Park, people of all ages come together to participate in Lilly's Lope for Hope. Avid runners try for their best ti…

SALEM — Oregonians die by suicide at a rate well above the national average.

Attendees at the Out of the Darkness Campus Walk to Prevent Suicide hold up beaded necklaces showing their support for preventing suicide.

Lindsay LaMont, a member of OSU's women's soccer team, speaks Saturday at the Out of the Darkness Campus Walk to Prevent Suicide.

Evan Munn, a member of OSU's men's soccer team, speaks Saturday at the Out of the Darkness Campus Walk to Prevent Suicide.

People march at the Oregon State University campus as part of Out of the Darkness Campus Walk to Prevent Suicide.