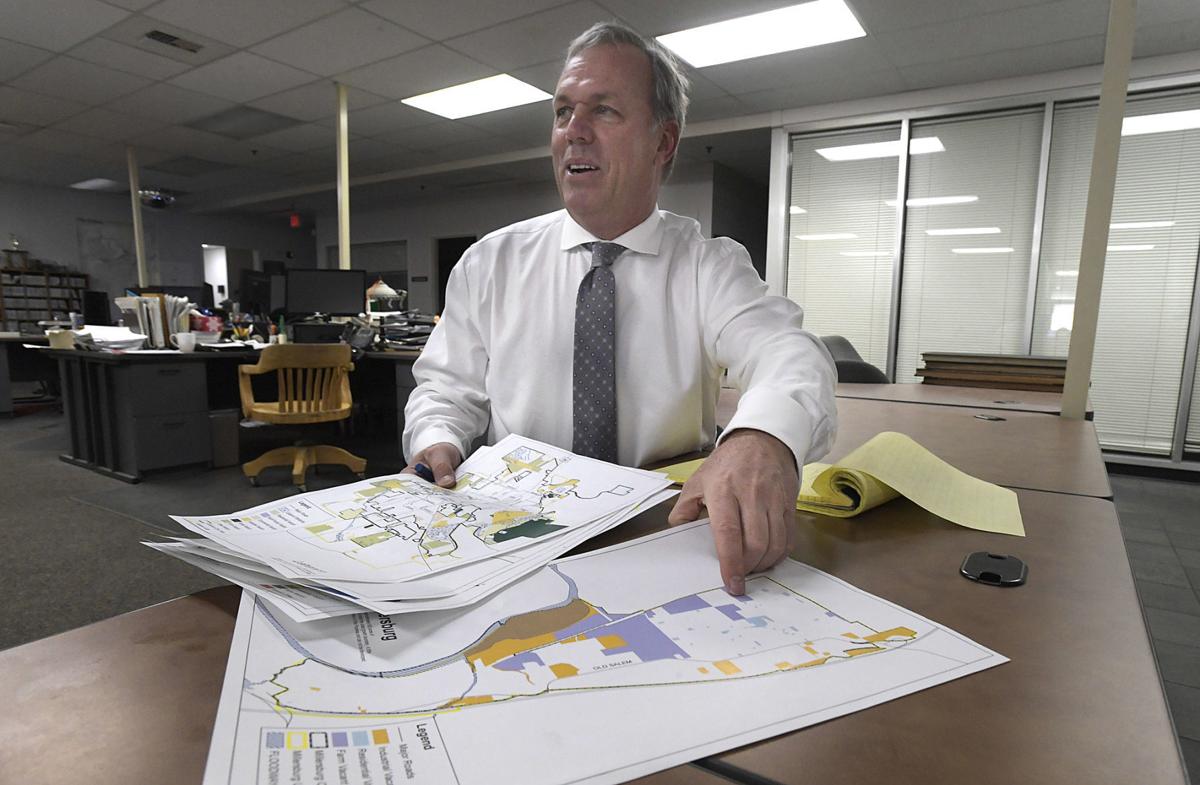 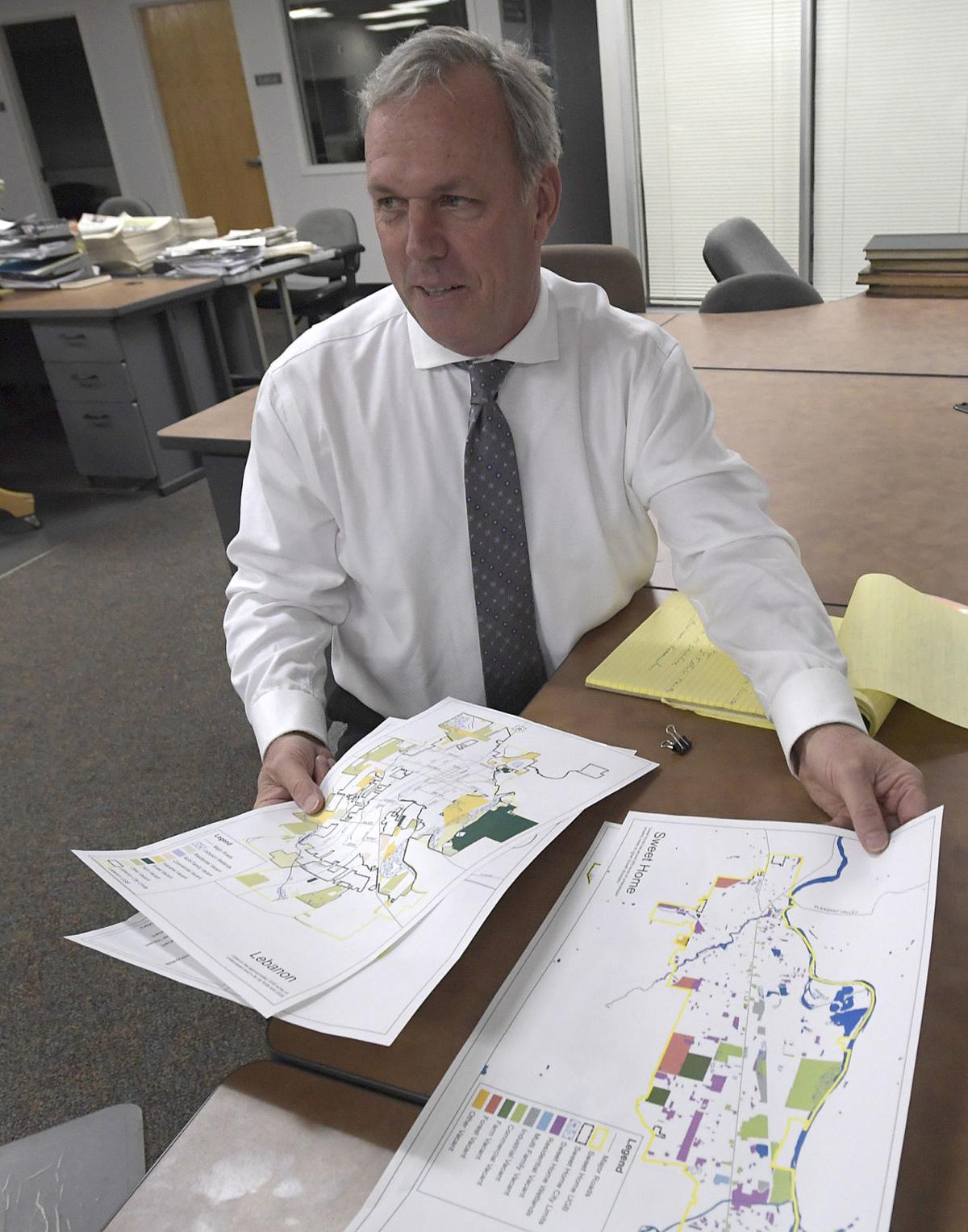 Linn County Commissioner Roger Nyquist with GIS maps of buildable lands in major area communities. Nyquist believes the state should decrease the amount of time it takes for cities to change their Urban Growth Boundaries, from the current 10 years, to one year.

If legislators are truly serious about tackling the issue of the lack of affordable housing in Oregon, they should revamp the state’s rigid land use laws, says Roger Nyquist, chairman of the Linn County Board of Commissioners.

Willamette Week recently featured a story that House Speaker Tina Kotek plans to introduce such legislation during the upcoming Legislative session. But months before her plan became public, Nyquist told mid-valley Realtors, the issue of supply and demand in Oregon has become imbalanced due to layers of complicated land use regulations.

“It looks like Speaker Kotek wants to lob a ticking time bomb into neighborhoods in most cities in the state,” Nyquist said. “The issue of affordable housing is an age-old issue of supply and demand. The infrastructure for most neighborhoods in this state is designed for single-family homes, not multi-family units.”

Nyquist said that although Kotek’s plan “might sound nice” it would ultimately, “degrade the quality of life in neighborhoods as we know it.”

Instead, Nyquist said, the state should reviews its long-standing land use laws that were intended to protect valuable farmland, which Nyquist said is a just cause. But he adds, the land use process has become so cumbersome, time-consuming and expensive, it adds extra costs to new home construction at all levels.

He said there are 17 land use goals.

“It takes 10 years for a city to change its Urban Growth Boundaries,” Nyquist said. “How can anything get done like that. The demand is today. If the city of Lebanon had not had the foresight 20 years ago to set up growth areas, we would not have the Samaritan Health Campus or the medical college in Linn County.”

Nyquist said the state needs to preserve valuable farmland, but that could be accomplished by “drawing circles around that land” similar to a system in place in British Columbia. The state must also reduce the time it takes to change a city’s Urban Growth Boundary to one year.

Nyquist said the state’s 17 land use goals were developed by the Land Use board, not the Legislature.

“Those goals are so restrictive, people living along Highway 101 can’t even use rip rap to shore up a crumbling embankment,” Nyquist said. “About 15 years ago, there were two lanes added to Interstate 5 as work was done between Albany and Salem. Instead of leaving them in place, they had to be removed.”

The editorial board of the Bulletin newspaper in Bend, concurs with Nyquist’s contentions.

A recent editorial pointed out that although the city of Bend is considering changing its zoning rules to allow duplexes and triplexes in single-family neighborhoods that should be a local issues, not a statewide mandate.

The editorial also notes, “As for the Legislature, if its members are as concerned about Oregon’s housing problems as Kotek is, there’s an easy solution at hand. Give cities more freedom to expand their urban growth boundaries quickly. That would serve to lower housing costs and up housing supplies far more equitably than a state-imposed zoning change could ever do.”

Kotek’s plan would affect cities with populations of 10,000 or more, which would encompass more than half of the state’s population.

“The state’s housing crisis requires a combination of bolder strategies,” the Portland Democrat said in a prepared statement. “Oregon needs to build more units, and we must do so in a way that increases housing opportunity for more people. Allowing more diverse housing types in single-family neighborhoods will increase housing choice and affordability, and that’s a fight I am willing to take on.”

Public members in attendance got into a shouting match with school officials.

Albany man suspected of assault and strangulation, victim is dead

So far, he's not charged with murder. He claims he found her on the bathroom floor at Fort Hoskins Park in Philomath.

A property in North Corvallis will be the site of a new jail and other justice-related facilities, Benton County leaders decided Friday, Jan. 21.

A note from the superintendent requests the maskless to refrain from engaging in mask-shaming.

Albany nurse fined for practicing without a license

An Albany man who once was a registered nurse practiced nursing without a license in 2020 and 2021 and because of that, was denied when he tri…

A Sweet Home teenager was killed in a car crash on Highway 20 just east of Foster on Wednesday, Jan. 19, according to a news release from Oreg…

The boyfriend of slain cross-country traveler Gabby Petito admitted killing her in a notebook discovered near his body in a Florida swamp, the FBI said.

Linn County District Attorney Doug Marteeny has filed a lawsuit against Gov. Kate Brown challenging her use of clemency orders to grant nearly…

Russia says US failing on Ukraine but more talks possible

Nestle to pay cocoa growers to keep kids in school

Nestle to pay cocoa growers to keep kids in school

Linn County Commissioner Roger Nyquist with GIS maps of buildable lands in major area communities. Nyquist believes the state should decrease the amount of time it takes for cities to change their Urban Growth Boundaries, from the current 10 years, to one year.