WASHINGTON (AP) — Donald Trump’s extraordinary effort to overturn his 2020 election defeat brought the Justice Department to the brink of chaos, and prompted top officials there and at the White House to threaten to resign, a Senate Judiciary Committee report found.

The report released Thursday offers new insight into how the Republican incumbent tried to undo the vote and exert his will on the department, asking leaders to declare the election "corrupt" and disparaging its top official for not doing anything to overturn the results. Trump's actions led to a near-revolt at department headquarters that receded only after senior officials warned of a mass resignation, with one White House lawyer describing the efforts to undo the election as a "murder-suicide pact."

"In attempting to enlist DOJ for personal, political purposes in an effort to maintain his hold on the White House, Trump grossly abused the power of the presidency" and arguably violated a federal law that prevents anyone from commanding that federal employees engage in political activity, the report says.

While the broad outlines of what took place after the Nov. 3 election have long been known, the Senate investigation based on a review of documents and interviews with former officials lays bare the extent of Trump's all-out campaign to remain in the White House. It shows how Trump benefited from the support of a little-known Justice Department lawyer who championed the then-president's efforts to challenge the vote but how, in the end, other senior officials stood together to face down Trump. The outcome suggests how reliant the fragile U.S. election system is on the integrity of government officials.

Trump's effort, now the subject of a Justice Department inspector general investigation, did not succeed and Biden took office on Jan. 20. Even so, the false claims over the election have fractured the nation, with millions of Americans wrongly believing the contest was stolen.

Rage about the election compelled a mass of Trump supporters to violently storm the Capitol on Jan. 6 in an effort to disrupt the congressional certification of Biden's victory. The rioters beat and bloodied an overwhelmed police force, sent lawmakers running for their lives and caused $1 million in damage. More than 630 people have been charged criminally in the riot, the largest prosecution in Justice Department history.

Republicans, who have mostly stayed loyal to Trump since the insurrection, issued their own report that downplays the concerns raised by Democrats and paints Trump as a hero who ignored the suggestions from the lawyer, Jeffrey Clark, and who refused to fire top Justice Department officials. Their rebuttal makes the astonishing claim that Trump was concerned about the election system writ large and not about himself, even though he was publicly fighting to stay in office and pressured Vice President Mike Pence to help him.

The Democrats' report chronicles Trump's relentless prodding of the Justice Department during a turbulent stretch in late December and early January to investigate suspected voter fraud and to support his efforts to undo the results. Trump had laid the groundwork for that effort even before the election when he attacked the vote-by-mail process.

But he escalated it significantly after Election Day and particularly after the December resignation of Attorney General William Barr, who weeks before he left the Justice Department told The Associated Press that the department had not found fraud that could affect the outcome of the election.

In one White House meeting recounted for Senate investigators, Jeffrey Rosen, who served as Barr's deputy and briefly led the department after Barr left, described how Trump, in an effort to initiate a department inquiry, showed videos of "somebody delivering a suitcase of ballots."

Rosen said he recalled saying to Trump, "I really want to suggest to you, sir, respectfully, that it would be a better thing for everyone to use this last month to focus on some of the things that had been accomplished in the last four years, a — tax reform and the vaccine, Operation Warp Speed, and not go into this 'the election was corrupt.'"

The pressure campaign by Trump and his allies included a draft brief the White House wanted the Justice Department to file with the Supreme Court to overturn the election results. The department refused to file the document, which the Senate report describes as raising a "litany of false and debunked claims."

The conflict culminated in a contentious, hourslong meeting at the White House on Jan. 3 in which Trump openly considered replacing Rosen as acting attorney general with Clark, an assistant attorney general. The Democrats' report says Trump told Rosen: "One thing we know is you, Rosen, aren't going to do anything to overturn the election."

Clark had positioned himself as more sympathetic to pursuing Trump's fraud claims even though the results were certified by states and Republican election officials. Courts rejected dozens of legal challenges to the election and Barr, Trump's own attorney general, had said Biden won fairly.

Clark declined to be interviewed voluntarily by the committee.

But several officials in the Jan. 3 meeting told Trump they would resign if he put Clark in charge at the Justice Department. According to witnesses interviewed by the Senate committee's majority staff, White House counsel Pat Cipollone referred to a draft letter from Clark pushing Georgia officials to convene a special legislative session on the election results as a "murder-suicide pact." Cipollone threatened to quit.

Richard Donoghue, who was Rosen's deputy at the time, replied there was "no chance" he would sign that letter or "anything remotely like that." Donoghue told the committee that he told Trump that all of the assistant attorneys general, and perhaps U.S. attorneys and other senior department officials, would resign en masse if the president were to replace Rosen with Clark.

Georgia emerged as a particular area of focus for Trump, who sought the removal of the top prosecutor in Atlanta, BJay Pak, claiming that he was a "never Trumper," according to the report. Pak had originally planned to stay on in the position until Inauguration Day, Jan. 20, but resigned weeks earlier than that because of the pressure from Trump.

Besides Clark, Trump found another ally in Rep. Scott Perry, R-Pa., who has disputed the validity of Biden's victory in Pennsylvania and called Donoghue on Dec. 27 to say the department wasn't doing its job with respect to the elections. Perry encouraged Donoghue to call on Clark to help because he's "the kind of guy who could really get in there and do something about this," according to the report.

Trump tweets from the White House

Many Americans believe in a ‘deep state’

Supreme Court turns to the right

President’s lawyer versus the people’s lawyer

Drilling in the Arctic

Nepotism in the White House

Clearing protesters for a photo op

Fighting with China over trade

Insulting friends, cozying up to enemies

Fauci fires back at Cruz over COVID claims about Chinese lab

WASHINGTON (AP) — Dr. Anthony Fauci, the government’s top infectious diseases expert, blasted Sen. Ted Cruz for suggesting that Fauci be investigated for statements he made about COVID-19 and said the criticism by the Texas Republican was an attack on science.

HARRISBURG, Pa. (AP) — Dr. Mehmet Oz, the celebrity heart surgeon best known as the host of TV’s "Dr. Oz Show" after rocketing to fame on Oprah Winfrey's show, announced Tuesday that he is running for Pennsylvania’s open U.S. Senate seat as a Republican.

In her statement blasting Boebert on Monday, Omar said Boebert had "a clear pattern for Islamophobic hate speech."

RALEIGH, N.C. (AP) — North Carolina state Sen. Ben Clark announced Monday his run for U.S. House in the state's 4th Congressional District. He is looking to secure the Democratic nomination in a GOP-leaning district outside Raleigh that is expected to be one of the most competitive races in the state.

Donald Trump tested positive for COVID-19 three days before his first presidential debate in September 2020 with Joe Biden, according to a new book by Trump's former chief of staff.

WASHINGTON (AP) — U.S. home prices rose briskly in September, another sign that the housing market is booming in the aftermath of last year's coronavirus recession.

NEW YORK (AP) — As Donald Trump's lawyers try to block the White House from releasing records to the congressional committee investigating the Jan. 6 Capitol insurrection, the former president faces a flurry of other investigations that could come to a head in the coming weeks and the new year.

JEFFERSON CITY, Mo. (AP) — A federal judge on Monday blocked President Joe Biden’s administration from enforcing a coronavirus vaccine mandate on thousands of health care workers in 10 states that had brought the first legal challenge against the requirement.

US moving to toughen testing requirement for travelers

The Biden administration is moving to toughen testing requirements for international travelers to the U.S., including both vaccinated and unvaccinated people, amid the spread of the new omicron variant of the coronavirus.

WASHINGTON (AP) — A panel of judges on Tuesday questioned whether they had the authority to grant former President Donald Trump's demands and stop the White House from allowing the release of documents related to the Jan. 6 insurrection led by Trump's supporters. 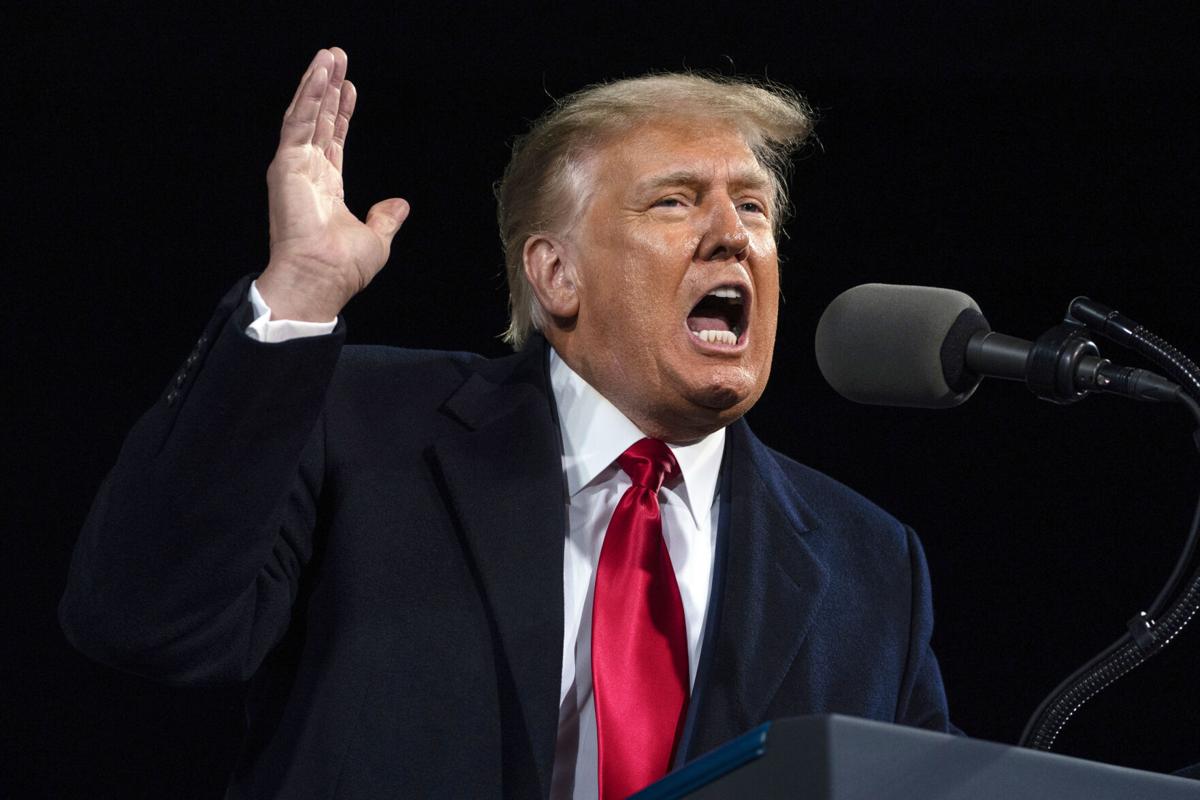 A report by the Senate Judiciary Committee's Democratic majority details  former President Donald Trump's extraordinary effort to overturn the 2020 presidential election that he lost. His pursuit of fraud claims brought the Justice Department to the brink of chaos and prompted top officials there and at the White House to threaten to resign. 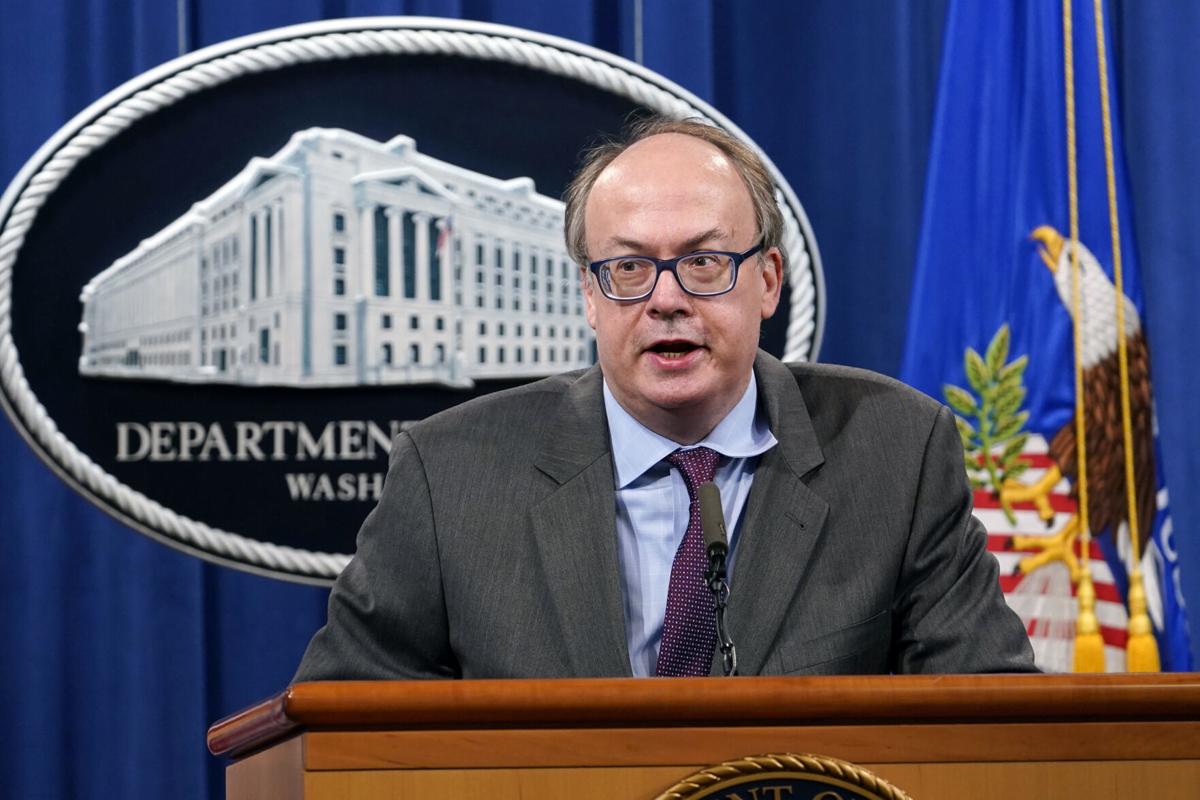 In this Sept. 14, 2020, file photo, Jeffrey Clark, Assistant Attorney General for the Environment and Natural Resources Division, speaks during a news conference at the Justice Department in Washington. 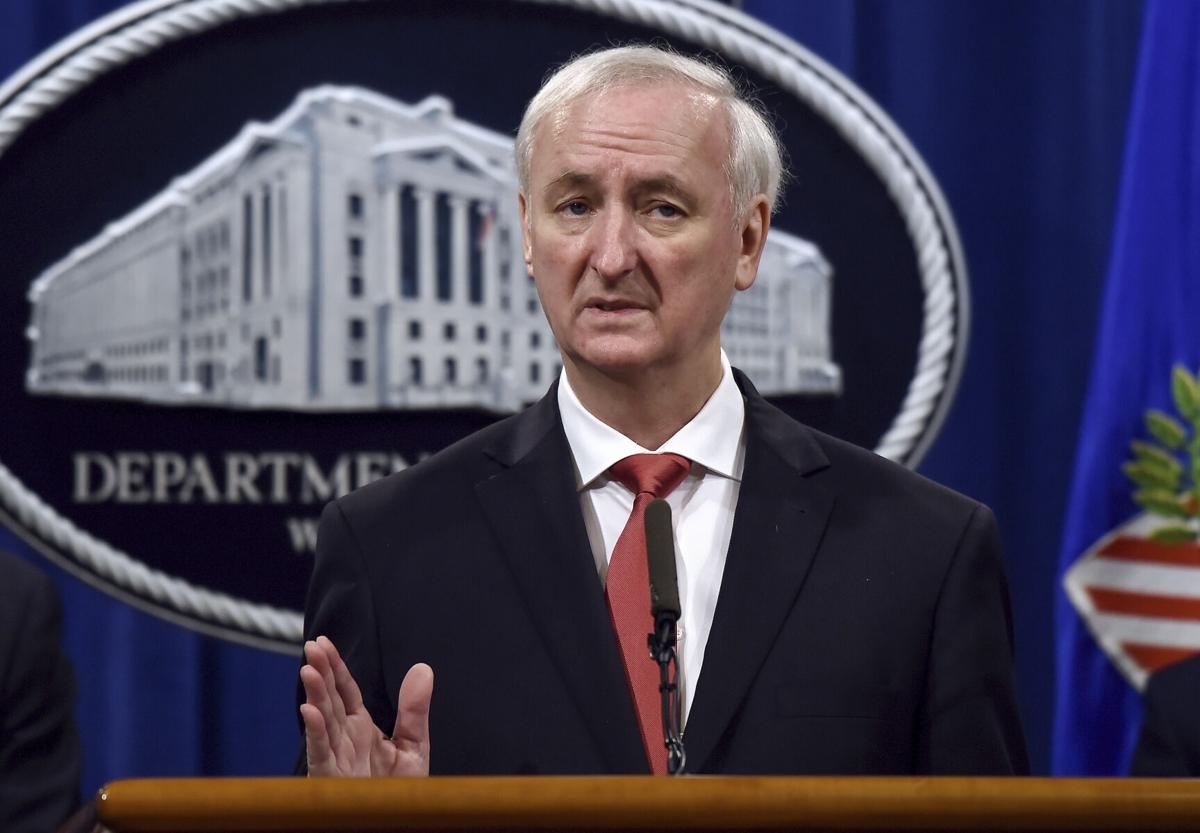 In this Sept. 22, 2020 file photo, Deputy Attorney General Jeffrey Rosen speaks during a news conference at the Department of Justice in Washington. 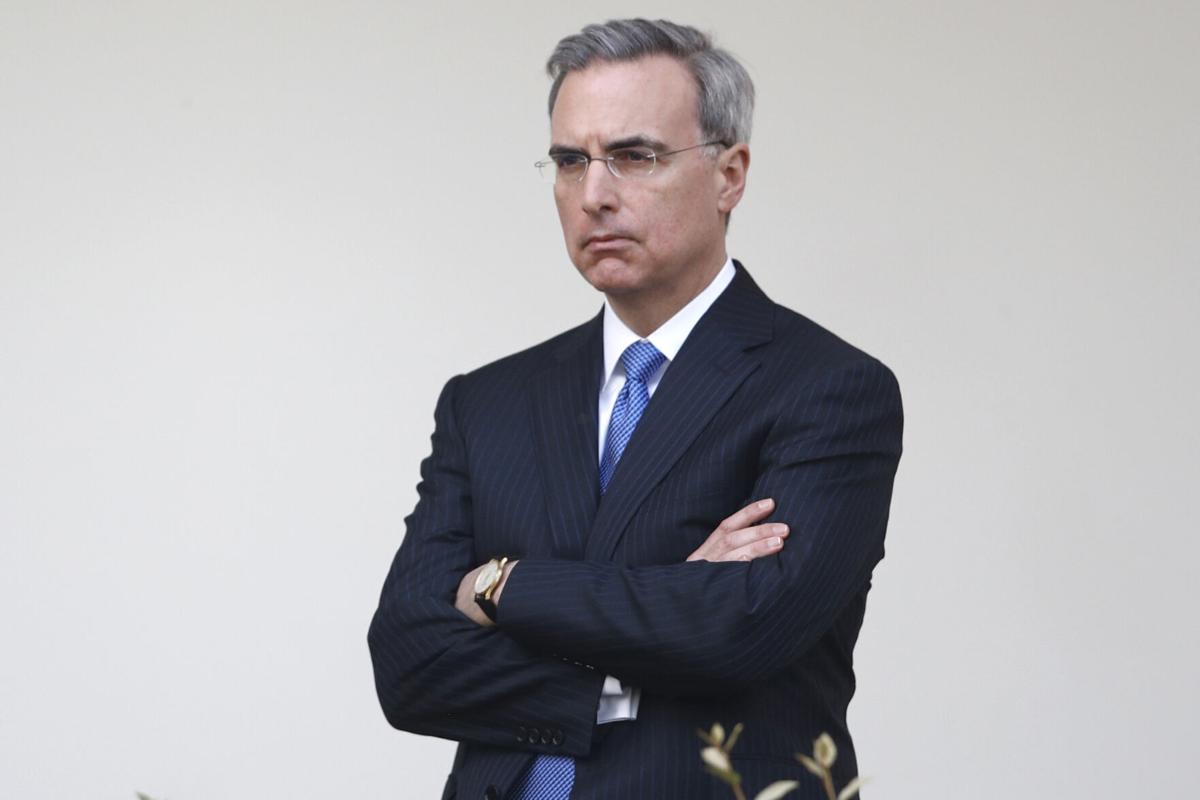 In this March 29, 2020, file photo, White House counsel Pat Cipollone listens as President Donald Trump speaks during a coronavirus task force briefing in the Rose Garden of the White House in Washington.