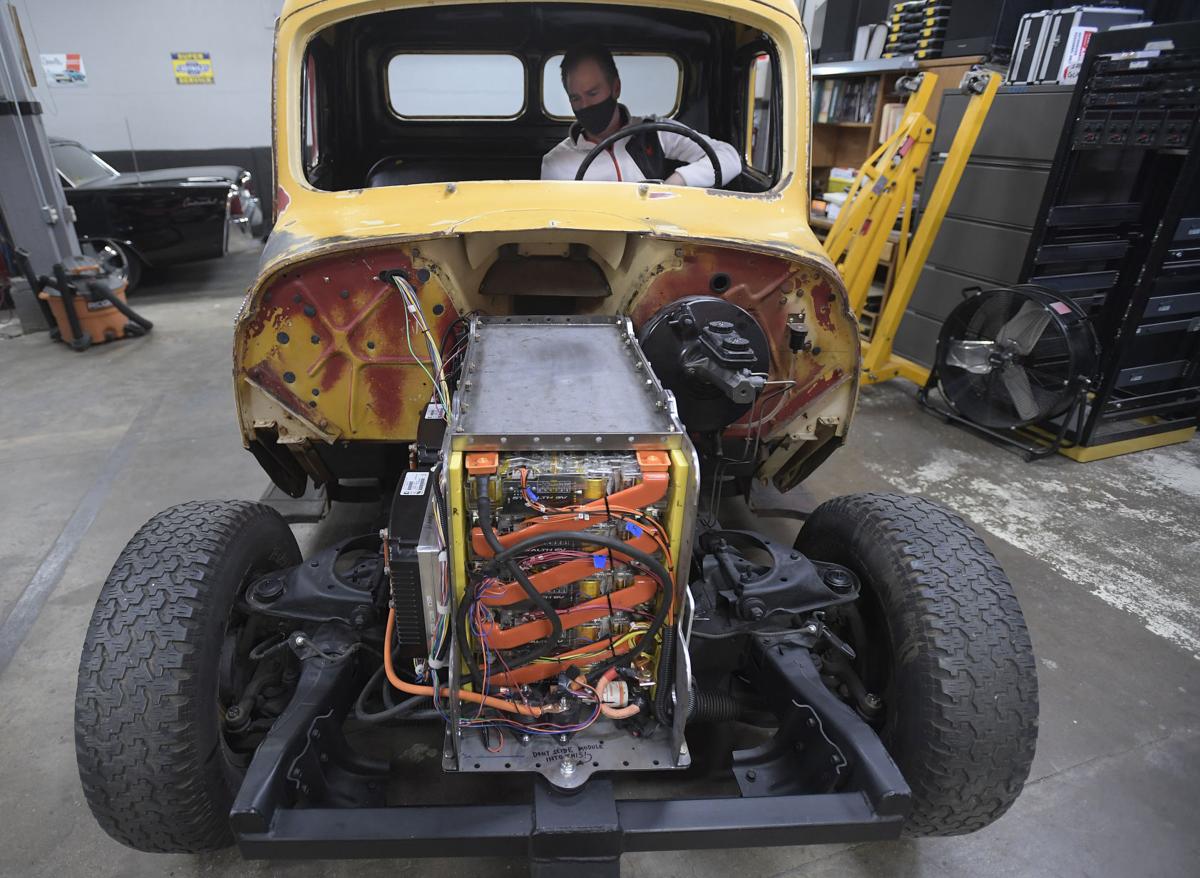 One of Shift Electric Vehicles' current projects, a 1951 International pickup owned by a local family. 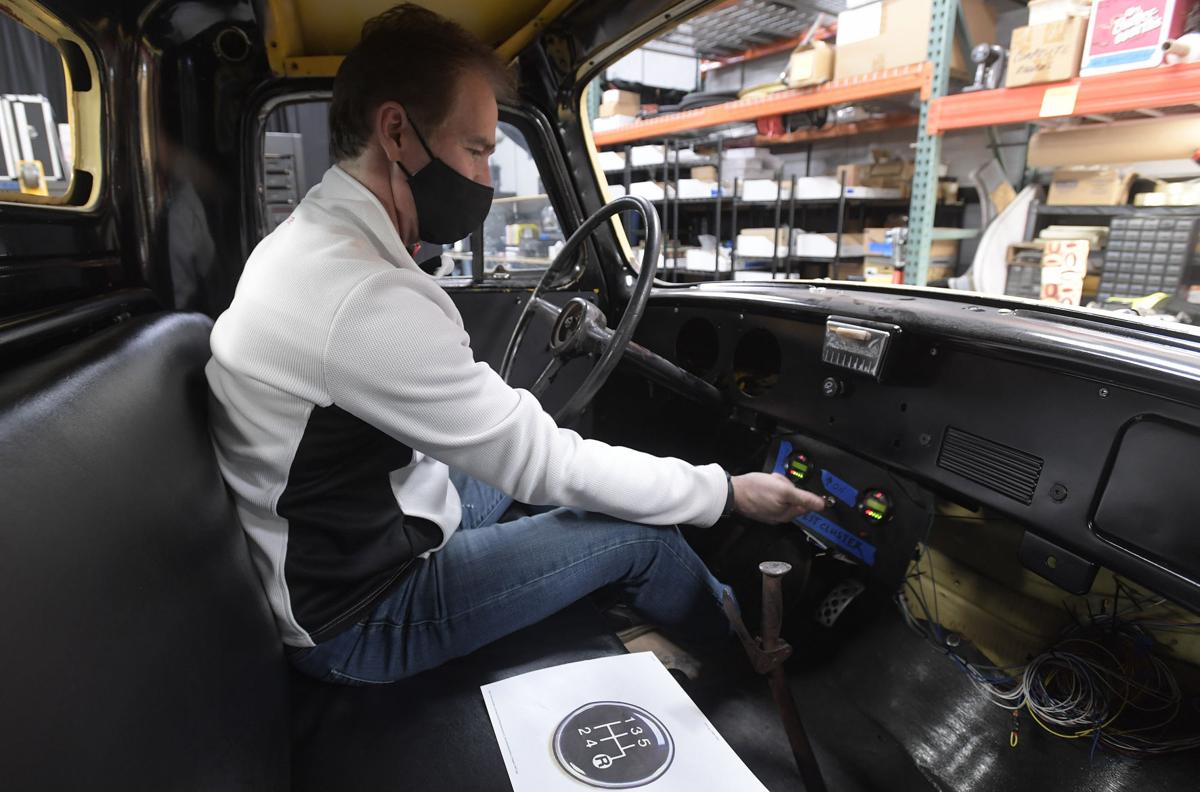 Kirk Swaney, owner of Shift Electric Vehicles, starts up a 1951 International pickup his company in downtown Albany is converting to electric power. When finished, the pickup will have Tesla batteries under its hood and in the pickup bed. 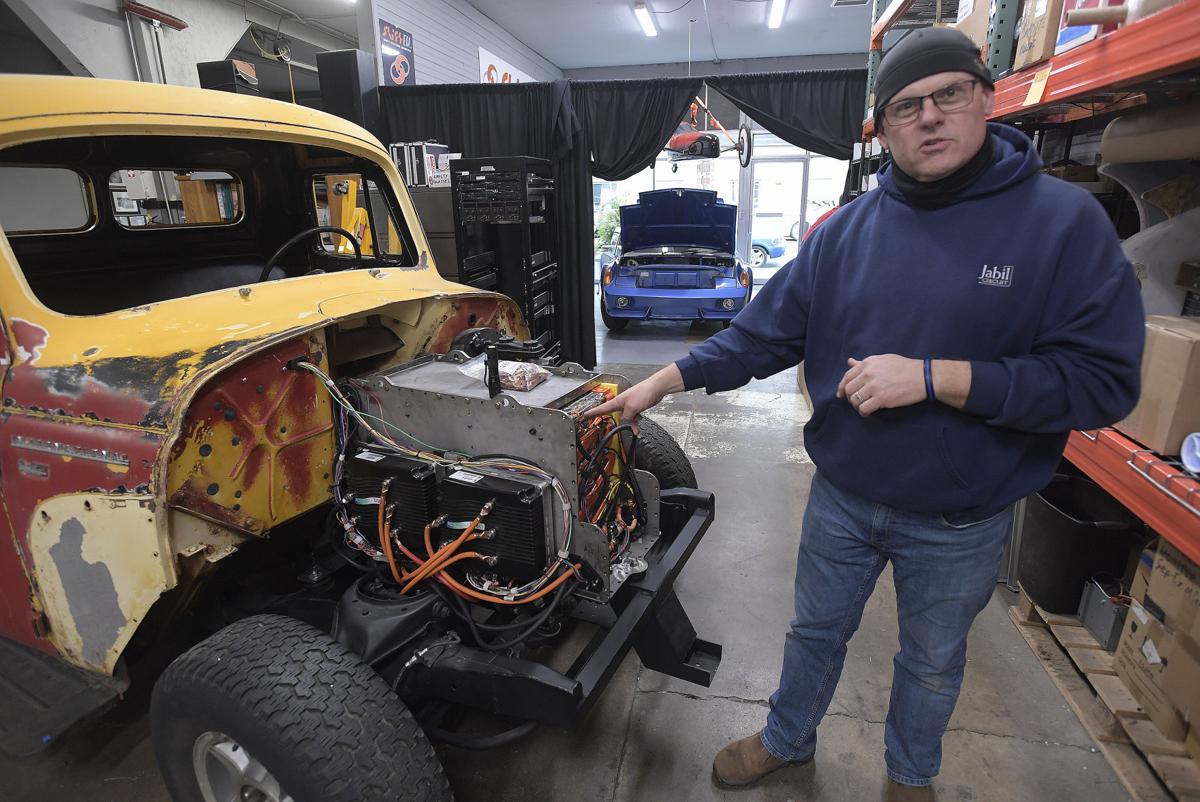 Chris McMasters talks about the wiring he did on an International pickup at Shift Electric Vehicles on Second Street in downtown Albany. 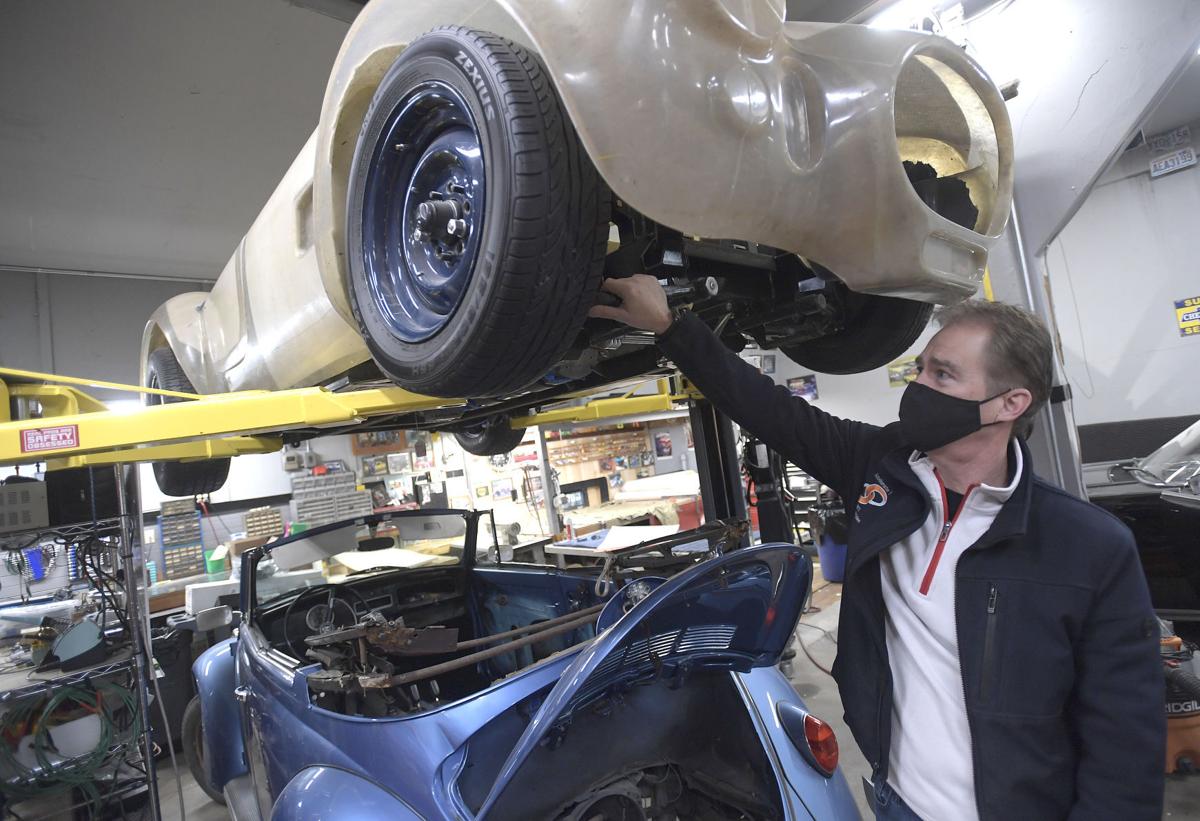 Volkswagens, such as the blue convertible on the floor of the Shift Electric Vehicles shop, are less complicated to convert; however, one of owner Kirk Swaney's projects is to electrify a fiberglass Cobra that he has pieced together from a couple of fiberglass bodies he found for sale on the Internet. 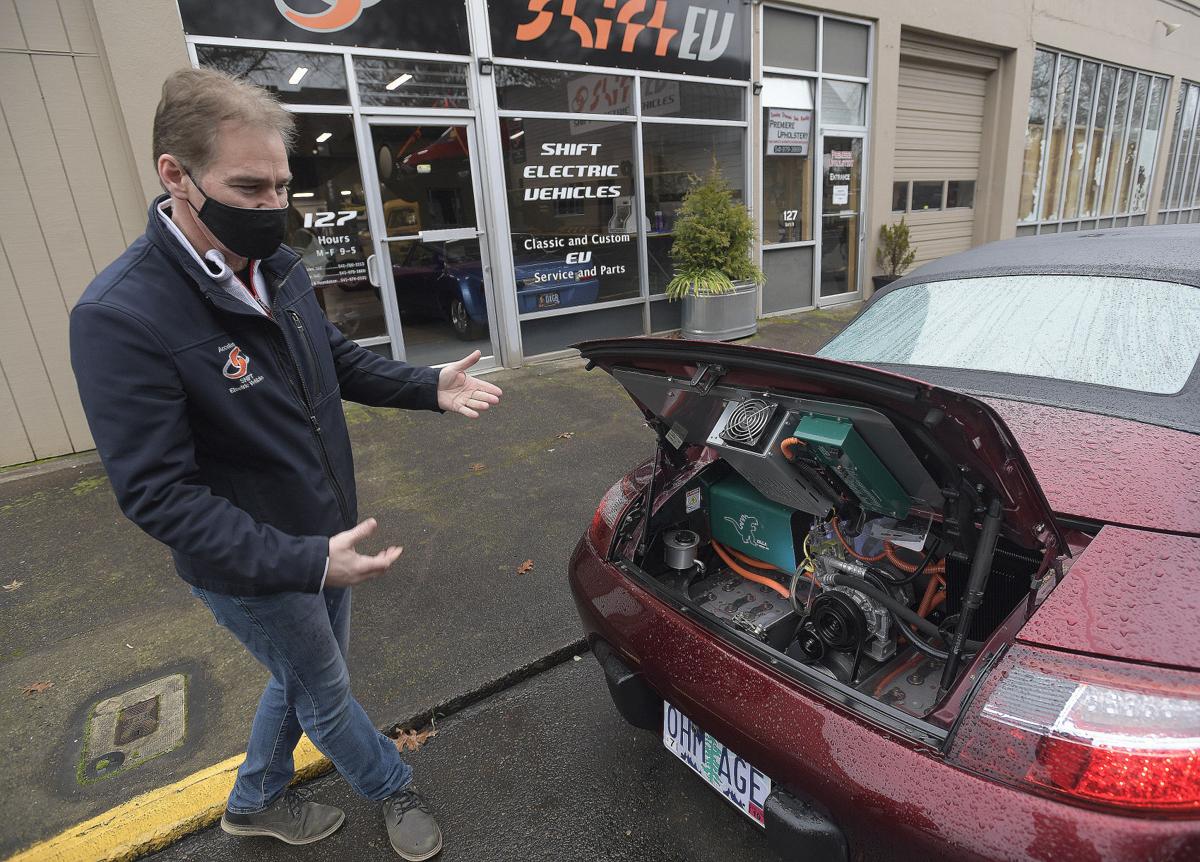 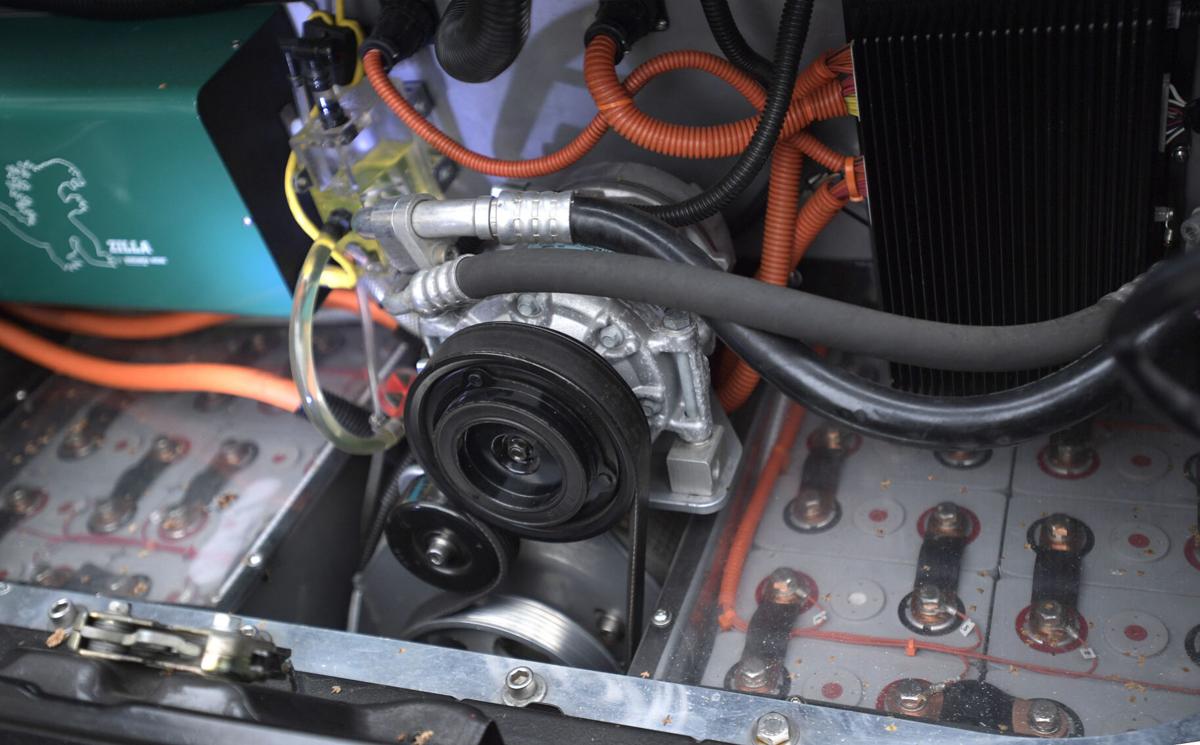 A Porsche modified to run on electricity features an air conditioning pump. 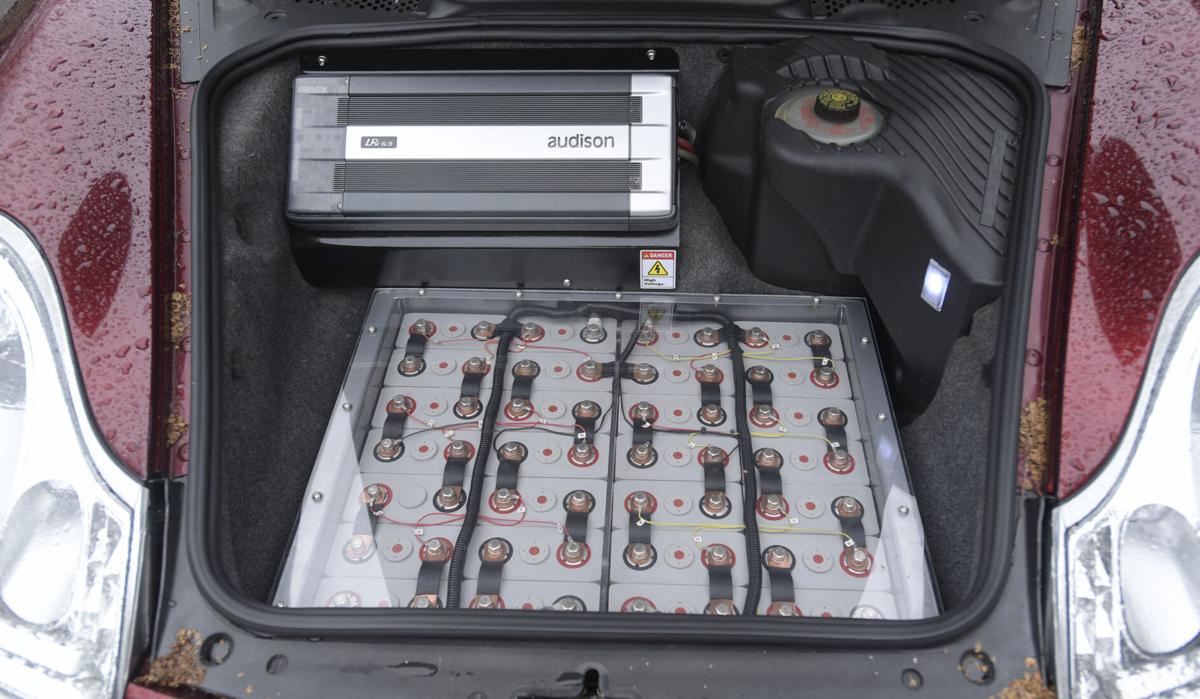 Lithium batteries inside the hood of a Porsche Shift Electric Vehicles modifed.

Kirk Swaney, owner of Shift Electric Vehicles in downtown Albany, is a man well ahead of his time.

In recent weeks, international automakers including General Motors, Ford and Jaguar announced plans to switch the majority of their production to all-electric power plants, away from fossil fuel-based internal combustion engines.

Swaney has been converting classic fossil fuel-propelled vehicles to all-electric power for more than a decade, everything from Porsches to pickups and even a Rolls-Royce formerly owned by the late country music star Johnny Cash.

Swaney emphasizes that his company at 127 SE 2nd St. does not operate along the lines of Tesla, the California-based auto manufacturer that produced almost a half-million luxury electric vehicles in 2020 alone.

“We are a boutique EV conversion shop,” the 1983 West Albany High School graduate said. “Every job is different and is based on the customer’s needs and type of vehicle.”

Swaney added that unlike many of the custom car shops featured on television, his shop does not do bodywork or painting, although it does partner with local providers if the customer wants those services.

He also shares space with Premier Upholstery, so that type of work can be done in house.

Swaney has always been interested in anything with wheels, wings or rotors.

“I grew up building model cars and always appreciated other builders that focused on extreme accuracy,” Swaney said. “I also liked to build and fly radio-controlled planes and helicopters.”

For a time, he was interested in hovercrafts. He even went so far as to track down the builder of a hovercraft that was featured on the cover of Popular Mechanics magazine in 1971 and recovered the original shell in the California desert to restore it.

In 1995, his interest was piqued when he saw an electric vehicle competition at da Vinci Days in Corvallis called Electrathon America. At that time he worked at Hewlett-Packard, where his staff presented a proposal to the Corvallis site's general manager. Modest funding was approved for the team to build their first electric vehicle. That team continued for years and assisted other adult and student teams to build super-efficient electric vehicles for competition.

“I received good training and experience while working at HP,” Swaney said. “It was while I was taking a business class that my final assignment was to develop a sample business plan. That was when I developed the concept of etailing (selling parts online) to high schools and colleges across the country and founded DestinyParts.com.”

He left HP in 2008 and founded another business, Shift Electric Vehicles, to provide custom conversions of classic cars to electric power.

He ran both companies out of a modest shop at his home for several years and moved to the downtown location in late 2017.

Swaney said his shop — which employs three technicians — services 15 to 20 vehicles per year, sometimes doing completely new projects and sometimes upgrading vehicles that were converted 15 or 20 years ago to modern systems.

“It often takes months,” Swaney said. “There aren’t kits that apply to every vehicle. We listen to the customer’s needs, their vision of how the vehicle will be used and their budget. Increasing horsepower and range with a show-quality finish takes time and money.”

Swaney said there is a company in England that specializes in configuring Rolls-Royces, and those projects can cost more than $400,000.

“We took a new Tesla Model S and used everything we could from it,” Swaney said. “The original engine had three bad cylinders, frozen brakes and other drive train issues. We replaced it all with Tesla components, resulting in an additional 200 horsepower, stability control, electric power steering and much more.”

Swaney said custom touches stretch into the vehicle’s interior on most jobs as his crew modifies existing gauges to present useful information while retaining their from-the-factory look.

For example, a fuel gauge will indicate the state of charge, and other gauges are sometimes used to offer information about battery and motor temperatures.

Swaney said conversions to electric power have been popular among car enthusiasts for decades.

“There are a lot of vehicles out there that were converted a decade or two ago with lead-acid batteries,” Swaney said. “Many of those were classics that are now being upgraded with lithium batteries and more efficient motors by services like ours.”

Swaney drives an electrically-powered Honda that was originally converted in 1995. He and his staff are now building a Shelby Cobra replica that will have 600-800 horsepower and over 700 foot-pounds of torque.

“It’s for sale, but until someone comes along and wants it, I’m going to have fun with it,” Swaney said.

Before the COVID-19 pandemic, a group of electric vehicle enthusiasts from the mid-valley gathered monthly at Swaney’s shop to talk electric cars and tackle projects of others in the group.

“That is a great way to rub elbows and learn new things,” Swaney said.

In addition to what’s already in his shop, Swaney is working with a potential customer on the Oregon coast who wants to convert a fleet of classic VW's into electric-powered advertising vehicles.

“VW engines don’t like sitting around for long periods of time between use,” Swaney said. “With electric motors, all the owners have to do is turn it on and go.”

Swaney said the classic air-cooled Volkswagens and Porsches lend themselves well to conversions.

Swaney's team is in the process of converting a 1951 International pickup for a local customer. Chris McMasters has done most of the wiring on that project, while John Adams has designed custom battery enclosures for the Tesla battery modules to be installed under the truck bed.

Swaney said some customers come from the mid-valley and from across the country.

Although Swaney is sold on electric vehicles, like many hot rod enthusiasts, he sometimes misses the burbling sound of a mega-horsepower V-8 engine.

“There’s nothing like that rumble,” Swaney said. “It’s a beautiful sound. But those who haven't been in a fast electric car don't know what they're missing."

The Linn County Sheriff’s Office is searching for a man they believe attacked someone with a “large cutting instrument similar to a machete,” …

Traffic update: The Oregon Department of Transportation reports that Highway 20 has now reopened near Circle Boulevard in Corvallis after a ve…

A Senate hearing on legislation to alter Oregon gun laws drew a cavalcade of passionate opposition.

Hands off that gas pump!

The Oregon Health Authority reported on Thursday that the state has recorded its first infant death attributed to COVID-19.

Far-right lawmaker takes over Oregon GOP in larger US shift

The Lebanon Strawberry Festival court has been announced for 2021.

One of Shift Electric Vehicles' current projects, a 1951 International pickup owned by a local family.

Kirk Swaney, owner of Shift Electric Vehicles, starts up a 1951 International pickup his company in downtown Albany is converting to electric power. When finished, the pickup will have Tesla batteries under its hood and in the pickup bed.

Chris McMasters talks about the wiring he did on an International pickup at Shift Electric Vehicles on Second Street in downtown Albany.

Volkswagens, such as the blue convertible on the floor of the Shift Electric Vehicles shop, are less complicated to convert; however, one of owner Kirk Swaney's projects is to electrify a fiberglass Cobra that he has pieced together from a couple of fiberglass bodies he found for sale on the Internet.

A Porsche modified to run on electricity features an air conditioning pump.

Lithium batteries inside the hood of a Porsche Shift Electric Vehicles modifed.