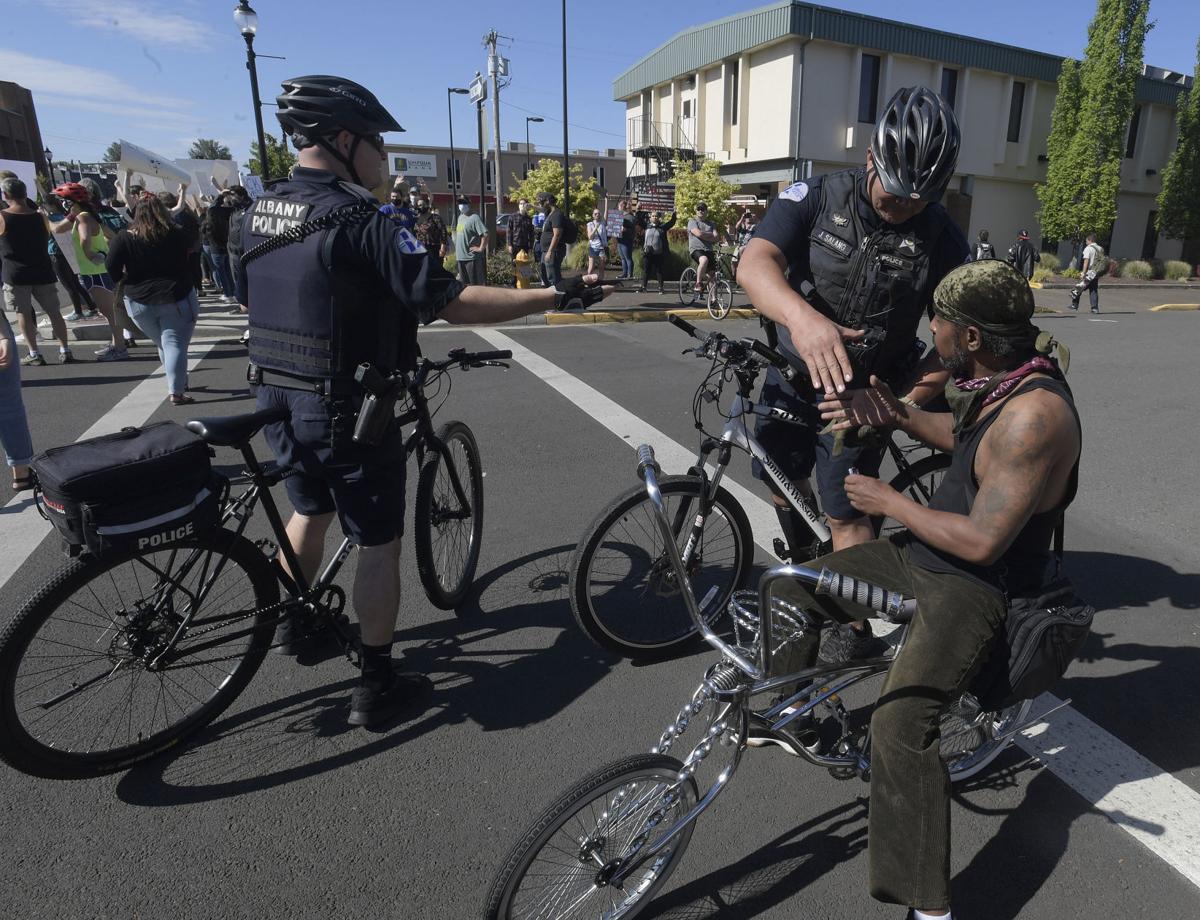 Albany police officer Jorge Salang shakes hands with Albany resident Tracy Chatton during the Racial Justice Protest in Albany earlier this month. Police Chief Marica Harnden said, "Every contact (by her officers) is a chance at ambassadorship for the profession." 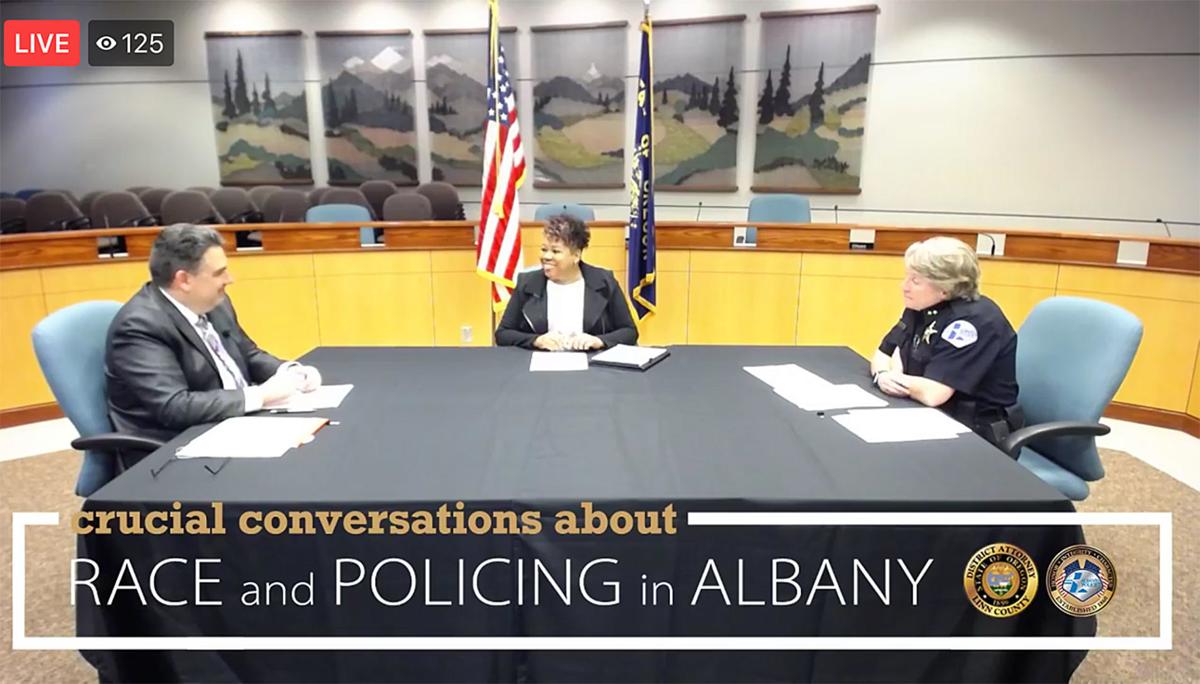 Floyd, who died in Minneapolis after a police officer pressed his knee into his neck for more than 8 minutes as other officers stood by, is the latest in a series of highly publicized deaths of black men and women at the hands of police officers. Those calling for change have cited an inequality in the treatment of white people and black people in police custody and in the wake of their deaths, calls to implement policies to prevent future abuse have grown.

"We could do more," Albany Police Chief Marcia Harnden said Wednesday during a Facebook Live conversation to address the department's current policies and the growing concern surrounding inequity in the way officers interact with the public.

Harnden, who was sworn in as the first female chief of the department in February, was joined by Linn County D.A. Doug Marteeny and community pastor Heather Carmichael.

For 45 minutes, both Harnden and Marteeny attempted to answer some of the 85 questions submitted by community members as Carmichael moderated.

Questions revolved mostly around the department's efforts to reach out to the black community and communities of color as well as policies like the call to implement the 8 Can't Wait program, which outlines eight specific policy steps that police departments can take, including the banning of choke holds and other use-of-force restrictions. In some of the departments at the center of incidents involving the deaths of black men and women, these policies were already in place at the time of those incidents.

Harnden said the Albany Police Department already has these measures in place and has been working to reach out to communities of color.

"You can't build trust and a relationship in a crisis," she said. "Trust isn't a light switch; you can't just turn it on. It takes forever to build that trust, and one bad incident, whether it's in Albany or Minneapolis, can set us way back."

In terms of diversifying the police force, Harnden said the department had work to do and cited a nationwide failure to recruit people of color for law enforcement jobs.

"Most police chiefs will tell you it's very difficult in today's climate to attract anyone, let alone people of color, to police work," she said, citing a July event aimed at recruiting more diverse applicants to the department.

Marteeny echoed Harnden's statement and added that in the district attorney's office, the hiring process did not take diversity into account.

"In the end, we're looking for talent," he said. "When we make our decisions for hiring, race, color, sex, gender — it doesn't play a role in our decision-making. In the 2010 Census, Linn County was about 90% white. In our office, we are 15% people of color. In command staff it's 29%, and half are women. As we've looked for talent, that's how it's shaken out and we've been blessed."

Questions surrounding training garnered a slew of answers, with both Harnden and Marteeny noting that their employees undergo training in diversity, access to justice, implicit bias, ethics and more.

"Training is fine, but the culture has to embrace it and practice it," Harnden said, citing an incident over the last weekend. According to Harnden, a person of color was approached by officers with felony warrants for arrest.

When asked how the department feels about communities of color distrusting police despite community outreach, Harnden said it wasn't an easily solved problem.

"I understand it," she said. "I acknowledge it and I think it's legitimate in a lot of respects. It's been a rough few weeks in this country with well-placed emotion, but one of the things we've talked about internally is a fundamental shift in law enforcement," she said, citing what she described as widespread condemnation of the events in Minneapolis.

"I can't control what happens in other cities. I can control what happens here and hire good people and have policies in place. Every contact is a chance at ambassadorship for the profession," Harnden said. "If you treat someone like garbage, that's what they think of all police."

When the Albany Police Department was formed in 1891, it consisted of one man: the marshal. In the 129 years since, it's moved around the city…

A Linn County man was arrested on June 17 for sex crimes and endangering the welfare of a minor.

American Legion Post 10 in Albany will not be losing its charter on Friday. Whether the post will remain beyond that date is still unknown.

Harrisburg teacher under fire for photo

A Harrisburg High School teacher allegedly posted an image to social media that has drawn criticism in the community.

Albany police officer Jorge Salang shakes hands with Albany resident Tracy Chatton during the Racial Justice Protest in Albany earlier this month. Police Chief Marica Harnden said, "Every contact (by her officers) is a chance at ambassadorship for the profession."