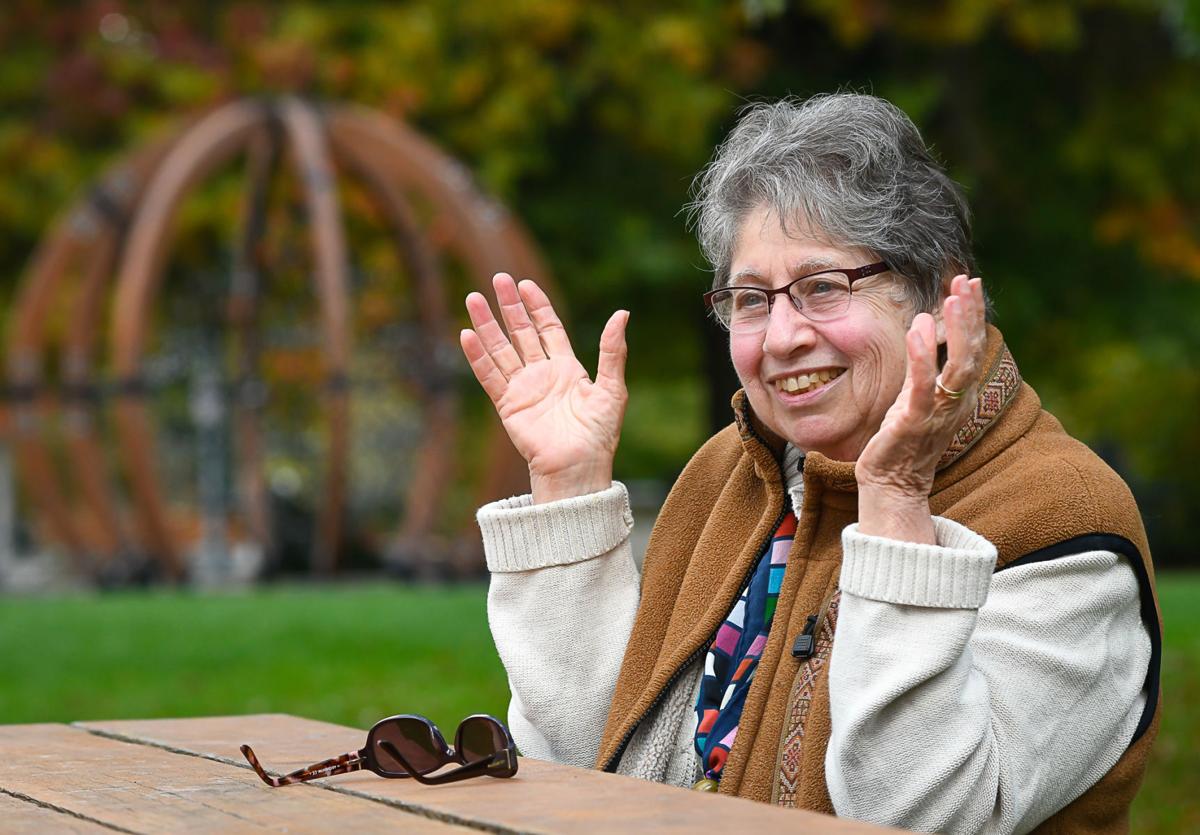 Paula Krane of Corvallis was one of the petitioners for Ballot Measure 60, the vote by mail initiative that Oregon voters passed in November of 1998. 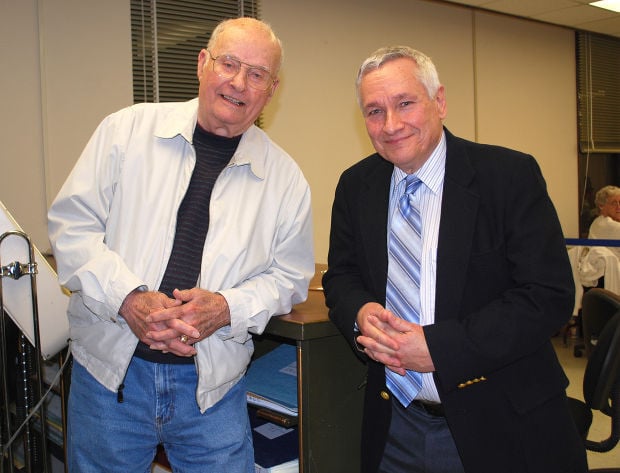 Former Linn County Clerk Del Riley, left, is shown with the current office holder, Steve Druckenmiller, in 2015. Riley is given a huge share of the credit for the existence of vote by mail in Oregon. 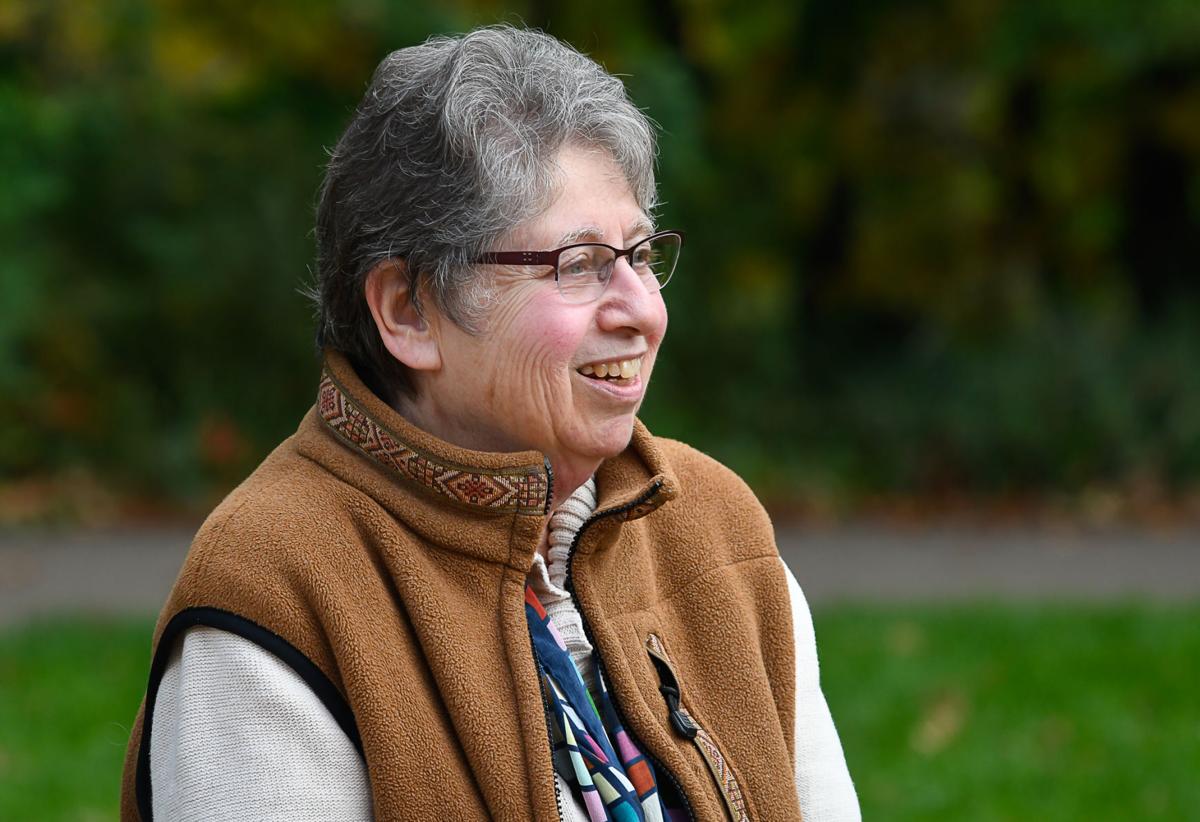 Paula Krane of Corvallis found her way to working on vote by mail through her long-time association with the League of Women Voters.

As we head into the final 10 days of an astonishingly polarized election, with numerous states engaged in lawsuits and turmoil with their voting procedures … Oregon just keeps motoring forward.

The state has used vote-by-mail exclusively since a 1998 ballot measure passed. It was the first state to take the plunge.

It wasn’t an easy ride to get there. Ironically, early in the political discussions about the issue, Oregon Republicans favored the concept. And Democrats didn’t. In fact, the Legislature, with Republicans in the forefront, passed a bill in the dying moments of the 1995 session to approve vote by mail for any election in Oregon. And then-Gov. John Kitzhaber, a Democrat, encouraged by the national party, vetoed it.

Politically, the allegiances have flipped. Now, Democrats are more likely to favor vote by mail, while Republicans, taking a cue from President Donald Trump, claim that it leads to fraud.

It’s an old argument. In the 1998 voters’ pamphlet in the arguments against Measure 60, opponents said vote by mail would “invite more vote scams, foster corruption, trivialize voting and deprive everyone of the option of casting a secret ballot in a protected and secure voting place.”

Those claims have been debunked over and over.

Low turnout? Former Oregon Secretary of State Phil Keisling, a key figure in the vote by mail effort, noted that 71% of Oregonians turned out for the 2014 midterm in an election that Keisling called “one of the dullest in recent memory.” The national total? 48%.

Keisling had a lot of help in getting vote by mail from a gleam in the eye to the law of the state. And two mid-valley individuals played huge roles. Paula Krane of Corvallis got involved in the effort through her association with the League of Women Voters. Meanwhile, Linn County Clerk Del Riley also worked via different channels on the concept. And they both wound up working tirelessly for Measure 60.

Here is a closer look at the two vote by mail pioneers:

Krane, a former school teacher and a Corvallis resident since 1974, has 50-plus years with the League of Women Voters. And she is extremely proud of the League’s approach.

“The League of Women Voters’ philosophy is we want you to be politically active,” she said, “but we are nonpartisan when working on a project even though we all have our own opinions.”

The League is known for studying issues thoroughly as well, for example, the in-depth work the Corvallis chapter has done on housing and homelessness.

“The League does things in a real methodical way,” she said. “We study it … to death sometimes. Then we come up with the pros and cons. Then we discuss it.”

The League took just that approach to analyzing vote by mail, and when Keisling began looking for individuals to help lead the 1998 election campaign he called in Krane, who then was president of the League’s state board.

Keisling was smart enough to know the push for the measure needed to be as far away from partisan politics as possible. So he encouraged Krane to be one of the chief petitioners.

Krane took the idea back to her board, which said yes, and she “began a two-year ride. We had done the research and this was the way to go.“

Krane participated in press conferences in Oregon and in Washington, D.C., the first of her life. She collected signatures at the Farmers’ Market and out in front of Fred Meyer.

“I personally grew a lot,” she said. “I was working on something important. None of us likes change, which can be good and exciting but also scary. And we won overwhelmingly. It was one of the highest ‘yes’ votes ever. I came away from the campaign with a very good feeling. I felt like I had contributed something to Oregon and helped make a positive change.”

The best thing about vote by mail, Krane said, is how it boosts turnout. For everyone.

If you are in ill health you don’t have to drive to the polls. If you are employed and have trouble getting time off you can still vote. Ditto with those who have children at home. And if the weather is cruddy, as it was for the January 1996 special U.S. Senate election between Ron Wyden and Gordon Smith, voters could look, smilingly, out the window at the cold … after already voting by mail.

“I really think that vote by mail is the way to go,” Krane said. “Paper ballots, a permanent record and no voting machines.”

But she adds that “I still miss going to the polls on election day.”

Riley, who died in August of 2018 at the age of 93, first began working on vote by mail in 1981. His idea was pretty simple and it began with a simple question, according to a guest column Keisling wrote for the Oregonian at the time of Riley's death.

Riley, Oregon Secretary of State Norma Paulus and a group of legislators tagged along in the spring of 1981 to observe an experiment with vote by mail in San Diego. They came back inspired and the Legislature responded later that year by passing a two-year trial.

Although early tests were promising and included an off-year election that produced 75% voter turnout the going was slow. Not until the mid-1980s were more than a few counties willing to try it. And then there was the Kitzhaber veto after Riley and other county clerks helped get the 1995 Legislature to pass it.

Three years later, in 1998, the paths of Krane and Riley crossed during the Measure 60 campaign. They had not met previously.

“Even though he supported the issue as a public employee he was limited in what he could do and say,” Krane said. “He was a very early supporter and very vocal about the issue before the Legislature when they were debating VBM and as much as he legally could during the signature gathering process and then the election process.”

And the rest is history.

See Page A4 for a timeline on vote by mail in Oregon.

1981: The Oregon Legislature approves vote-by-mail for local elections, at the discretion of the county. At least one polling place in the county had to remain open on election day.

1987: Vote-by-mail becomes permanent, with the majority of Oregon's counties making use of it.

1992: A state task force on local government services identifies statewide vote-by-mail as one of the most significant opportunities to save money on conducting elections.

1996: U.S Sen. Ron Wyden, a Democrat, is elected by mail with a 66% turnout in a special election in which he defeated Gordon Smith. Wyden succeeded Bob Packwood, who had resigned amid sexual misconduct allegations.

1998: Oregonians confirm their overwhelming support for vote-by-mail by passing Measure 60, with 69.4% favoring the measure and 30.6% opposed.

2000: Oregon becomes the first state in the nation to conduct a presidential election entirely by mail. About 80% of registered voters participate.

A man broke into an Albany home on Monday around 4 a.m. and sexually assaulted two girls under the age of 10, according to a press release fro…

The Oregon State Police reported that a woman died in a single-vehicle crash at about 11:30 a.m. Monday near milepost 1 of Highway 164.

Albany Police continue to investigate break in and sex abuse

There were no available adult intensive care unit beds in Linn and Benton counties on Monday, according to the Oregon Health Authority.

Two more coronavirus-related deaths have been reported in the Linn-Benton area.

Linn County Sheriff Jim Yon is not seeking reelection next year, it was announced Tuesday afternoon in a press release from the county.

It was perfect Scottish weather, according to Shelley Reed of Albany.

Gilbert Seid decided after 50 years that it was perfect time to retire. And to top it all off, his career culminated with a prestigious award.

Paula Krane of Corvallis was one of the petitioners for Ballot Measure 60, the vote by mail initiative that Oregon voters passed in November of 1998.

Former Linn County Clerk Del Riley, left, is shown with the current office holder, Steve Druckenmiller, in 2015. Riley is given a huge share of the credit for the existence of vote by mail in Oregon.

Paula Krane of Corvallis found her way to working on vote by mail through her long-time association with the League of Women Voters.