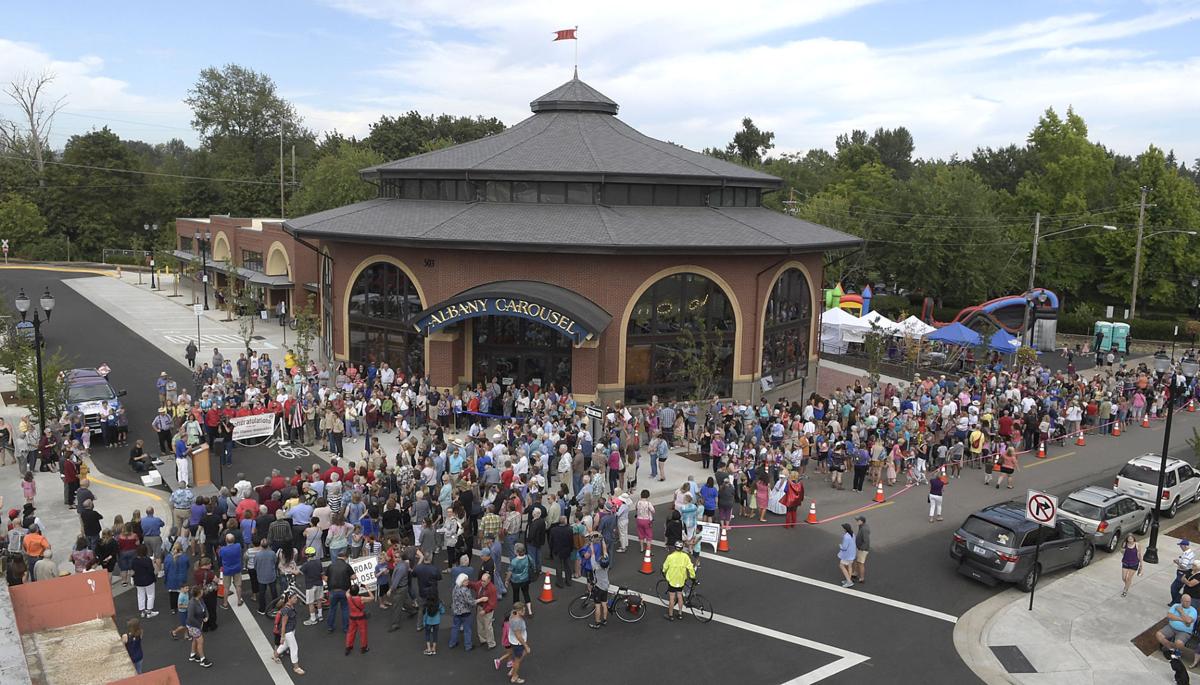 Hundreds of people, young and old, gathered at First Avenue and Washington Street for the grand opening of the Albany carousel Tuesday morning. 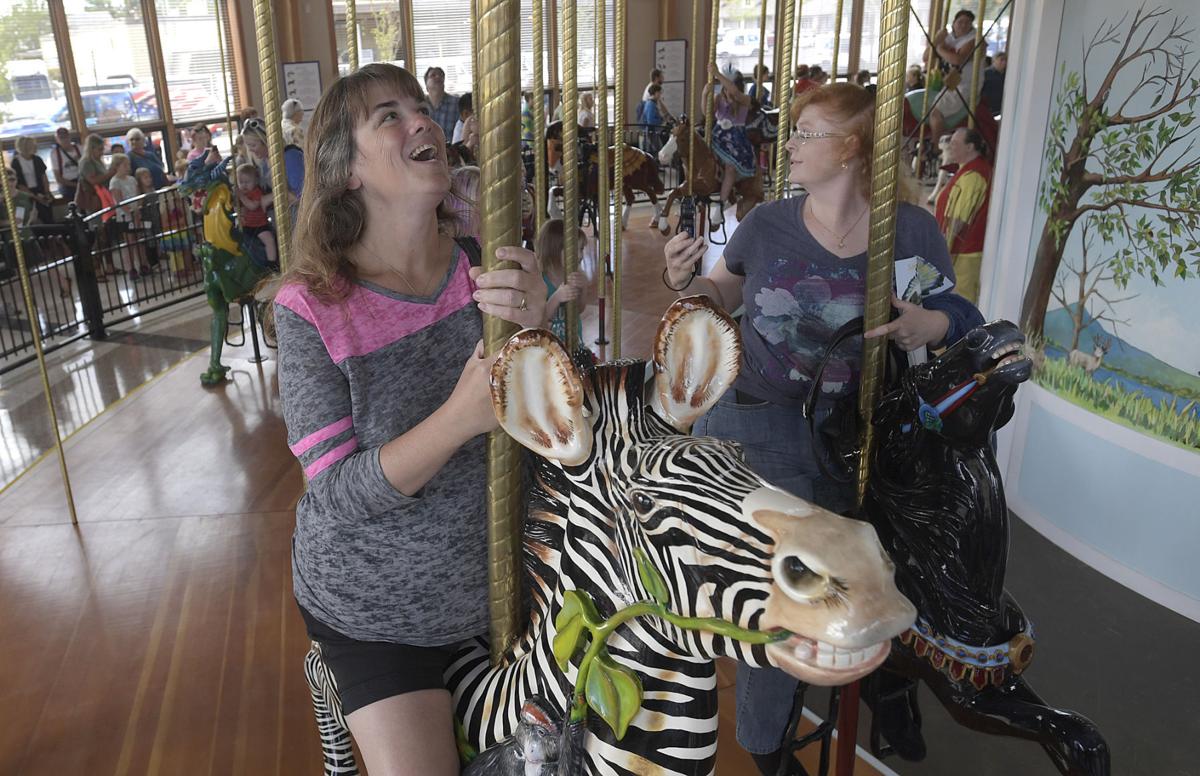 Marcy Hermans of Tangent, left, was the first person in line for the Albany's Historic Carousel & Museum public ride, following the children's inaugural spin. She chose Zeus as her mount. 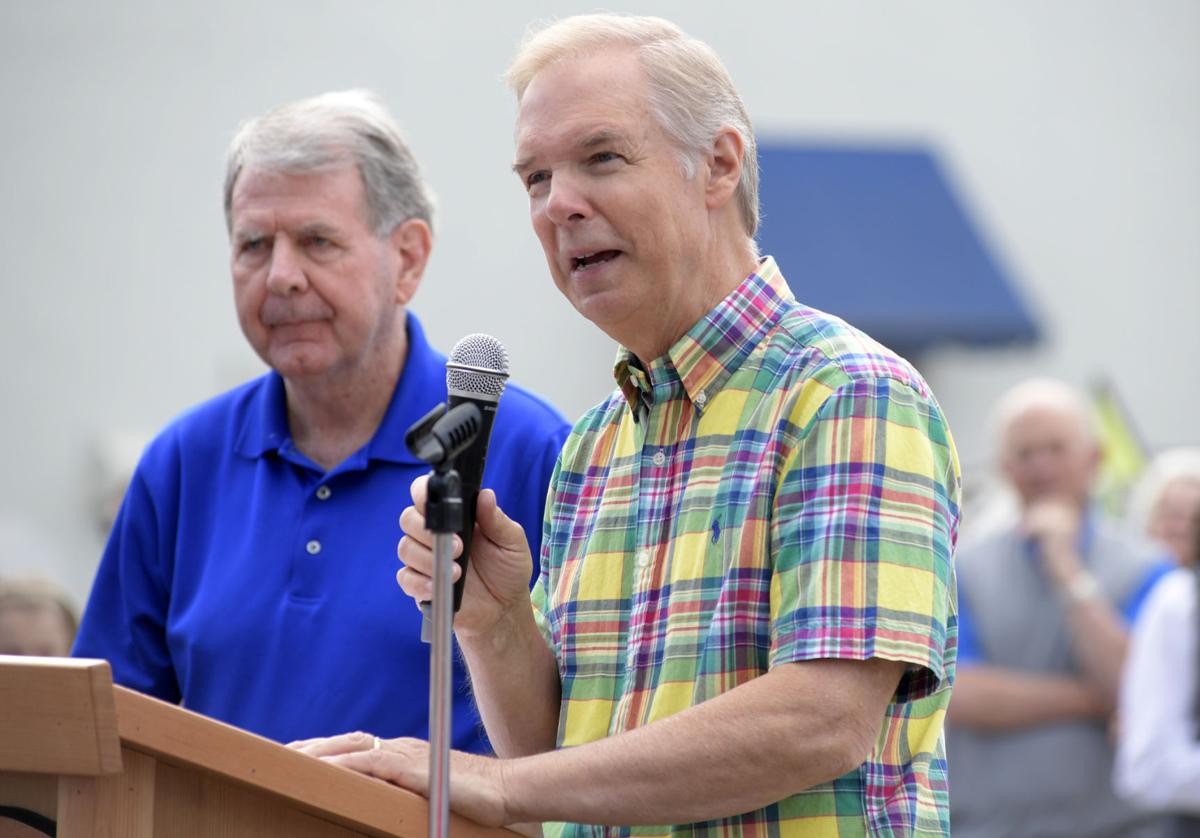 Former Portland TV personalities and Albany natives Mike Donahue, right, and Wayne Faligowski were the masters of ceremonies for the ribbon-cutting. 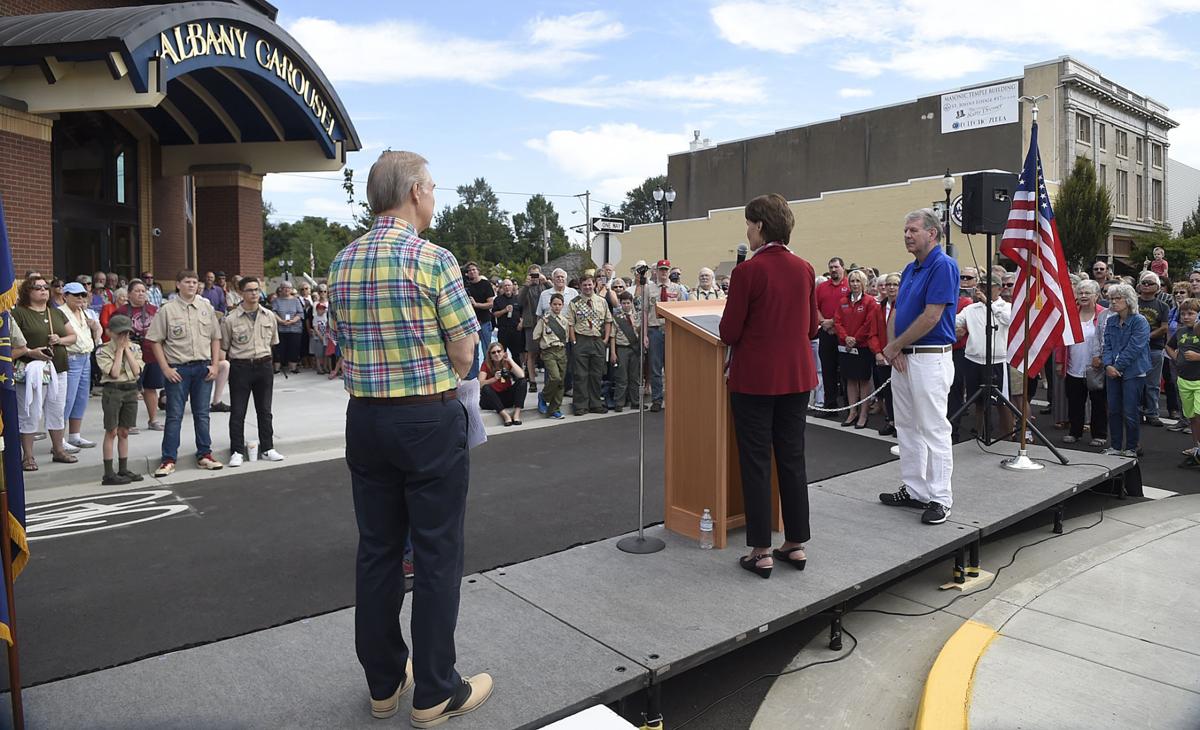 Albany mayor Sharon Konopa delivers a speech at the event.

One hour into the day's celebration, they were already printing 1,000 more.

"I see a lot of happy people," said Jenifer Weinmaster, operations director for the carousel, which marked its grand opening and ribbon-cutting Tuesday. "That makes me happy."

Hundreds of spectators filled the intersection at First Avenue and Washington Street, lining up to be among the first to ride a moving work of art. The lines continued through the evening, to closing time at 7.

Carvers, painters, designers, engineers, mechanics, builders, fundraisers and other volunteers have put more than 200,000 hours into the 15-year carousel project.

Each of the 30 animals completed so far took some 2,000 hours to carve and another 400 or so to paint. Another 20 are so are still in the works.

Wendy Kirbey of Albany, who first brought the idea to town after visiting a hand-carved carousel in 2002 in Missoula, Montana, snipped the ceremonial ribbon with a huge pair of scissors.

Her grandson, Aiden Kirbey, 1 1/2, had the honor of receiving Boarding Pass No. 1. With the help of his dad, Adam, he perched on a shaggy dog named Munchie for the carousel's inaugural spin.

The ride for the Kirbey family has been metaphorical as well as literal, Adam said, smiling. "There's been the ups, there's been the downs, but here we are: the fruit of 15 years of hard work from a lot of people."

Thirty-one children were tapped specially to take the first ride, including Owen Robinson, 10, who checked out the wheelchair-accessible chariot.

"We're so excited to have a carousel close to home," said his mother, Tonya-Jo Robinson.

Owen's chair is longer than most, but the chariot could still accommodate him, a special bonus, Robinson said. "What's really exciting is the accessibility. It looks like it's going to be big enough for anyone who wants to ride it."

Outside, Marcy Hermens of Tangent led the line for the general public. She arrived at 7:15 a.m. for the spot, beating the next closest person — carousel volunteer carver Oweta Smith of Albany — by 15 minutes.

"I love carousel horses," Hermens explained. "Everyone has something they collect, and I collect carousel horses. I've been waiting 15 years since they first started talking about this for this to become a reality."

Hermens' husband bought her a fundraising brick for their anniversary, and a print of one of the planned animals, a standing stallion named Morgan, for Christmas. Morgan isn't yet ready to ride, so Hermens clambered aboard Zeus, the zebra, instead.

"That was incredible. It was so fun," she gushed afterward. "And I felt like a child."

Children of all ages, even ones that looked suspiciously like senior citizens, pressed their noses to the carousel's windows to watch the first spins while they waited their turns.

Inside, after the finishing their rounds, visitors wandered through the gift shop and museum and added their comments to a rapidly-filling guest book.

Visitors from Washington, California and South Dakota were among those who penned their thoughts in the guest book. "Worth the wait!" one local wrote.

John Kiger and his wife, Connie Esmond, moved to Newport from Ohio a year ago. They have friends in Corvallis and and have been watching the carousel's progress for the past seven years.

At some point a horse named Kiger — no relation — will join the carousel's menagerie, but John Kiger settled Tuesday for a magnet bearing his picture, and a ride on a horse named Little Sheba.

"We just wanted to see it on opening day," he said.

Added Esmond: "We have told people to make this a destination — and it is."

Lynn Whitacre, who has volunteered as a carver and in the gift shop, also made it a point to be one of the morning's riders. The best part of opening day, she said, is that with additional carvings still to be finished, the celebration is far from over.

"We'll just keep having parties every time there's a new animal," she said.

Riley Bond, 13, was part of the children's first round and said she was thinking of aiming for a spot on The Guardian, a hippocampus that also serves as the carousel's logo.

"My mom (Rebecca Bond of the Albany Visitors Association) says I was the youngest volunteer, because I ate baby food, and the containers were used for paint," the teen explained.

A half-hour of speeches and presentations preceded Tuesday's first rides.

Former Portland newscasters and Albany natives Mike Donahue and Wayne Faligowski took turns on the microphone as master of ceremonies. Mayor Sharon Konopa welcomed the crowd and Kirbey brought up members of the board of directors and other longtime supporters for a sustained round of applause.

Donahue said in past years, Albany was known by many just as a place to grab some gasoline and a bite to eat before continuing along Interstate 5.

"Today we are giving all those travelers a reason to come to Albany —downtown!" he said, cueing up the Petula Clark tune of the same name and leading the audience in the chorus. "This carousel is making Albany a destination now on Oregon's tourist map."

Marie Bradford-Blevins, executive director of Salem's Riverfront Carousel, and Laura Tea-Pelley, assistant director, made a special appearance to award Kirbey "The Guardian of the Light." That's an annual honor their organization bestows on "special people who help keep the dream alive," Tea-Pelley said.

During her turn at the podium, Kirbey said she'd forego a long speech and do her best not to get emotional.

Instead, she said, she'd share "the biggest compliment I've ever been given in my life: the fact that these people took my idea and made it theirs."

For more information, call the site at 541-497-2934 or see online information at http://albanycarousel.com/.

Gallery: Opening day of the Carousel

Two new carved animals have joined the Historic Carousel & Museum of Albany family, and the public's invited to meet them starting at 10 a…

Before the carousel started an operator rang an old-fashioned hanging bell to warn riders it was about to start.

Hundreds of people, young and old, gathered at First Avenue and Washington Street for the grand opening of the Albany carousel Tuesday morning.

Marcy Hermans of Tangent, left, was the first person in line for the Albany's Historic Carousel & Museum public ride, following the children's inaugural spin. She chose Zeus as her mount.

Former Portland TV personalities and Albany natives Mike Donahue, right, and Wayne Faligowski were the masters of ceremonies for the ribbon-cutting.

Albany mayor Sharon Konopa delivers a speech at the event.