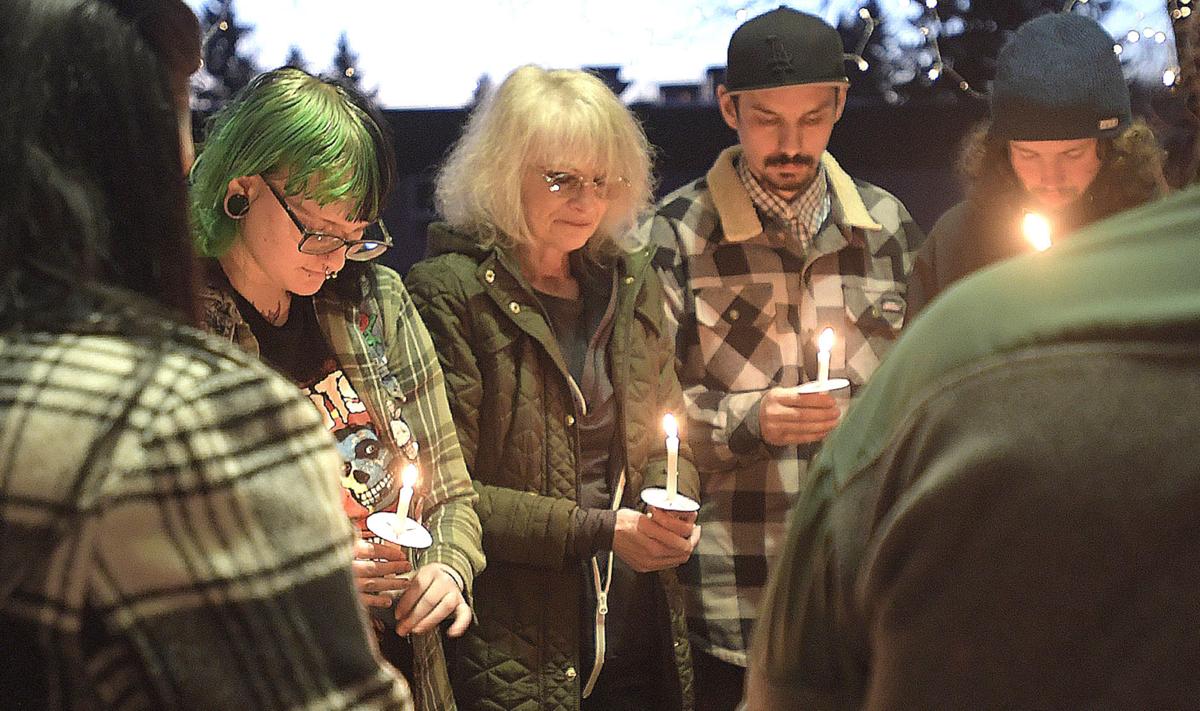 Tiffany Lazon's daughter Felicity Halberg, mother Zodelle Sales and brother Patick Tsutsui pray with friends and family while remembering the life of the missing Albany woman at the Owen Rose Garden in Eugene in February. 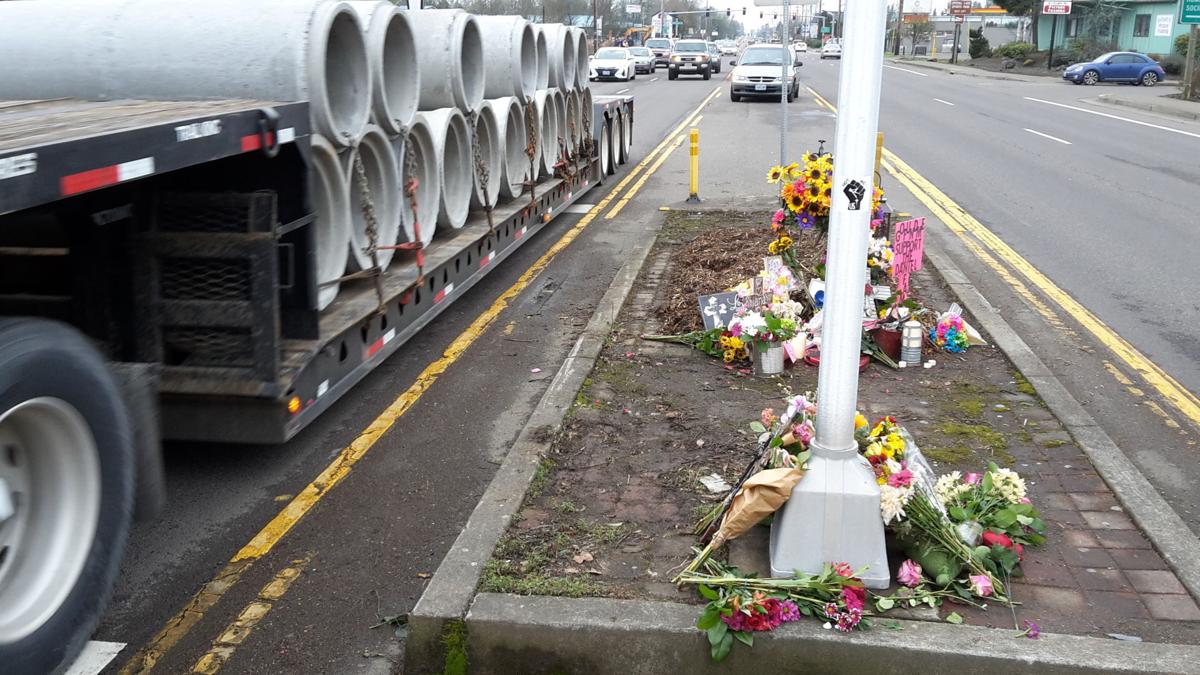 Traffic heads past the concrete island and memorials to Rhiana Daniel on Highway 99W in South Corvallis in this January photo. 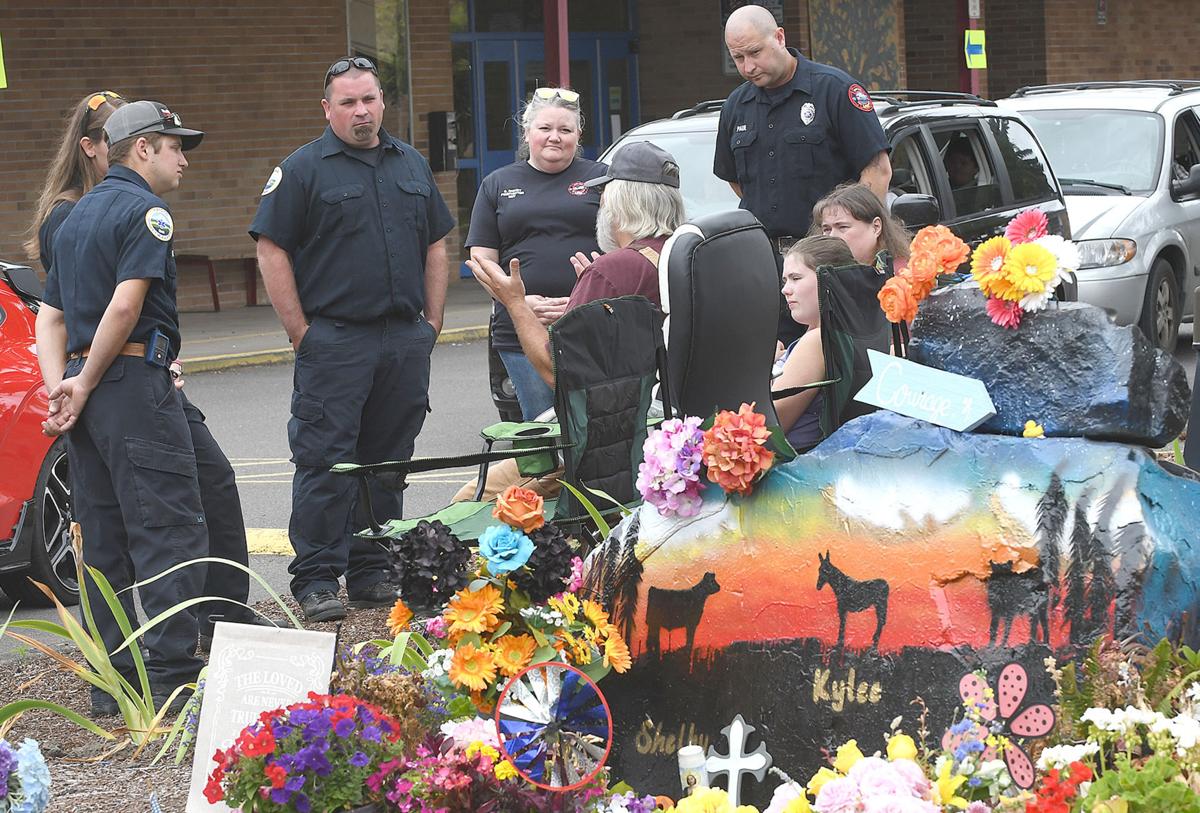 During an event in June, Jim Simonis talks to Sweet Home public safety workers who responded to a crash that killed two of his children. 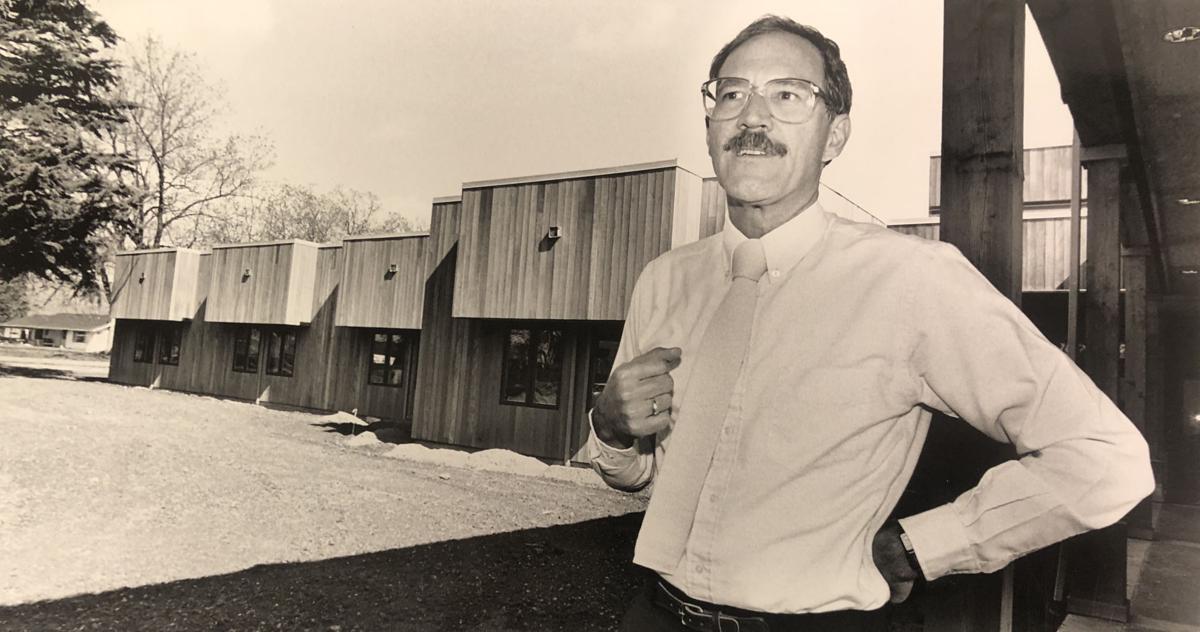 William Henry "Hank" Dufort is shown on the Children's Farm Home campus while he was director of the Benton County facility. 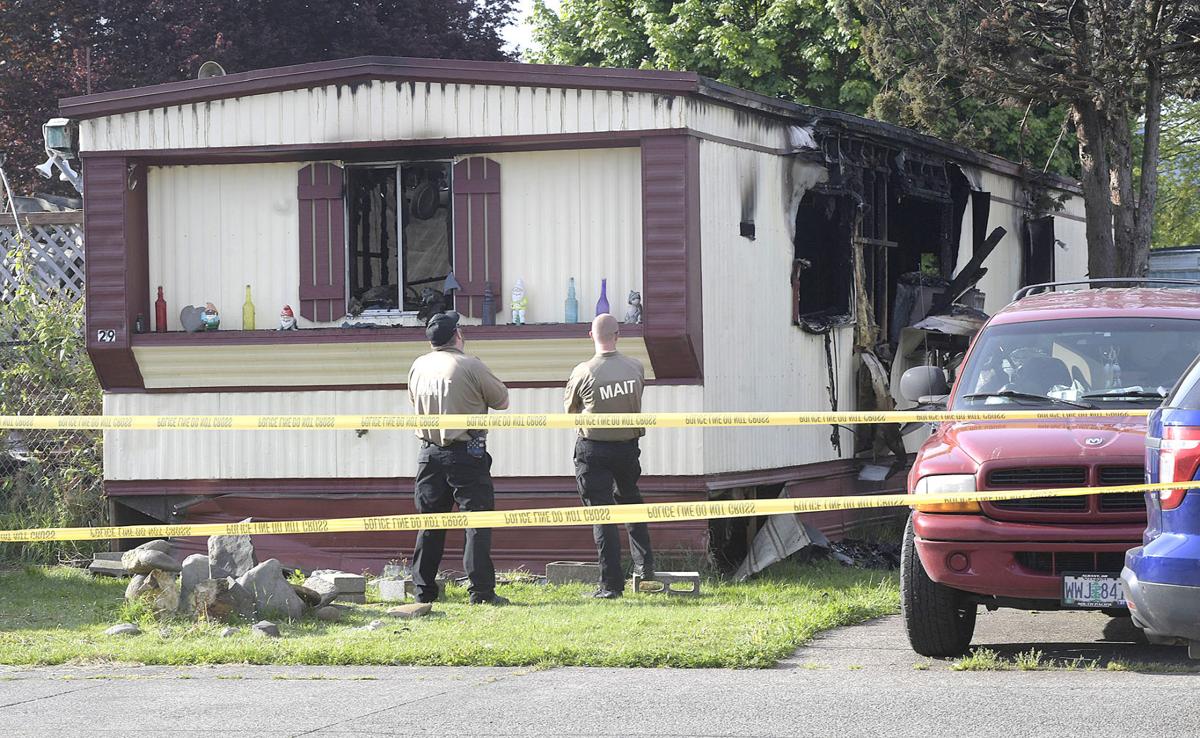 Investigators from Linn County's multiagency investigation team inspect the scene of a fire in Sweet Home where four bodies were discovered.

The public safety beat generated plenty of news in 2020 even if you didn’t include devastating wildfires that ripped through portions of Linn County and sent smoke pouring over the state.

There were notable successes, such as how local law enforcement handled Black Lives Matter protests in Albany and Corvallis.

The stories that stick with readers, unfortunately, are the tragedies. And, like any other year, there were far too many of these for the mid-Willamette Valley.

Here’s another look at some of the most important, and most awful, stories from the public safety beat in 2020.

Albany resident Tiffany Lazon was reported missing in January. Last seen by her family in November, Lazon had been in a relationship with Craig Lazon that was documented as being abusive.

In January, Craig Lazon was arrested on murder charges after a friend came forward and revealed that Lazon had borrowed a saw and returned it in pieces. Tissue and blood found on the saw were a match to Tiffany Lazon. Her disappearance sparked a conversation about domestic violence and resources available in the mid-valley. Craig Lazon has yet to go to trial.

The mid-Willamette Valley had three other murder investigations in 2020 as well.

Ryan Williams, 22, is charged with second-degree murder for allegedly shooting his mother’s fiancé, Glenn Colvin, 50, in the family’s North Albany home on March 17. Colvin was found lying on his back in his bed.

Kris Fiala, 54, was arrested on a second-degree murder charge after allegedly stabbing his 85-year-old mother in their Lacomb-area home on Dec. 1. Fiala was reportedly intoxicated and had become upset with Astrid Gladys Fiala.

A Portland man was found shot to death on Dec. 5 in a field near Jefferson. On Dec. 21, Phillip Gurule, 59, of Portland was charged with first-degree murder for the killing of Richard Anderson, 41. Gurule had previously been convicted of a murder in Multnomah County in 1988.

There has been a series of tragic deaths on Highway 99W in South Corvallis.

First, cyclist Eric Austin was killed in a crosswalk incident near the First Alternative Co-op in June of 2018.

Then, in October of 2019, cyclist Jeremy Gruver was struck and killed on Highway 99W just a few hundred yards north of where the Austin incident occurred.

But the third one was the worst for the community to absorb. On Jan. 9, 11-year-old Rhiana Daniel died after being struck in the same crosswalk in which Austin was killed.

The deaths helped accelerate the timetable for improvements to the pedestrian crosswalk lights on South Third Street, and the Oregon Department of Transportation has begun a safety study of the corridor.

Two Sweet Home siblings, Caleb Simonis, 19, and Shelby Simonis, 16, were killed in a head-on wreck on Highway 228 near Brownsville in May. The driver of the other vehicle was allegedly drunk.

The crash stunned mid-valley residents. Caleb was a 2018 graduate of Sweet Home High School. Shelby was a junior at Central Linn High School, where a makeshift memorial sprang up for the siblings. Both seemed to have bright futures ahead of them. Their sister, Kylee Simonis, also was seriously injured in the crash.

The driver of the other vehicle, Austyn Wayne Hillsman, 22, faces charges of two counts of first-degree manslaughter, second-degree assault, driving under the influence of intoxicants and reckless driving.

Dufort’s trial shook the mid-valley, as onlookers had to reconcile the fact that a seemingly respectable individual could be capable of repeatedly molesting boys who were seeking help. Dufort, 80, served more than 30 years in the custody of the Oregon Department of Corrections.

“It involved so many victims, not just in terms of numbers, but in terms of the vulnerability of these children who were left in the defendant's care … and left in his care in a secured setting,” Haroldson said. “Those were the circumstances in which he preyed upon children to satiate his perverse impulses.”

Guilty except by insanity

A mentally ill woman armed with a knife tried to murder three local law enforcement officers and commit “suicide by cop” in an Albany neighborhood on April 27.

Micayla Martin went to the home of a Linn County Sheriff’s Office deputy with a knife looking for a “sheriff” to kill, and she called 911 and told a dispatcher what she was doing.

That deputy, and Albany Police Department officers who responded, used restraint in dealing with the situation, and Martin was taken into custody with less-lethal weapons, including electric stun guns.

In November, Martin was committed to the Oregon State Hospital after being found guilty except for insanity of numerous crimes.

In February, Benton County was cited for five serious safety violations and fined $30,500 by the state Occupational Safety and Health Division in the death of a county road maintenance employee.

Pete Neuman, 59, was working on a county road project in the Coast Range foothills south of Corvallis on Aug. 9, 2019, when the rented piece of logging equipment he was operating rolled 300 yards down a steep hillside and flipped over, causing his death.

An internal investigation and an investigation by the Benton County Sherriff’s Office found that the skidder Neuman was running at the time of his death belonged to Charlie Stouder, the son of road crew supervisor Jim Stouder, and that the elder Stouder had arranged to rent the machine for the county’s use.

Oregon OSHA determined that the skidder’s brakes were inadequate and that the county failed to ensure it was properly inspected and that employees were properly trained to operate the machine.

In May, Neuman’s widow filed an $8 million wrongful death lawsuit against the county, the Stouders and several other defendants claiming negligence. The county has since been dismissed from the case.

On April 28, the Sweet Home Police Department, assisted by several other agencies, investigated a fire at a trailer in the Tamarack Ridge Estates mobile home park, where two adults and two children were found dead.

The single-wide trailer was heavily damaged in what officials later ruled a murder-suicide.

Authorities determined that Tiffany Shobert, 41, and her children, Johnathon, 15, and Charlotte, 2, had died of blunt force trauma before the trailer burned. Gasoline was used to start the fire, officials said.

Officials said John Shobert, 63, died of a single gunshot wound, and is believed to have killed himself.

Than Duy Kim was sentenced to 17½ years in prison in January for killing Mitch Xuan Dong at a Corvallis nail salon owned by Kim and his ex-wife, Anh Tram Gia Phan.

Kim, an Albany resident, bludgeoned Dong with a baseball bat and cut his face with knives on Dec. 5, 2017, because Dong was having an affair with Phan.

In September, Jim Dandee Morris pleaded guilty to first-degree manslaughter and other crimes and Julie Thurman pleaded no contest to second-degree manslaughter and other counts for a 2018 shooting in Blodgett that left a man dead and a woman badly injured. He was sentenced to 20 years in prison, and she was sentenced to eight years. The man who was killed in the property dispute was Wesley Newell, 68.

In July, two children were critically injured by an unmanned watercraft at Sweet Home’s Lewis Creek Park. Kennedy Swanson and Zachary Maynard, both 6, were struck when Salem resident Antonio Cassanova-Gonzalez was thrown from his jet ski and it continued on towards the beach.

Kennedy suffered a broken clavicle, broken jaw and lacerations to her liver. Zachary died from his head wounds three days later. The death was ruled accidental, and no charges were filed.

Wesley Newell, 68, was killed in a shooting near Blodgett in 2018. The article has been updated to eliminate an error made in the section on "Murder charges, manslaughter pleas."

Watch Now: Seniors struggle to get the vaccine

Watch Now: Seniors struggle to get the vaccine

It’s been an extraordinary year in the mid-Willamette Valley, as we’ve dealt with everything from a relentless pandemic to devastating wildfir…

Editorial: Remembering those we lost in 2020

It’s never easy to say goodbye to a loved one, but the novel coronavirus pandemic has made our rites and rituals far more complex for most of 2020.

After a steady trickle of lower daily case counts, the new confirmed and presumptive cases of COVID-19 have returned to numbers above 1,000.

Oregon reached another grim milestone during the novel coronavirus pandemic on Sunday, when the state reported its 1,500th COVID-19 death.

An Albany man has been indicted in Linn County Circuit Court with sex crimes against a girl younger than 12.

The six new deaths attributed to COVID-19 and reported Monday by the Oregon Health Authority included that of a 92-year-old Linn County woman.

In this edition of the "cops logs," we have domestic assaults, charges stemming from police pursuits and more.

In this edition of the "cops logs," we have an animal abuse plea scheduled in a Corvallis Police Department case, a domestic violence case from Linn County and more...

We have a domestic assault case in Benton County court, a stolen bicycle near Corvallis, a police pursuit in Albany, and... a Linn County deputy wrangling a wandering goat.

An Independence man was charged in Linn County Circuit Court on Friday with child pornography-related crimes.

Here's a look at some of the top-performing stories on our websites in January. We have crime, housing issues, a police pup's surgery, donuts …

Tiffany Lazon's daughter Felicity Halberg, mother Zodelle Sales and brother Patick Tsutsui pray with friends and family while remembering the life of the missing Albany woman at the Owen Rose Garden in Eugene in February.

Traffic heads past the concrete island and memorials to Rhiana Daniel on Highway 99W in South Corvallis in this January photo.

During an event in June, Jim Simonis talks to Sweet Home public safety workers who responded to a crash that killed two of his children.

William Henry "Hank" Dufort is shown on the Children's Farm Home campus while he was director of the Benton County facility.

Investigators from Linn County's multiagency investigation team inspect the scene of a fire in Sweet Home where four bodies were discovered.