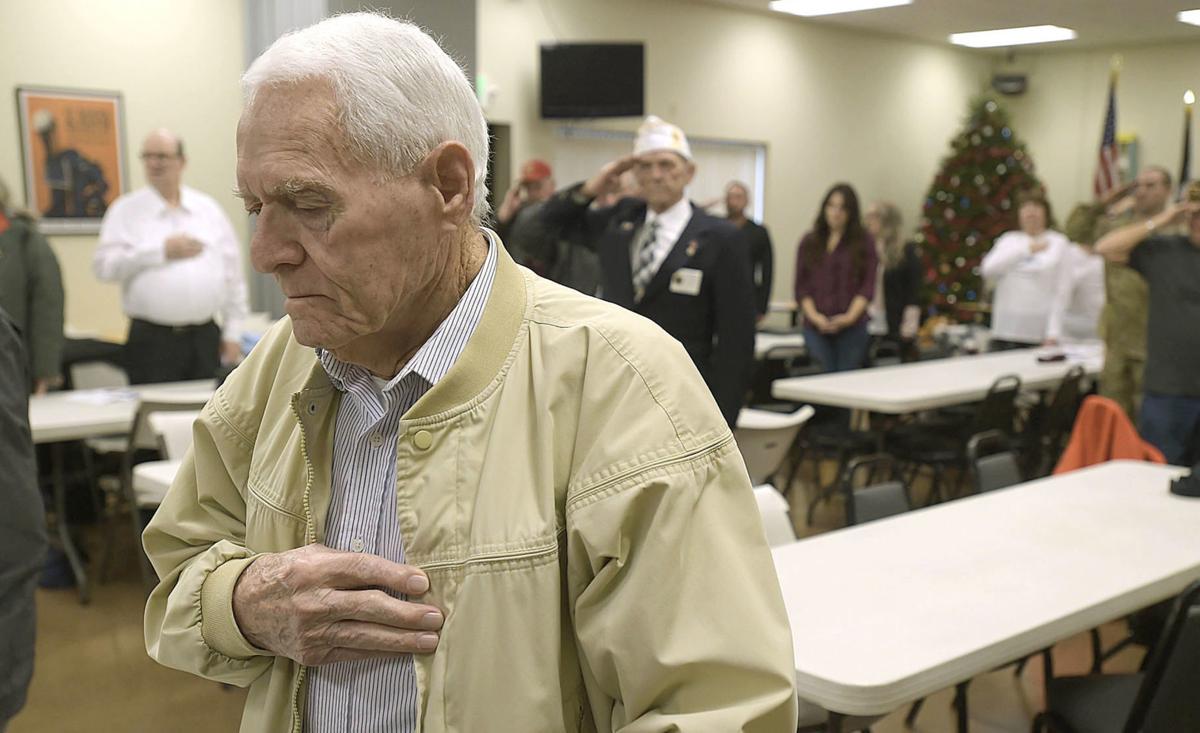 December 7, 2018: Pearl Harbor survivor David Russell stands for "Taps" during a memorial service at the American Legion Post 10 in Albany during last year's observance. Russell survived the attack by jumping from the stricken USS Oklahoma onto the USS Maryland. See a photo gallery and other associated elements online. 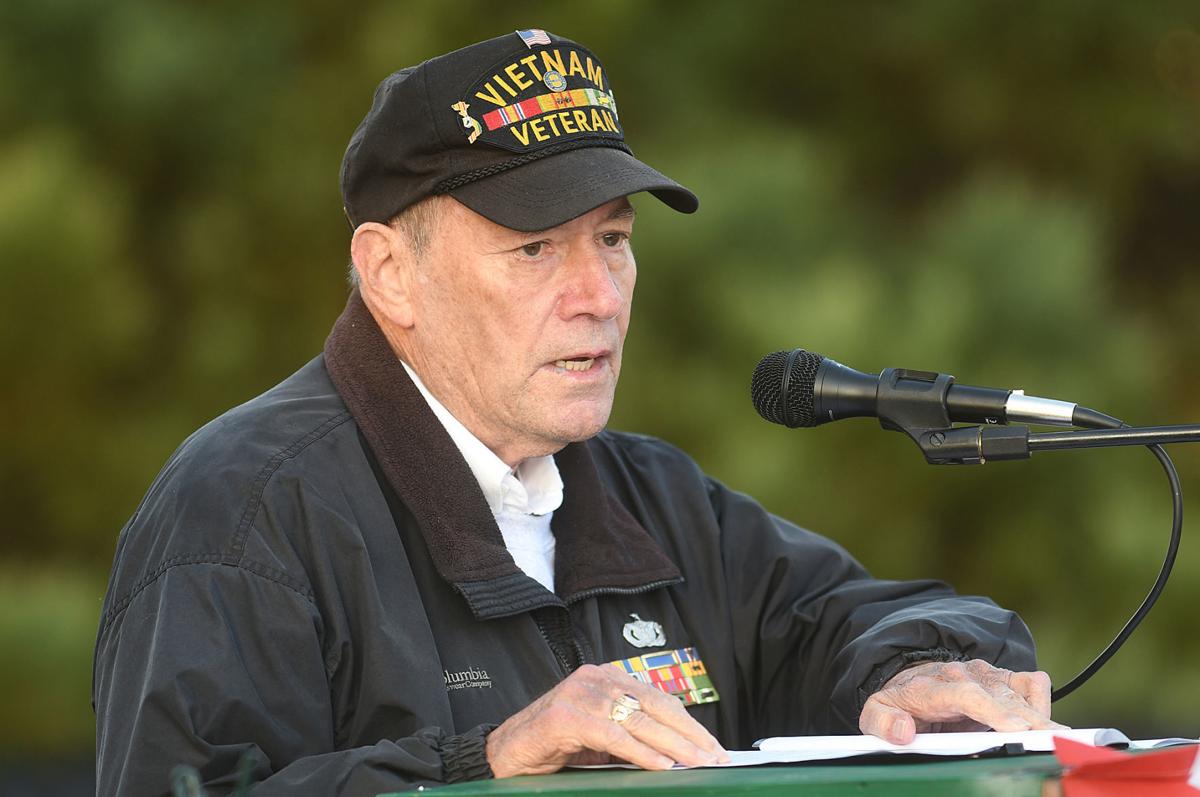 Jim Willis conducts the call to order during the 2019 Veterans Day Memorial Service. 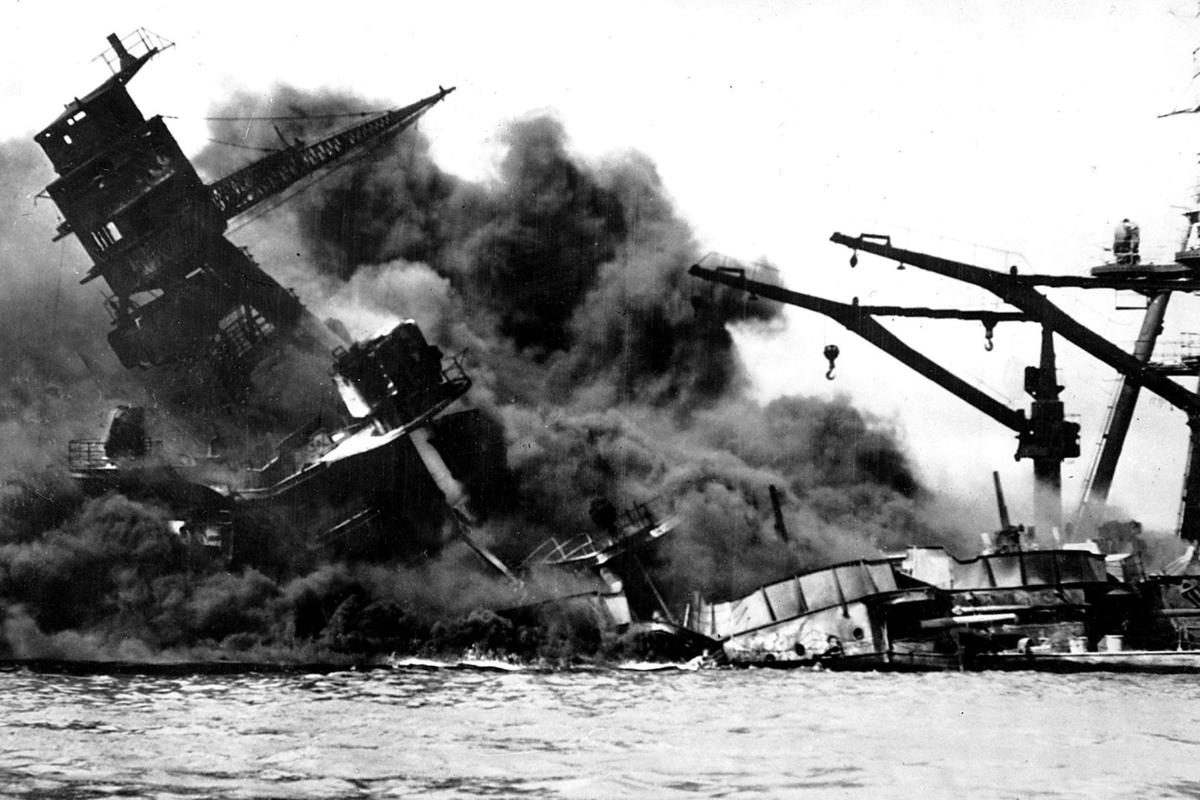 The battleship USS Arizona belches smoke as it topples over into the sea during a Japanese surprise attack on Pearl Harbor, Hawaii, in this Dec. 7, 1941 file photo. 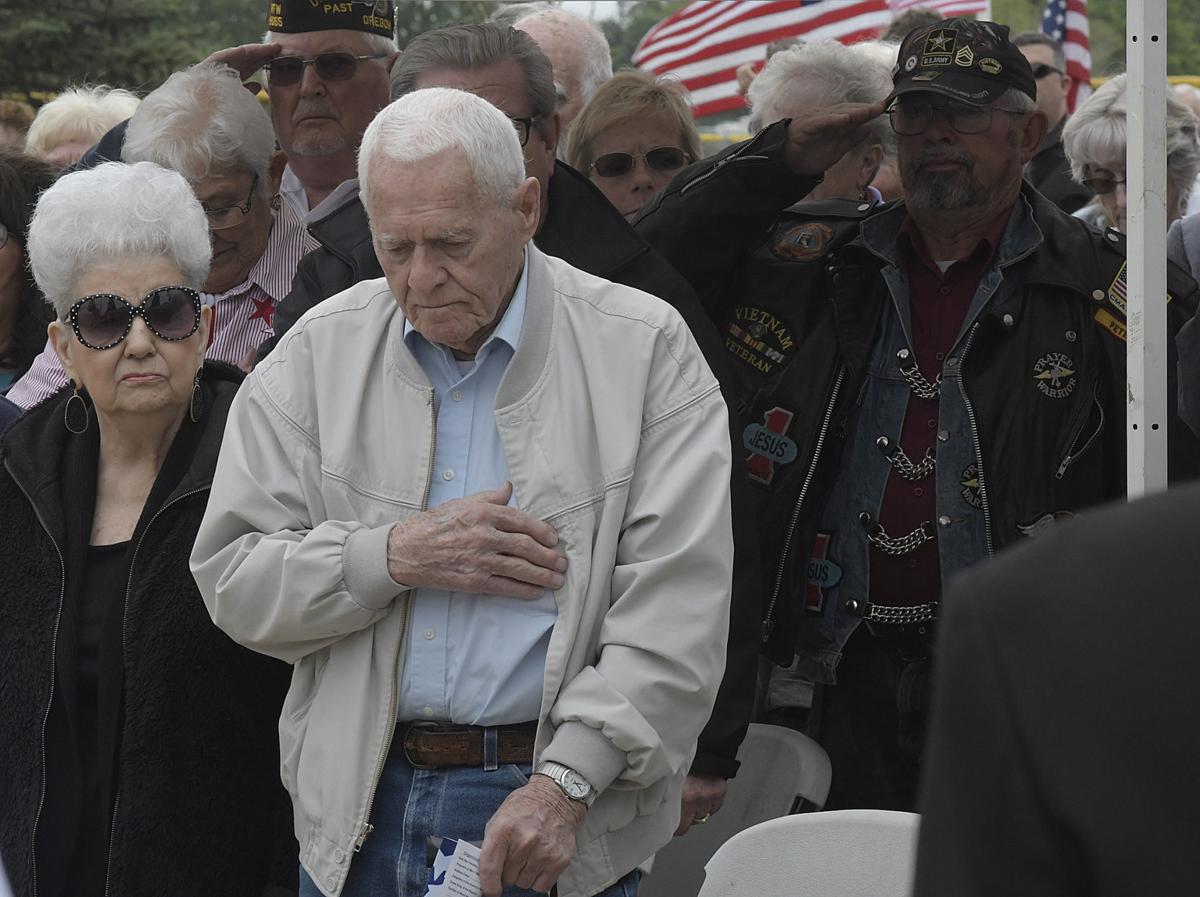 On Dec. 7, 2008, seven red chairs lined the rain-soaked concrete in front of the Linn County Courthouse.

Each one was occupied by a veteran who had been on Oahu on the same day 67 years earlier, when Japanese planes flew over Pearl Harbor, dropping destruction onto the port and launching America into World War II.

The seven men sat in the rain, their white hair covered with caps, military patches stitched into the fabric. They listened to the invocation and the national anthem. Nodded along as Master of Ceremonies Jim Willis recognized their service, and then lowered their heads for the closing prayer.

Eleven years later, there aren’t any chairs in front of the courthouse.

Albany will mark Pearl Harbor Day at the American Legion on Saturday with a memorial beginning at 8 a.m. The Color Guard will present the flag. There'll be an invocation and they may play the national anthem. But only one person will place a hand over a heart that raced in terror and duty on Dec. 7, 1941.

David Russell is the last known Pearl Harbor survivor in the mid-valley, and he represents a group of men and women who witnessed history firsthand, their memories of the day serving as our best connection to the beginning of America’s involvement in WWII.

In April of this year, Spokane, Wash., lost its last Pearl Harbor survivor, Bill Garland, 96, according to reports. The following month, Alabama lost its last Pearl Harbor veteran, Thomas Davis, 99. Two of the last five survivors of the USS Arizona — Lonnie Cook and Lauren Bruner, both 98 — passed away in July and September of this year. In November, Massachusetts lost George Hursey, and on Nov. 21 of last year, the oldest living Pearl Harbor survivor, Ray Chavez, passed away in California at the age of 106.

“Think about it,” said Jim Willis, the former Director of Veteran’s Affairs for the state of Oregon. “Even if they were a 17-year-old sailor in 1941, they’re very old now. They’re taking with them the history of what happened on that day.”

David Solomon is the commander for Albany's American Legion Post 10 and has headed the city's Pearl Harbor event for the last few years.

“It’s now more than 75 years later and most of the witnesses are no longer with us,” Solomon said. “We have Dave Russell.”

Russell is 99 years old now, and for years he's relayed his Pearl Harbor experience for news outlets throughout Oregon, including the Albany Democrat-Herald. During an interview with the latter in 2016, he recalled the date which has lived in infamy.

Just before the first planes roared toward the harbor, Russell was reading. He had enlisted to escape Depression-era poverty in the Midwest and had been onboard the USS Oklahoma for 18 months by December 1941.

When the attack started, he scrambled toward the deck. And as the ship started to turn, he took a leap of faith, jumping six feet to the nearby USS Maryland.

“I jumped and caught my right foot on a piece of metal that was overlapping,” he said. “But I made it to the Maryland by catching a rope. … I didn’t see the Arizona blow up, but I did see the destroyer Shaw blow. Guns were going off everywhere and it was very loud.”

Russell spent the remainder of the 110-minute attack helping to load the Maryland’s anti-aircraft guns and the rest of the war aboard the USS Mahan, a destroyer that saw several battles before being sunk by a kamikaze attack.

“To hear him (Russell) talk about what happened that day is something everyone should witness,” Solomon said. “We will never forget the words of Dave Russell.”

But words become memories and eventually, memories fade. So how will the eventual loss of all Pearl Harbor survivors affect our collective memory?

“Now, everything we know, unless they made recordings, firsthand accounts will be impossible,” Willis said. “Because soon, there won’t be anyone left.”

Pearl Harbor vet's interment to be last on sunken Arizona, page A7

The following dispatches comprised the front page of the Albany Democrat-Herald, printed Sunday, Dec. 7, 1941, when Albany did not otherwise p…

Gallery: A look at past Pearl Harbor Rememberances

It’s been 75 years, but for David Russell, the memories of the more than 400 fellow sailors — many of them close friends — who died on Dec. 7,…

National Pearl Harbor Remembrance Day was Saturday, and this year our thoughts turned to all of the men and women who served during World War II.

December 7, 2018: Pearl Harbor survivor David Russell stands for "Taps" during a memorial service at the American Legion Post 10 in Albany during last year's observance. Russell survived the attack by jumping from the stricken USS Oklahoma onto the USS Maryland. See a photo gallery and other associated elements online.

Jim Willis conducts the call to order during the 2019 Veterans Day Memorial Service.

The battleship USS Arizona belches smoke as it topples over into the sea during a Japanese surprise attack on Pearl Harbor, Hawaii, in this Dec. 7, 1941 file photo.