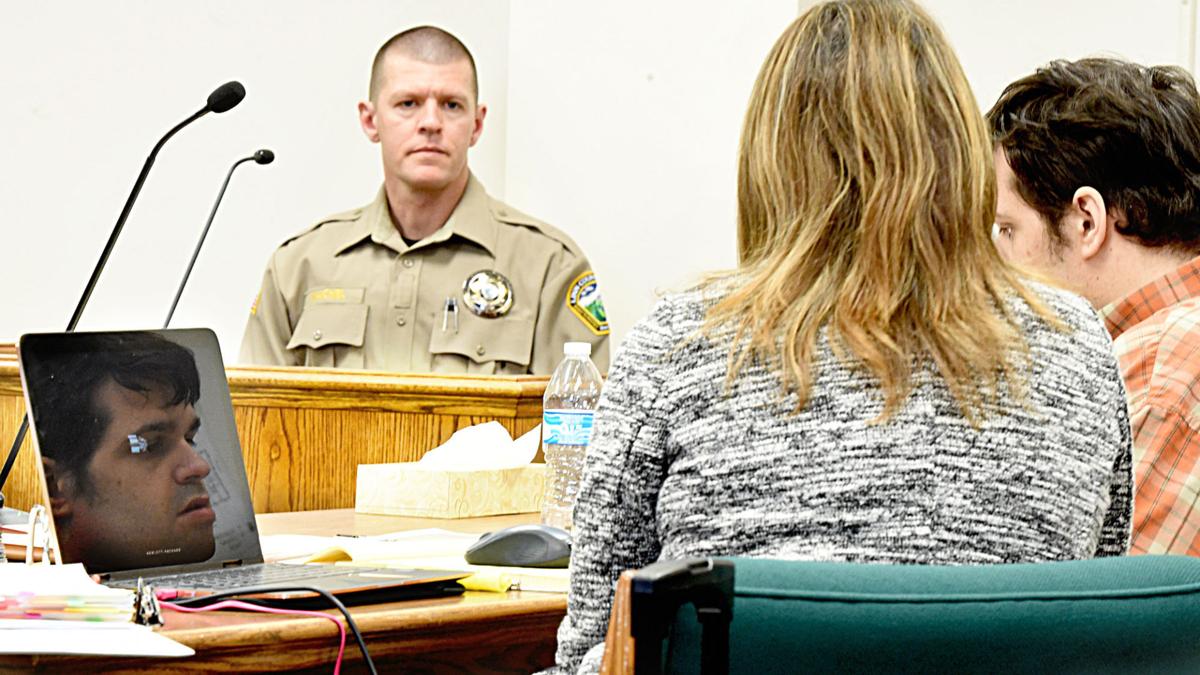 Linn County Sheriff Deputy Charles Katchel is cross-examined by attorney Elizabeth Baker over a letter he was given by murder defendant Devin Hansen. 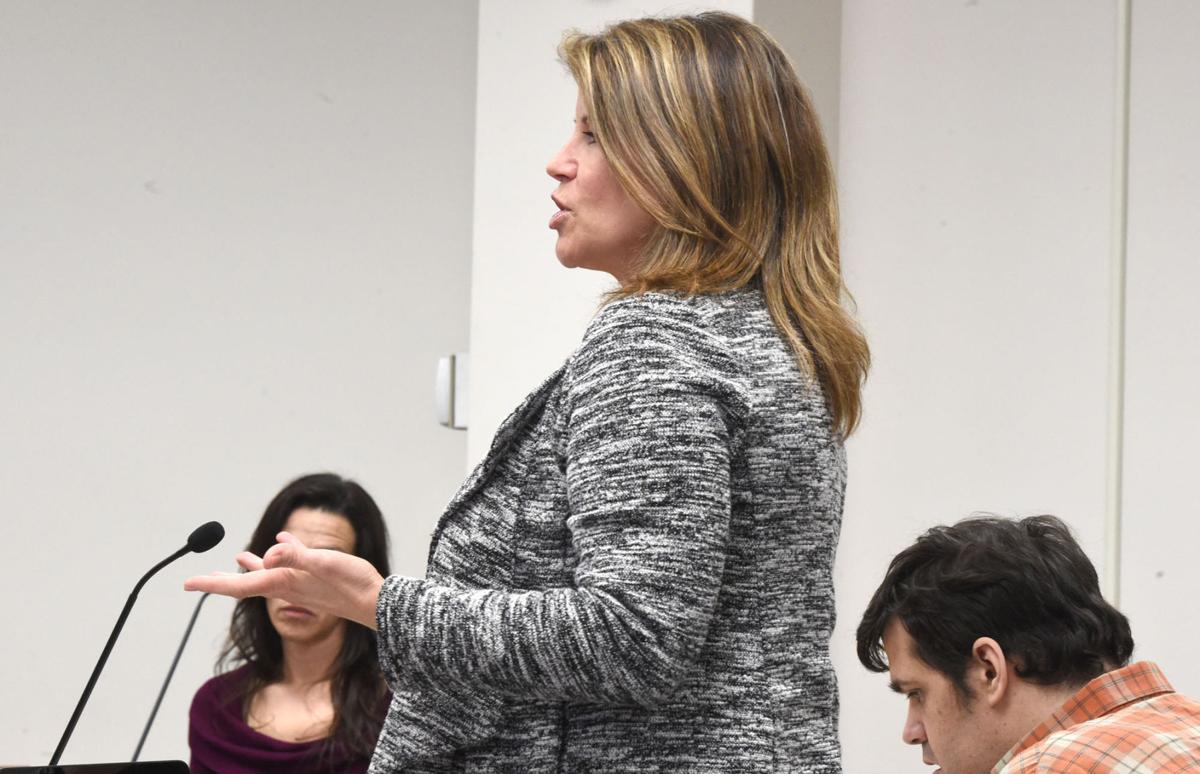 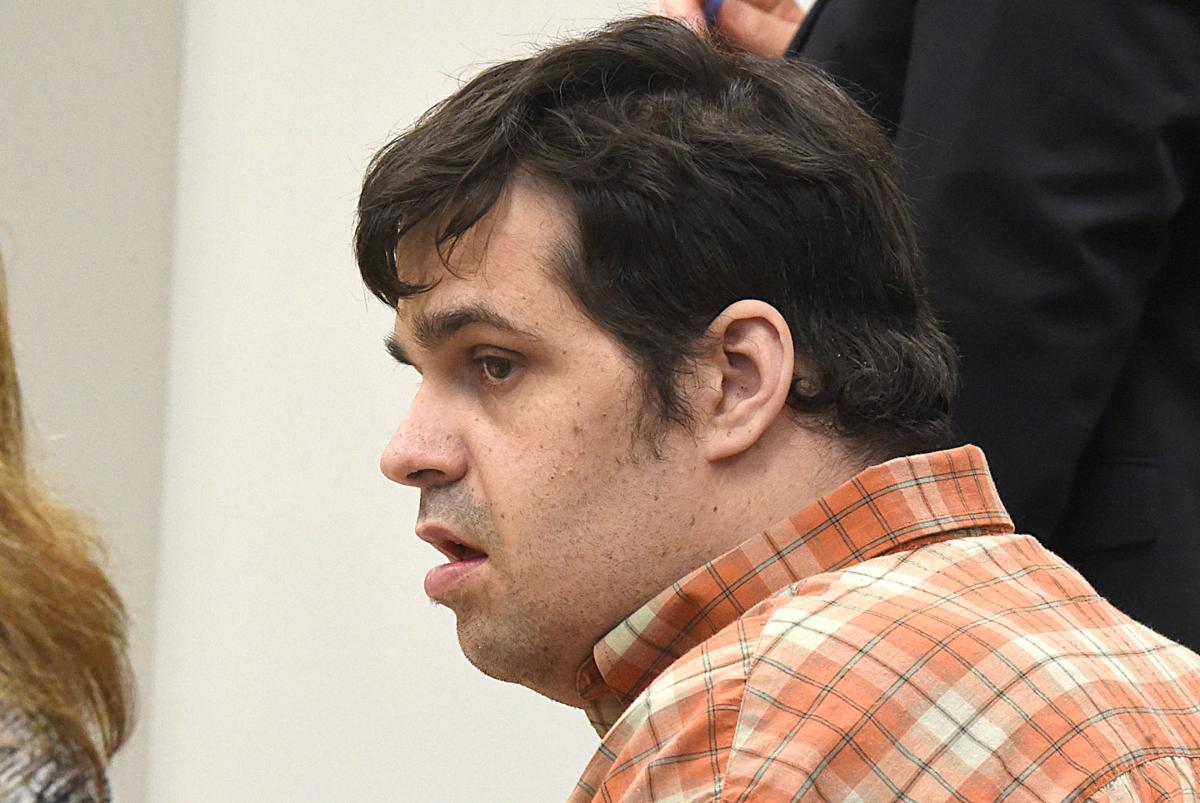 Defendant Devin Hansen listens to a prosecution question during the second day of his trial. 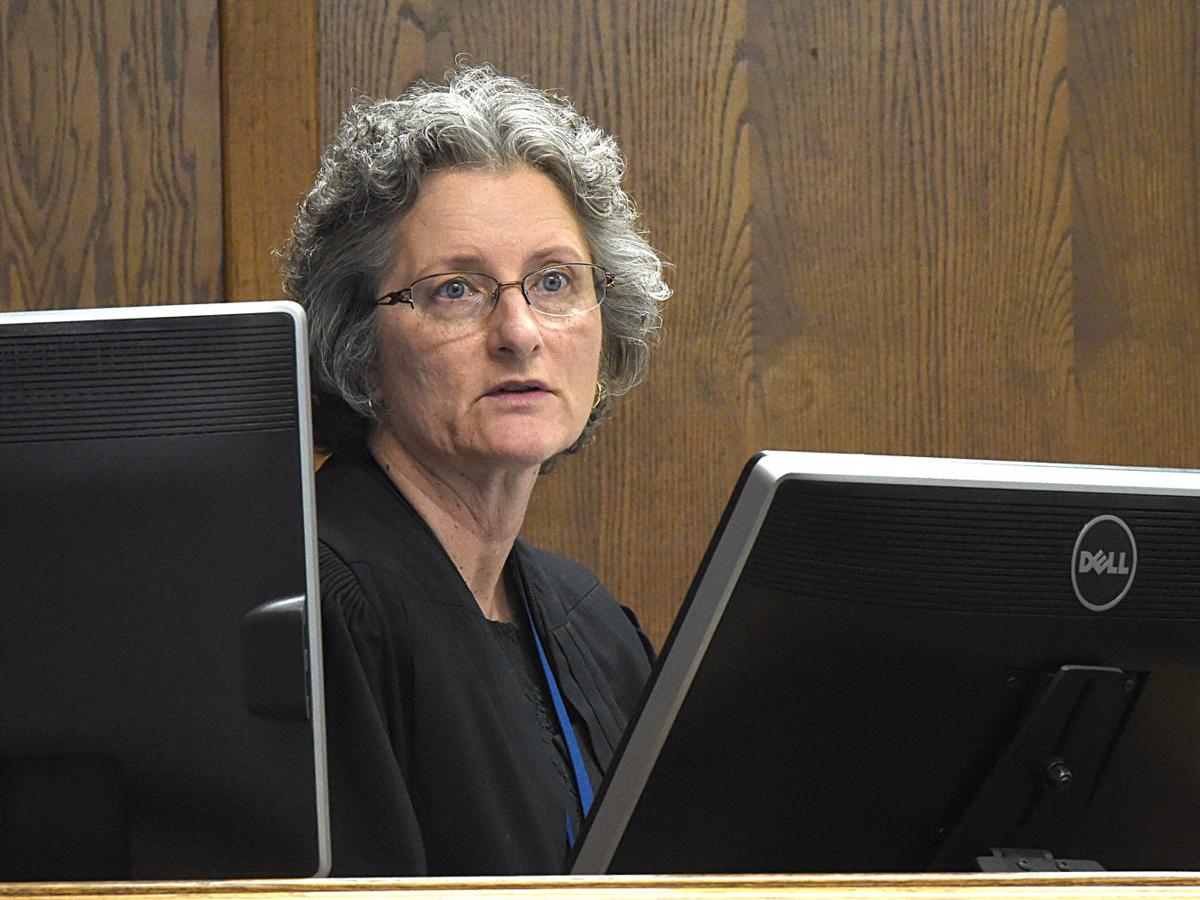 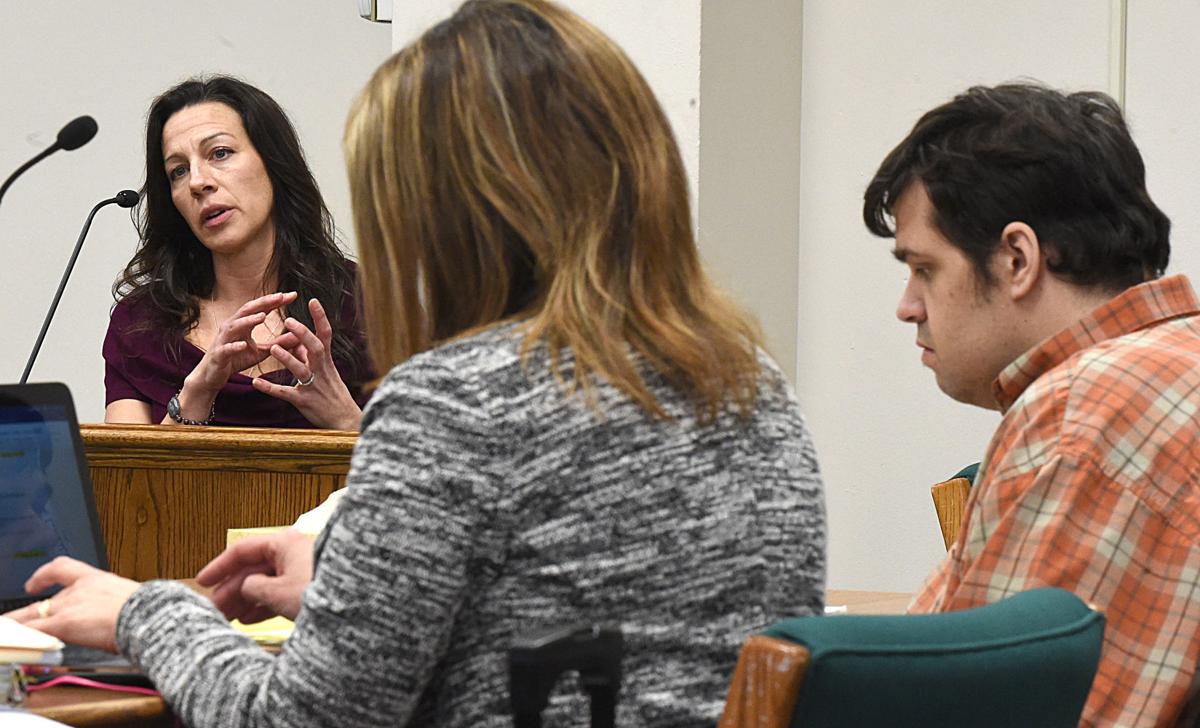 The prosecution introduced more witnesses Tuesday in the Devin Hansen murder trial, presenting testimony from medical examiners and law enforcement officials that paints a picture of violent struggle and methamphetamine use.

Hansen was arrested Jan. 25, 2014, for murder, second-degree assault, fourth-degree assault, strangulation, menacing and reckless endangerment in the death of his girlfriend, Christine Smith.

Hansen and Smith allegedly got into an argument and struggle that resulted in Smith’s death. Hansen, who weighed close to 400 pounds at the time, allegedly pinned Smith, who weighed 250 pounds, down on the couch and held his arms across her throat and head until she stopped breathing. He then called 911 and tried to revive her. She was pronounced dead two days later.

While the prosecution seeks to prove Hansen intentionally strangled Smith that night, the defense wants to show the death was the unfortunate result of a confrontation with an erratic and abusive girlfriend.

Among the witnesses, Linn County Assistant District Attorney Jonathon Crow called Albany Police Lieutenant Travis Giboney, one of two detectives who responded on the night of the incident. Giboney said he seized blood evidence from the wall and helped examine the sofa where the crime took place. The sofa, he said, had a broken wooden leg and a damaged center brace, which he said was noteworthy because the breaks appeared fresh, meaning the damage likely happened that night.

Defense attorney Elizabeth Baker took issue with Giboney’s characterization of the couch damage, and called into question his assertion that there was blood on the wall, citing the fact the samples were not sent to a lab for analysis.

“So you have no idea that it’s blood?” she asked him. Giboney replied that his training and experience told him what he observed on the wall was blood.

Baker also questioned Giboney on the condition of the crime scene, which he described as a mess. What stood out, said Giboney, was that the rest of the apartment was messy and unorganized, while in the master bedroom, all of Hansen’s clothing was neatly hung up in the closet.

Baker also asked Giboney if he had asked the neighbors whether they’d heard any kind of a noise that would be consistent with a struggle, or with the couch breaking as a result.

“Some people said they’d heard noises and others didn’t,” he answered.

Albany police detective Ryan Corbett also testified that he seized syringes and just under 10 grams of methamphetamine from a woman’s purse he found in the closet. Crow later offered blood and urine samples from both Hansen and Smith as evidence.

Crow also called two medical examiners as witnesses, both giving descriptions of strangulation and suffocation injuries. Jennifer Schindell, a registered nurse, has also worked as a chief medical examiner for Linn and Benton counties. As a specialist on strangulation and suffocation injuries, she described in detail the anatomy of the neck and throat, and explaining what happens during strangulation. When Crow asked her to describe the types of physical indicators that could result from strangulation, baker objected seven times, arguing such information is not relevant to the case, and called Schindell’s qualifications into question.

While Judge DeAnn Novotny over ruled most of the objections, Crow accepted others, and reworded his question.

Schindell agreed she was not a medical doctor, but said she was in agreement with the forensic pathologist, who gave the cause of death as cerebral anoxia due to compression, meaning the brain was deprived of oxygen, and decided the manner of death was homicide. Baker called into the question the suggested manner of death, saying Schindell was simply repeating the information from the police report when she presented her report to the forensic pathologist.

“Are you speaking to police officers? Because you have a lot of detailed quotations,” Baker began. “So with the lengthy interviews that Mr. Hansen provided, I’m asking if you read transcripts of the things that Mr. Hansen said. Because He indicated very specifically he leaned on Ms. Smith.”

Schindell said she could not say whether he said he leaned on her.

“So isn’t it a guess other than the cause is cerebral anoxia?” baker asked.

“I would leave that up to the forensic pathologist,” replied Schindell.

The trial is expected to continue through the week, with the defense planning to introduce at least 15 more witnesses.

Community members gathered at the Cumberland Church Sunday morning in the crisp, cold air to watch the historic building move to its new location.

The Linn County Board of Commissioners on Monday, Oct. 18 voted to declare a state of emergency over concerns the statewide vaccine mandate fo…

The state of Virginia is seeking to extradite an Oregon State University faculty member for alleged sex crimes said to have occurred there.

Monday was the deadline for all school employees to be fully vaccinated or granted a religious or medical exemption, per Gov. Kate Brown’s vac…

Linn County Sheriff Deputy Charles Katchel is cross-examined by attorney Elizabeth Baker over a letter he was given by murder defendant Devin Hansen.

Defendant Devin Hansen listens to a prosecution question during the second day of his trial.