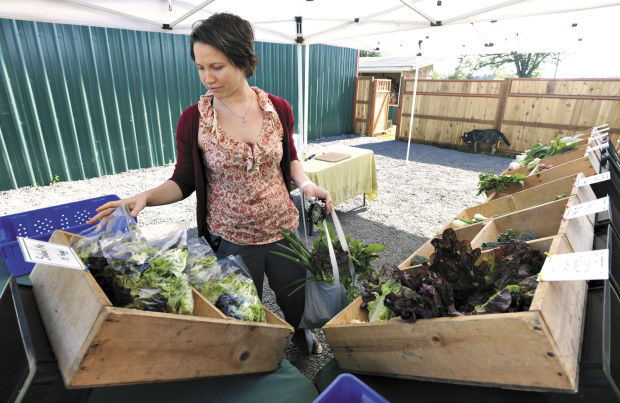 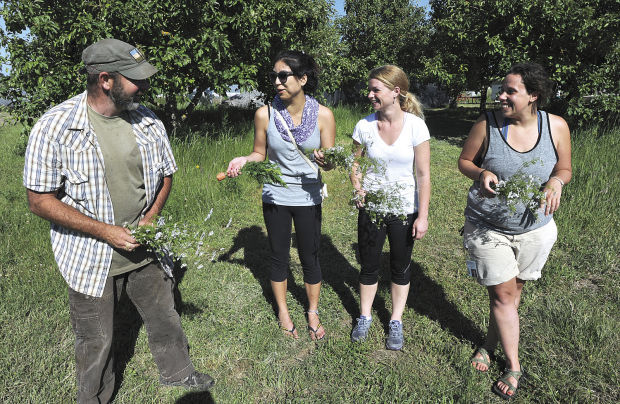 LEBANON — Married couple Jeff Bramlett and Carri Heisler quit the rat race to become farmers recently, but you can’t find their fruits and vegetables at any grocery store or Saturday market.

The duo’s farm, Pitchfork & Crow, off Highway 20 near KGAL Road, operates exclusively by providing produce directly to more than 75 families every week.

And those members pay up front at the start of the season for their fresh peas, lettuce, potatoes and more.

The couple said the sales strategy has paid off, making them more efficient and providing a stable source of income at their farm.

The marketing method, called community supported agriculture (CSA), or subscription farming, has existed for decades and grown in popularity nationwide as interest in local food has increased.

And in Oregon, CSA is especially popular.

The state ranked 10th in the nation for subscription farming in the USDA’s 2012 Census of Agriculture, results of which were released this spring.

Bruce Pokarney, Oregon Department of Agriculture spokesman, said the states ranked ahead of Oregon for CSAs generally have larger populations and more farms than Oregon.

“There are lots of these in Linn and Benton counties,” said Melissa Fery, OSU Extension Service small farms program faculty.

Typically, CSAs provide members with a weekly box of food, and items inside the box change as the growing season progresses.

“It’s a way for them to sell their produce but maybe not do all the retail work, which takes a lot of time and effort,” Fery said.

Many of the farms that have a CSA program also sell at markets and to stores, restaurants and other businesses, Fery said.

According to the Oregon Department of Agriculture, CSAs are particularly popular in urban areas.

“It’s a great fit for that urban fringe, because CSAs are kind of on the smaller side of farms in terms of acreage,” said Laura Masterson, a Board of Agriculture member who owns a farm in southeast Portland.

“It’s a way to get a high gross per-acre return, and your market is right there,” she added.

Bramlett and his wife’s farm is about 15 acres just north of Lebanon.

He said they switched to operating solely by CSA this spring in part because going to farmers markets was so time consuming.

“It’s really tiring. It takes all of Friday to prepare for the Saturday market. And then you have to wake up at 4 a.m. and stand there all day,” he said.

Being efficient with hours is paramount for Pitchfork & Crow, since the farm’s work force currently consists of just Bramlett and Heisler.

Another local farmer trying a form of community supported agriculture is Tory Fitchett, who owns an acre of blueberry bushes off Bryant Way just west of Albany.

Last year, Fitchett’s parents sold him and his wife the property, which has had blueberries on it since at least the 1930s and operated as a U-pick farm for decades.

Fitchett decided to switch to selling a limited number of memberships to his farm, Terra Fluvia, to friends and friends of friends.

The arrangement means that members can pick and eat berries to their hearts’ content, and Fitchett, who has a full-time job at Sky High Brewing, won’t need to watch over strangers coming to his land.

He recalled a childhood incident when someone stole his parents’ cash jar at the U-pick farm and sped off.

Fitchett wasn’t sure how many memberships he’d sell for $65 for a family of three or less or $100 for groups of four or more.

But he believes he’ll be able to earn enough money to cover operating costs and qualify for a farm deferral on property taxes.

Fery said Fitchett’s decision makes sense for a berry farm as having strangers at a U-pick operation can be a “huge” liability issue.

And, like, other farms, getting paid up front provides financial stability, she said.

“This takes some of the risk out of small-scale farming,” Fery said.

Hannah McGuire, CSA coordinator for Gathering Together Farm near Philomath, said that subscription payments serve as a sort of start-up income to buy supplies and cover other expenses.

“I get this going in the beginning of the year, when we don’t have income coming from other sources, which is helpful,” McGuire said.

Gathering Together Farm has been doing a CSA program for about two decades and has nearly 360 members, along with an ample waiting list.

“I have a notebook page full of names,” McGuire said.

A CSA approach has other advantages as well: Bramlett, at Pitchfork & Crow, said a benefit is that he doesn’t have to worry about not selling produce at market anymore.

Heisler said she was worried about making the switch to operating solely by CSA, since many people in the mid-Willamette Valley have their own gardens.

“I wasn’t sure how people would take to the concept, but they seem really excited about it,” Heisler said.

So much so that Bramlett said Pitchfork & Crow’s membership list is essentially full.

“We would like to be able to do more,” he said. “But we are hitting our limit with the amount we can grow and harvest,” he said.

The Lebanon school is looking at establishing a relationship with a CSA for its students, Merwin said.

“It’s an equal drive to here or Safeway, so you might as well come out here,” Merwin said.

“I know where the foods coming from,” Merwin added. “Nutrition is a big part of our health.”

A Sweet Home man was killed in a crash west of Lebanon on Sunday night, according to a news release from the Oregon State Police.

An excavator stuck on the Ellsworth Street Bridge snarled traffic for more than an hour Tuesday morning, delaying commuters' drive into Albany.

The Albany Police Department is investigating a shooting that resulted in the death of a local man at Timber Linn Memorial Park late Sunday night.

A Lebanon man filed an $850,000 lawsuit alleging a crash he was injured by was caused in part by a negligent police officer who did not arrest…

Oregon is relaxing requirements to become a substitute schoolteacher in the face of a widespread shortage currently stretching educators thin.

OSU researcher, fugitive from Virginia, suspected of sex crimes there

An Oregon State University faculty researcher has been arrested on suspicion of sex crimes allegedly committed in Virginia.