Reports: 6 or more killed in shooting at Molson Coors in Milwaukee

Story Next Door: Alex Johnson II meets people where they are
Share this
{{featured_button_text}}
1 of 3 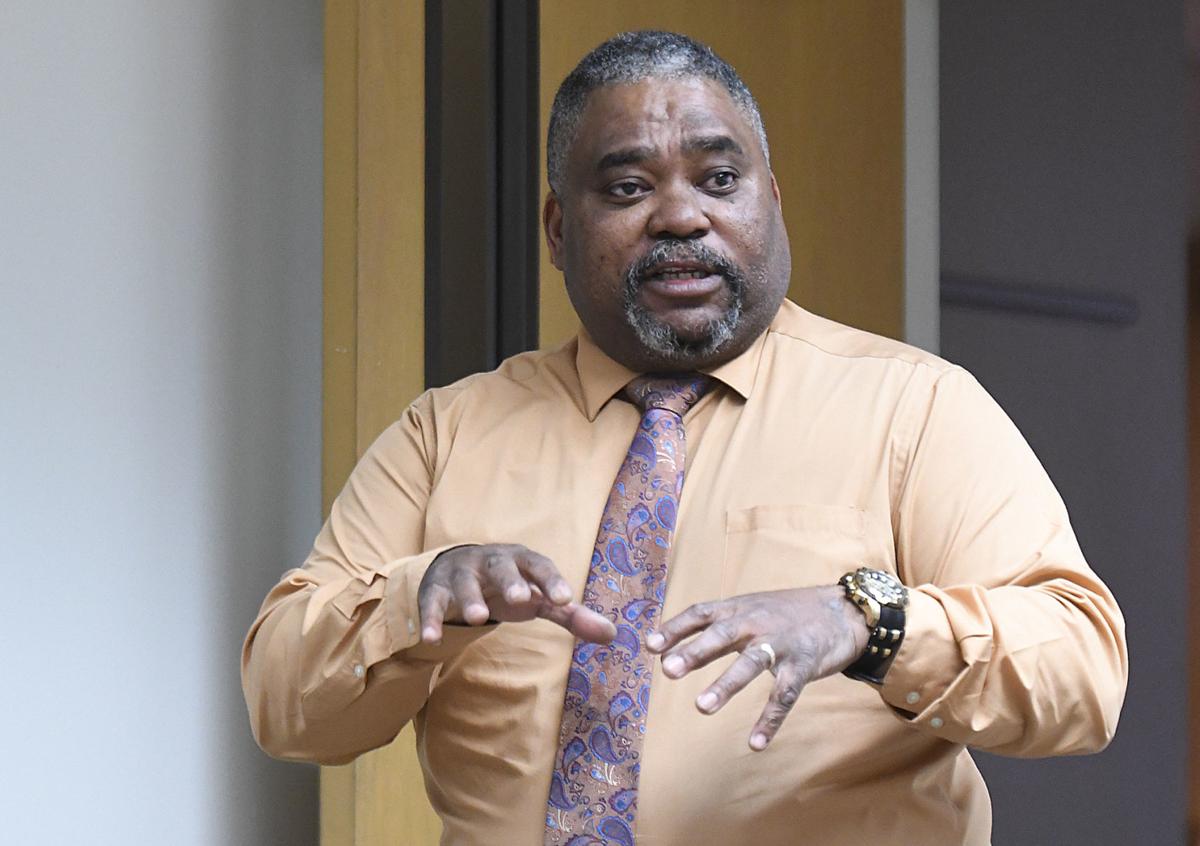 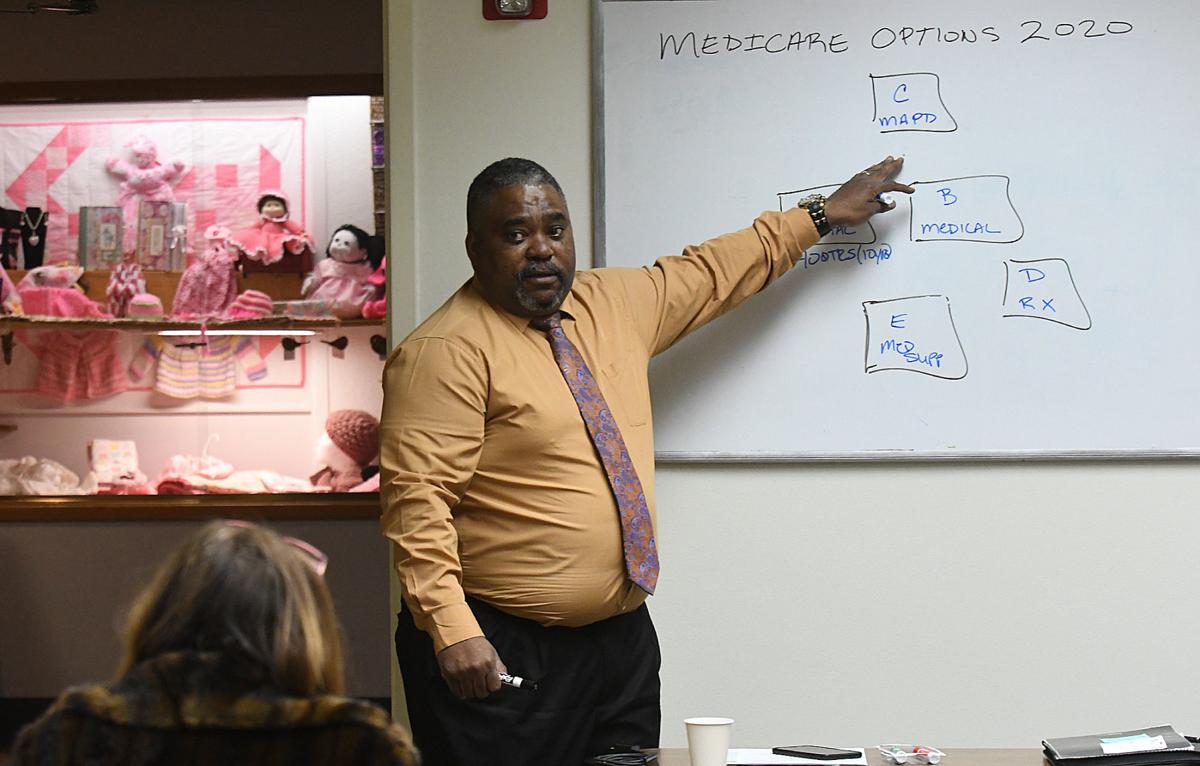 Alex Johnson II discusses the five options available with Medicaid during a seminar Tuesday at the Albany Senior Center.

At 1:30 p.m. on a Wednesday afternoon, he’s camped out at a table in the back of Allan Brothers Coffee behind his laptop, Bluetooth on, pen running across the page. He’s been going since 5 a.m.

Johnson is the first to admit his appearance can be a bit intimidating. He’s a big guy. He’s a Navy veteran. He’s black. And that shouldn’t matter, but in Albany — despite best efforts — for some it still does, and it shapes some of his decisions and too many of his interactions.

Before becoming a city councilor, he was (and still is) a business owner, selling insurance coverage around the state. He’s amassed an army of loyal customers who often refer him to friends. One referral led him to knock on a woman’s door.

“She opened the door and I said, 'Hello, I’m Alex Johnson II and we have an appointment to talk about Medicare,’” he said. “She looked at me through the screen door and said, ‘I’m sorry. I don’t do business with n*****s.’”

At this point in the story, he pauses to chuckle, lean forward and recall his response.

The story, every time it’s told, provokes the same reaction from Johnson. He laughs. Not because it’s funny but because it’s absurdly real.

Eventually the woman’s friend made a phone call and an apology was forthcoming — she would do business with Johnson. But he had a caveat: Research other insurance companies, and if his rate was the best, he’d shake hands.

“She became my client,” he said, the last of his laugh fading away. Johnson does this often: laughs in the face of the absurdity tied to the minutiae and stubborn nature of government, the unreasonableness of racism and the state we often find ourselves in today. He laughs. In a way that makes you feel like he’s in on the joke — he’s not really part of the establishments he’s infiltrated.

Big governments in small towns that think nothing before reaching into their neighbors’ pockets to fund more and more and provide less and less? Johnson will hold up votes and send policies to the mat because they would mean taking one more dollar from his elderly clients that they can’t afford, or because they'd do away with the only safe, sanitary place women experiencing homelessness have to solve a problem bestowed upon them by nature and biology.

Insurance companies that sell plans to seniors that cost more than they’ll ever cover? Johnson doesn’t play that. He’ll sit at any table in any kitchen and find the rate that makes the most sense, even if it means less money lines his own pocket.

He’ll meet people where they are.

Empower them and send them on their way.

Ironically, it’s how he was tricked into running for the Albany City Council.

Ray Kopczynski had been a councilor for years. He was active in the community and on local advisory groups. He also happened to be Johnson’s neighbor.

“It was when the marijuana stuff was going on,” Johnson said. “He asked me to read through some things and tell him what I thought.”

Johnson ended up attending the council meeting. He wasn’t impressed with some of the seated councilors and told Kopczynski he thought new blood was in order. That’s when Kopczynski told him he wouldn’t be running for his seat again.

But who, Johnson asked, was going to replace him?

Empowered with information, Johnson went on his way — right to the dais, as councilor for Ward 2. In his first year, his vote has swung from one side to the other depending on the issue and how it would affect his constituents.

The biggest issues to come before the council in his first year have been the matter of allowing accessory dwelling units in Albany and whether or not a local church was allowed to provide a portable toilet on its own property.

For Johnson, it came down to people.

“I went to 19 funerals last year of people who died alone in a small room when they could have been at home with their family,” he told the council in January as it argued over possible traffic jams caused by the increased number of living spaces. “It's asinine to me to hear arguments about traffic when that's someone's grandparent."

He’s voted to override Mayor Sharon Konopa's veto on the issue twice since taking office. And, during the last year, he said over and over and over again that the city had no business prohibiting the church from having a portable toilet on its own property without a permit when the city itself had portable toilets in various locations — also without permits.

Because for Johnson, it’s about what’s right.

That's a value he grew up with, one that was reinforced during his years in the U.S. Navy.

“I turned 18 in boot camp,” he said, noting that he joined because, as a young man from a rural California town, he wanted to see something.

And the things he’s seen in his first year as councilor have confirmed for him that there’s still work to do. At the African-American Youth Leadership Conference in April, he came away with a list of concerns from students. His email account is usually full, as are his social media message folders, and his "coffee with the councilor" events draw a crowd as well.

“You have to listen,” he said. “People will tell you.”

If you want to know about snake sex, Bob Mason is the man to ask. Just don’t ask him to help you get a date.

It's not so much a hobby as it is a sport.

In a packed city council chamber with officers from Corvallis, Tigard and Albany — as well as from Seattle, King County and Port Orchard, Wash…

GAPS to roll out Native curriculum in the fall

In 2017, the Oregon Legislature passed Senate Bill 13, requiring school districts to include Native curriculum in K-12 classes and provide pro…

Alex Johnson II discusses the five options available with Medicaid during a seminar Tuesday at the Albany Senior Center.