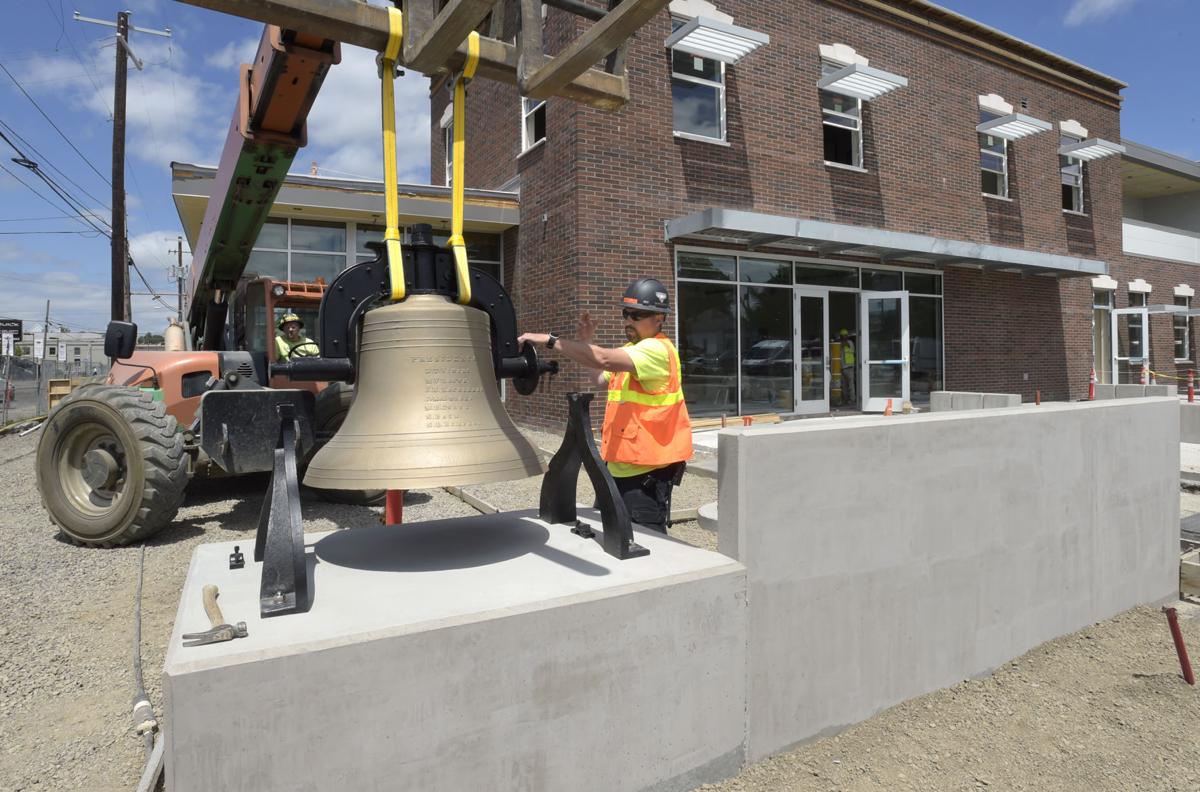 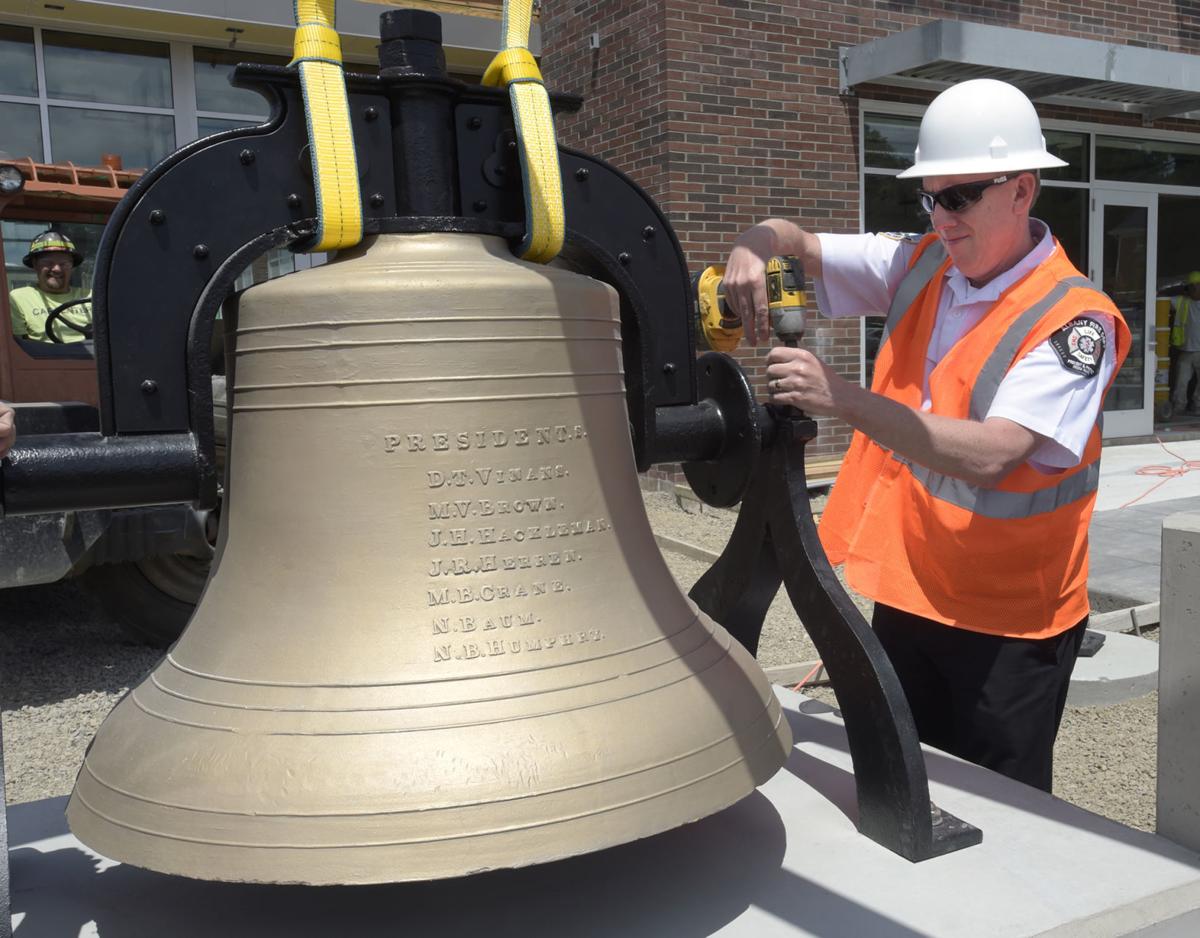 Fire Chief John Bradner fastens down the restored bell at the new Fire Station 11 in Albany. 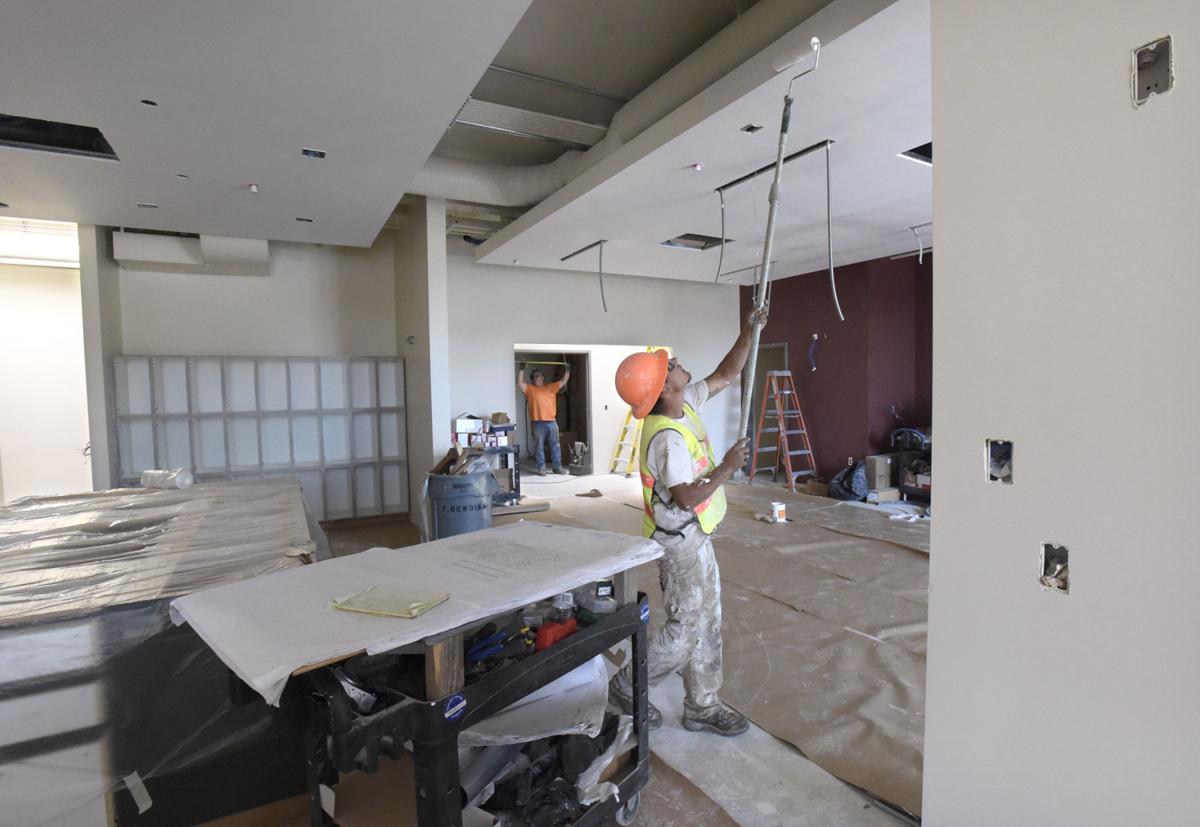 Johnny Marsh of Reeds Painting works on the second floor of the new Station 11 in Albany. The building is expected to be completed sometime in August.

From the rooftop solar panels to the polished concrete floors, just about everything at the Albany Fire Department Station 11 will be new once construction wraps up this August.

Just outside the front door, however, visitors can get a look at a 1,500-pound, 140-year-old piece of fire history: the department's original bell.

The bronze bell, which dates to 1877, was used to call volunteers when the department's station was first established, at the corner of Second Avenue and Broadalbin Street. After that building was decommissioned — sometime in the 1920s, Chief John Bradner speculates — it was moved to the roof of the Linn County Courthouse, where it stayed in use.

Sometime in the decades between 1938 and 1982, the bell fell silent. The department moved it to Station 12 on 34th Avenue as part of its museum, but used it only for decoration.

With the new Station 11 on Lyon Street just weeks from completion, Bradner said the department wanted to bring the bell back.

"We just decided it was time to clean it up and bring it to the new fire station," he said.

Bradner had the bell sent to Michigan earlier this year for refurbishing. Installed Wednesday on its new concrete foundation, it will sit under a big wooden box until construction wraps up, to keep it safe while the heavy equipment moves through the property.

The bell no longer has a clapper and Bradner doesn't intend to get a new one, to discourage anyone from being tempted, say, to send a fire call into the wee hours of the morning. "It would end up being an attractive nuisance," he said.

But it does provide a physical link to the department's earliest days, which was important, the chief said.

"As a department, we're approaching our 150th anniversary. That means something," he said. "One of the things that Albany is proud of as a community is our historic district, our historic areas, and the downtown. Being as this is Albany's downtown fire station, we really wanted to just tie that element in, that historic element."

The bell isn't the only piece of history visitors to the new station will find when it opens later this summer.

Just inside the two-story, 24,300-square-foot station, which was funded through a bond measure approved by voters in May 2015, will be a lobby with pieces of antique apparatus on display. Bradner said the first two will be an 1848 hose cart and a 1927 LaFrance fire truck.

Firefighters also will be able to slide from the second story to the apparatus bay using one of two fire poles: one brand new and one salvaged from the old building, which in turn had been taken from an even earlier structure and might date back to the 1900s.

Otherwise, however, Station 11 is a building for the 21st century.

James Lutz, the Gerding Builders superintendent in charge of the project, can point out the cornicework now made of fiberglass instead of sandstone, to be lighter and more weatherproof. A power backup system will keep the lights on and the heat running even during an outage, something that wasn't possible before. Rebar, interior shear walls and structural steel columns provide the seismic stability the old station, built in 1949, could never offer.

The building is designed with individual bunk rooms instead of one communal dorm, so that both men and women firefighters have equal access to privacy and storage. An elevator helps open accessibility to people with physical disabilities, which will make public meetings possible, Bradner said.

Turnouts, which used to hang in the apparatus bay, now will be kept in their own windowless storage area, stowed away from the light that speeds up the breakdown of the material, Bradner said. And the basement that used to be under Station 11 is gone, which means the heavier trucks can now be parked anywhere in the bay.

In all, the new station will be a far cry from the late 1800s, when horses pulled the fire wagons to a conflagration.

Biden: This is the decisive decade on climate

Biden: This is the decisive decade on climate

Video: Return of the Bell

The restored 1877 bell returns to its new home at Fire Station 11 in Albany.

John Bradner doesn’t have a lot of memories from kindergarten, but he does have at least one.

Fire Chief John Bradner fastens down the restored bell at the new Fire Station 11 in Albany.

Johnny Marsh of Reeds Painting works on the second floor of the new Station 11 in Albany. The building is expected to be completed sometime in August.