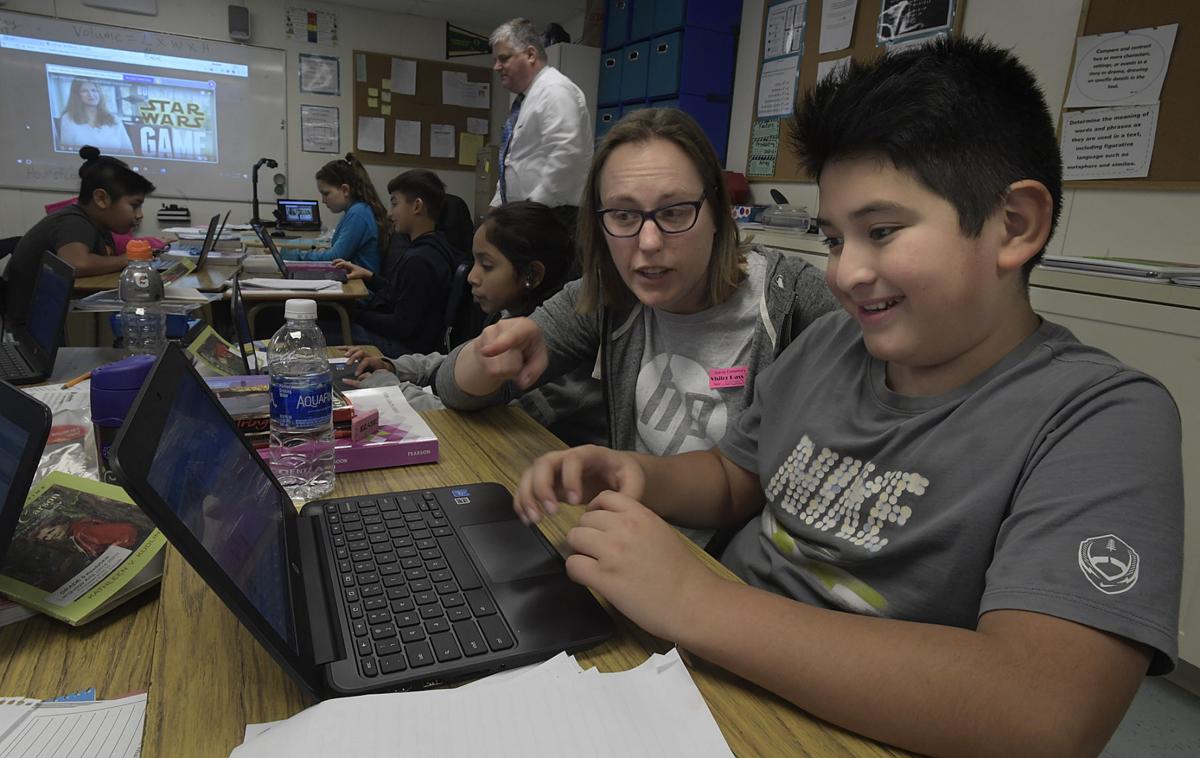 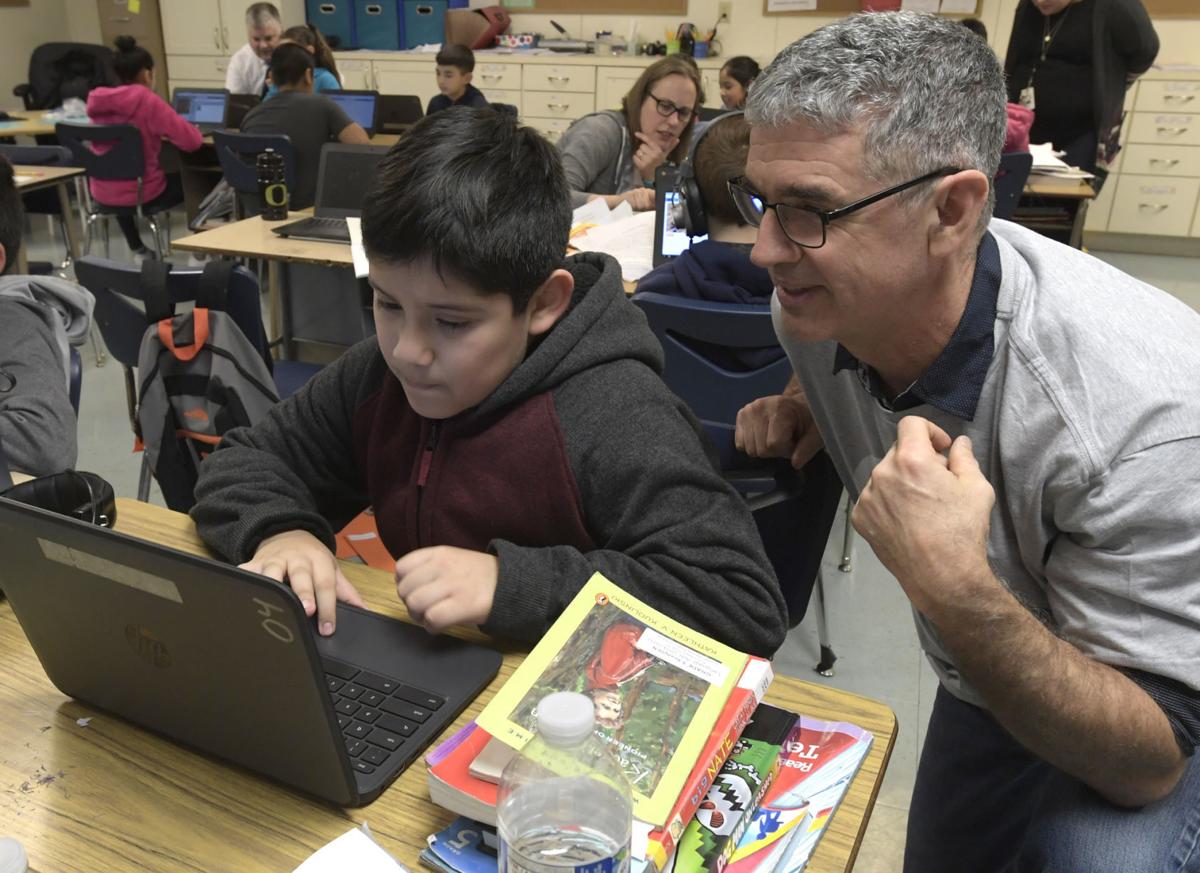 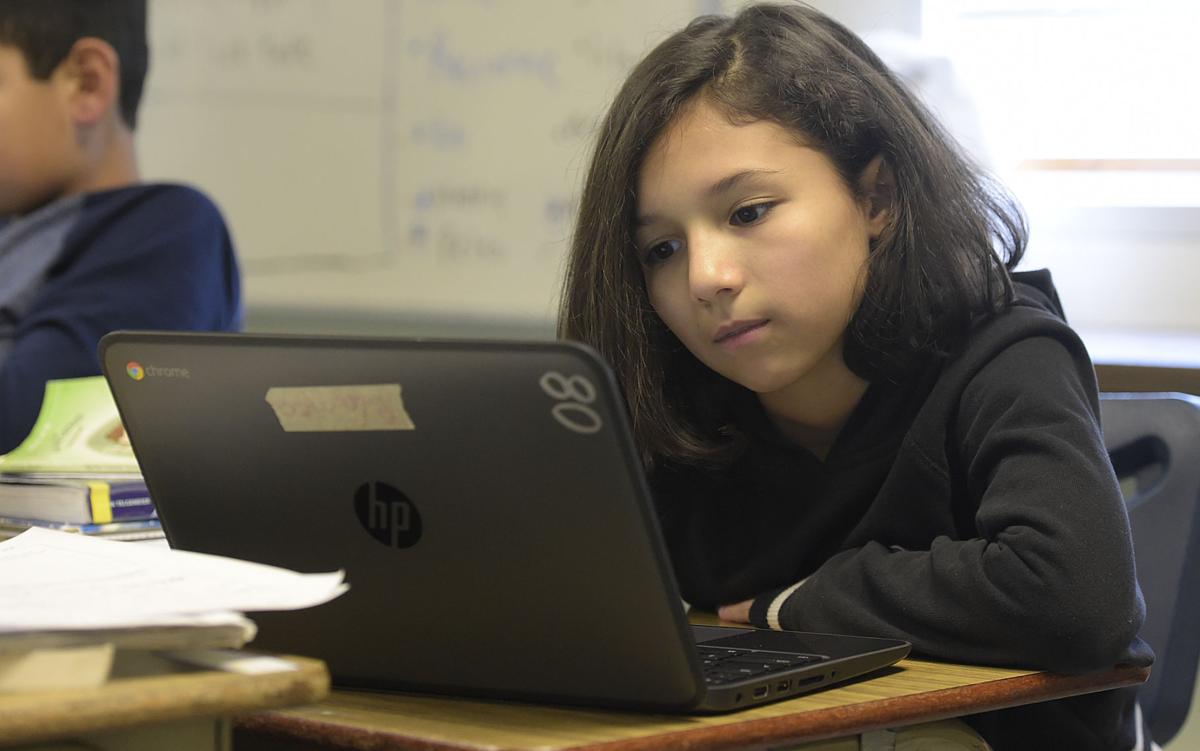 Bianca Chavez, 10, tries for the next level in her computer coding game, "Building a Galaxy with Code." 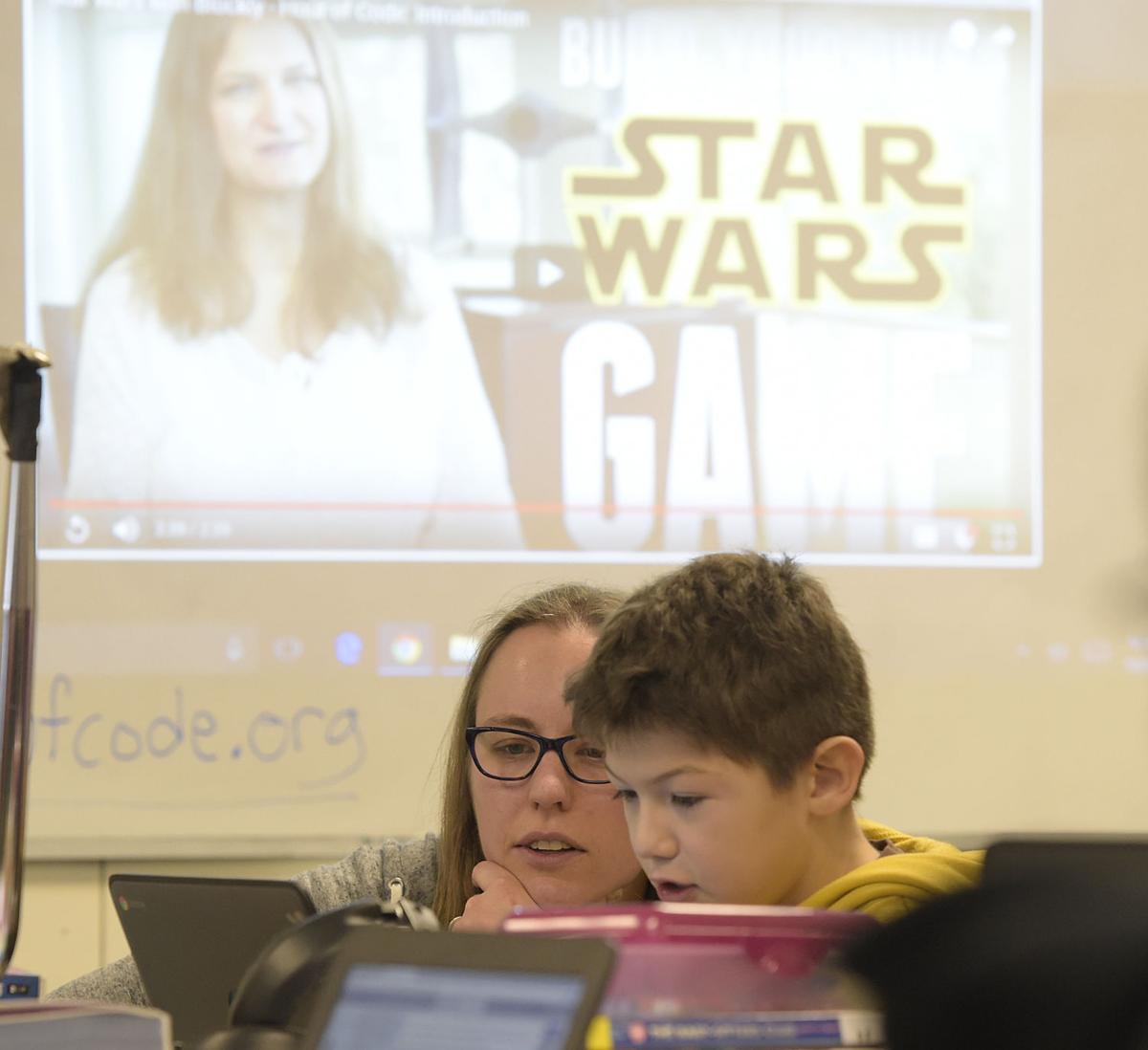 Jamie Keymolen, 10, right, gets assistance from HP engineer Rosanna Bigford during "Hour of Code" on Tuesday at Sunrise Elementary School. 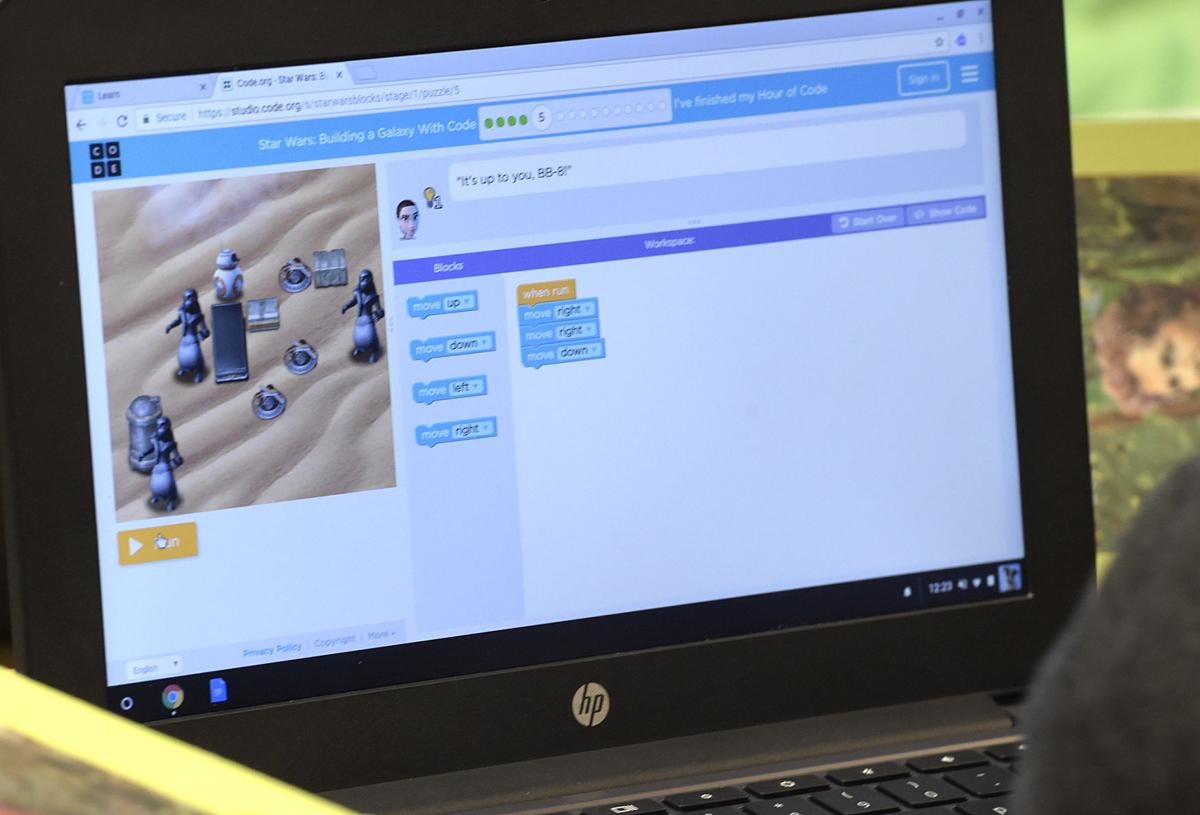 Ten-year-old Bianca Chavez has her future all planned.

"Pediatrician, dancer, a doctor and find a cure for cancer," the Sunrise Elementary School student recited.

Nowhere on the list was computer coding. But on Tuesday, the fifth-grader got a taste of what that might be like, just in case someday she changes her mind.

"This is actually my first time, but I like it," she said, tapping away at her classroom Chromebook.

Bianca and her classmates participated in "Hour of Code," an international event meant as a one-hour introduction to computer science.

HP Inc. of Corvallis participates in the activity each year, sending volunteers to various schools in Linn and Benton counties during Computer Science Education Week.

On Tuesday, Sunrise welcomed Rosanna Bigford, a hardware engineer, and Frank Glass, a process engineer, both of HP, to Emmanuel Luvert's fifth-grade classroom.

"All of you are going to program your own 'Star Wars' game," Bigford told Luvert's students, to gasps of excitement.

The young programmers' task was to send BB-8, the ball-shaped astromech droid from "The Force Awakens," spinning around a computer screen to pick up pieces of scrap metal.

Bigford and Glass roamed the classroom, showing students how to drag and drop blocks of coding text, stacking them one atop the other, to make BB-8 turn right or left and move up and down to chase after the scrap icons.

"We want the kids to see how accessible computer science is and how fun it can be," Bigford explained.

Computers are involved in nearly every aspect of modern life, she went on, so even if students don't study coding, knowing how to manipulate the machines is important. "It's a good skill set for kids to have."

At 88 percent of 400 students, according to the 2016-17 school report card, Sunrise has the largest number of economically disadvantaged elementary students in Greater Albany Public Schools. Principal Bob Daugherty and district officials have made adding technology to the school a priority to make sure everyone has access.

For the first time this year, all students in second through fifth grades have their own Chromebooks to use. Kindergarten and first grades use iPad tablets, though not on a 1-to-1 ratio, Daugherty said.

Mercedes Strowbridge, the instructional coach who works with Sunrise teachers to help them explore technology, said the machines are used in a variety of ways. They allow individual lessons in small groups, so students can practice math, for instance, at various levels. They're sometimes used as an enrichment tool, or an incentive for getting work done on time.

And, Strowbridge said, they teach students keyboarding skills — which, among other things, are critical for the Smarter Balanced state assessment tests.

In Luvert's classroom, however, the emphasis was on learning how to give a computer step-by-step instructions to perform certain tasks.

It's like doing a math packet, explained Jamie Keymolen, 10. "If you mess up, you have to start all over."

And, shortly after that, he did.

"Aw, I messed up. I messed up by one!" Jamie groaned as his droid spun to a stop just short of a goal.

But sometimes, all it takes is a small adjustment. Bigford looked over the coding steps Jamie had stacked. "What can you add?" she asked.

"I can add two down," Jamie said, adjusting his programming so the droid could achieve its objective.

And for "Star Wars" fans, there's a benefit most math packets don't provide: the chance to program BB-8 or his older astromech counterpart, R2D2, to rescue Rebel pilots or repel intruders.

Community members gathered at the Cumberland Church Sunday morning in the crisp, cold air to watch the historic building move to its new location.

The Linn County Board of Commissioners on Monday, Oct. 18 voted to declare a state of emergency over concerns the statewide vaccine mandate fo…

The state of Virginia is seeking to extradite an Oregon State University faculty member for alleged sex crimes said to have occurred there.

Monday was the deadline for all school employees to be fully vaccinated or granted a religious or medical exemption, per Gov. Kate Brown’s vac…

Bianca Chavez, 10, tries for the next level in her computer coding game, "Building a Galaxy with Code."

Jamie Keymolen, 10, right, gets assistance from HP engineer Rosanna Bigford during "Hour of Code" on Tuesday at Sunrise Elementary School.