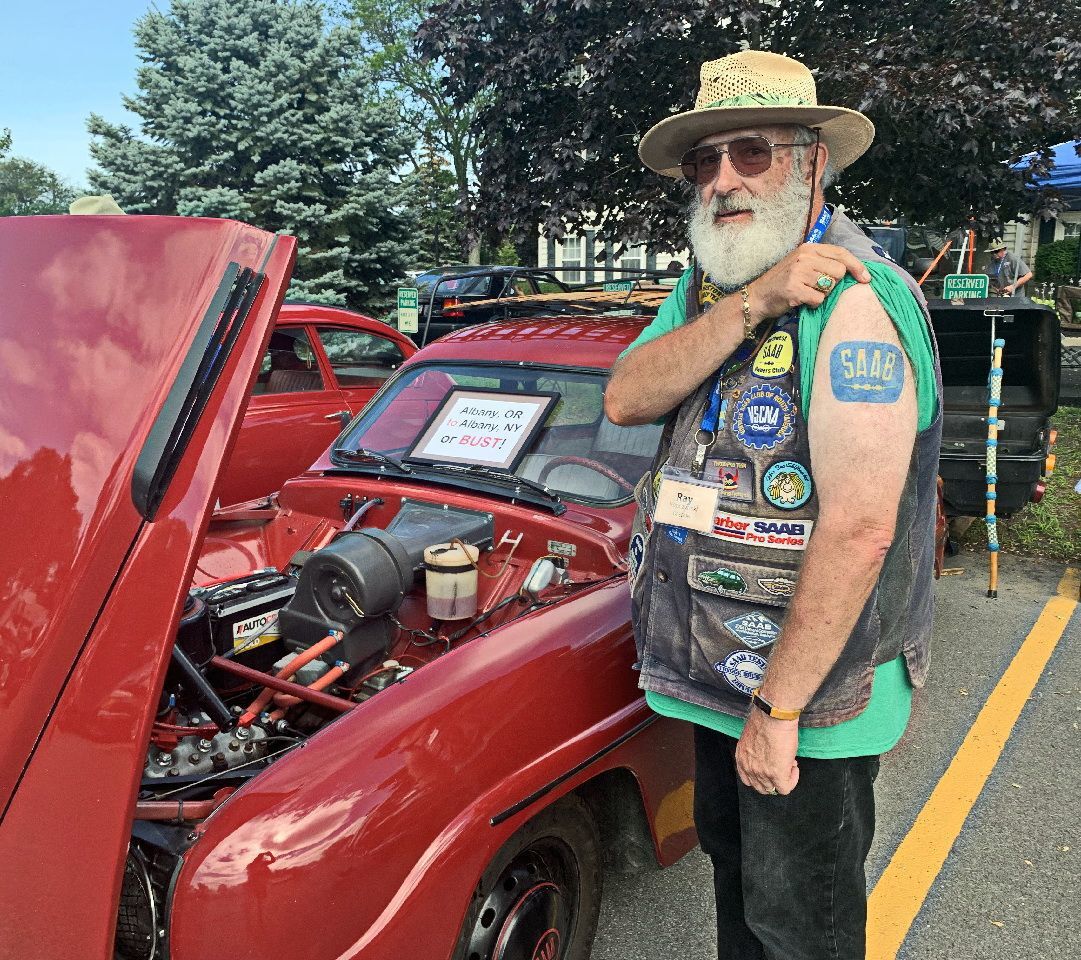 Ray Kopczynski of Albany is all-in on Saab automobiles, and he has the tattoo to prove it. The Albany City Council member is pictured here at the annual Saab convention in New York last month. 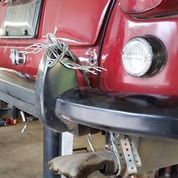 An improvised fix kept the muffler on Ray Kopczynski's Saab from dragging on the pavement for a bit. But then it failed and he needed a real fix on his cross-country quest.

That's how Ray Kopczynski described the back-to-back cross-country odyssey he took this summer from Albany, Oregon, to Albany, New York, in his 1965 3-cylinder Saab 96.

A fan of the Swedish vehicles since meeting his wife (and her brand-new Saab) almost 50 years ago, the Albany city councilor figured traveling in his '65 to the 2021 Saab convention in New York last month would be a dream trip in a dream rig.

It was, indeed, the stuff of dreams. Nightmares, too.

"The heat was over 100 and the humidity was probably 90%," he went on. "There was no air conditioning — what I call air by 55; you've got the windows rolled down. That really sucks it out of you. I was drinking bottled water and dumping it over my head as I drove."

Heat also became an issue when Kopczynski had to turn on the car's heater, which he did to help cool the engine as the Saab chugged over the Rockies. Traversing the Continental Divide meant putt-putting along at 20 mph in third gear with the heat at full blast.

The heat also reduced his desire for meals to simple snacks, with the end result that between sweat and calorie reduction, Kopczynski lost about 10 pounds over the course of the trip.

Toll roads were another puzzle. Kopczynski had never experienced a toll road, which drivers must pay a fee to use.

"A lot didn't take cash or credit cards. You're supposed to have these passes," he said. "Without that, they tell you, 'We'll notify your DMV and we will send you a bill 30 to 45 days later.' I presume that's going to happen, because I didn't pay for a lot of the tolls."

The worst issue, however, was a muffler problem that Kopczynski said nearly cost him his sanity.

Even when running perfectly, the engine of a '65 Saab sounds sort of like a swarm of bees crossed with a chainsaw, which is partly why Kopczynski brought noise-canceling headphones for the trip. But right on the first day out, July 6, the Saab stopped running perfectly. The issue would prove to be a long-term problem, although it wasn't at first.

Kopczynski was 10 miles west of The Dalles when he noticed people in passing cars were waving at him. At first he thought how nice that was for them to acknowledge his historic trip — and then he realized his muffler was dragging and sparking against the pavement, causing a noise he hadn't heard because of the headphones.

He managed to get to The Dalles, where he used heavy wire and plumber's tape to reattach the muffler. Traveling companion John Collins helped further stabilize it.

Several days later, in Fort Dodge, Kopczynski and fellow Saab fan Tom Donney went over Kopczynski's rig for more tweaks, including re-torquing the head gasket, adjusting the throttle spring in the engine bay and replacing the speedometer, which had gone "seriously wonky," he said.

Kopcyznski figured everything was set for the last push. He'd been warned about traffic around Chicago and left early in the morning to miss the bulk of it, but nobody had mentioned what appeared to be the state's biggest road construction project.

"So since I went in the morning, it was dark, and it was also raining," he remembered. "With the road construction going on, their signs were minimalist: where you were supposed to go. My only saving grace was I had my Bose headphones, and Google Maps which worked fine, so I had a lady talking in my ears about where to turn and how far. That was absolutely wonderful. I hadn't tried that before. If I hadn't had that, who knows where I would have been?"

Just before the convention, in Saquoit, New York, the plumber's tape on the muffler gave out, and that was right about the same time as the Saab's horn died and Kopczynski started experiencing shifting problems. Saquoit has a Saab shop — Claude Hutching's Tired Iron Repair — and Kopczynski was able to get a repair job on the muffler mount. The other issues waited another 100 miles, until Kopczynski checked in at the convention and found other Saab fans to ask.

Talking with other Saab drivers was the best part of the trip, Kopczynski said. He received the Long Distance Award for his journey, and his rig won the People's Choice award for the 95-96 category. All during the convention, he shared tales of his travels with others at the convention, handing out flyers about his car and making deals for spare parts, such as a window-winder he suddenly found he needed.

When it was time to head back west, he figured by now, anything that was going to go wrong had already gone wrong.

He was 20 miles west of Three Forks, Montana, when the patched-up muffler began to lose hold.

When it went, it went with a bang. Even the headphones were no match for noise power of that magnitude.

"That made it so my car had no muffling at all. And that is teeth-rattling, brain-bending noise. That'll wake the dead," Kopczynski said.

This happened on a Sunday, and in spite of a 45-minute effort on the part of AAA, Kopczynski couldn't find anyone to work on the car. He couldn't even get a tow once the company learned he had a trailer. So instead he set his jaw against the sound — chainsaws on steroids, he said, or maybe a machine gun a few inches from your ear — and drove nearly 500 more miles to Lewiston, Idaho. There, he was finally able to find a place for another repair, which he said saved both his hearing and his sanity.

He made it the last 400 miles home without incident. About a week ago, he had the entire muffler replaced.

"That's my story and I'm sticking to it," Kopczynski said of the journey as a whole.

So no, he stressed, "I wouldn't do this trip again on your life. On my life. Not with that heat and humidity. That was not good at all."

OK, so maybe not to New York. But it's not like he'll never go anywhere in the Saab 96 again. In fact, next year's Saab convention is in Sturgis, South Dakota, the location of the national Saab museum, and Kopczynski is already making plans.

'A bed for every head': Albany man designs 'Sleep Trailer' for emergency shelter

Jason Christensen of Albany was on his way to work in Salem one day when he saw a man sleeping outside under the overhang of the roof of a business.

Ray Kopczynski of Albany is all-in on Saab automobiles, and he has the tattoo to prove it. The Albany City Council member is pictured here at the annual Saab convention in New York last month.

An improvised fix kept the muffler on Ray Kopczynski's Saab from dragging on the pavement for a bit. But then it failed and he needed a real fix on his cross-country quest.