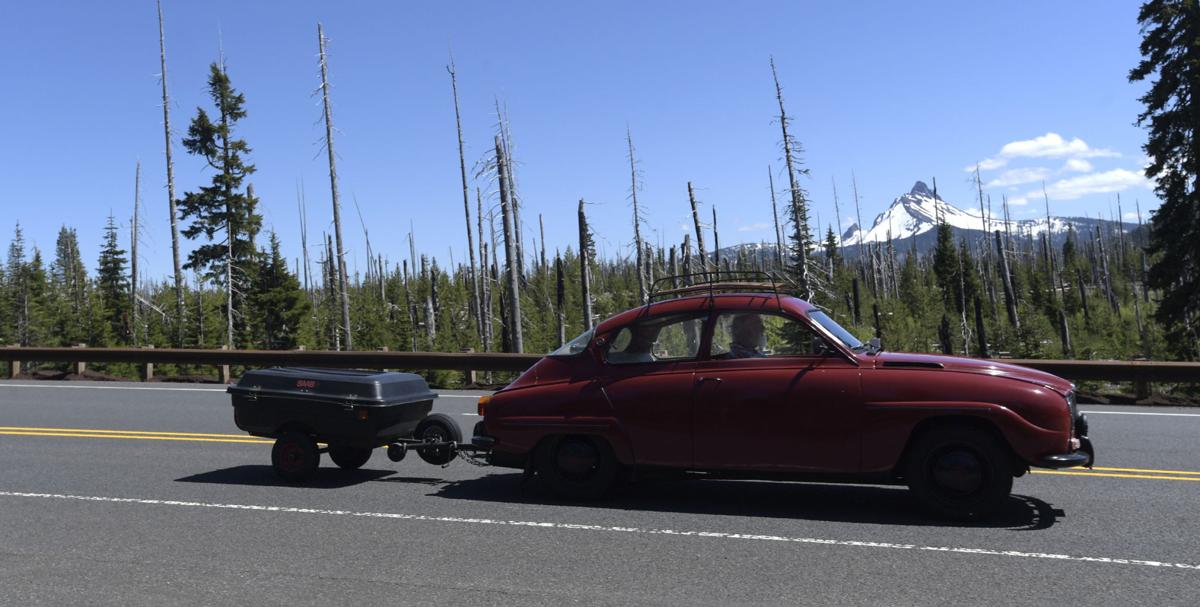 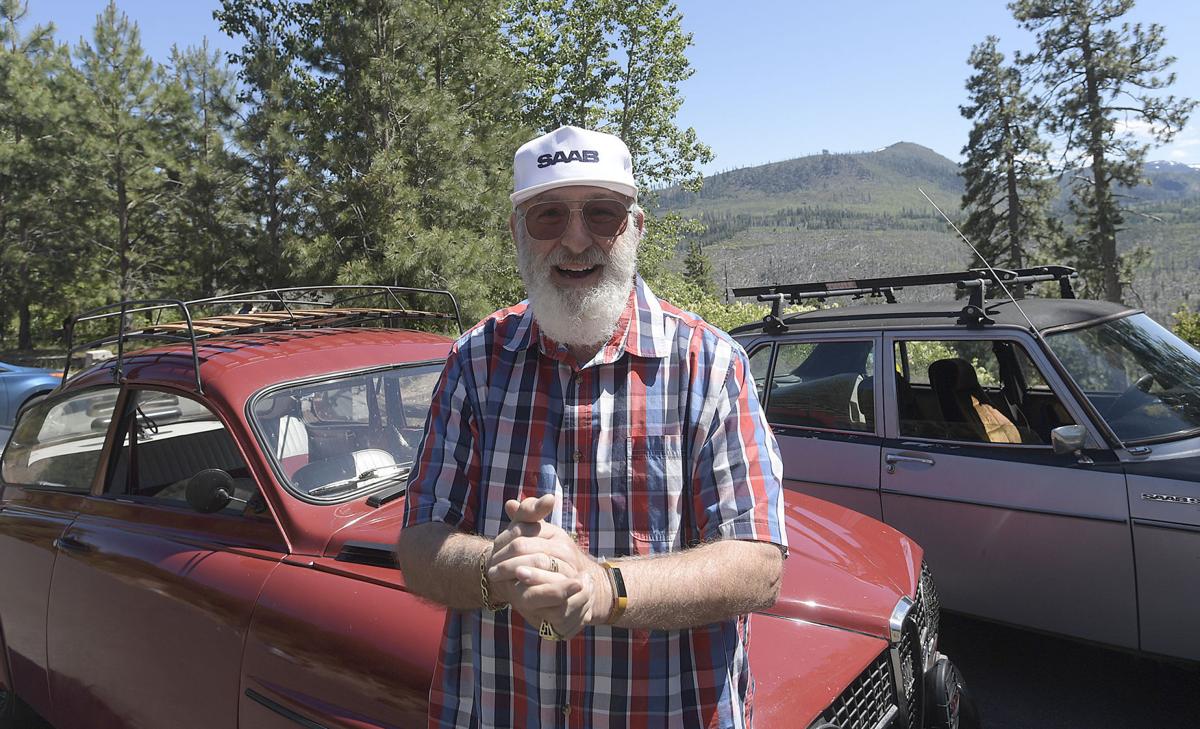 Ray Kopcynski was set to depart Tuesday for a 6,400-mile round-trip drive in his 1965 Saab from Albany, Oregon to Albany, New York. 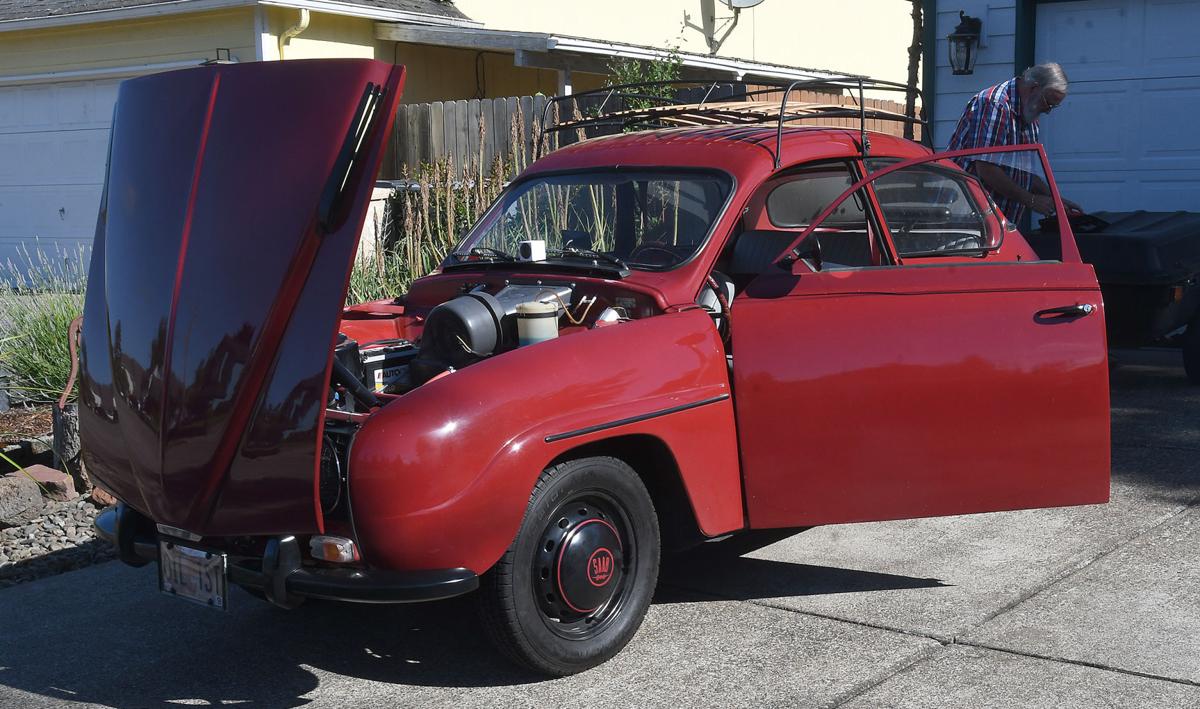 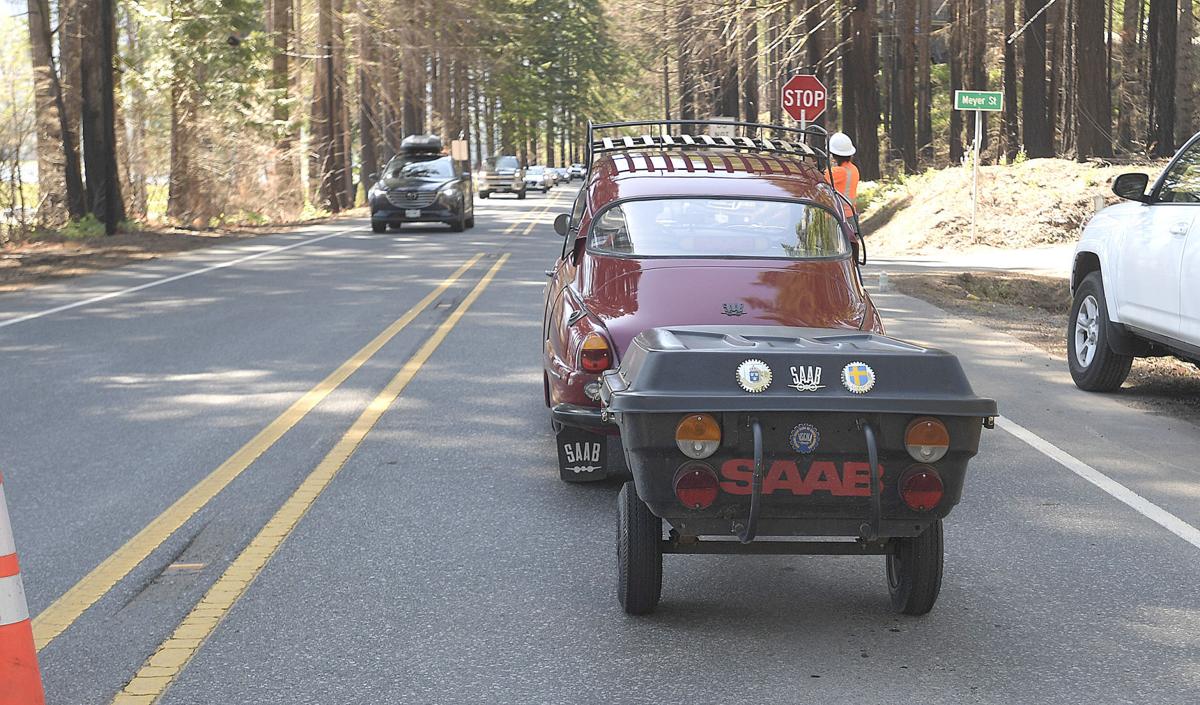 Ray Kopczynski used his shakedown drive to see how his 1965 Saab would handle a small trailer that he will pull between the two Albanys on his cross-country drive. 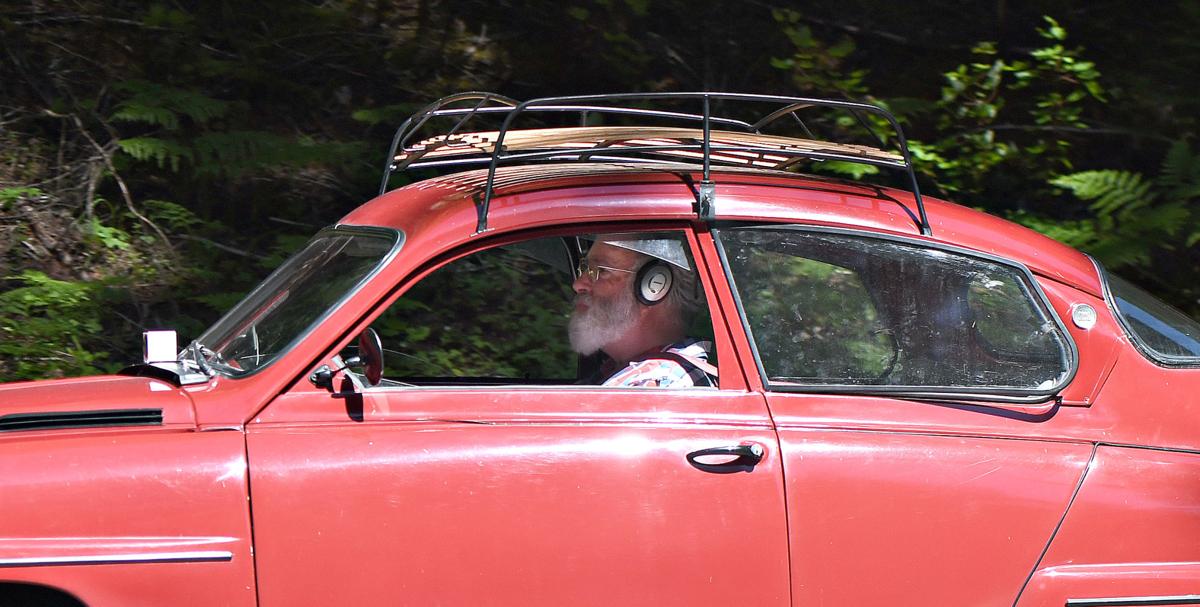 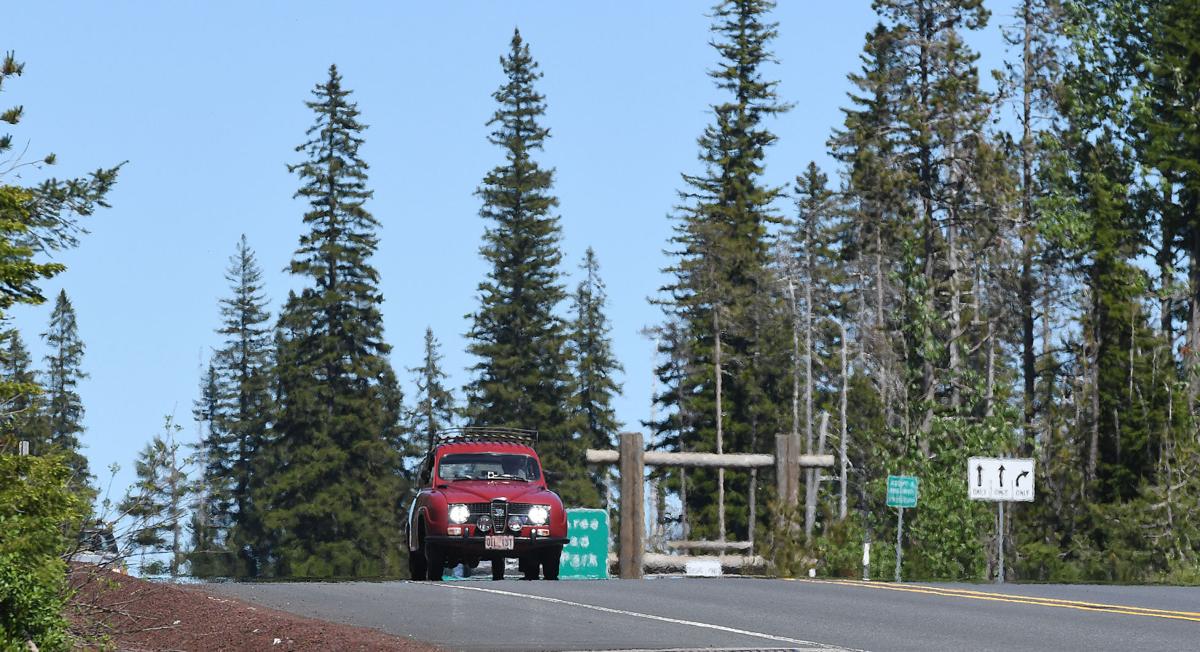 Ray Kopczynski's test run over Santiam Pass will be similar to the climb he must do over LoLo Pass on the continental divide.

Albany City Councilman Ray drives along Highway 22 near Marion Forks in East Linn County during the shakedown drive of his 1965 3-cycle Saab .

The Albany man kept both loves all through the ensuing decades, and both are still going strong. Yes, they know about each other. In fact, the first has encouraged the second to this day. And even though only the second one is going with Kopczynski on a "bucket list" trip to New York this month, the first isn't even jealous.

It might help that the first one is Kopczynski's wife, Pat, and the second is a Saab.

Saabs are Swedish cars that date back to the 1940s but are no longer being manufactured. Ray and Pat own three of them and frequently travel to Saab conventions to swap stories and trade scrap parts.

Ray Kopczynski has long wanted to do a cross-country trip in one of his Saabs. When a fellow Saab fan mentioned he was traveling to this year's convention in Albany, New York, the weekend of July 17, Kopczynski asked if he wanted company. Trip planning began, and Kopczynski is slated to leave Tuesday, traveling with consecutive "shepherds" and hauling a small Coleman caboose trailer.

Saabs are not exactly built for long-haul endeavors. The one Kopczynski plans to take is a 1965 3-cylinder that needs oil and gas mixed to a specific ratio at each stop and isn't particularly enthusiastic about steep inclines.

"Many Saab friends have indicated I've lost a few screws for even attempting it," Kopczynski wrote in an email description of his travel plans, which are expected to take about three weeks total. "What the heck, it's only about 6,400 miles and 2x over continental divide. What could go worng (sic)?"

But the trip — like the Saab itself, and like Pat, who introduced the two of them — is a love story. And love stories aren't necessarily grounded in logic.

Here's how it all began:

Kopczynski grew up in the Wenatchee-Cle Elum and Auburn areas of Washington, but then moved to Oregon and graduated from Corvallis High School in 1966. He was at Oregon State University for a year and then enlisted in the U.S. Army, serving as part of the Army Security Agency. He was stationed in Okinawa, Japan, for two-and-a-half years.

When he came back stateside, he was sent to Vint Hill Farms Station in Manassas, Virginia. A buddy from Okinawa had recently been married and invited Kopczynski to join him, his bride and his bride's best friend on a date.

"Why me?" Kopczynski asked. The answer: "Well, you're tall."

"I said, 'Thanks a lot. You're setting me up on a date with an old maid librarian?'" Kopczynski remembers saying.

However, then he met the "old maid librarian," who, at her brother's encouragement, had just purchased a brand-new 1970 Saab 96 V4 with a four-stroke engine.

All through the decades, the Kopczynskis kept Saabs. They drove that first one "into the ground," Kopczynski said, taking it on a delayed honeymoon in 1972 and traveling across the nation. They ended up in Roseburg, where Kopczynski started a 24-year career with JCPenney, traveling around managing departments and multiple stores in Roseburg, California, Nevada, Oregon and Wyoming. After that, they came back to Oregon and bought a home in Albany.

These days, Kopczynski is a member of the Albany City Council and a volunteer with the downtown historic carousel. And since 2004, he has been the editor of the Vintage Saab Club of North America newsletter, "Vintage Views," a 40-page glossy quarterly he puts together.

Saabs came and went all during that time. In 2004, the same year Kopczynski began editing the newsletter, the couple came across a Saab at a convention that was nearly identical to Pat's first car. Its vehicle identification number was only 150 off from the one Pat had owned. They inquired about a sale, but at the time, the owner wasn't interested.

Five years later, the same Saab came up for sale at a different national convention. Kopczynski quietly made an arrangement with the owner, then got the event's emcee to give him the microphone for a minute during the final banquet of the event. He then got up on stage, told the story of meeting his wife and her original Saab, and said to Pat, "You see that Saab out on the parking lot? Here's the keys."

The couple went home in matching Saabs. "I had guys just glaring at me," Kopczynski said, laughing. "'Geez, Ray, I get my wife roses, you get yours a restored Saab.'"

It's not that Saabs are luxury vehicles. Created when the Svenska Aeroplan Akti Bolag (SAAB for short) switched from airplanes to vehicle manufacturing shortly after World War II, they were meant to help the company diversify.

The first production model Saab 92s rolled into view in 1949. They had water-cooled, two-cylinder, two-stroke engines with a horsepower of 25.

Six years later, Saab introduced a redesigned and re-engineered vehicle, the Saab 93, with three cylinders. Five years after that, the first imports hit the United States. The Saab's claim to fame was winning the international Monte Carlo rally two years in a row, 1961 and '62, against cars with much larger displacement engines. Hills are a challenge, but few could take them on a flat straightaway.

The company had its fans, but never could sell enough cars to keep up with new designs year after year. General Motors bought Saab in the 1990s and then closed it down when the recession hit in the mid-2000s. A Chinese conglomerate eventually bought the pieces but let the Saab name go.

Kopczynski has driven many a Saab in his time — the couple's third Saab is a 1972 station wagon model — but he wanted the 1965 96 sedan as his cross-country travel rig specifically because its 3-cylinder, 2-cycle engine brings it closer to the Saab roots. It needs a ratio of 40 to 1 gas to oil (about a pint and a half of oil for each 8-gallon tank) and sounds like a chainsaw. Going over the Cascades earlier this month on a test run, the car performed "flawlessly" — all he had to do was drop to 40 mph in third gear and turn on the heater.

And yet, there's something about the unusual little car from Sweden that keeps Kopczynski firmly in the driver's seat. Maybe it's the automatic conversation piece he can trade with anyone he meets on the road. Maybe it's the fact that the only available air conditioning comes from opening a window at 55 mph.

Remember, it's a love story.

"Many people talk with me at gas stops, shopping, even at the carousel," he said. "Conversations ensue around, 'I remember those when I was back in college, or, 'I/my friend(s) had one many years ago, or, 'Is that a Volvo?' or, 'Why does your license plate say, OIL 1ST?'"

People used to drive Saabs cross country all the time, but that was when there used to be a nationwide network of dealers to help. That's no longer the case, Kopczynski said. If he makes it without a hitch, it will be a good story. If he doesn't, well, that makes for a good story, too.

"All I have to do is get over Lolo Pass (at the Montana border) and I'm coasting all the way down," he said.

John Collins of Jefferson, a fellow Saab enthusiast, did the test drive with Kopczynski to Sisters and is going to drive with Kopczynski as far as Sturgis, South Dakota. From there, Kopczynski will be on his own till he gets to Fort Dodge, Iowa, where he'll meet his second "shepherd," Tom Donney, creator and driving force behind the Saab Heritage Car Museum USA. The two of them will head on to the convention in Albany, New York.

Pat isn't going on this particular trip. The '65 is "more temperamental" than she likes, Kopczynski said. So they'll continue their love story by telephone instead.

And this October, he and Pat — and the Saabs — will celebrate their 50th anniversary together. Kopczynski figures they'll maybe have a small party at the carousel where he volunteers; maybe go to the coast.

After 33 years on the job, Tangent City Manager Georgia Edwards is retiring as of June 30.

Keeping order between the lines: Mike Corwin closes in on 50 years of umpiring

Mike Corwin took a familiar position late Thursday afternoon down the line behind first base at Taylor Field.

Ray Kopcynski was set to depart Tuesday for a 6,400-mile round-trip drive in his 1965 Saab from Albany, Oregon to Albany, New York.

Ray Kopczynski used his shakedown drive to see how his 1965 Saab would handle a small trailer that he will pull between the two Albanys on his cross-country drive.

Ray Kopczynski's test run over Santiam Pass will be similar to the climb he must do over LoLo Pass on the continental divide.

Albany City Councilman Ray drives along Highway 22 near Marion Forks in East Linn County during the shakedown drive of his 1965 3-cycle Saab .