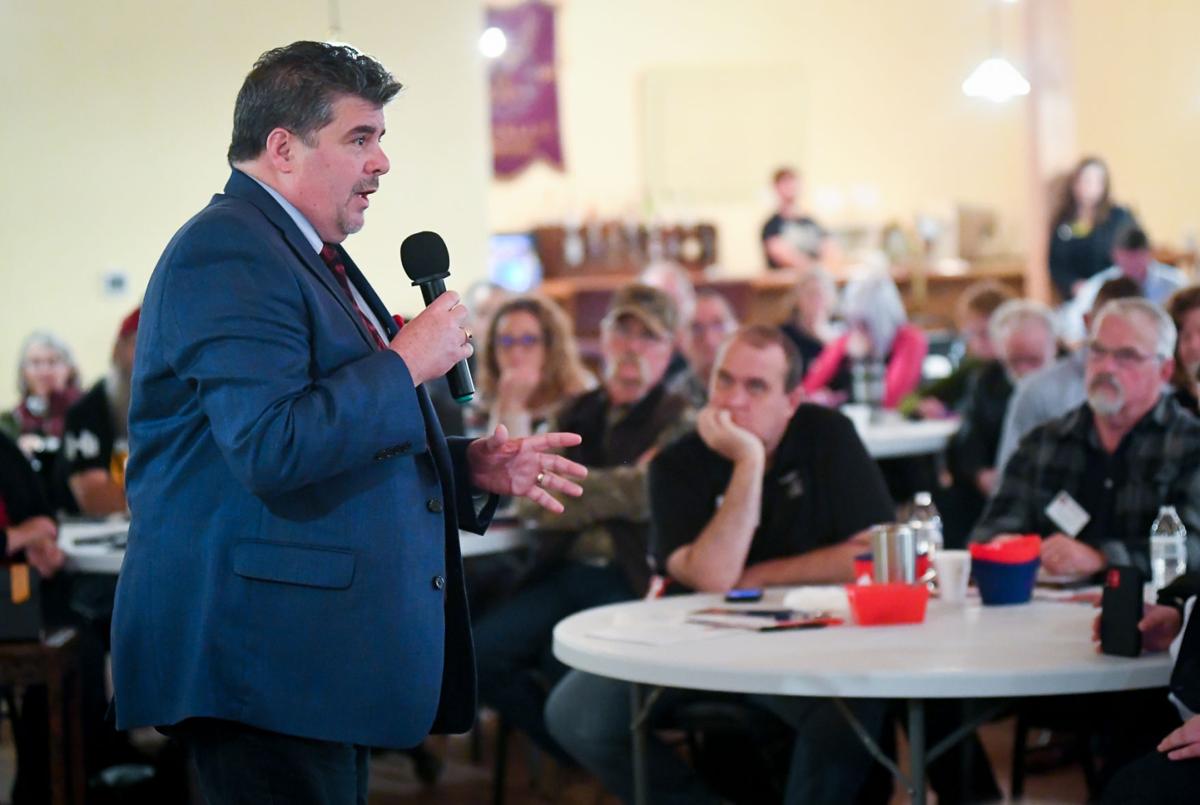 Paul Romero answers questions during a forum for eight GOP candidates for governor held Wednesday evening at the Corvallis Elks Club by the Benton County Republican Party. Romero focused largely on his efforts to highlight election fraud in his opening remarks. 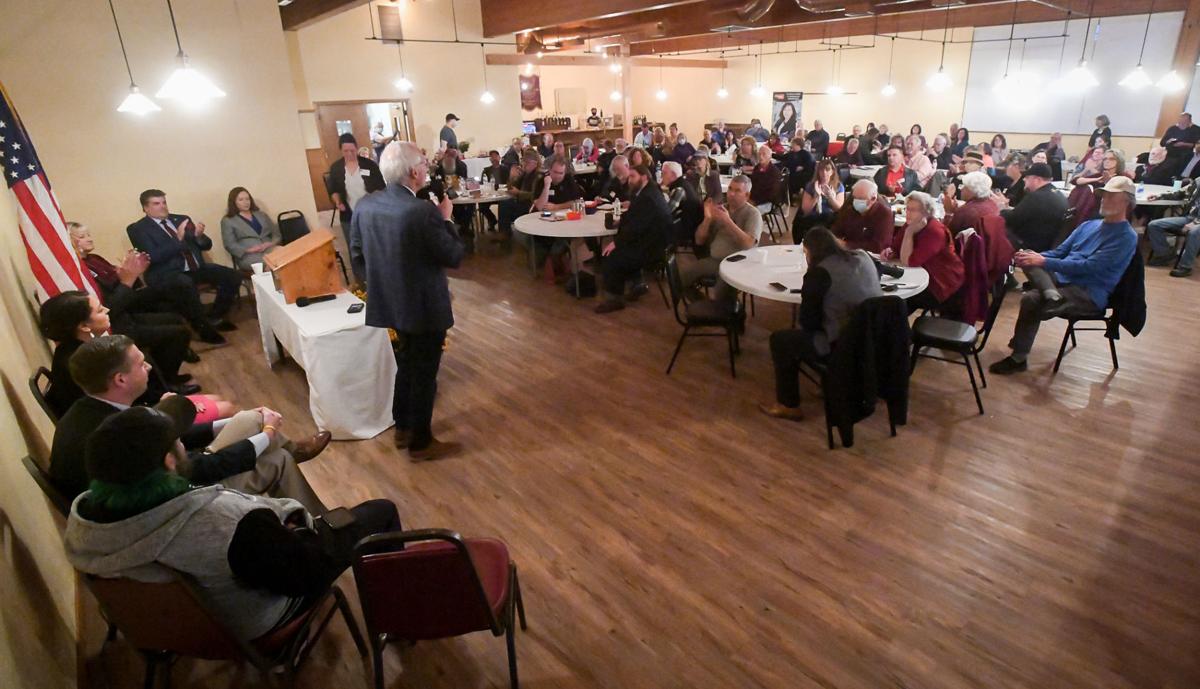 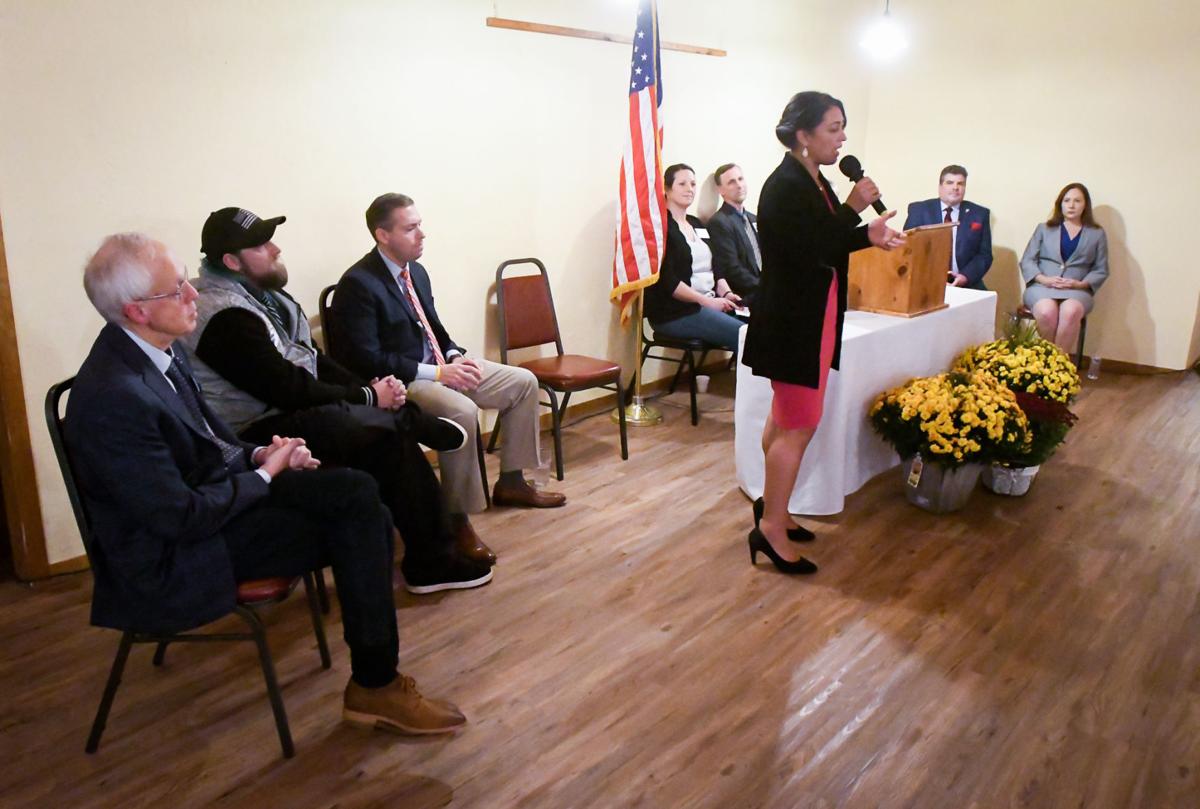 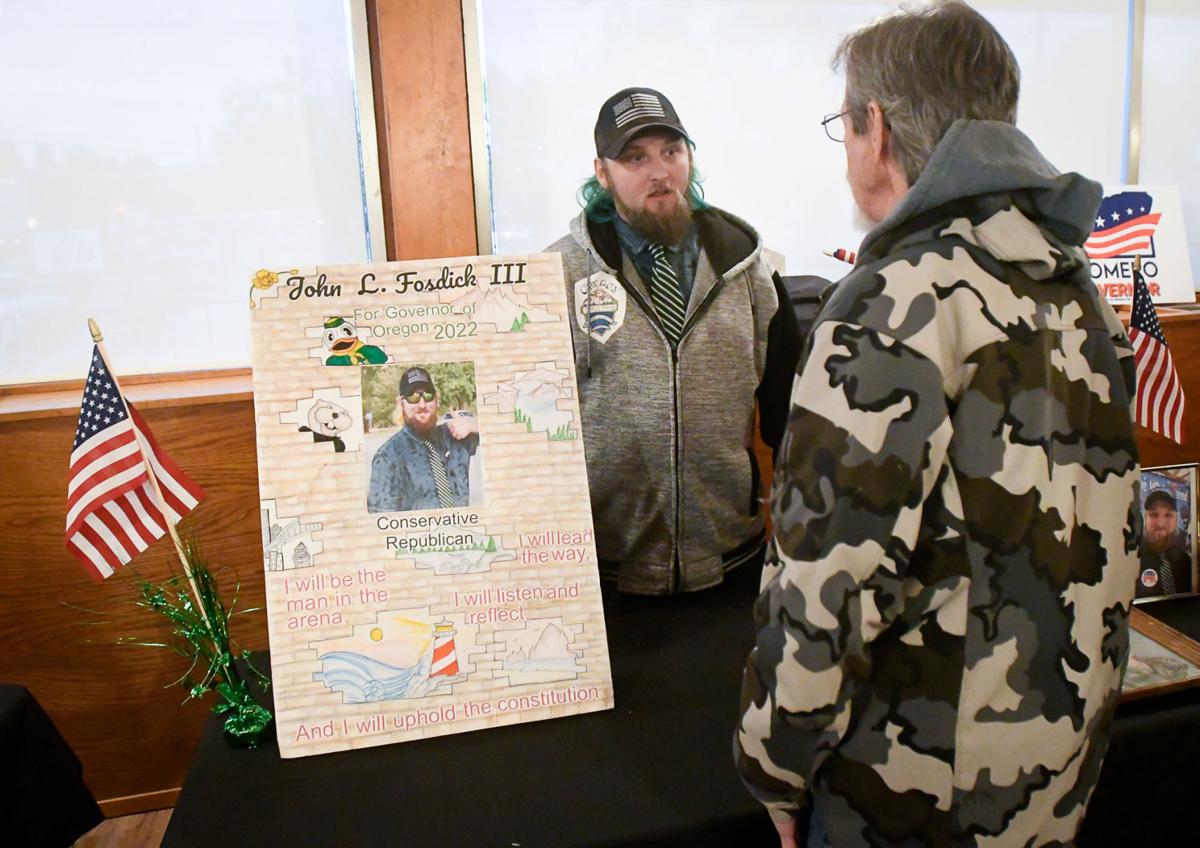 John Fosdick III, who served in Iraq in 2009 and 2010, said he wants more young people to get involved in politics. Fosdick is 33. 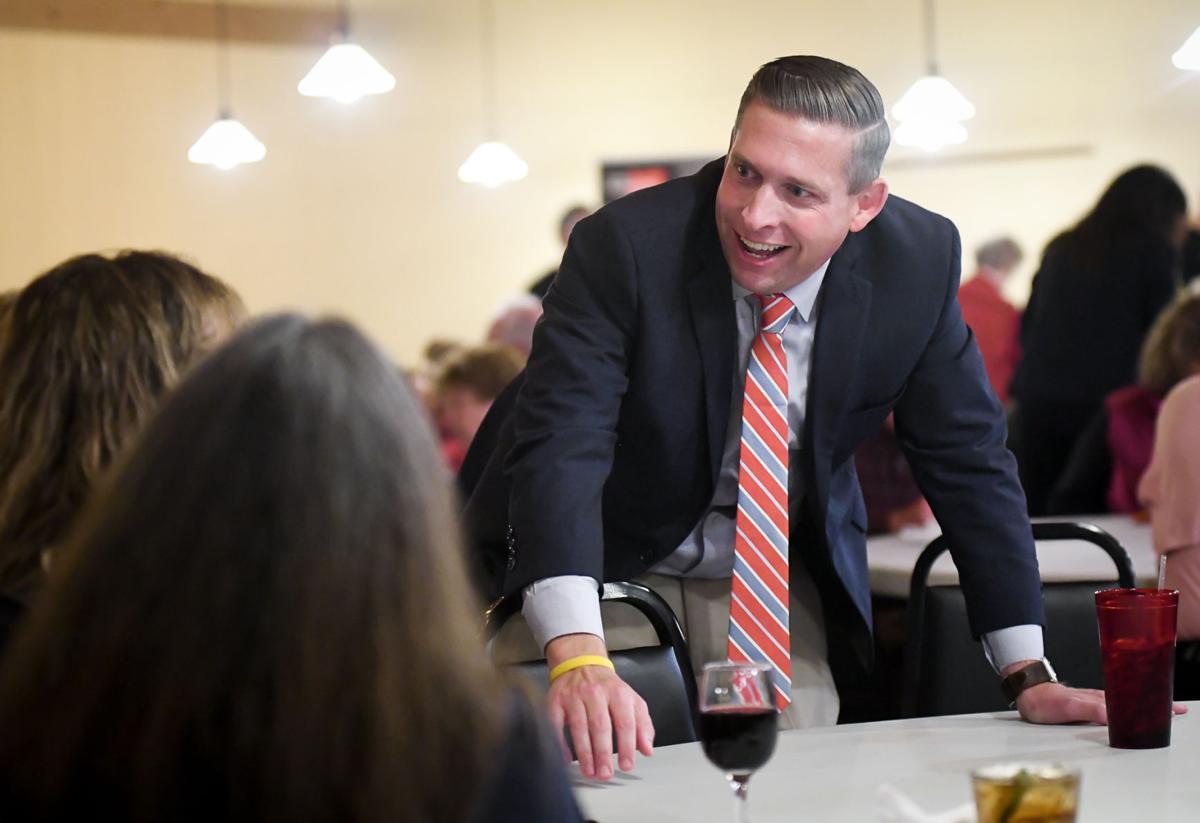 Stan Pulliam talks with audience members before the start of a forum for eight GOP candidates for governor Wednesday evening at the Corvallis Elks Club.

Eight Republican candidates for governor answered questions from a forum audience at the Elks Lodge in Corvallis on Wednesday, Oct. 13 on a night in which the party’s response to the coronavirus pandemic was on full display.

Almost no one inside of the venue wore a mask during the forum despite signs at the front encouraging their use and indoor mask mandates still in place. This opposition to masks was reflected in the remarks of some candidates, and it was by no means the only clear frustration with the realities Oregonians have been living with during the era of mandates.

If there was one overarching theme of the night, it was “take back our state.” Every candidate used some version of the term, with all of them calling the Nov. 8, 2022, election “winnable” for a Republican candidate. None want another eight to 12 years under a Democrat in the statehouse.

With Gov. Kate Brown term-limited and unable to seek reelection, the field is wide open this time around.

On the Democrat side, nine candidates have declared their intentions to run so far, and several others are forming exploratory committees. The most well-known so far include House Speaker Tina Kotek, State Treasurer Tobias Read, retired Portland businessman Wilson Bright and 2018 Independent candidate for governor Patrick Starnes.

The candidates acknowledged that it will take a lot to do what no Republican has done since Vic Atiyeh in 1982: win the governorship. The candidates were amicable toward one another, and most agreed they would be happier with anyone up on the stage over whoever the Democrats put forward.

But despite Oregonians consistently voting blue, none of the GOP candidates distanced themselves much from President Trump’s style of conservatism.

One of the most notable exchanges was between Pulliam and Pierce. Pulliam asserted, in answering a question from the audience about abortion, that Pierce ran previously as a pro-choice candidate in 2016, though on Wednesday night said he was pro-life.

Pierce took time out of the next question answering period to say he has “viewed the issue of right to life with more clarity” later in his life.

He also turned and addressed Pulliam directly: “If you want a unified Republican Party, unifying behind a candidate, you need to be very careful about how you handle these kinds of forums. That can lead to maybe success in the primary but failure in the general. People should be careful with their comments.”

Benefits of the forum

Organizers of the forum said it was planned during the lull period in the election cycle. Despite so many early entrants, candidate forums typically don’t kick into high gear until the spring.

“One thing that was voiced to us in August was that to do this in October would keep the candidates busy during this time that is sort of dead time, so early before the election,” Benton County GOP Chair Julia Wegner said. “It keeps their faces and ideas fresh.”

Those in attendance said that the forum helped them get a clearer sense of the candidates.

“I liked Marc (Thielman), Bridget (Barton) and Kerry (McQuisten),” said Lois Goering of Corvallis. “I thought they did very well. Marc could really do a wonderful job with the education issues we’re facing. Kerry is somebody who really understands small businesses and rural areas.”

“There were probably a couple who stood out to me,” said Paul Hernandez, another attendee. “Marc and Paul (Romero), but I also liked Kerry. They were upfront and direct with their answers.”

Two of the questions from the audience focused on fears surrounding voter fraud during the last general election. The very first question posed to the candidates was about how they would ensure secure, honest voting. The second question asked, in part, if candidates believed Donald Trump won the 2020 election.

Nearly every candidate backed the idea that the 2020 election, and even all of Oregon’s vote by mail elections of the last 25 years, was fraudulent. Only Pierce said he “had to trust the election.” McQuisten said that she believed Trump had won, but “we can’t prove it.”

To date, no coordinated voter fraud efforts have been uncovered pertaining to the 2020 general election. Independent and even Republican-led audits of statewide elections systems, like the one recently completed in Arizona, have not uncovered data indicating an errant conclusion in the presidential election.

Other questions from the audience included concerns over the power sector, illegal immigration, abortion, critical race theory in schools and how to deregulate business in Oregon.

What the candidates said

• Pierce used his opening remarks to talk about what he learned during his last race for governor in 2016. He also talked about the way losing his wife, Selma Moon Pierce, last November reshaped his perspective and turned him more toward his faith. “Once the primary is over, rally around the person who wins, because I can assure you, any of the group up here is far superior to what the other side is able to offer us, and to lead us to that Promised Land."

• Fosdick, 33, mentioned his service in the Army National Guard, serving in Iraq in 2009 and 2010. He also said he wanted to get more young people involved in politics. “I want to bring my name in there and do something and see if other people my age are actually interested in doing something other than picking their nose. One of the things I really want to focus on is that everything we do going forward affects every single Oregonian.”

• Pulliam used his time to ask how many people in the room had considered moving away from their home state of Oregon in the last couple of years. Many hands shot up, to which he said, “This is the reaction I get everywhere I speak. … The hands go up. Those are the stakes. We’re trying to do something that hasn’t been done in over 40 years as Republicans, and that’s get one of us in the governor’s office. We’ve got to do it right.”

• Gomez focused on her business experience, running a microchip manufacturing business in Southern Oregon: “There's a real anti-business sentiment in Oregon right now, and it’s hurting us. In my life I’ve gone from a homeless teenager to the CEO of a successful tech company, so I know what it takes to be successful and I know what it’s going to take to get this state back on track.”

• Thielman pointed to his experience running the Alsea School District, especially his effort to keep schools open throughout the pandemic. “I’m the guy who kept the school open. More than just saying, ‘We’re going to fight to reopen schools,’ I actually reopened them.”

• Barton touted her more than 30 years of experience as a conservative political consultant, particularly her work in the 1990s to pass a law that allows charter schools in Oregon. “We can’t lose sight of how important it is, the messages and the history we instill in our children. … We have a catastrophic loss of learning in these children.”

• Romero focused largely on his efforts to highlight election fraud, particularly as it pertains to his unsuccessful bid for the U.S. Senate last year. He called it successful, though provided few specifics: “Last July, I was told that I lost the U.S. Senate primary with just over 30% of the vote. … The kicker was that in November, we found out from some other entities that I actually won that race with just over 60% of that vote. … Since the night of that election, we’ve been investigating all kinds of voter fraud here in Oregon.”

• Kerry McQuisten highlighted her efforts to fight pandemic mandates which closed small businesses and enforced mask-wearing. Her efforts to get a resolution overturning the mandates even garnered statewide and national attention to Baker City. “(City Hall) phone lines were overwhelmed, we couldn’t keep up with the calls. … People from all across the state started asking if I could run for governor.”

A congressional committee investigating the Jan. 6 Capitol insurrection moved aggressively against close Trump adviser Steve Bannon on Thursday. For more got to page A8.

Making sense of mask rules: Important things to know about the new guidance

People are still plenty confused and frustrated about the new mask guidelines handed down last week by the Oregon Health Authority. While the …

The Oregon Health Authority reported a record-breaking 82 COVID-19 related deaths in Tuesday’s report. This is the highest number reported in …

Fay Sallee of Lebanon and her husband Sherman were inducted into the National 4-H Hall of Fame on Thursday, Oct. 14 for their lifetime achieve…

Amid a pandemic that has left over 4.9 million people dead worldwide, dozens of nations are taking time out Thursday to prepare for another ma…

Oregon gubernatorial candidate Jessica Gomez will be speaking in Albany on Wednesday morning, Nov. 17 as part of the Linn County Republican Wo…

Paul Romero answers questions during a forum for eight GOP candidates for governor held Wednesday evening at the Corvallis Elks Club by the Benton County Republican Party. Romero focused largely on his efforts to highlight election fraud in his opening remarks.

John Fosdick III, who served in Iraq in 2009 and 2010, said he wants more young people to get involved in politics. Fosdick is 33.

Stan Pulliam talks with audience members before the start of a forum for eight GOP candidates for governor Wednesday evening at the Corvallis Elks Club.