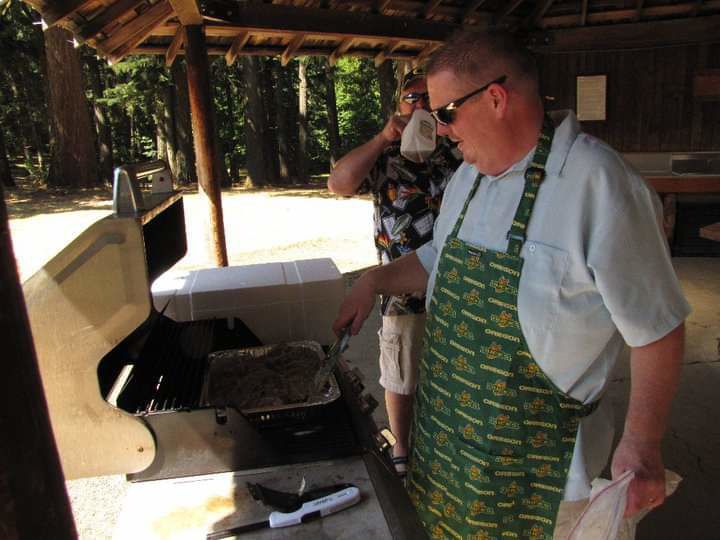 Randy Peterson enjoyed cooking for events hosted by the Southside Church of Christ. Peterson, the manager of the Lebanon Soup Kitchen, died May 12 at the age of 51. 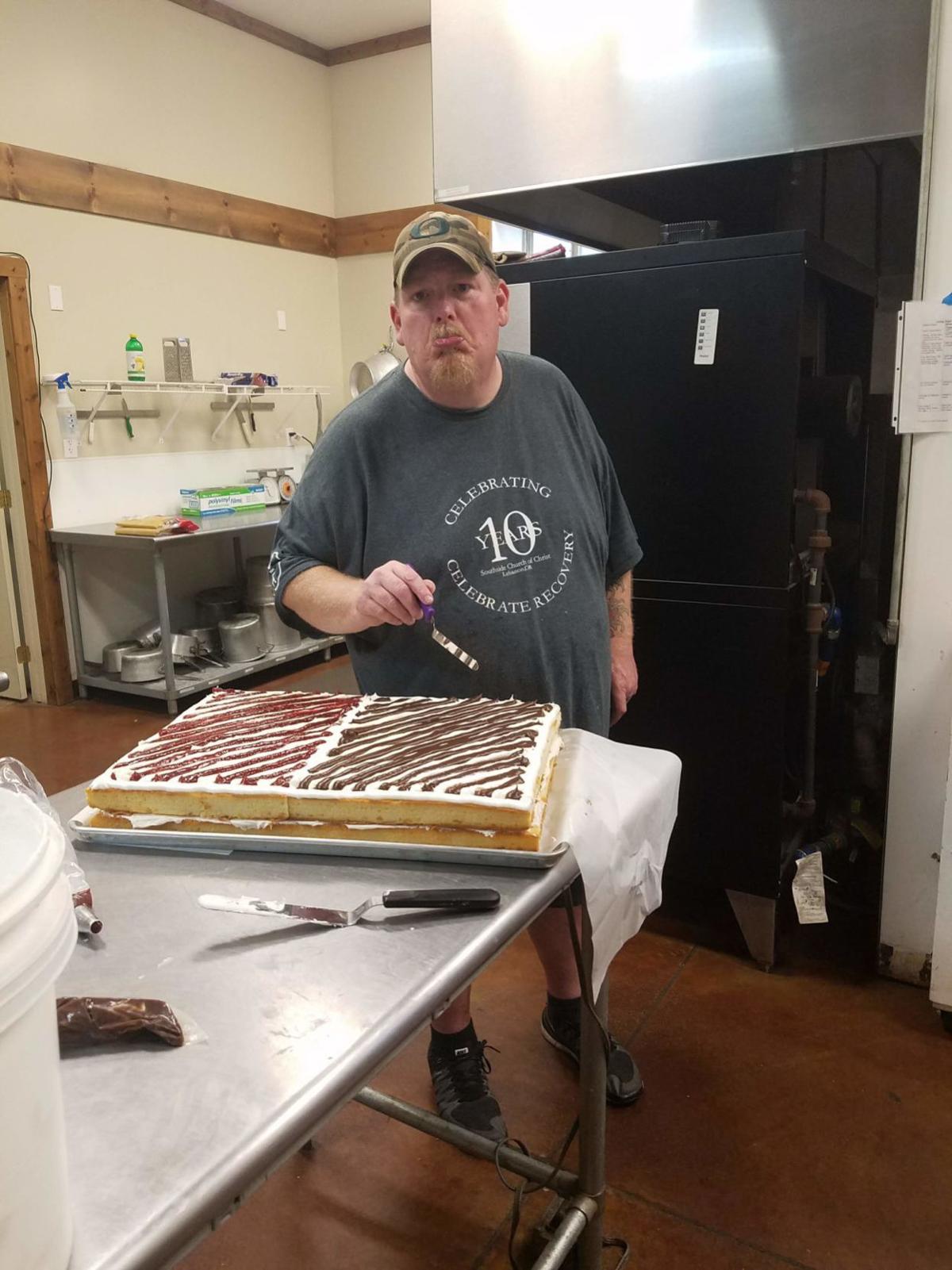 Randy Peterson decorates a cake at the Lebanon Soup Kitchen. 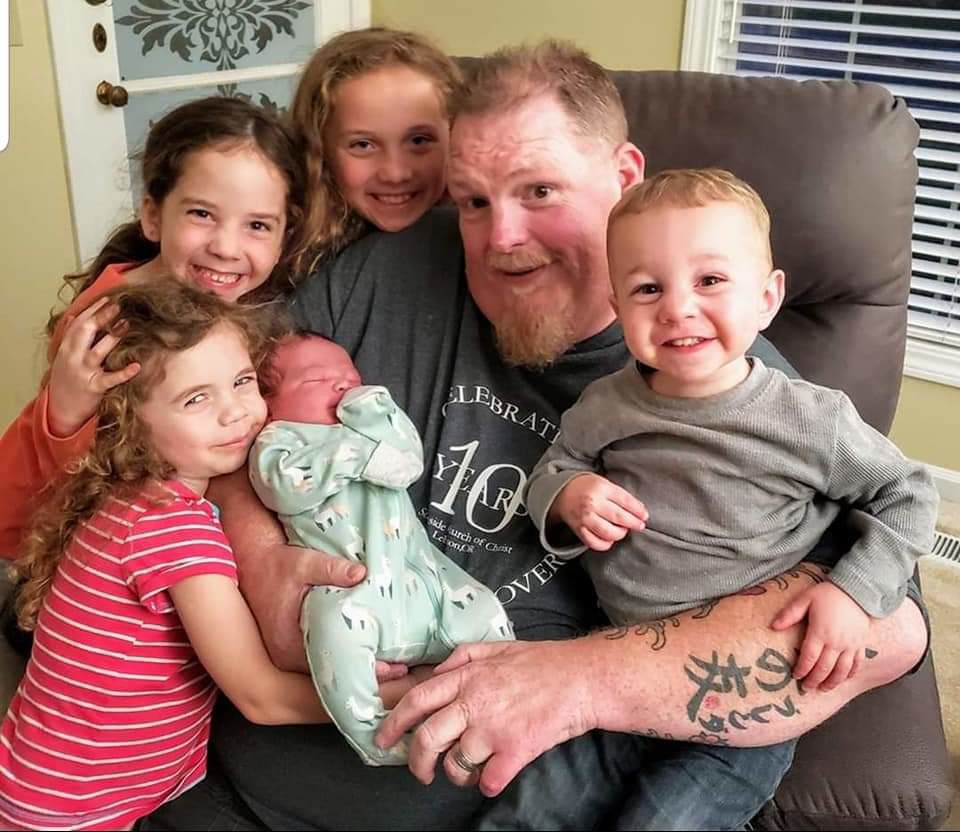 Peterson with grandchildren Adelynn, 8, (top), Maggie, 5, Eliza, 4, (bottom left), Lucas, 2, and Samuel, who was six months old at the time the photo was taken.

When Randy Peterson became the manager of the Lebanon Soup Kitchen last July, it was a perfect match.

Peterson had spent 29 years working for Fred Meyer, starting out as a bag boy and working his way up to serve as a manager and trainer for the company. His knowledge of the industry allowed him to grow the community support for the kitchen.

Knowing that he was in the right place in his life makes the events of the past week all the more devastating. Peterson died unexpectedly on Tuesday, May 12, after suffering a cardiac event. He was 51.

Mike Baker, a board member for the Lebanon Soup Kitchen, said Peterson had an enormous impact on the organization in the short period of time he served.

“Randy felt a real calling to this job. He actually contacted me before we had a position open or announced,” Baker said. “He was the rare person at his age who said ‘I’m going to do something different. I’ve been working straight for a long time.’ Even though it was a significant pay difference and hours difference, he felt that was where God wanted him.”

Peterson started volunteering at the soup kitchen last spring and was there every day the doors were open, Baker said.

When the manager position opened up, Peterson already had a good grasp of the job. After a short period of training from longtime kitchen volunteer KJ Ullfers, Peterson was ready to lead.

“Randy was off and running. He was such a networking person. He knew how to make the connections with all the players. He didn’t ruffle feathers. He just made people excited to be there,” Baker said.

The Lebanon Soup Kitchen has operated at the First Christian Church for 31 years. Pastor Zane Ridings said Peterson was the ideal person to take on this complex role.

“Randy’s background not only in grocery and also in human resources, had him set up. You’re primarily a volunteer coordinator, a manager and a community outreach specialist all rolled into one. He had been making huge strides in that community outreach aspect," Ridings said.

But perhaps even more important than Peterson’s experience was his personality.

“We needed somebody with a really calm demeanor, calm, kind, loving demeanor. That was absolutely Randy. You need all of those with an appropriate balance of firmness,” Ridings said. “He had all of that.”

Charise Blodgett, Peterson’s daughter, said the work at the soup kitchen was a continuation of what he had always loved.

Blodgett recalled how he would make special birthday cakes for family members and that led him to start a small cake decorating business.

“He just loved to serve. He wanted to make sure that everybody was happy. He really enjoyed cooking and baking and that was his real passion. That’s what he did for everybody,” Blodgett said.

Peterson grew up in Gilchrist. He later lived in Oakridge and Eugene before moving to Lebanon in 2010 to be nearer to his daughter and grandchildren.

Around this time, he also reconnected with his former high school girlfriend and they got married, said Kelly Blodgett, Charise’s husband.

“They were high school sweethearts. Went off, lived their own lives for 20 years and then they reconnected about 11 years ago,” Kelly Blodgett said.

In the past two or three years, Peterson developed a closer relationship with Southside Church of Christ, Charise Blodgett said. He volunteered to help out with child care and helped cook for many church events.

She said the work at the Lebanon Soup Kitchen was very important to him.

“The people at the soup kitchen, he knew their lives. It wasn’t just seeing them Monday, Wednesday, Friday. If they needed a bed, he was on a search,” Charise Blodgett said.

“It was really incredible to watch his growth in the ministry at Southside, especially the last two years,” Gosser said. “When the opportunity at the soup kitchen came along, it was perfect timing for him in his personal growth … It seemed like all of the things he’s gone through in his life prepared him for that moment.”

Baker said Peterson was up to the challenge of continuing the soup kitchen’s work during the COVID-19 outbreak. Peterson had already made the decision to close the dining room and start offering takeout before the state made this mandatory.

“Randy really felt there was too much risk. We already moved to just serving takeout,” Baker said. “That just comes with being a good manager, having good foresight.”

The soup kitchen also expanded its services in recent months. In addition to offering meals on Monday, Wednesday and Friday, it also began providing sack lunches on Tuesday and Saturday.

“Randy knew there were more people out of work or working reduced hours,” Baker said.

The number of people seeking assistance also increased. Maximum meal attendance has increased from 120 to as high as 140, Baker said.

The Lebanon Soup Kitchen did receive some good news this spring. It was one of four Lebanon organizations to receive a significant donation from the Portland-based Heatherington Foundation for Innovation and Education in Health Care.

The Lebanon Soup Kitchen received a $20,000 grant, which Baker said the organization received last month. Baker said this gift provides security for the soup kitchen at a time when needs are rising and traditional fundraisers are difficult to host.

“At a time where things are really unsure, that was a wonderful gift to know we are not strapped for resources right now,” Baker said.

When the organization receives a large gift, it allocates some portion to making a long-term investment. Baker said a gift a couple of years ago allowed the soup kitchen to purchase a large walk-in cooler, which made operations much easier for the staff.

Peterson would have been deeply involved in making this type of decision moving forward and his absence will be felt.

Baker said he is always concerned about those who are helping out at the soup kitchen. He wants to make sure they are not feeling burned out or overwhelmed by the demands of the job.

He said that when he would ask Randy how he was feeling, he always got the same answer.

“‘Mike, I’m having the time of my life. I was born for this,’ He would say that every time,” Baker said. “The tragic thing is that it just wasn’t long enough."

Albany's Perkins gets shot at Merkley for U.S. Senate seat

For the first-time, Albany’s Jo Rae Perkins has made it to the general election.

Albany man pleads to assault for stabbing mother in hand

Starting Sunday, those traveling to and from Lebanon along Highway 20 will encounter single-lane closures and intermittent delays.

Biscuits and Gravy, a two-faced kitten, died on Saturday night, nearly four days after being born on a farm east of Albany.

Oregon has to prepare for a possible second spike of COVID-19 in the fall, fight wildfires while not spreading the infection to crews, and do …

Randy Peterson enjoyed cooking for events hosted by the Southside Church of Christ. Peterson, the manager of the Lebanon Soup Kitchen, died May 12 at the age of 51.

Randy Peterson decorates a cake at the Lebanon Soup Kitchen.

Peterson with grandchildren Adelynn, 8, (top), Maggie, 5, Eliza, 4, (bottom left), Lucas, 2, and Samuel, who was six months old at the time the photo was taken.