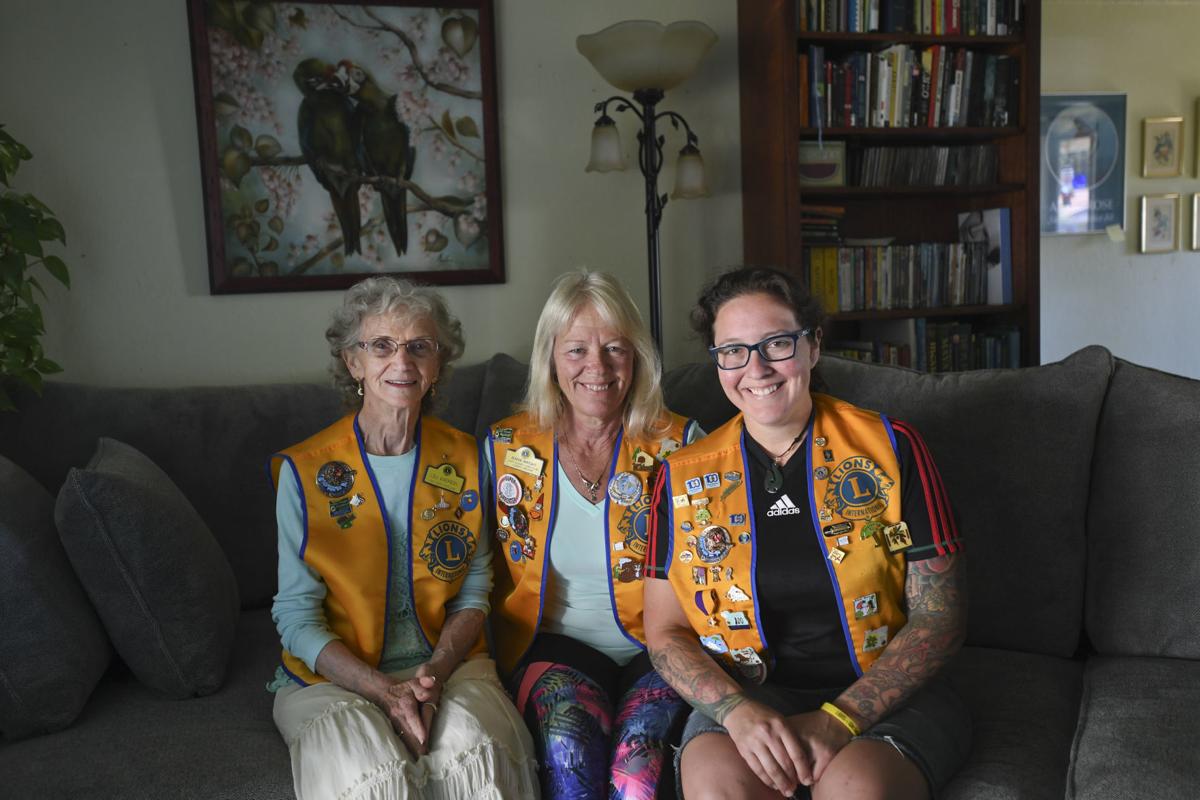 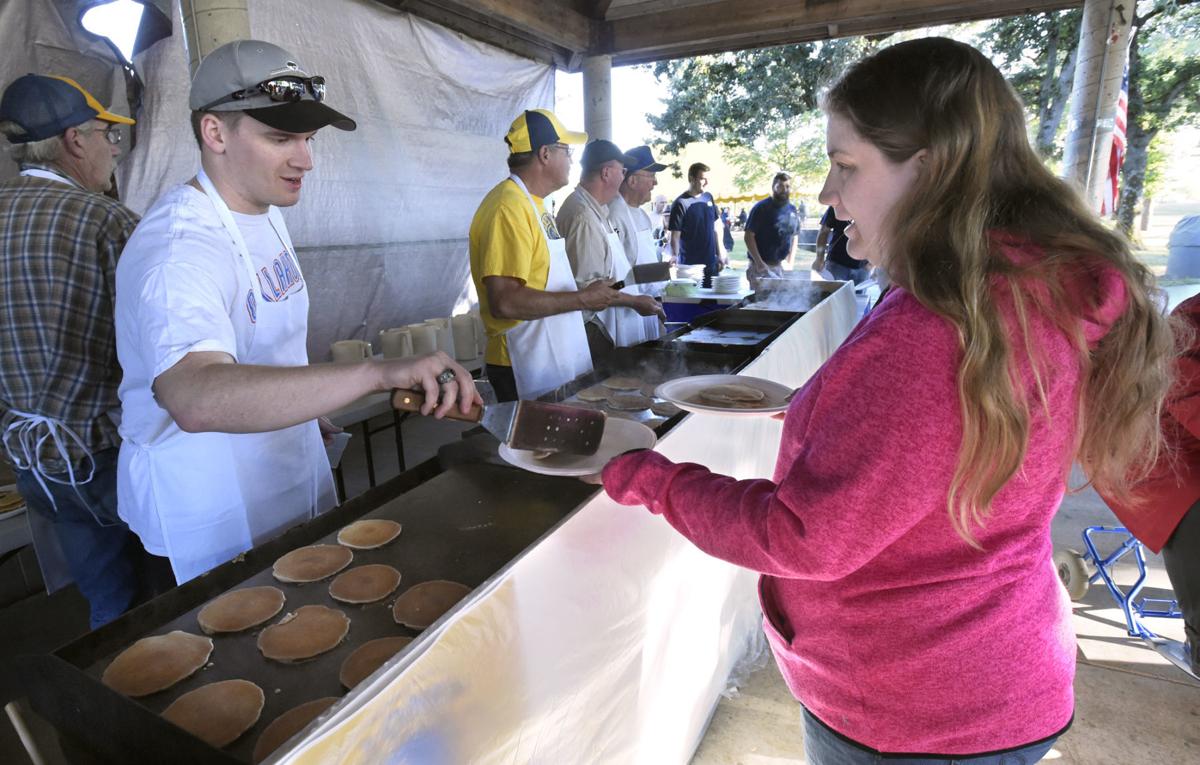 People who come to the annual East Albany Lions Club Lumberjack Breakfast often say the event feels like a family reunion. But for certain club members, it's the real thing.

The community service club boasts two families of three generations each, all of whom come together each year to serve pancakes, eggs and sausage to thousands of their friends and neighbors at Timber-Linn Memorial Park.

Sometimes the club members have to work around life details to make their family connection happen. Grant Boehme, for instance, whose father, Jerry Boehme, and grandfather, Jack Haines, are also East Albany Lions, has to fly in from Texas from his job as an Air Force pilot instructor.

And Jeanie Wright, whose mother, Lou Amerson, and daughter, Jadie De Lille, are both Lions, is going to miss this year entirely because she's on her way to Montana to meet her first granddaughter.

But all three generations in both families say they treasure the chance to serve their community together, especially each year around what becomes, in effect, a community breakfast table.

“For me it’s a lot about Grandpa and his friends," Grant said. "Growing up around them, at the breakfast or other times during the year when I saw them — a lot of them are Lions as well. I very much was motivated by them to join and to give back."

Because the Fourth of July falls on a Wednesday this year, hungry visitors get an extra day to chow down; the Lions will have the first flapjacks ready at 6 a.m. this Saturday at Timber-Linn Memorial Park.

The breakfast is the club's biggest fundraiser, and proceeds from every ticket purchased is used for service, said Jack Haines, Grant's grandfather. The Lions cover the costs of the food and supplies themselves, so that everything can go back to the community.

Haines joined the East Albany Lions Club in 1957, shortly after the breakfast itself began.

"When I was a young man, my boss asked me to go to a meeting with him. And it was the Lions," he said. "Before it was over with, why, he convinced me that was the thing to do. And I’m glad I did."

Haines said he started with the club because he enjoyed the company. He still does, but he also stays because he believes in its mission. "Lions: We Serve."

At age 88, he said, it's harder to be a part of some of the club's community service projects, such as the highway cleanups. But most of the time, he said, “I’m a part of everything that the Lions is. If I can do it, I’ll be there.”

Jadie De Lille feels the same way. She'll turn 30 next month and will become the youngest president of the club in recent memory. But that's not unexpected, given her reputation, which is to say yes to any project she is asked to take on.

De Lille proved that early on by saying yes to the coffee job at the annual breakfast four years ago, her first year with the club.

"I'd get up at 4, 4:15, get here at 5, start the coffee," she said. Then she'd work a breakfast shift, stay for a security shift, then head to her restaurant job in Lebanon, which started at 4 p.m. She'd work till close, go home to bed, then get up and do it again.

"She always says yes, and does it," said mom Jeanie Wright. "People are impressed that she's always willing to get up and do it."

De Lille became involved with Lions because her grandmother, Lou Amerson, had belonged to various Lions clubs since 1994.

Amerson joined after taking a new job in Baker City, looking for a way to meet people and get involved in the community. She belonged to clubs in Springfield and Philomath before joining East Albany in 2012 — the Albany club was slower than the others in allowing women to become members.

She's now Tail Twister for the East Albany club, which means it's her job to raise club funds by catching out Lions for minor transgressions during meetings — or to give them an opportunity to brag about something good in their lives. (She collects the donations in a hospital-green urinal attached to a bike horn, which she honks for effect.)

Amerson took De Lille to a district convention in Corvallis a few years ago and she joined on the spot.

A couple of years later, Wright decided to join, too. "Because we were having so much fun," Amerson explained.

Added De Lille with a nod: "She was jealous."

Wright laughed at that. "I really got to see how important it is by watching what Mom did for so long and seeing Jadie's enthusiasm," she said. "I was the missing link."

Now, Wright chairs the club's peace poster contest, which is open to students in middle school, and works on recruiting new club members. She's especially committed to bringing in more families like hers and the Boehme/Haines family.

"I'm going to issue a challenge: Who can have the most in a family?" she said.

Family influence makes a difference, said Jerry Boehme, Grant's father. He joined the East Albany Lions Club in the mid-1980s after marrying Haines' daughter, Sue, and getting to know the club through him.

He stays because he believes in the services the club provides. "It's a great platform to be able to give back."

Independence Day falls on a Wednesday this year, which means an extra day to enjoy pancakes, eggs at sausage at the East Albany Lions Club Lumberjack Breakfast.

Breakfast will be served from 6 to 11 a.m. Saturday, June 30, through Wednesday, July 4, at Timber-Linn Memorial Park. Cost is $8 for adults or $6 for children under 12. The all-you-can-eat meal features pancakes, eggs and sausage, and milk or coffee.

The breakfast has been an Albany staple since 1957 and is the biggest fundraiser the East Albany Lions Club puts on each year. Proceeds go to Lions sight and hearing efforts, local charities and community projects.

Hundreds of hungry visitors lined up Saturday morning at Timber-Linn Memorial Park, as they have since 1957, to have their plates filled with …

Hundreds of hungry visitors have their plates filled with pancakes, sausage and eggs at the East Albany Lions Club Lumberjack Breakfast, which…

Lumberjack Breakfast, an Albany tradition, starts on the Fourth of July this year

Albany's Lumberjack Breakfast has record day on the Fourth of July