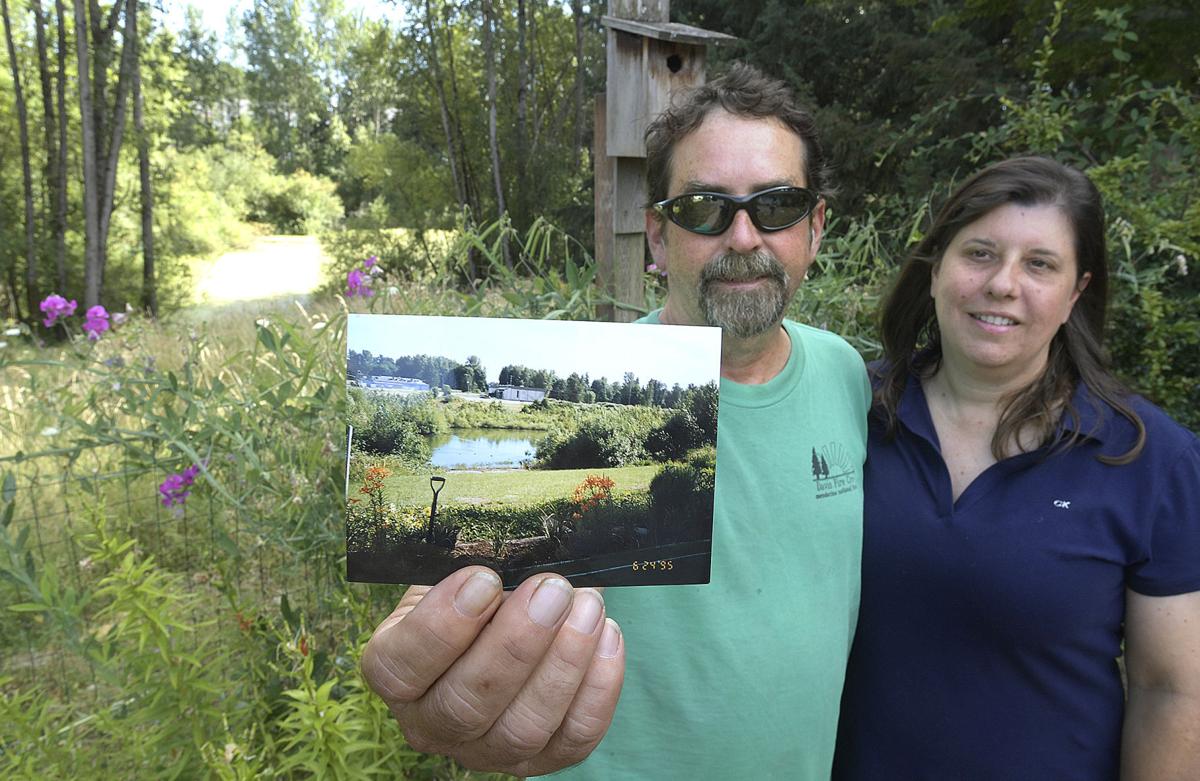 Todd and Lisa Thompson show a photo of the property taken by the Cutsforth family from the same location 25 years ago. 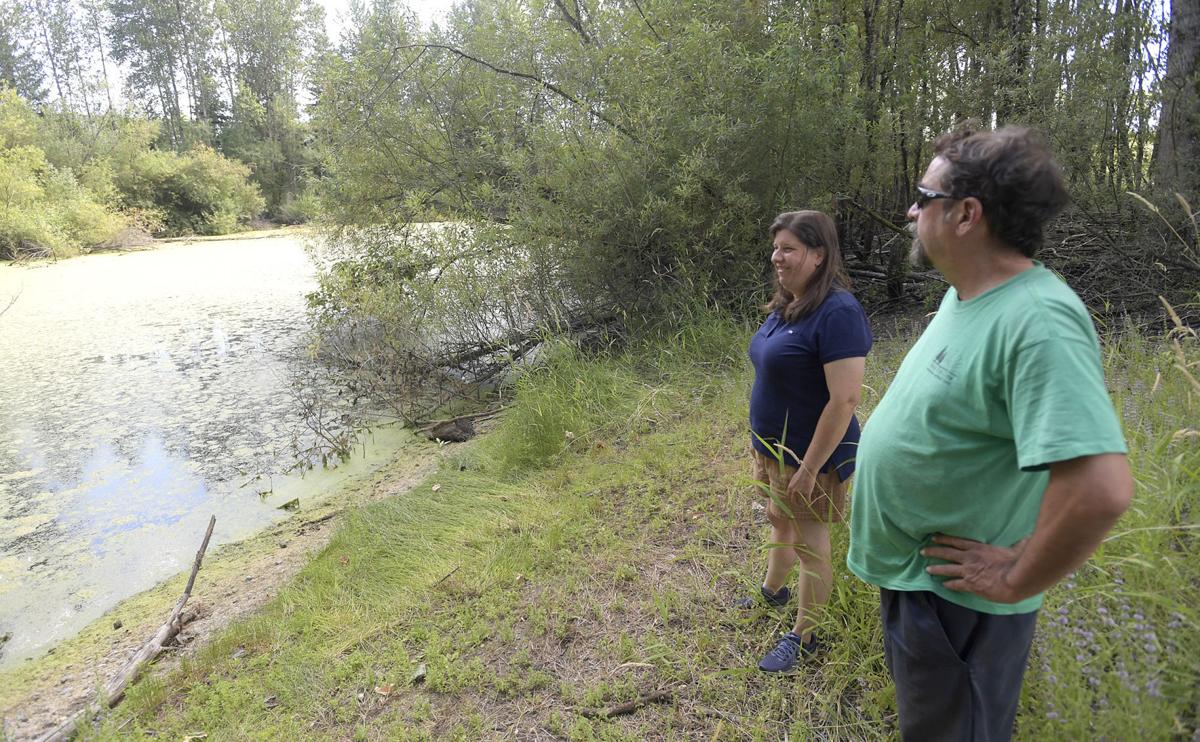 Todd and Lisa Thompson look at the pond behind their home that they agreed to buy from the city of Albany. The body of water is surrounded by trees, many of which were planted by the previous owners of their property. 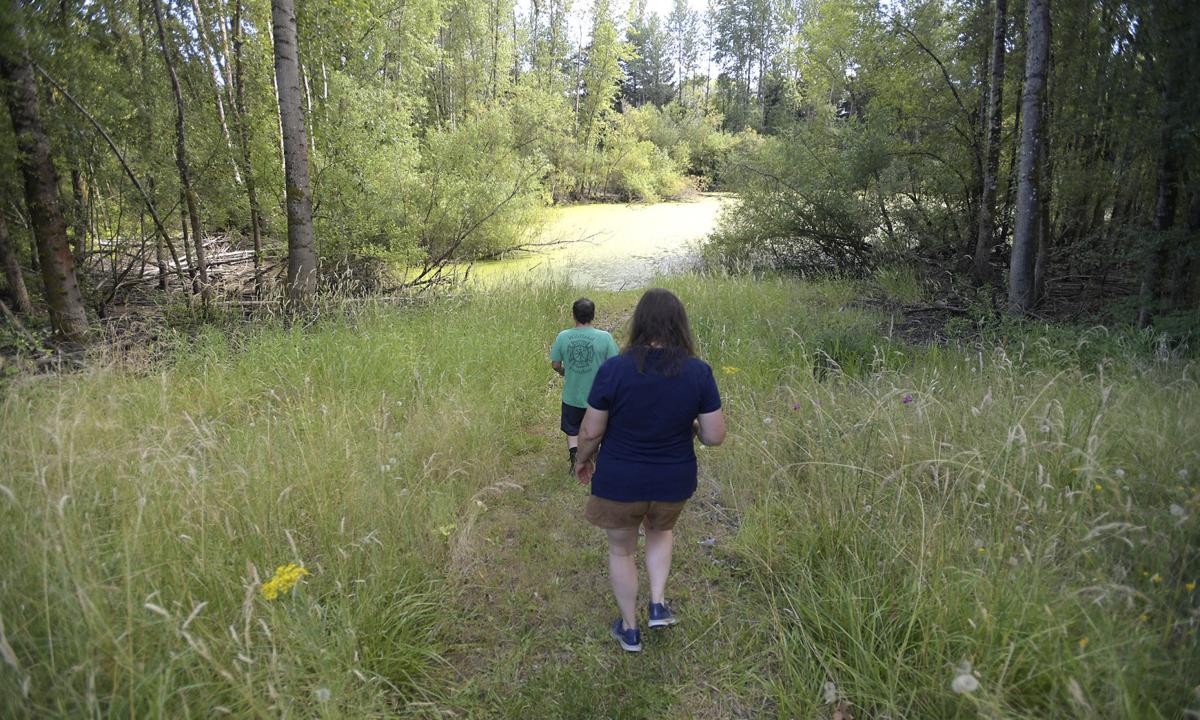 A path from the Thompson's home leads to the pond in between cottonwoods and fir trees. The couple has seen native frogs, birds and deer on the land.

After the developers left, the property behind Lee and Sue Cutsforth's home on Northwest Ridders Lane was bare and bleak, scraped down to a hollow to provide fill dirt to lift North Pointe homes out of the flood plain.

From their back yard, the North Albany couple could see all the way to the businesses across Hickory Street — and that wasn't really the view they had in mind.

The Cutsforths gathered cones from the Douglas fir trees in her yard, watered them and kept them in Lee's mothers greenhouse until they sprouted trees big enough to plant. When the area dried out, the Cutsforths carried buckets of water to the saplings to keep them growing. They also planted flowers and spread hay to encourage deer to rest there.

It took from 1995 to the present, but today, you wouldn't know the 4.2-acre parcel had ever known a backhoe. The 50-some firs the Cutsforths planted are tall and thick. A grove of 50-foot cottonwood trees stands sentinel near the bank of a wide pond, thick with bright green algae. The air is heavy with the minty scent of pennyroyal.

And the new owners of the Cutsforth home, Todd and Lisa Thompson, are determined to keep it that way.

The Thompsons moved to North Albany from Virginia in September 2020. As they were closing on the Ridders Lane home, their real estate agent mentioned the parcel behind them was for sale.

The North Pointe developers had given the land to the city, which had declared it surplus. One idea had been to make it a park, but that hadn't happened and didn't look likely, given the lack of access and the steep banks on the south and east sides of the pond.

The site isn't easily developable. It would need public access and its excavated dirt would have to be filled back in to get it above the 100-year floodplain. But the Thompsons couldn't help thinking about someone coming along and deciding to try anyway.

They were a little worried about taking it on themselves, however. That would mean a mortgage to come up with a purchase price, and potential liability for the "attractive nuisance" of the steep-sided pond.

However, "We've grown fond of the ducks and the birds and the frogs, especially," Todd said. "We were afraid a developer would want to buy it and fill the pond back up."

"I think every community needs green space," Lisa said. "We've got to preserve the ecosystem."

So after a great deal of thought and research — "We were hoping someone would outbid us," Todd said — the couple offered to pay the City of Albany $77,500 to purchase the land.

They also agreed to toss in another $100 for a conservation easement as a part of the sale, which keeps the land wild even if they sell it sometime in the future.

Councilors took up the proposal at their July 14 meeting. Councilor Bessie Johnson said she felt the offered price wasn't enough, and voted no, but other councilors said they liked the idea of preserving the parcel for wildlife and agreed to the sale.

"I'm all in favor of keeping this little wild spot for wildlife and a place where perhaps the people in the neighborhood can enjoy some free space from the heavy-duty traffic," Councilor Dick Olsen said.

Sue Cutsforth said she and her husband, who moved a few miles away from the Ridders address, rented their house for a while before selling it to the Thompsons. She's delighted at their decision.

"That's what we intended all along," said Cutsforth, who said she and Lee tried to purchase the property themselves but "timing was not on our side."

Living on Ridders, the couple didn't like the sight of the bare pit outside their back yard. They had moved to the property in 1995, and the 1996 floods filled the pit with water from the Willamette. The Cutsforths had to park their car at the nearby golf course to keep it safe, Sue remembered.

The floodwater carried with it frogs, fish and turtles. The cottonwoods seeded themselves, but much of the other vegetation came from the Cutsforths.

"Lee's mom had a greenhouse, and she would give us the little baby trees and we planted them around," Sue said. "We carried buckets and hand-watered those trees and watched them grow."

Deer and ducks, foxes and rabbits all came to call, she said. "Fawns would sleep in the grape arbors. It was like being in an unbelievable fairy tale in the city."

The Thompsons said they don't plan to disturb the property, other than removing blackberries and ivy and fallen wood to open the meadow for easier deer migration. They said they'll also likely post signs to warn potential trespassers.

Todd said they're thinking of inviting members of The Audubon Society to birdwatch at the site, and would be open to other scientific studies. But for the most part, the plan is to keep it as is for resident deer, rabbits, squirrels, ducks and other wildlife.

"It's nice. It's so peaceful. I love listening to the frogs and the ducks," Lisa said. "It's so great the way it is."

City of Albany department directors no longer have to live within the city's urban growth boundary, the Albany City Council has decided.

At a raucous special meeting Wednesday, Albany School Board voted 3-1 to terminate Superintendent Melissa Goff’s contract as of July 24 under …

Members of the Albany School Board voted Monday to immediately dispense with masks in most school district circumstances, and to open meetings…

A North Albany resident whose property is adjacent to a parcel the city wants to sell has asked to buy it to keep as a refuge for native species.

Todd and Lisa Thompson show a photo of the property taken by the Cutsforth family from the same location 25 years ago.

Todd and Lisa Thompson look at the pond behind their home that they agreed to buy from the city of Albany. The body of water is surrounded by trees, many of which were planted by the previous owners of their property.

A path from the Thompson's home leads to the pond in between cottonwoods and fir trees. The couple has seen native frogs, birds and deer on the land.