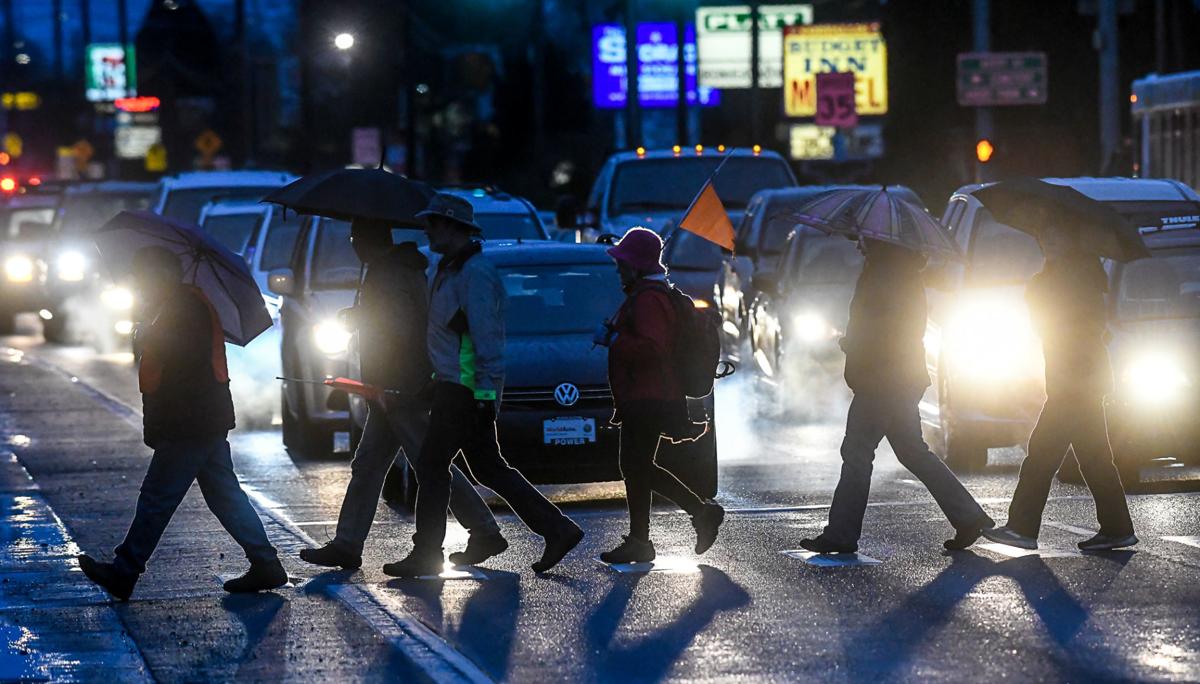 Bike and pedestrian activists held a crosswalk protest Monday morning. The protesters continually walked back and forth in the crosswalk to raise awareness of the deaths that have occurred there. 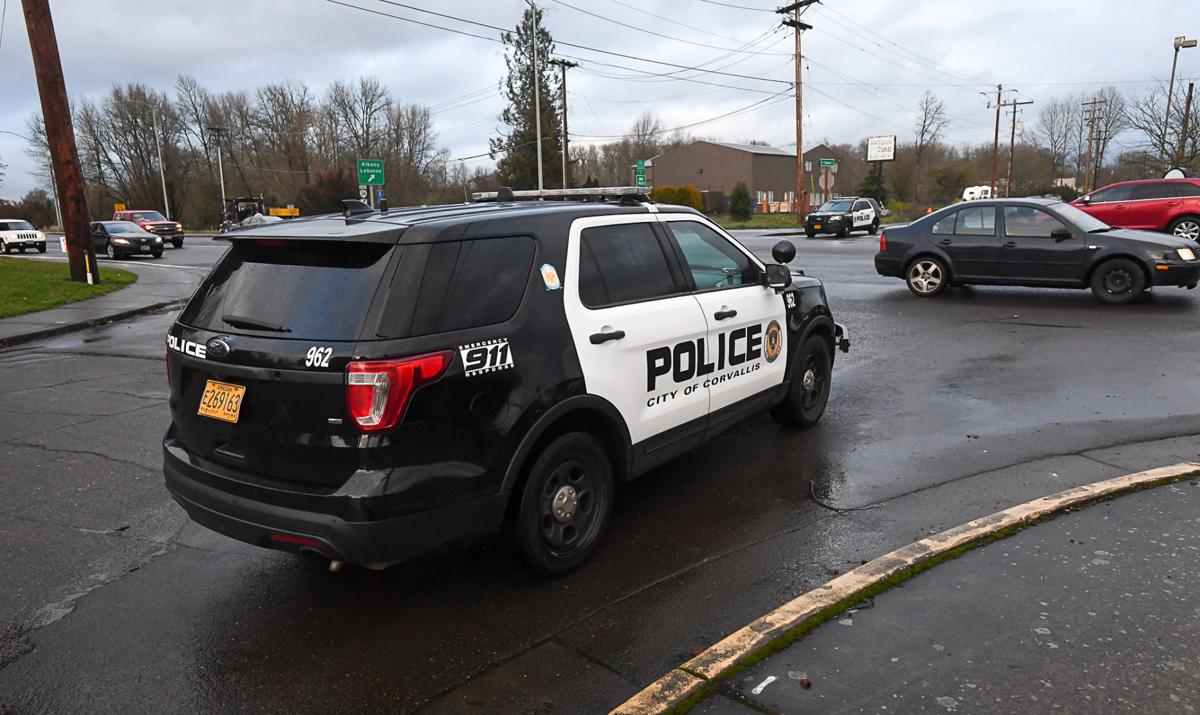 A Corvallis Police Department vehicle Friday patrols the South Corvallis area where 11-year-old pedestrian Rhiana Daniel was struck and killed. The CPD will be doing morning and evening commute patrols in the region at least through the end of this week.

“Calm, legal and safe. Cross the street at every pedestrian crosswalk and carry an umbrella," said organizer Jay Thatcher.

The walkers are fed up. Last Wednesday night 11-year-old Rihana Daniel was struck by a motorist while in the lighted crosswalk that connects Papa’s Pizza Parlor with the First Alternative Co-op. Daniel died of her injuries a day later. Peter Eschwey, 45, of Corvallis, was driving the 2015 Nissan Leaf that struck Rhiana. He is cooperating with investigators, but no charges have been filed as the inquiry continues.

Rhiana is the third cyclist or pedestrian to die on that stretch of Third Street in the past 18 months. Cyclist Eric Austin was struck by a motorist and killed in June of 2018 while riding in the same crosswalk as Daniel. And last October cyclist Jeremy Gruver was struck and killed just a few hundred feet north of the crosswalk.

The walkers are fed up because two lights are missing from the Papa’s to Co-op crosswalk, whose pedestrian island was damaged by a motorist last August.

“It has been stunning to witness how long it takes to get a repair such as this completed,” said Wendy Byrne, a member of the city’s Bicycle and Pedestrian Advisory Board. “If a red-green-yellow signal on Highway 99 or anywhere else in town had been damaged it would have been repaired almost immediately.”

The Oregon Department of Transportation, which has jurisdiction over Third Street because it is a state highway, has been planning to replace the current amber flashing lights with rectangular rapid flashing beacon lights at the Co-op/Papa’s corner and three other crosswalks on Third.

“Maintenance is the responsibility of the city,” said Corvallis City Manager Mark Shepard, “and the city has been coordinating with ODOT so that the repair of the lights would coincide with the ODOT project.”

Angela Beers Seydel, ODOT public information officer for Region 2, which includes the mid-valley, said that the work should be completed by the end of January.

In the meantime, Shepard said, the Corvallis Police Department has increased traffic patrols in the area, mainly during the morning and evening hours, and will continue them at least through the end of this week.

Also, city officials met with ODOT staff Monday, Shepard said, “to discuss other, quick response work that can be done. We are developing a plan.”

Shepard said that the Jan. 21 Corvallis City Council meeting will include an agenda item on the issue.

Councilors also learned how fed up folks are by the death of Daniel. A Thursday afternoon work session that was scheduled for a discussion of system development charges became a cathartic event when eight people came forward during the public comment period to urge to city to take action on South Corvallis safety.

Among those testifying were Thatcher, Corvallis School Board member Vince Adams and Bruce Austin, the father of the 2018 crosswalk victim. City officials and councilors described the session as bruising and at times emotional, with one community member dropping an F-bomb to emphasize a point. Some people cried. One, Ward 8 Councilor Ed Junkins, walked out during the testimony of Nancy Kiesling, who used the profanity.

“The three other speakers before her were calm, although they were clearly upset, spoke in a civilized manner and offered solutions,” Junkins said in an email exchange with the Gazette-Times. “In contrast, this other individual chose to simply shout at the council, repeatedly ignoring signals for her to discontinue. At this point I simply stood up and said that I didn’t need to be shouted at, picked up my name placard, left my council badge and walked out of the room. As I was leaving, another member of the audience shouted that I was being indifferent to the needs of South Corvallis.”

Afterward, while the meeting was still going, Junkins sent a text message to Ward 3 Councilor Hyatt Lytle, explaining that “as a pediatric emergency medicine physician, I have spent my life trying to address the incomprehensible. During these times of tragedy, it is imperative that we come together. It broke my heart.” Lytle read the text to the audience.

Junkins, a first-term councilor who also has served on the Corvallis School Board, also wrote in the email to the Gazette-Times that he is concerned about the level of hostility in Corvallis civic life.

“If I were indifferent, as I was accused, I would have never been in that room in the first place,” Junkins wrote.

Editor's note: Lytle and Ward 4's Barbara Bull both contacted the Gazette-Times after this story first appeared offering their views on Kiesling's testimony, with Bull describing her "as respectful" and Lytle noting that she apologized for the language.

Also, Kiesing and Junkins exchanged emails and both vowed to continue to work for solutions

Walking protests in the wake of the death of Rhiana Daniel in a pedestrian crosswalk in Corvallis are scheduled for 4:30 p.m. Tuesday and 5:45 p.m. Wednesday. Multiple crosswalks will be used. Interested parties can show up at Papa’s Pizza Parlor, Sharon’s Café or Richland Avenue.

Rhiana Daniel loved her family. And her friends. And God. She loved animals — except for spiders. She loved to draw, and read, and ride her bike.

Bike and pedestrian activists held a crosswalk protest Monday morning. The protesters continually walked back and forth in the crosswalk to raise awareness of the deaths that have occurred there.

A Corvallis Police Department vehicle Friday patrols the South Corvallis area where 11-year-old pedestrian Rhiana Daniel was struck and killed. The CPD will be doing morning and evening commute patrols in the region at least through the end of this week.