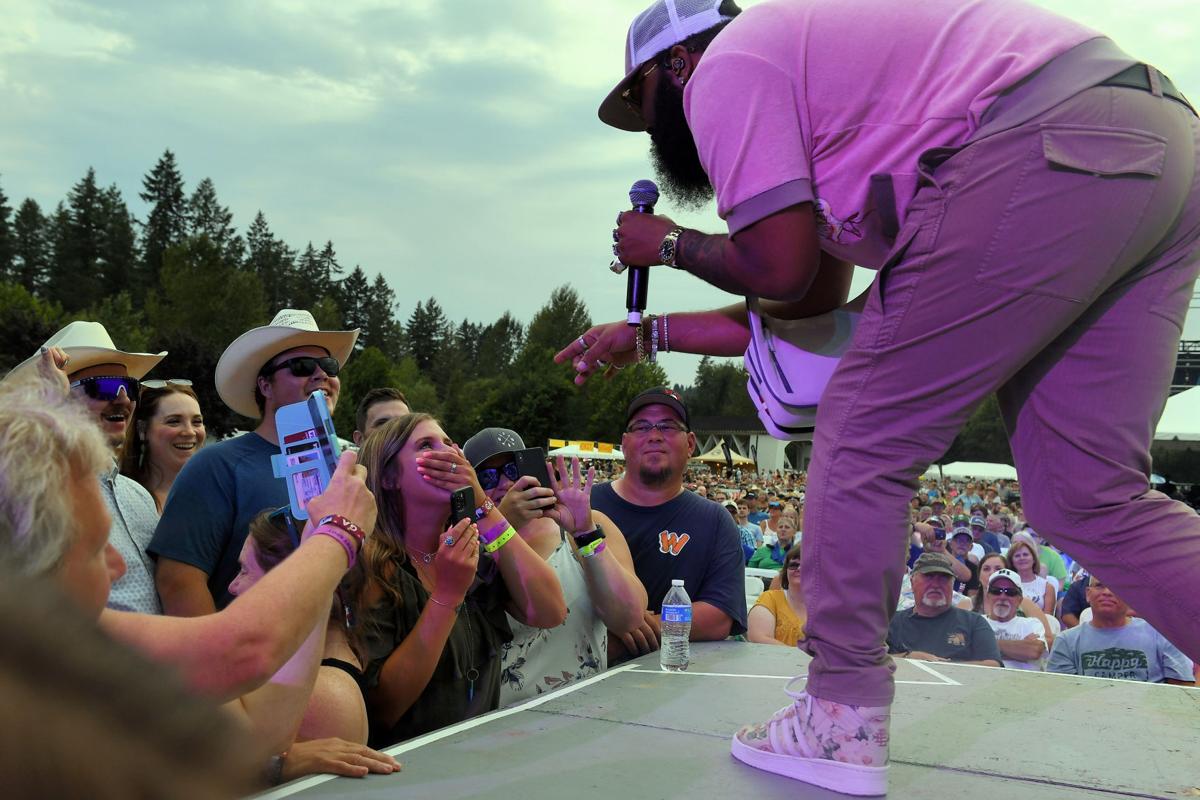 Alia Newberry is brought to tears by Blanco Brown, who was singing to her on Friday night at the Oregon Jamboree in Sweet Home. 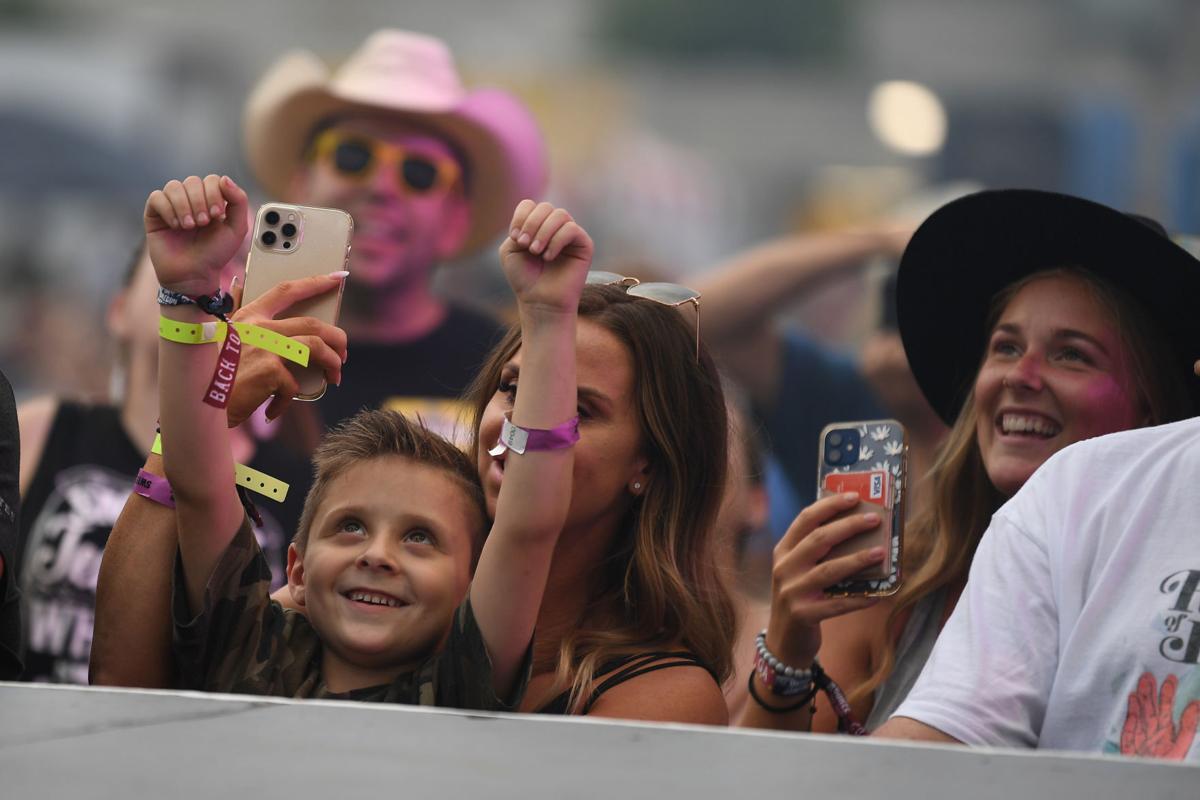 Happy fans gather near the stage Friday night on the first evening of the Oregon Jamboree in Sweet Home. 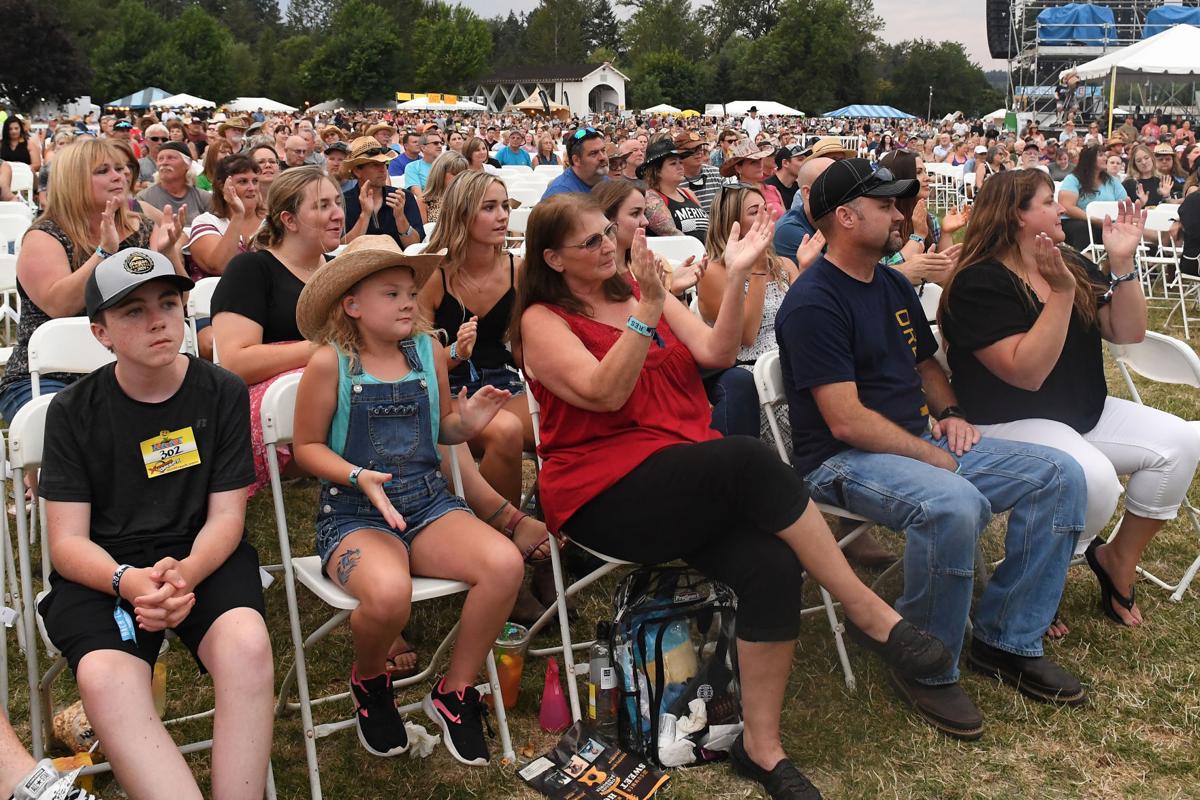 A good crowd was on hand Friday night at the Jamboree in Sweet Home. 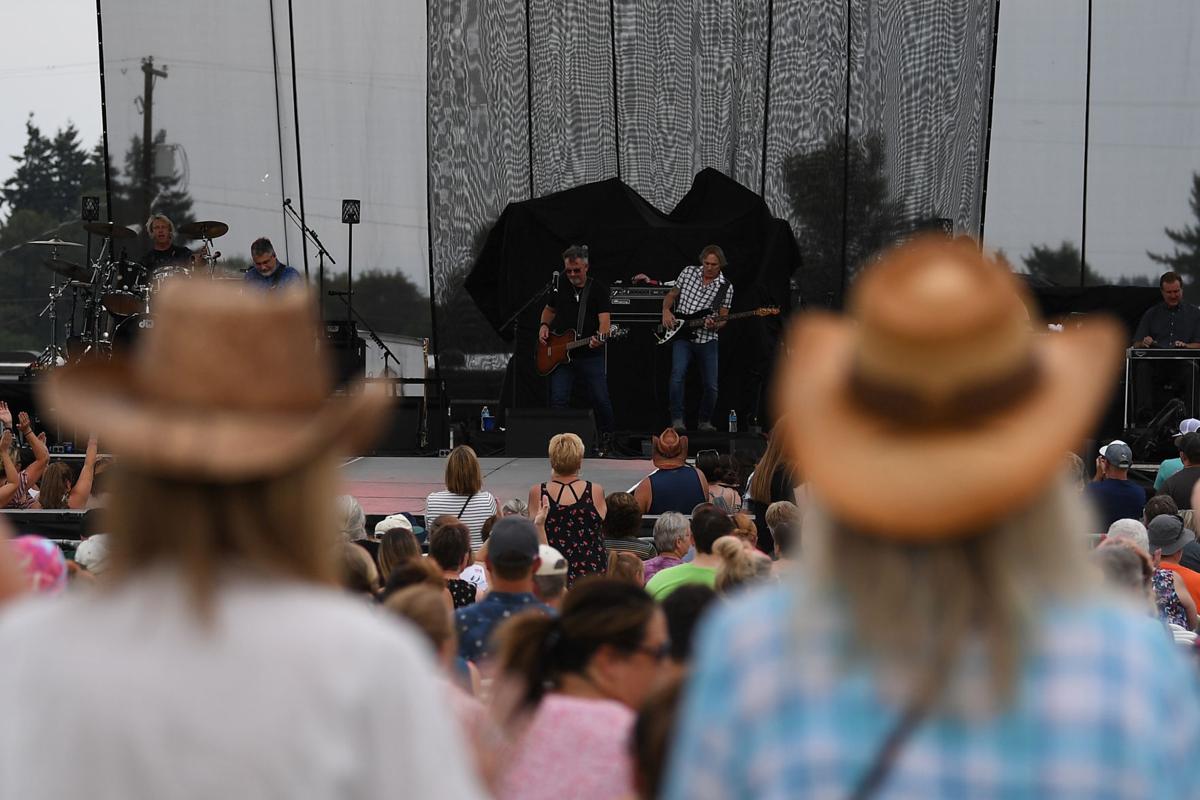 Here is a look at the action on Friday night on the first day of the Oregon Jamboree in Sweet Home.

SWEET HOME — The Willamette Valley county that has the highest risk of COVID-19 transmission, according to the Centers for Disease Control and Prevention, is also the county that held one of the biggest social gatherings happening this past weekend.

Attendees at the Oregon Jamboree in Linn County said that some of the pandemic precautions at the three-day festival made sense while others left them scratching their heads.

During the past week, data from the Oregon Health Authority shows that there were 4,931 new cases of COVID-19 reported throughout the state, the highest level in months. Of those, 207 cases were traced to Linn County. It was also reported this week that an 85-year-old Sweet Home woman was one of Oregon’s most recent deaths linked to the virus.

A CDC map shows three counties in Oregon’s most populated region that are graded as red, indicating a "high transmission risk." Linn County is one and the others are Polk and Lane counties. But the others have higher vaccination rates: 68% and 70% compared to 57% in Linn County, according to OHA’s tracker.

Those numbers likely lag behind the actual counts, however. Every other neighboring county has a “substantial” or “high” transmission risk," too. It’s this reality that prompted the Benton County Fair & Rodeo to go virtual this year, for example.

State epidemiologist Dr. Dean Sidelinger said in his last two weekly COVID advisory conferences that “nine in 10 new infections, hospitalizations and deaths continue to occur among people who are unvaccinated or not fully vaccinated.”

Both he and OHA Director Pat Allen cautioned that communities with lower vaccination rates and high transmission risk should continue to mandate masks and place tighter restrictions on social gatherings, even though the state mandates and executive orders that force those restrictions are no longer in place.

Linn County dropped virtually all restrictions on events once the announcement of Oregon’s reopening was made official on June 30. As such, the Oregon Jamboree did not cap attendance or require proof of vaccination for attendees and masks were optional.

These realities made people like Annette Foglio, of Monroe, cautious to attend the Jamboree this year. She has a form of blood cancer that’s similar to leukemia and, while she says she’s vaccinated, she’s also been advised by doctors that there is no scientific consensus on the efficacy of vaccines for people with cancer. She chose to wear a mask during the Jamboree because of this advice and was one of only two people inside the venue seen wearing one on Saturday afternoon.

The risk of transmission is much lower at outdoor events than in indoor settings, according to numerous studies cited by the CDC. It’s for this reason that CDC guidance currently doesn’t state that unvaccinated or vaccinated folks should wear masks outdoors, though it does recommend doing so in crowds of people where six-foot distancing isn't possible.

Current guidance does state, however, that everyone, regardless of vaccination status, should wear masks in indoor public settings. Despite this, Jamboree volunteers at the indoor will call offices were not seen wearing masks on Friday or Saturday.

Foglio said that the anti-mask culture of events held in towns like Sweet Home led to some tense exchanges at the Jamboree that haven’t occurred at other summer events they’ve attended, like the Great Oregon Steam-Up in Brooks, another outdoor event in July where the Foglios said many people were wearing masks.

“A guy did come up to me and say something … ‘That mask isn’t doing anything for you, Hon,’” she said, describing Friday night at the Jamboree. “There were about a dozen ruder things running through my mind I could say but I just told him, ‘I have cancer.’ He said he was sorry.”

Other attendees said that they decided not to wear a mask when they saw nobody else inside the venue doing so.

“I brought a mask the first day but … it’s Sweet Home, they don’t seem to care,” said Adeline Teague, a 16-year-old student of Lebanon High School.

Foglio and her husband, Gary, have been coming to the Oregon Jamboree for 12 years and said they didn’t want to miss out on the return of the festival this year after it was cancelled in 2020. However, they also said that the politicization of mask-wearing has made events like this less safe than the science recommends.

“There’s definitely a Republican voice here,” Foglio said. “Which is fine, I support people’s right to be whatever they want to be politically. But people aren’t following the science. Instead, it’s been so politicized. They think, ‘Oh, the government opened it back up so it’s no sweat.’”

In reality, when Gov. Kate Brown dropped statewide mandates on June 30, the new guidance said that it fell to governments at the county and city levels to implement their own mandates depending on the transmission risk and vaccination rates of their counties. Linn County, despite lagging behind other Willamette Valley counties in vaccination rates per capita, has not done this.

Despite a smaller venue size this year, the crowd of 10,000-plus attendees wasn’t capped by the Jamboree, a fact that some attendees found frustrating given the smaller layout of the concert grounds.

“You’d think with COVID they’d want to spread things out more but they instead condensed it,” said Dillin Bulman, a Sweet Home native who now lives in Washington but comes home for the Jamboree every year.

The smaller Deschutes stage used to be on the far side of the Weddle Covered Bridge from the heart of the venue and main stage. This year it was on the opposite end of the same field. Attendees said that the food and shopping vendors were more spread out in previous years, too.

It’s not as though the Jamboree took no precautions, however. It made the switch to RFID wristbands instead of physical tickets, a way to reduce the amount of money and vouchers changing hands between attendees and staffers. The wristbands, connected to concertgoers’ debit or credit cards, also acted as a cashless way to purchase food, drinks and souvenirs while inside the venue.

Vendors that would normally be set up inside the venue proper were instead moved to a lot off of Main Street called Artisan’s Alley, and along other nearby street, as a way of reducing bunches of people from gathering. Many attendees said that they weren't concerned about the COVID precautions.

Foglio, the cancer patient, said that the contactless mail delivery of the wristbands was “beautifully done,” though she mentions that the water refilling stations — where members of the public could put the mouthpieces of their water bottles right up to the spout — seemed “less than COVID-conscious” to her.

Both her and her husband stated, however, that they understand how much the Jamboree, which is a major source of fundraising for local groups and high school sports teams, must have been hurt by the cancellation last year.

“In the Jamboree’s defense, financially, it was probably not an option to cut attendance,” said Gary Foglio. “This is a nonprofit festival, so they had to have been hit hard by the cancellation last year. Hats off to them for really putting it together this year despite the short notice.”

See this story at the website for a gallery of photos from Friday night at the Jamboree.

Oregon Jamboree brings in big business… and some headaches

SWEET HOME — The Oregon Jamboree, wrapping up in Sweet Home today, brings a lot of business to the Linn County community. It also brings all t…

The Oregon Jamboree, one of the biggest country music festivals in the state, kicks off this weekend in Sweet Home. The annual three-day affai…

It was a disheartening week of steps backward in terms of COVID-19 caseloads. While deaths have decreased, caseloads have soared and hospitali…

Indoor mask mandates are back in effect after weeks of harrowing news, as both infections and hospitalization rates are at their highest level…

Alia Newberry is brought to tears by Blanco Brown, who was singing to her on Friday night at the Oregon Jamboree in Sweet Home.

Happy fans gather near the stage Friday night on the first evening of the Oregon Jamboree in Sweet Home.

A good crowd was on hand Friday night at the Jamboree in Sweet Home.

Here is a look at the action on Friday night on the first day of the Oregon Jamboree in Sweet Home.