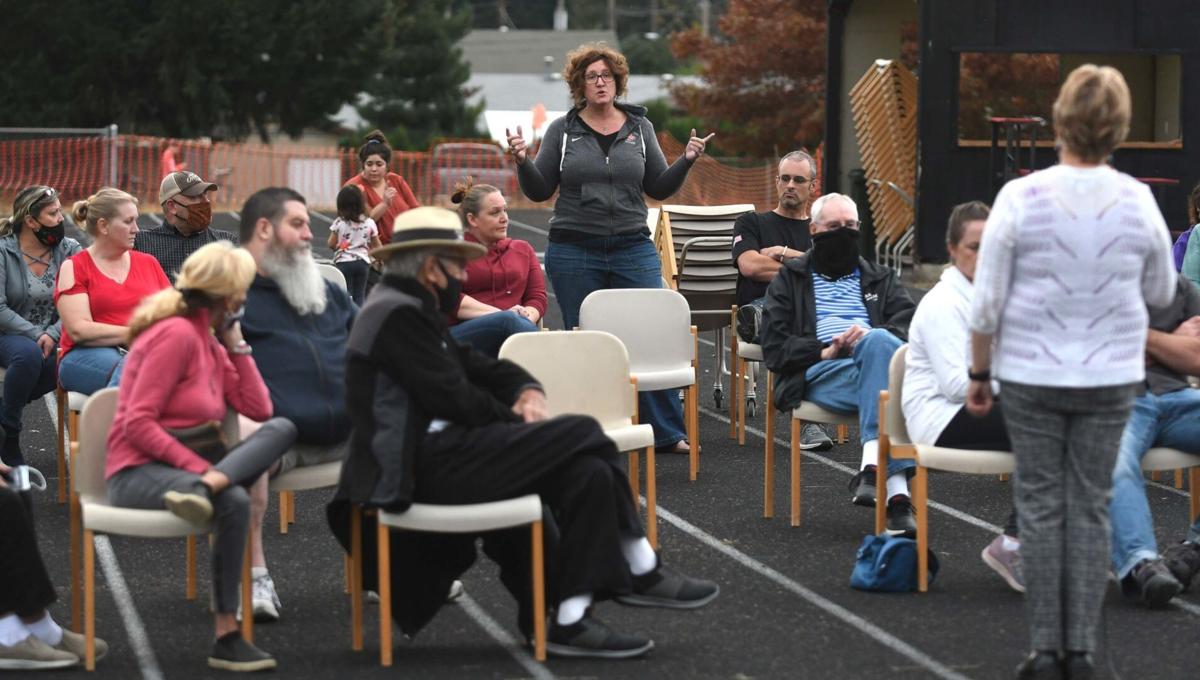 Sheila Nielsen, of Gates, shares with Rep. Sherrie Sprenger about the lack of evacuation warnings the night the fire swept through their community. 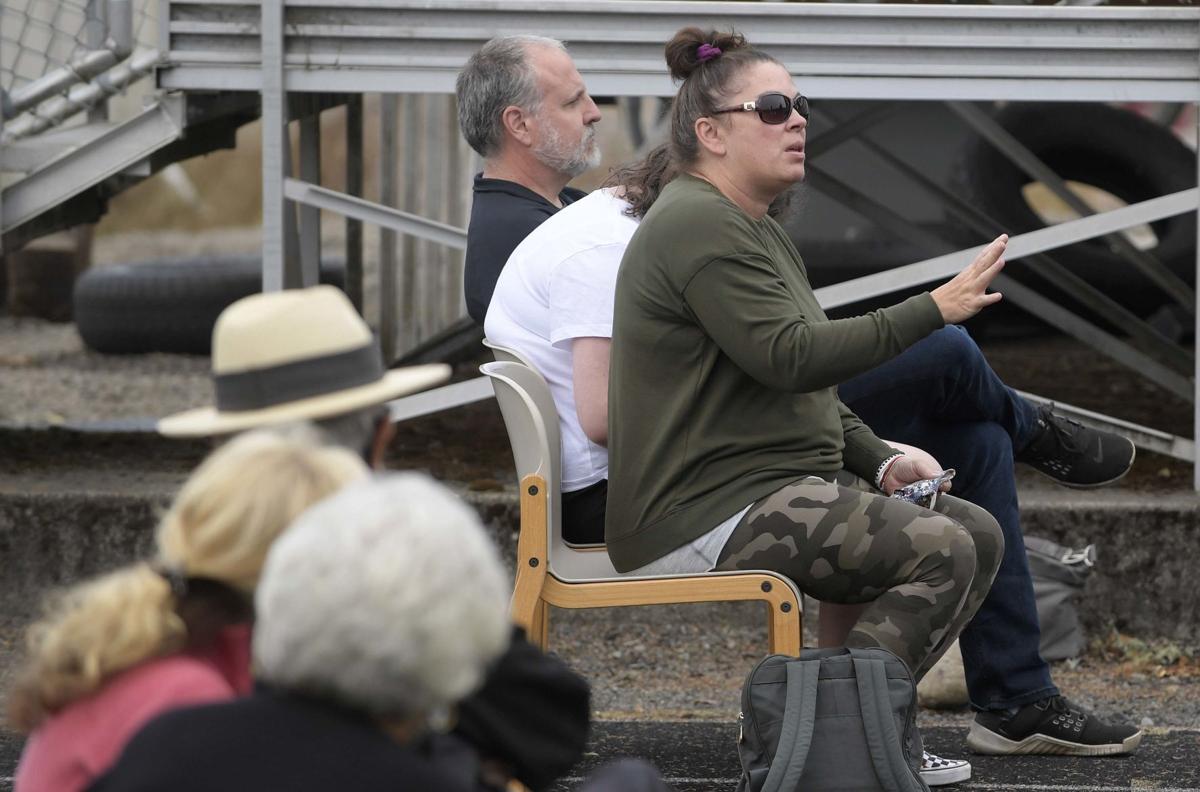 Debbie Fawcett talks about the lack of warning while seated with her husband, Jamey, and daughter, Abby. The Fawcetts lost their home in the fire.

More than 30 Santiam Canyon residents gathered at the high school football field in Mill City on Tuesday night to express their concerns during a public meeting conducted by Rep. Sherrie Sprenger. 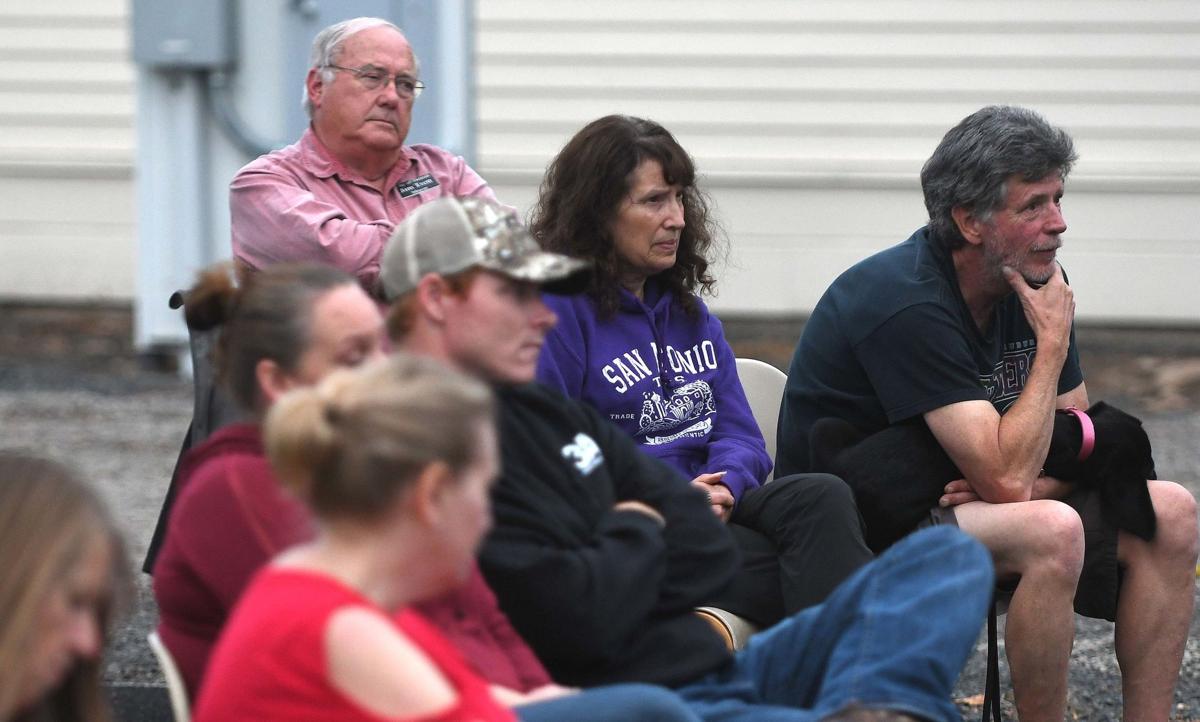 Detroit Mayor Jim Trett, far back, listens to the concerns of fellow Santiam Canyon residents during the town hall. 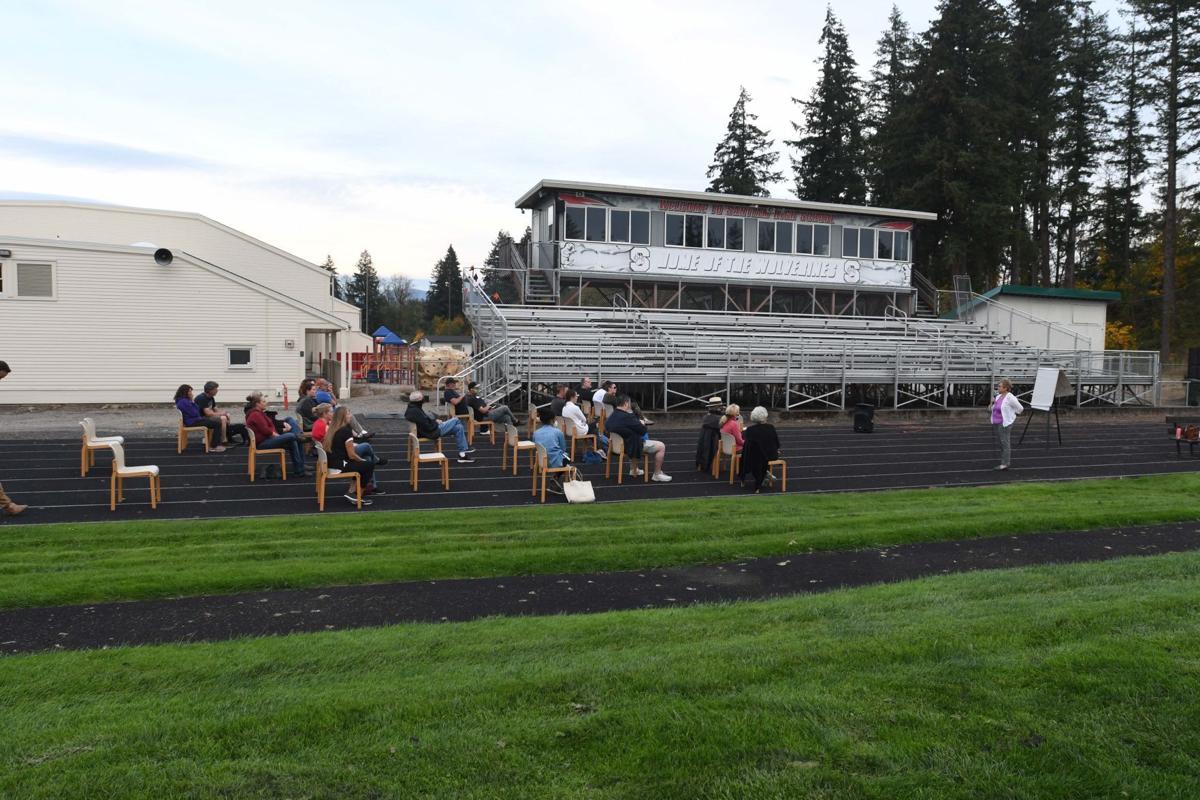 Some Santiam Canyon residents no longer have their homes — some do. One thing they all share after the height of the Beachie Creek wildfire’s destruction is questions about what went wrong during evacuations.

On Tuesday night, residents from both Linn County and Marion County gathered at the Santiam High School football field for a town hall with State Rep. Sherrie Sprenger (R-Scio).

“In a crisis, we never have enough information,” Sprenger said. “And the information was changing so rapidly … but that’s just a function of a crisis.”

The most common concerns among the group regarded faults in local emergency alert systems, which are heavily reliant on cell phone signals or internet connections that many either lost during the wildfire or are generally without in their rural communities.

None of the attendees said they received a reverse 911 call, and around half of the crowd got inconsistent alerts to their smartphones after initially being notified of high winds.

“There are different forms of communication besides electronics,” said Lyons resident Kim Miller. Having grown up in Kansas, he said he’s used to hearing sirens and going underground whenever a tornado came close.

Detroit after the fire

Linn County Sheriff’s Office spokesperson Capt. Michelle Duncan confirmed that no such system exists here. If emergency alerts are to be strictly electronic, Sprenger said, the current system needs to be “improved or it should be trashed” because it gave Canyon residents a “false sense of security.”

But, Duncan confirmed Thursday afternoon, "As to not be overly reliant on technology, we additionally sent every available deputy to the area, called out deputies in to work and activated Search and Rescue members."

As for alerts, Duncan said on the afternoons of Sept. 6 and 7 alerting residents around the the Mt. Jefferson Wilderness and all of Linn and Benton counties, respectively, warning of the Lionshead wildfire threat and high winds.

Duncan also clarified that — aside from alerts automatically sent to radio stations, TVs and landline phones — residents must sign up for the Linn-Benton Alert system. In emergencies, much like Amber Alerts, alerts can be sent out to call phones via towers to those in a designated area.

"However, understand it is dependent on which tower their phone physically is connecting to, which is not within our control," Duncan said. "It is my understanding two people could sit next to each other and each hit a different tower."

All of those types of alerts, she added, were used during the recent evacuations.

Debbie Fawcett, a Gates resident, wanted to know why the power was not shut off in response to reports of high winds in the area. The Beachie Creek fire had spread to the opposite side of the Santiam River from her home, but she said she and neighbors still witnessed sparks coming from at least one transformer nearby.

Within hours, her home was gone.

Although local electricity providers such as Pacific Power and Consumers Power Inc. have certain protocols to kill power in emergency situations, Sprenger said, “they clearly started too late.”

“Even though it’s too late,” she continued, “that needs to be addressed in a better way.”

Pacific Power’s procedure — known as a Public Safety Power Shutoff — is relatively new and not available in the Santiam Canyon, according to company spokesman Drew Hanson. Areas currently serviced are only located in parts of Douglas, Hood River, Jackson, Josephine and Wasco counties.

“Our existing designated Public Safety Power Shutoff areas were selected based on 10 years of historical data and include considerations of past fire behavior, topology, wind speed and directionality, fuel loading, real-time observations and public safety risk,” Hanson said in an email on Wednesday evening. “We will continue to provide support here and throughout the state as we all move to recovery efforts. We are also cooperating with state and federal authorities to understand this historic event.”

Steve Nielsen, a resident of Gates Bridge East between Gates and Niagara, said he wondered why community members weren’t given pre-evacuation notices due to the weather forecast.

“Nobody knew it would turn into a firestorm like it did,” Nielsen said, “but the potential was there.”

Sprenger, although not “indicting the sheriffs,” said pre-evacuation alerts are on them to decide.

“This all happened so fast that we had very little time to give pre-alerts,” Duncan said in a phone call on Wednesday. “This was an unprecedented event. What had happened in those fires happened so quickly, like in a matter of minutes, that it was beyond what the fire departments had anticipated and certainly beyond what we anticipated would have happened.”

Otherwise, she continued, “We certainly would have alerted the public.”

Sprenger said she wonders, much like “when you’re a kid and you break something and you try to minimize what happened,” if the alert system was poorly managed.

Todd Miller, superintendent of the Santiam Canyon School District, praised those in attendance who looked out for one another due to the ambiguity surrounding alerts.

“If it was not for neighbors knocking on doors and calling each other,” Miller said, “the death toll would have been much greater.”

For varying reasons due to differences in insurance coverage, some said they’re having difficulty rebuilding what they’ve lost. Some Idanha residents in attendance said they haven’t even been able to access their homes to assess their damages yet.

The last thing Sprenger wants, she said, is red tape causing people to abandon their rebuilding efforts and move somewhere else.

Sprenger encouraged everyone to “fill out stuff” as much as they can for relief from FEMA, the Red Cross, or similar agencies. Even if applicants are denied aid the first time, she said, “It’s at least a placeholder.”

More information on wildfire assistance programs can be found at tinyurl.com/MidValleyWildfireHelp.

A Pacific Power representative was initially quoted saying the company was able to de-energize power lines so as not to interfere with firefighting efforts. That was misleading because the representative later confirmed that he was referring to the Medford area in Jackson County, not in Linn or Marion counties where the Santiam Canyon is located.

Gallery: Lyons-Mehama area after the fire

Gallery: Detroit and the Santiam Canyon after the fire

Wildfire assistance resources and how to help (Sept. 23)

Here is a list of resources for people who have been displaced by wildfires in our area and people who want to donate money, goods or services…

SANTIAM CANYON — Wind gusts of 60 to 80 miles per hour fanned forest fires throughout much of eastern Linn County Monday evening, forcing the …

In the smoke-filled Santiam Canyon on Friday, multiple law enforcement agencies stood watch to protect property from looters and keep the publ…

As spreading Cascades wildfires forced North Santiam Canyon residents from their homes late Monday and early Tuesday, some of them found a tem…

The rebuilding of communities hit hard by recent wildfires — from affluent and urban Napa, California, to rural and economically challenged De…

Sheila Nielsen, of Gates, shares with Rep. Sherrie Sprenger about the lack of evacuation warnings the night the fire swept through their community.

Debbie Fawcett talks about the lack of warning while seated with her husband, Jamey, and daughter, Abby. The Fawcetts lost their home in the fire.

More than 30 Santiam Canyon residents gathered at the high school football field in Mill City on Tuesday night to express their concerns during a public meeting conducted by Rep. Sherrie Sprenger.

Detroit Mayor Jim Trett, far back, listens to the concerns of fellow Santiam Canyon residents during the town hall.