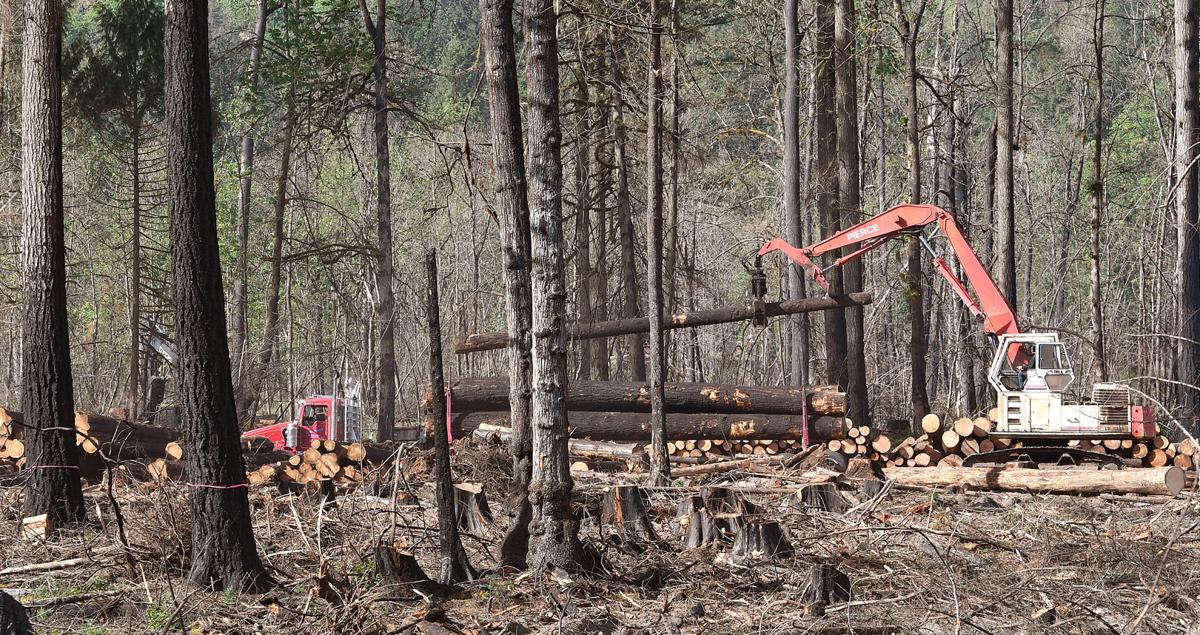 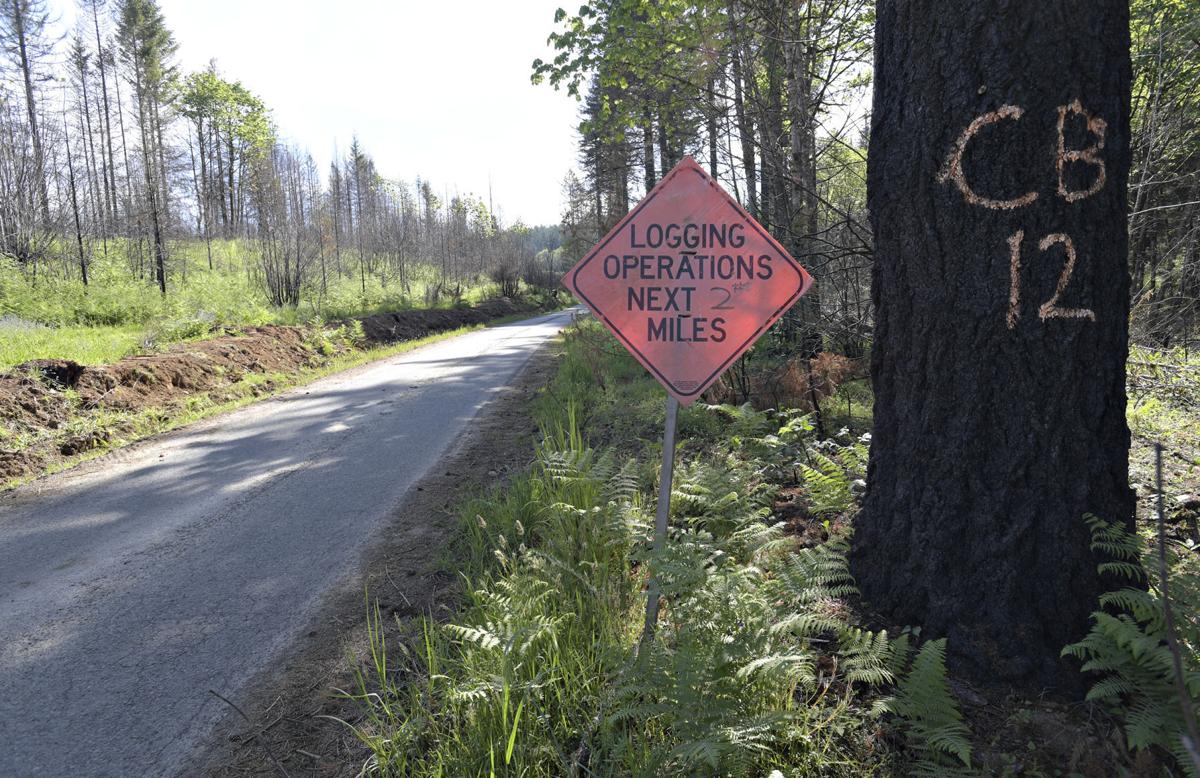 The road to Santiam State Forest's horse camp remains closed as loggers are actively working in the area near Gates. 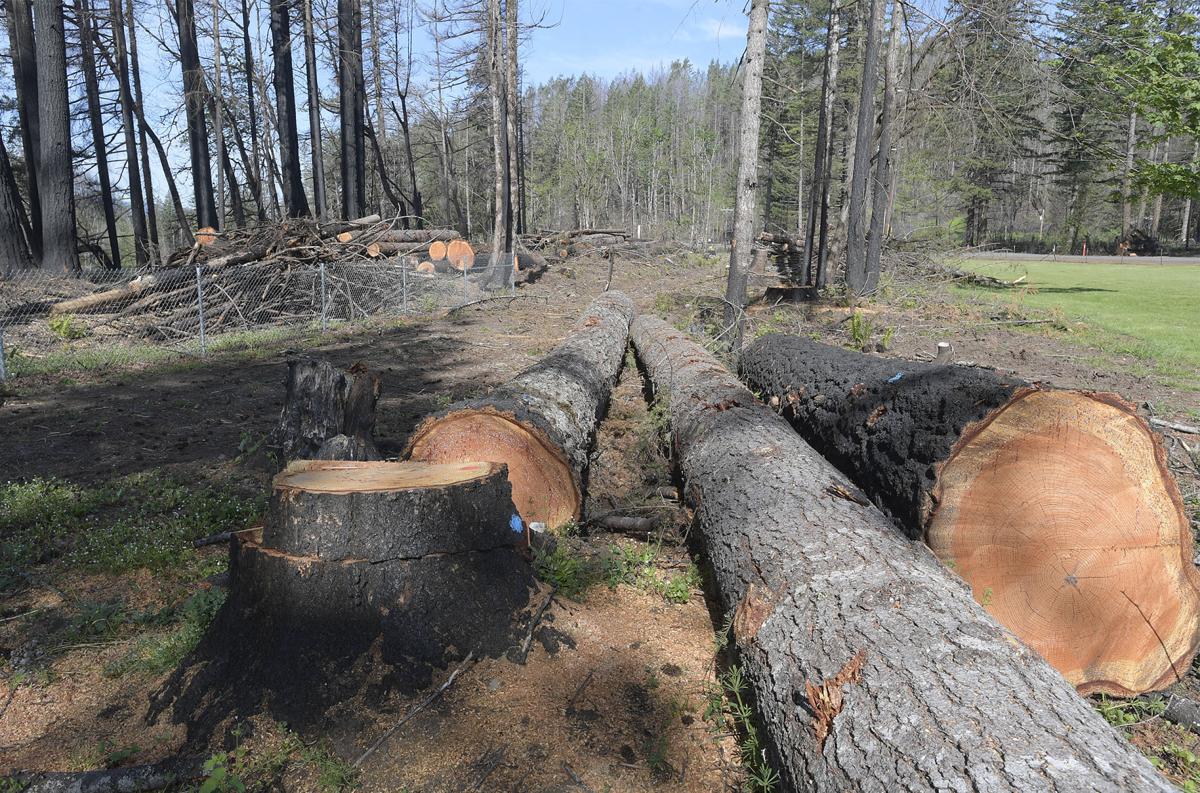 Trees logged at the Maples Rest Area east of Gates. 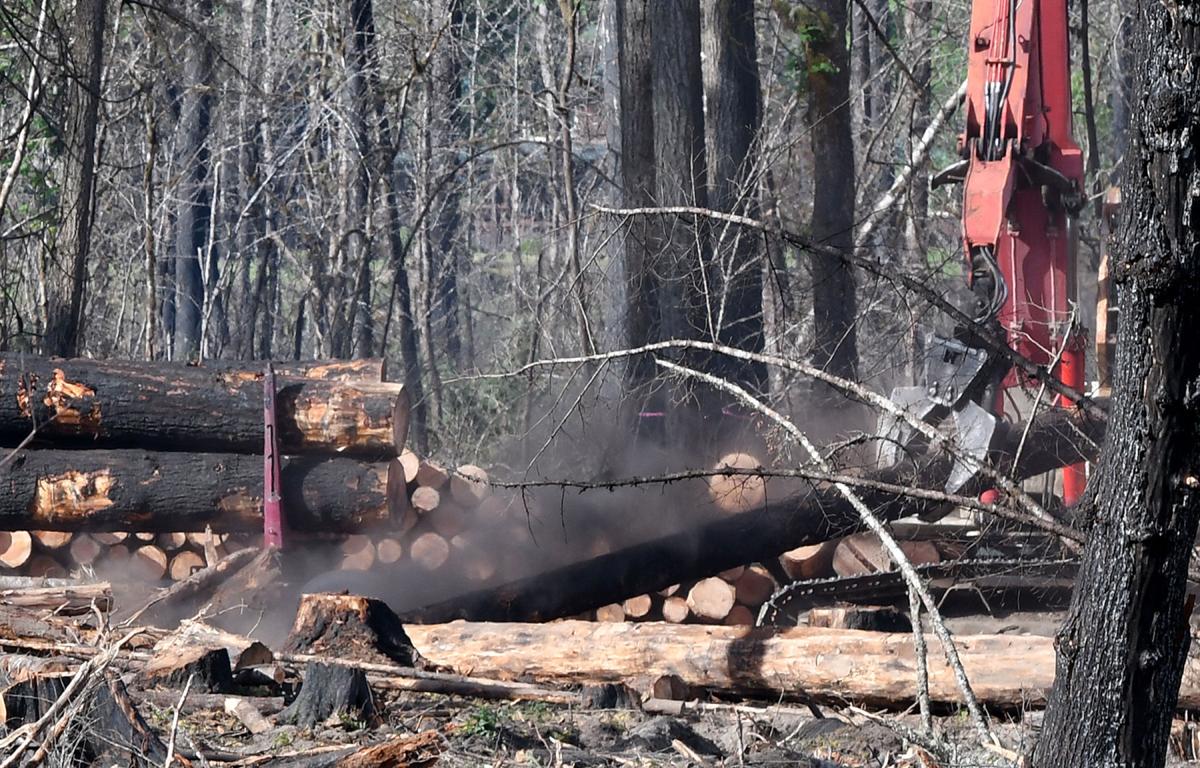 Ash flies from a log being sorted on Bureau of Land Managment's Fishermen's Bend Recreation Area along the Santiam River near Mill City.

A Multnomah County judge denied issuing a pause on Oregon’s post-wildfire salvage logging and reforestation efforts following the 2020 Labor Day fires. That means that the timber sales and replanting can continue, but it doesn’t mean the lawsuit is over.

The decision in Multnomah County came as a result of a lawsuit brought against the Oregon Department of Forestry by seven conservation groups. The primary petitioner was Cascadia Wildlands based in Eugene.

Judge Jerry Hodson determined on April 30 that, based on the evidence provided by both sides, there wasn’t a strong enough case for the petitioners to win in court and therefore he couldn’t grant the requested emergency injunction on post-fire operations.

ODF issued a statement shortly after, touting the decision.

“We’re grateful that the preliminary injunction was denied and the judge found the state is likely to prevail on the claims presented,” says ODF’s statement on the decision. “ODF’s balanced approach keeps the Santiam State Forest on track towards long-term recovery and will provide much-needed revenue for the communities hit hardest by 2020’s fires.”

The conservation groups say they still have options to pursue the matter as a whole, however, since the injunction was just one part of the larger case, which asserts that the state’s salvage operations have been too hasty and risk environmental damage to the ecosystems that quickly develop in areas affected by wildfires.

A similar lawsuit has been brought against the Oregon Department of Transportation, which has been clearing hazardous trees along the right of way of Oregon highways.

“We’re definitely still pushing at it,” said Noah Greenwald, the endangered species director of the Center for Biological Diversity, which is one of the groups suing the state. “The court left us with some options.”

Those options could include an appeal of the judge’s decision to a higher court or changing the focus to target specific salvage sales that conservationists can argue will have adverse effects on the environment.

“The science is just really clear that, if the goal is to create old forests and to protect habitats, salvage logging is 180 degrees in the wrong direction,” Greenwald said.

Legal representatives for the petitioners could not reached in time for this report.

ODF says in its 2021 operations plan that the efforts had to move quickly because “fire-damaged timber starts to deteriorate quickly.” In order to capture the most value for these burned trees, they say they need to cut and sell them quickly.

Conservationists argued that wildfires aren’t an excuse to sell trees that wouldn’t normally have been cut, as outlined by the state’s 10-year timber plan. But ODF said that the revenues are needed in order to fund larger reforestation efforts and to get relief money to the communities most affected by the wildfires – like Detroit, Lyons, Mehama, Mill City, Stayton and Gates. The judge also noted that the state is allowed to revise its logging plans based on rules outlined in Oregon statutes.

ODF also notes in its post-fire operations plan that it consulted with biologists from the Oregon Department of Fish & Wildlife and other environmental agencies when crafting its salvage plan.

Linn County, as well as Marion and Clackamas counties, joined in on the lawsuit because of their financial stake in the timber sales on lands affected by wildfires. According to ODF’s operations plan, counties where the salvaged timber comes from will receive “about two-thirds” of the revenues from those sales.

While many sales have already been completed, others are still in the works. It can be difficult to know exactly what the value of those sales will be, due to market factors and the differing quality of the timber itself.

“The price of timber can be dynamic,” said Linn County Commissioner Will Tucker, who’s spearheaded the county’s timber efforts for years. “Until you know what county (the trees) are in or what the market is, you just don’t know.”

The Oregon Department of Forestry pegged the estimated revenues at nearly $22 million – a figure that represents about 3,500 acres of clear-cut or partially cut forests in the North Cascade region. Not all of that $22 million figure is from timber sold from Linn County, however.

Tucker reiterated that Linn County relies on timber sales to fund certain services, so the financial stake in this lawsuit was enough for the Board of Commissioners to agree to join the lawsuit as interveners on the state’s behalf. Linn County hired the same attorney it used to successfully sue the state in a $1 billion judgment related to general timber practices and revenue disbursement back in 2019.

“We count on the average flow of $1-3 million a year from timber sales,” Tucker said. “It pays for everything from sheriff’s deputies to go out and help people to even a portion of my own salary.”

He went on to explain that, while counties will see higher initial revenues from the state thanks to these salvage efforts, the loss in future revenues is likely much greater.

“Many of those trees are gone — they’re dead, they’re burnt,” Tucker said. “They’re so damaged that they’re worth nothing. Those trees will take 70 or 80 years to get back into the process … our revenues will not be (what) we normally expect to get.”

As such, Tucker said that the Linn County board will need to have some tough conversations in the future about how to make up for the loss of that revenue.

“We, as commissioners, have not yet talked this through but we’ll need to set that money aside because in the future … when that average of $2 million instead becomes a couple hundred thousand, we will need to have that revenue replaced somehow,” he said.

Tucker also drew comparisons to Linn County’s previous timber lawsuit, in which several Oregon counties sued ODF for what it deemed were unfair practices surrounding non-wildfire logging and sales of timber. While the counties won an historic judgment of more than $1 billion in that case, none of the counties have seen a dime and it will still likely be years before the appeals play out.

“A judge’s opinion today can be overturned by a second judge tomorrow,” Tucker said.

That’s why, he noted, that Linn County joining in on this case could be costly, as they  hired the same attorney they used before, John DiLorenzo of Portland firm Davis Wright Tremaine. But, in an agreement with Clackamas and Marion counties, the other two interveners in the case, the legal costs will be split evenly between each county.

The most significant motion that Linn County has made in the case so far is to argue for a relocation, saying that Multnomah County isn’t where the fires occurred or where the Oregon Department of Forestry is based. Instead, the case was able to be filed there because one of the petitioners lives there.

The judge initially ruled that he had proper jurisdiction over this case, but Tucker says the counties’ attorney will attempt to re-argue that point if the case goes forward.

Now, the case is in wait-and-see mode, where both sides are seeking a conference date with the Multnomah County judge to schedule out the next round of hearings.

Even if it takes years like the last lawsuit did, Tucker says it will be worth it to protect the county’s revenue.

UK coal mine plan tests government ahead of COP26

UK coal mine plan tests government ahead of COP26

Jessica Gomez has overcome plenty of adversity in her life, so why not try to become Oregon’s first female Republican governor, too?

A butterfly that’s native to the Willamette Valley, once thought to be completely extinct, has rebounded in the last 20 years. In what’s being…

The road to Santiam State Forest's horse camp remains closed as loggers are actively working in the area near Gates.

Trees logged at the Maples Rest Area east of Gates.

Ash flies from a log being sorted on Bureau of Land Managment's Fishermen's Bend Recreation Area along the Santiam River near Mill City.