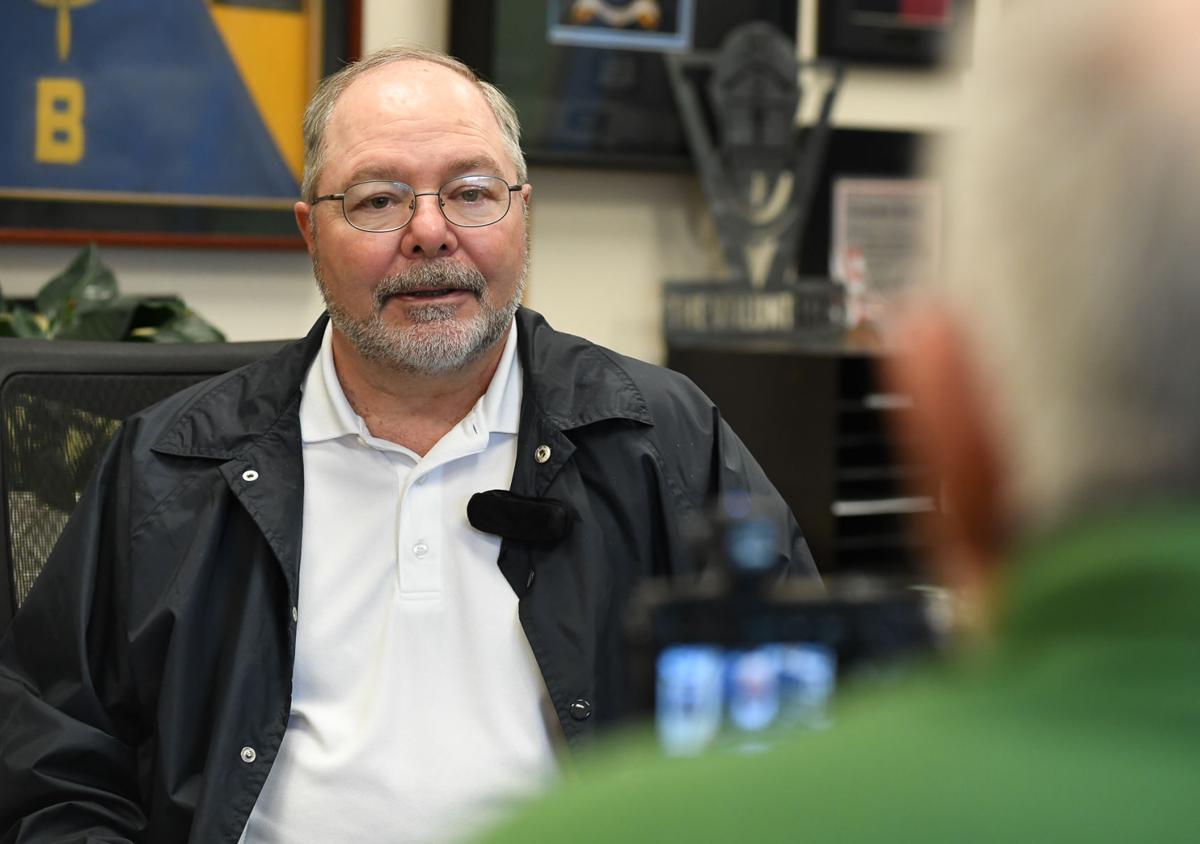 U.S. Navy veteran Larry Sayles talks about his experience on a submarine while making a video on Tuesday afternoon. 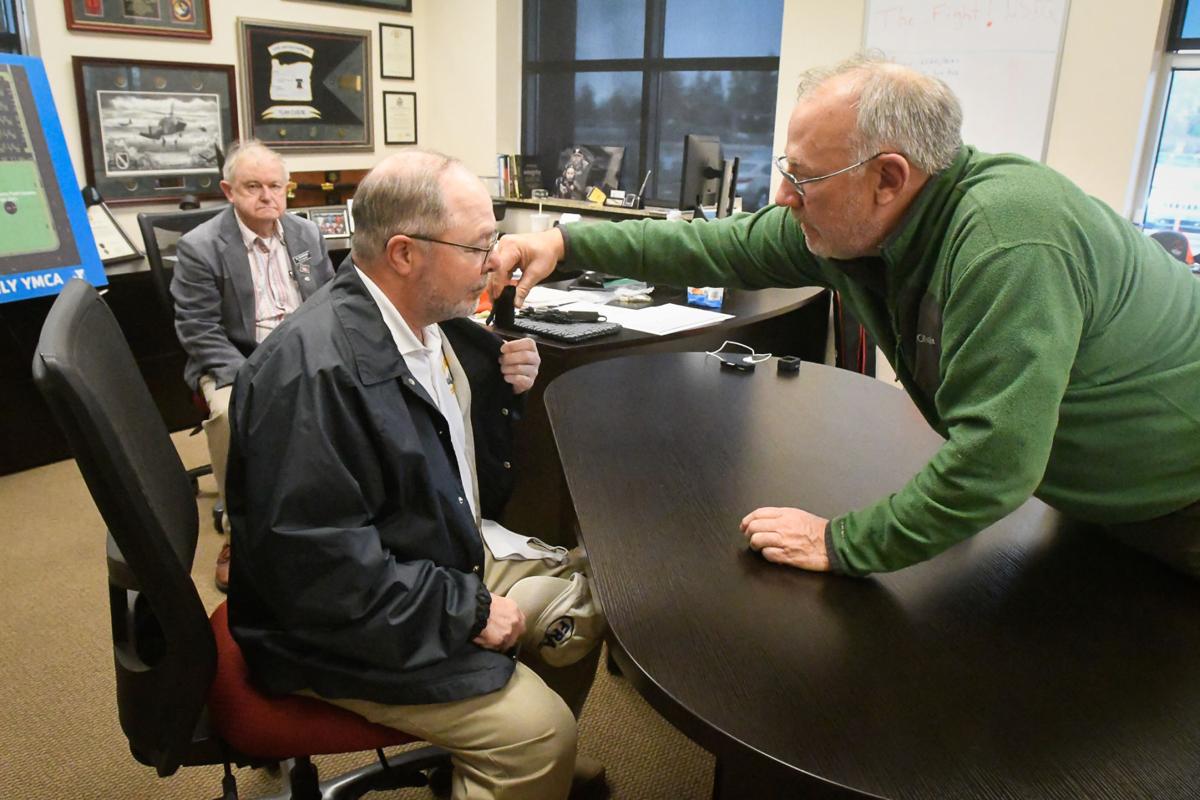 The group of distinguished veterans who will be honored as part of the Albany Veterans Day Parade this year is set, and they look forward to bringing the parade and ceremony at Timber Linn Memorial Park in Albany back to its former glory, they say.

The event, taking on a reverse parade format for the second consecutive year, has grown from the single-parking-lot affair that it was last year. In 2020, the reverse parade saw people drive to the Mid-Valley YMCA to behold floats that were erected in the parking lot.

The result was a traffic jam that filled Pacific Boulevard, plus fewer parade floats and vehicles than people were used to.

“Last year was kind of skimpy, and we didn’t want to do that again,” said this year’s Veteran of the Year, Larry Sayles. “This is something that we should have every year without fail.”

That’s why people have come out of the woodwork to salvage the parade committee this year after several longtime members retired from the board or had to scale back their involvement because of health issues.

This year’s collection of honored vets reflects this longtime tradition of the Linn County community joining forces to keep this annual celebration alive, even during a pandemic that placed heavy restrictions on social gatherings.

The floats can be found at the YMCA, West Albany High School, the Linn County Fair & Expo Center and on-site at several participating businesses. There will even be marching bands, hot rods and BMX bike races.

Not only will each float host an honored veteran, the parade committee also hid 25 “patriotic bears” around the locations. Attendees who find them all (and can prove it) can enter a raffle for a chance to win free prizes.

The community at-large will vote on their favorite floats online or by turning in a slip at the Mid-Valley YMCA. The deadline to vote is 5 p.m. Thursday, Nov. 18. The results will be announced the following week.

One of the vets who will be featured during the parade and corresponding ceremony at Timber Linn Memorial Park is Bill Clotere, 85, who spent 20 years in the Army as a Ranger and paratrooper.

He said this helps ensure local veterans who served can be all be honored but that the title of Veteran of the Year always goes to someone who not only served with honor but who continued to serve the communities and fellow veterans after service ended.

Veteran of the year

These high standards are represented well in this year’s Veteran of the Year: Sayle, a retired Navy petty officer who served on submarines from 1976 to 1981.

When he exited the service, he got involved with local Rotary clubs and frequently connects with veterans when he visits Veterans Affairs hospitals or the Veterans Home in Lebanon. He’s active with the Albany VFW post and said he’s attended the Veterans Day Parade since he was a little kid.

He’s part of a committee that regularly cleans up Eleanor Hackleman Park in Albany, and he also serves as part of the local Military Order of the Cootie, the VFW’s Honor Guard.

For the past three years, he’s also organized flag-plantings at Willamette Memorial Park Cemetery, with American flags placed by the grave markers of local armed forces members who are buried there.

“I’m doing it for the men and women vets and for our community,” he said of what motivates him to volunteer.

The parade committee has received complaints from community members who want the parade to return to its pre-pandemic format, Sayles said. While he understands their point of view, this year’s Veterans Day is the result of a lot of people’s hard work and scrambling to accommodate for a changing COVID-19 landscape and lots of unfortunate circumstances, he said.

“I don’t care for it myself. I prefer what we used to have,” he said, adding that he and his family have watched the parade from the same spot downtown for decades. “But we were short on time and short on volunteers. So don’t complain: Come out and help.”

The reverse parade starts at 12:30 p.m., right after the ceremony at Timber Linn Memorial Park is expected to wrap up. The top sponsor of this year’s parade is Burcham Metals, which will also host a parade float at its Pacific Boulevard location.

Attendees will be able to access the map of all the parade stops online or with physical paper maps thanks to printing efforts by Oregon Web Press.

The maps can be found online at the Albany Visitors Association website (www.albanyvisitors.com) or can be picked up from several local businesses like the Mid-Valley YMCA, the Boys & Girls Club, Albany City Hall, or your local Veterans of Foreign Wars post.

When asked what makes the event so popular year after year, Clotere credited the “enthusiasm of the entries.”

“And the spectators are unbelievable,” he added.

Find out what time the F-15 Eagle fighter jets are scheduled to pass by.

Like last year, it was a 'reverse parade.' But, it was much bigger than last year's.

How Groundhog Day is connected to astronomy

How Groundhog Day is connected to astronomy

Pregnant panda! Watch as this giant panda gets an ultrasound

Pregnant panda! Watch as this giant panda gets an ultrasound

U.S. Navy veteran Larry Sayles talks about his experience on a submarine while making a video on Tuesday afternoon.