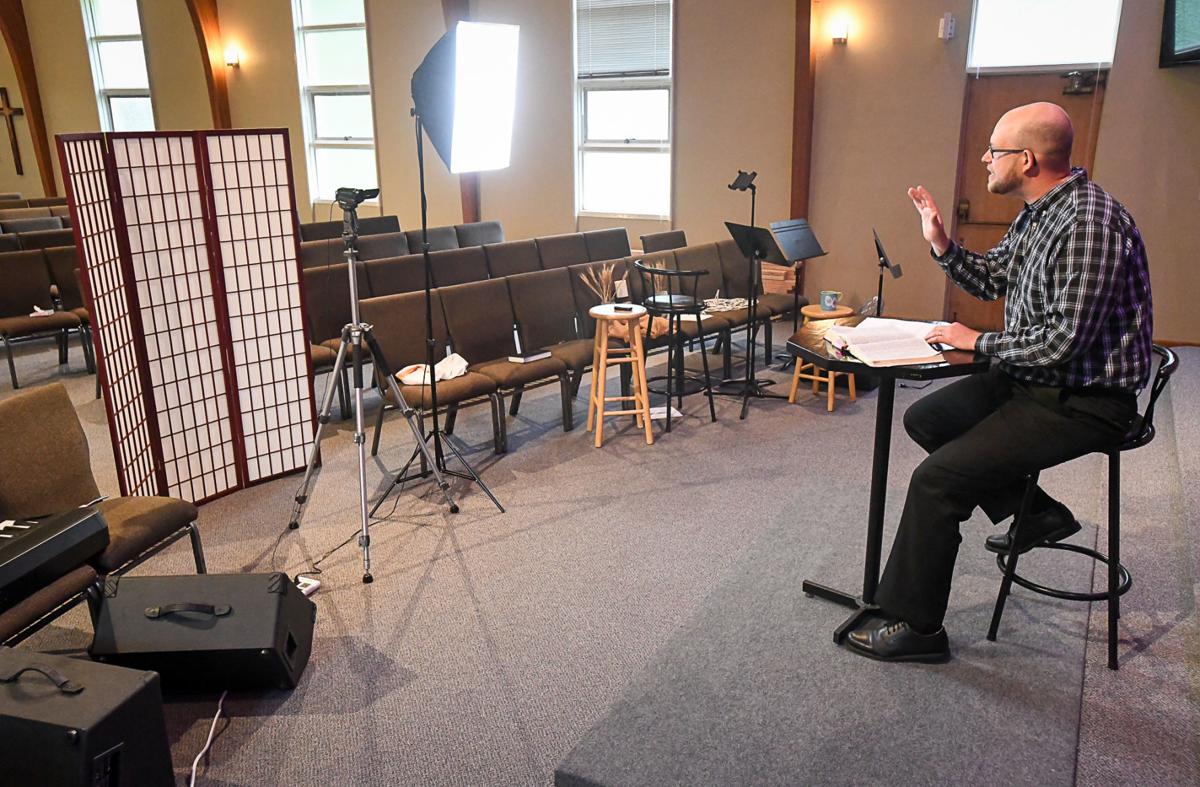 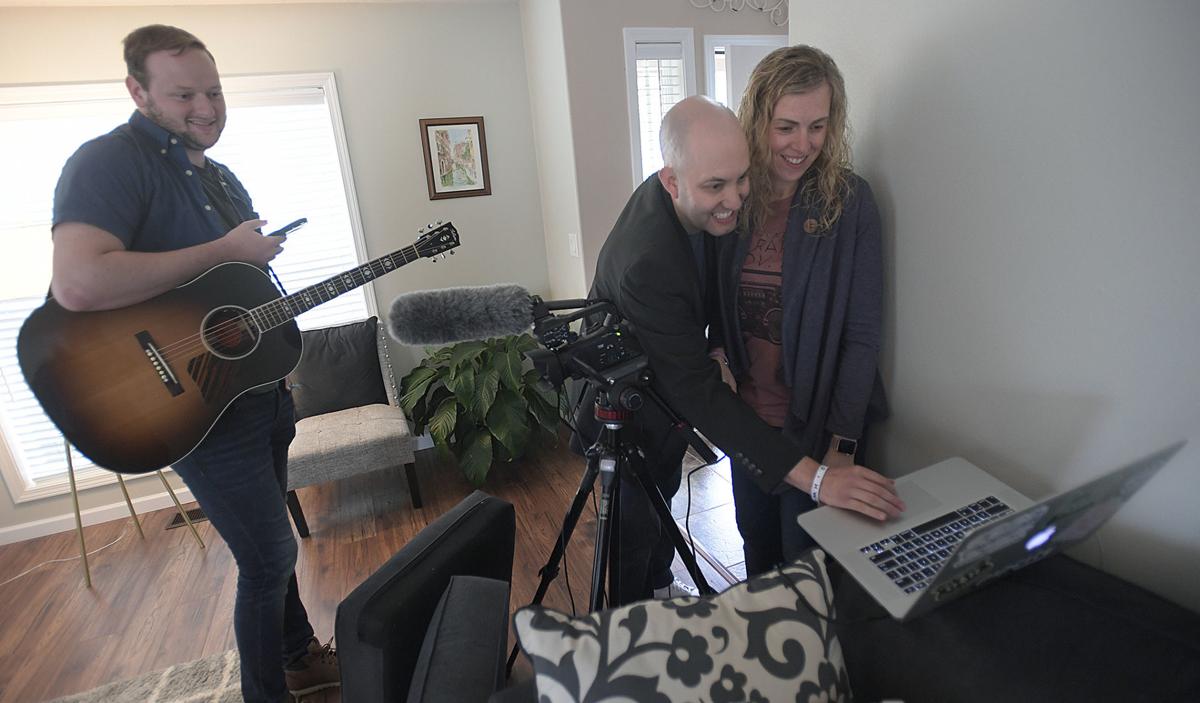 South Albany Community Church Associate Pastor Rusty Stevens and his wife, Karen, work on setting up the video for Worship Pastor Nathan Sutherland as they prepare to record the church's Sunday service. 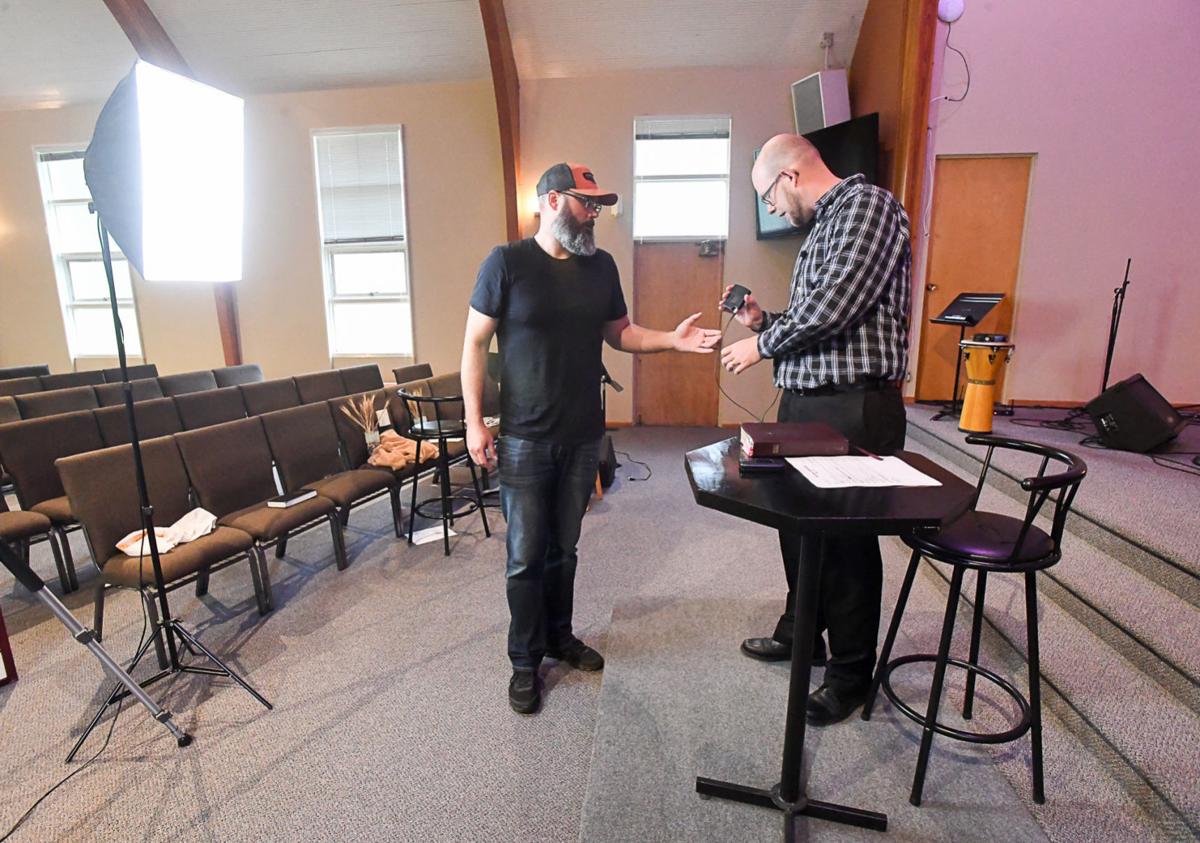 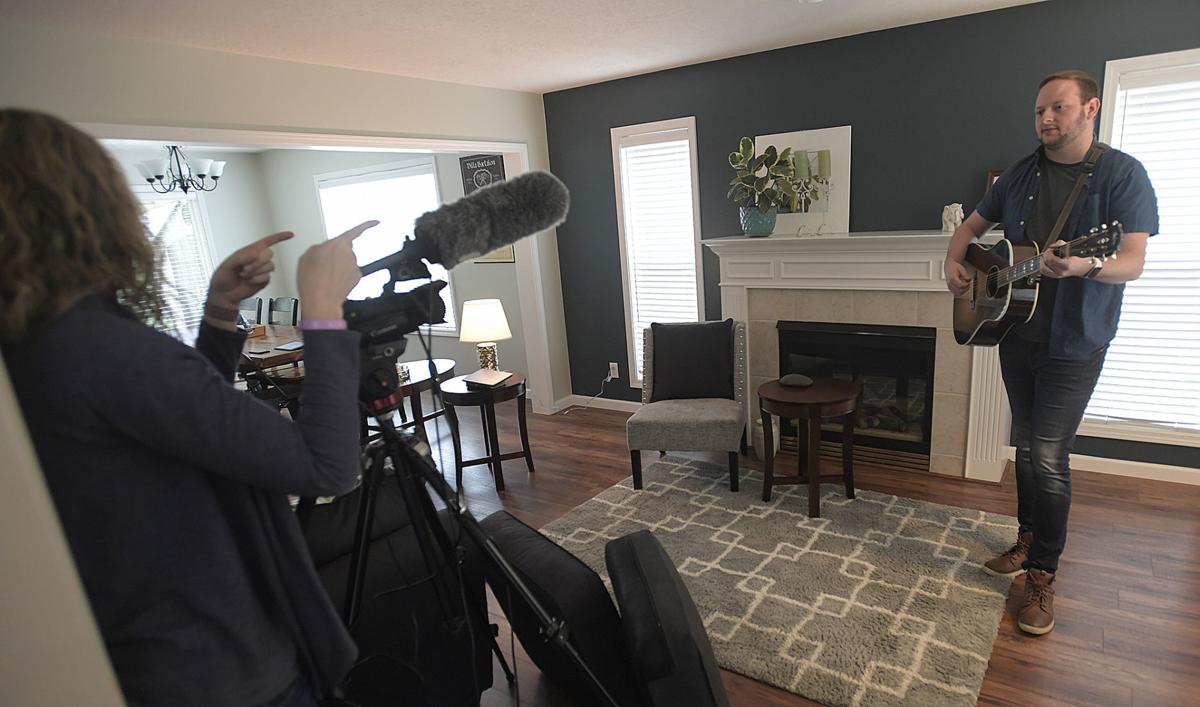 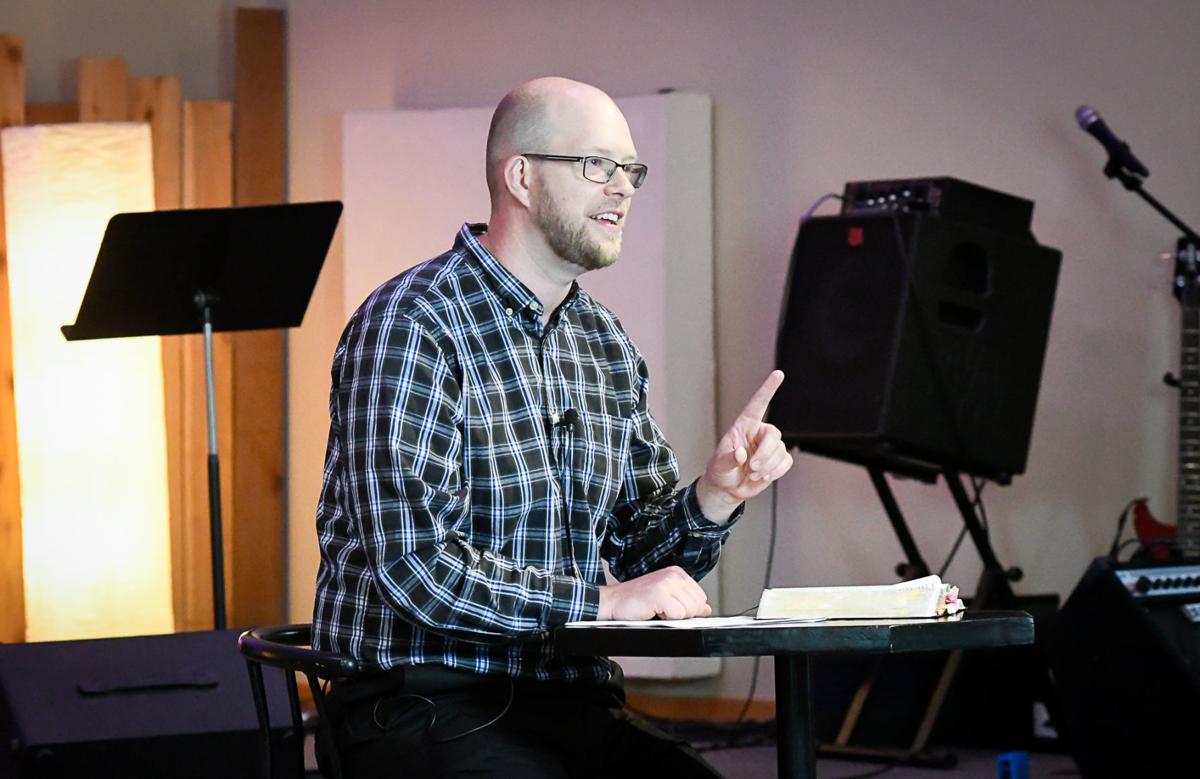 Thorson preaches to the camera. 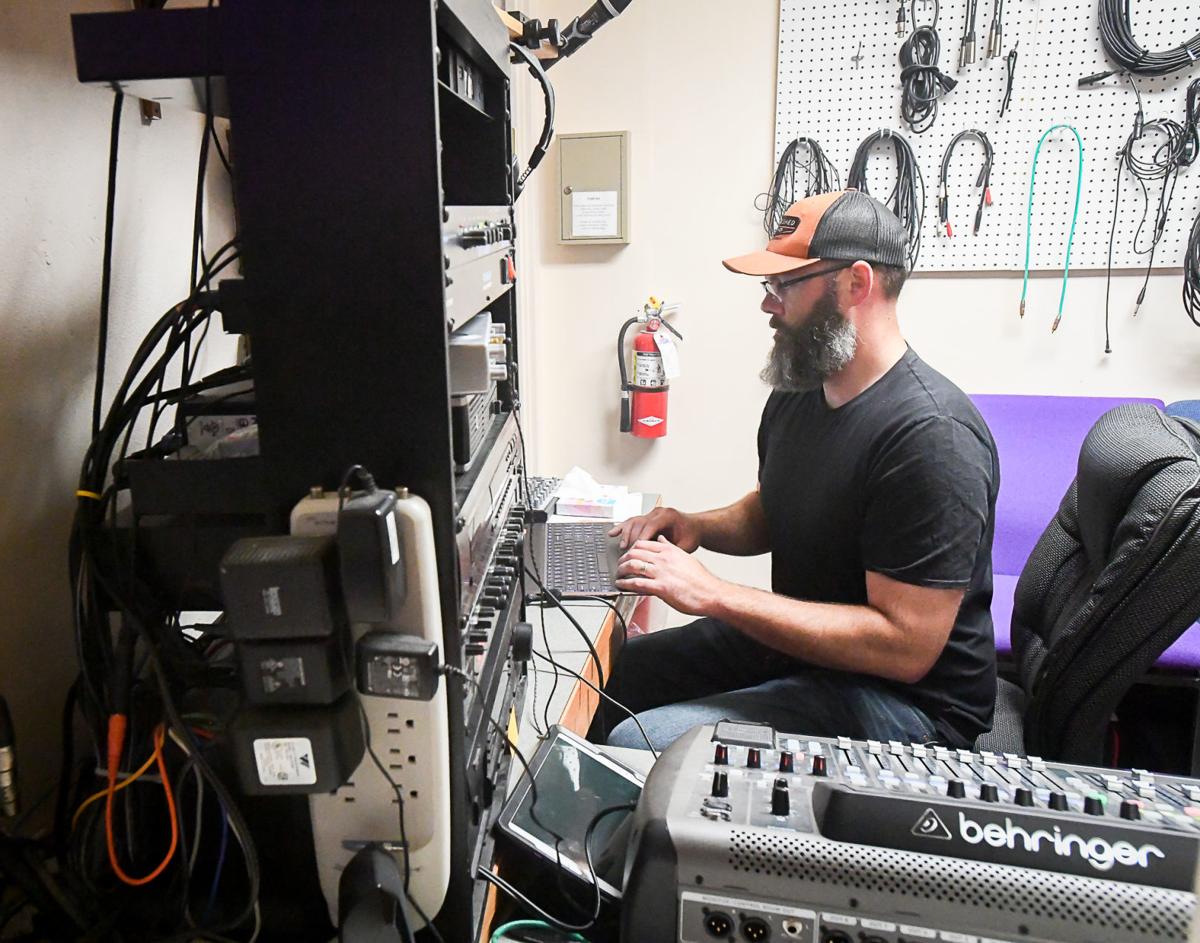 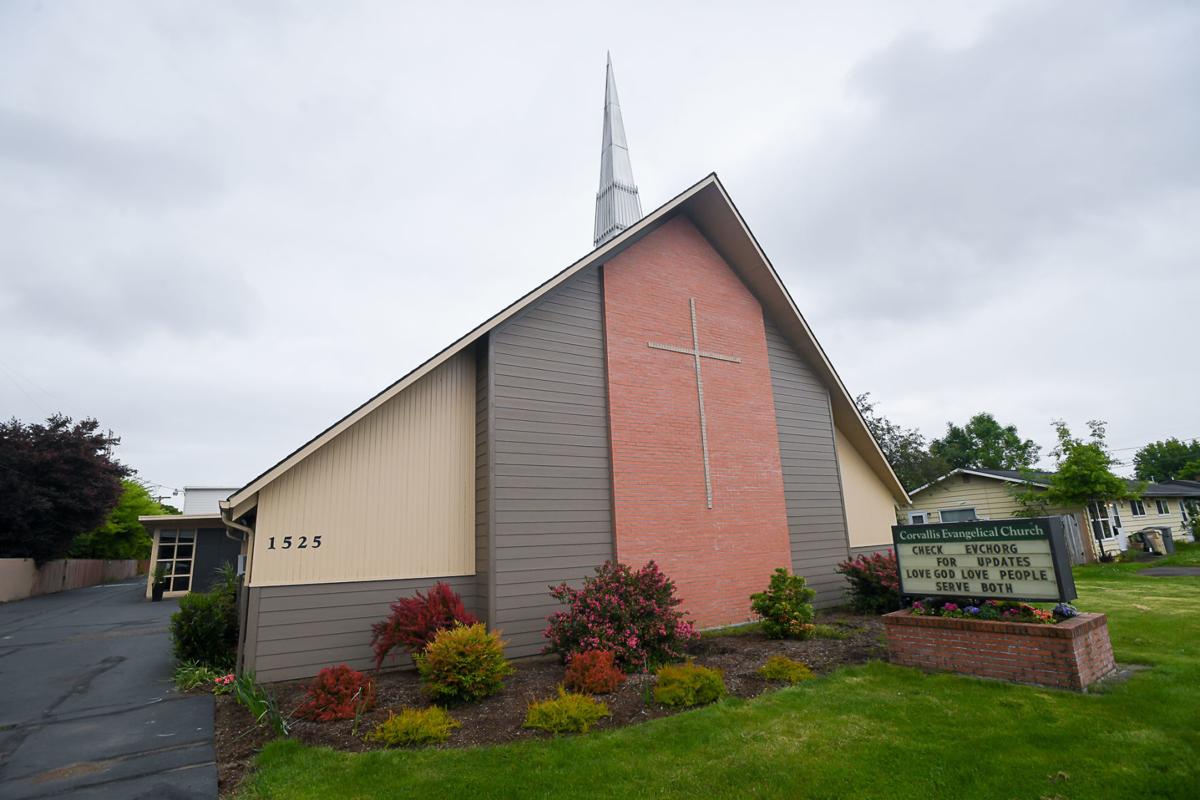 The Corvallis Evangelical Church has begun videorecording services for the congregation to watch online. 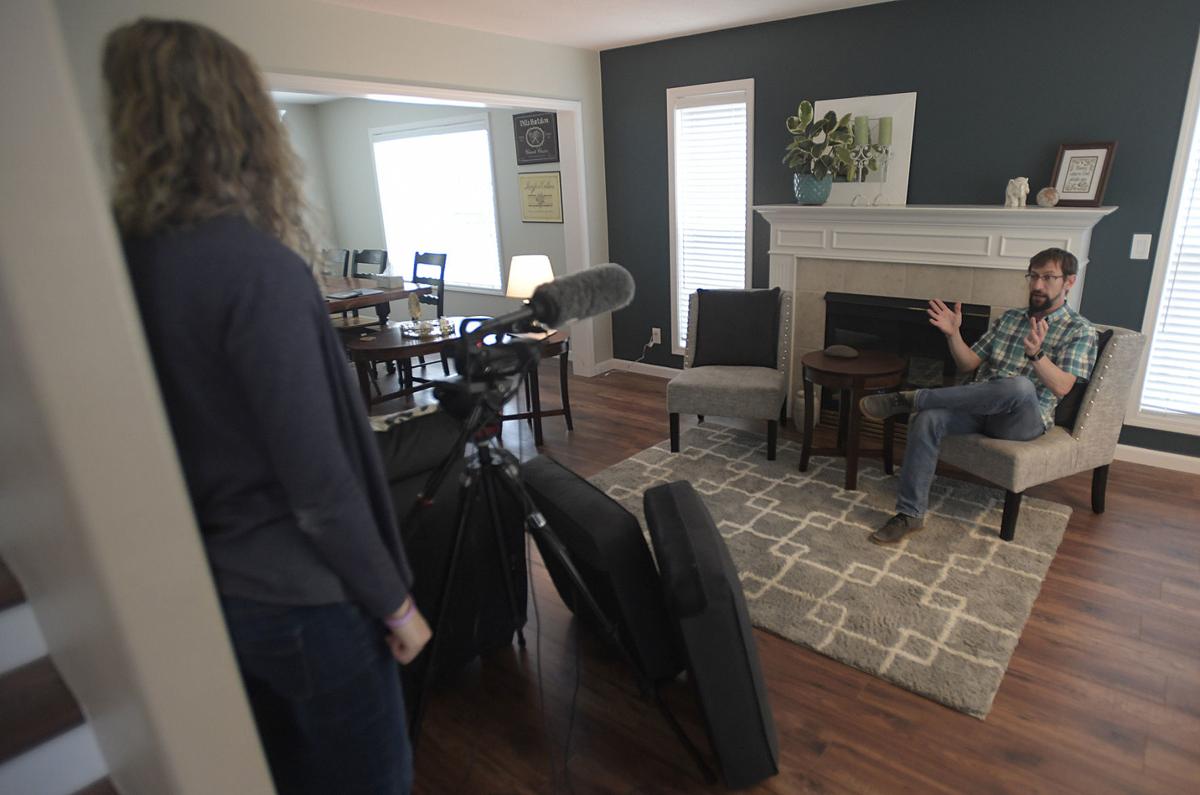 Stevens records Lead Pastor Josh Conn as he delivers a message for the Sunday sermon. 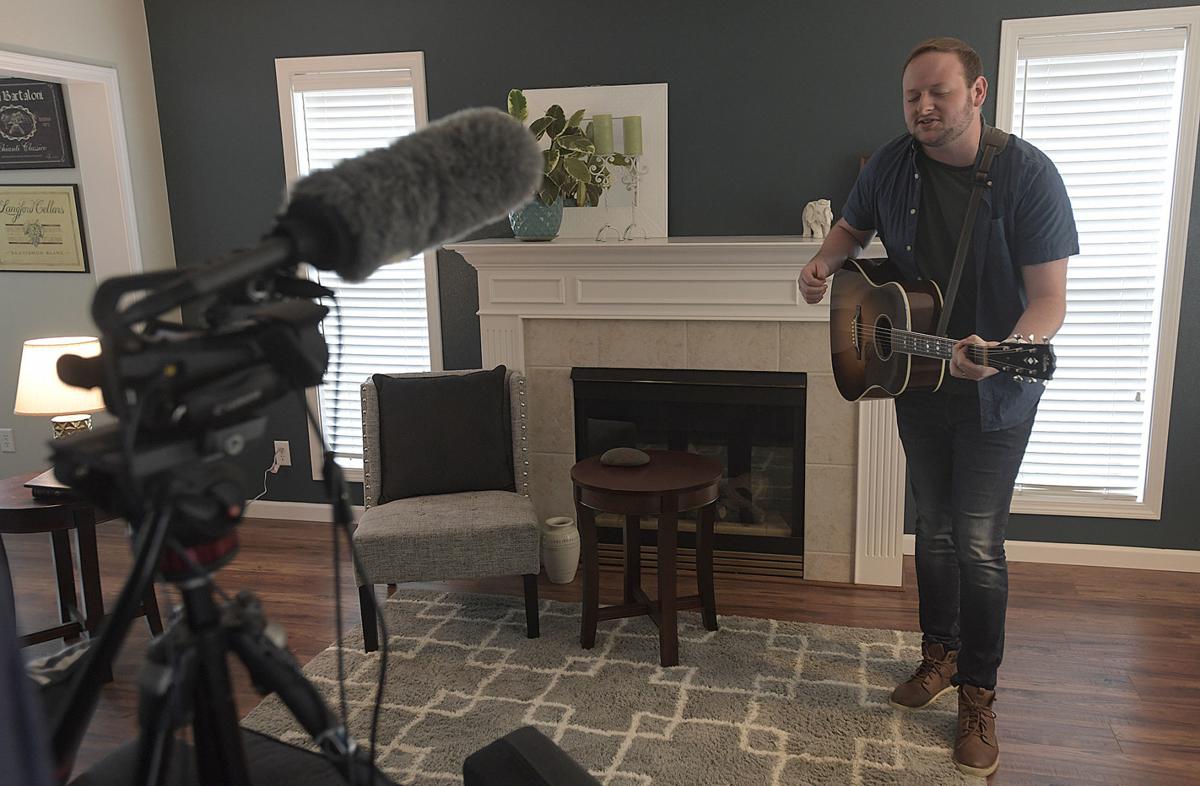 Sutherland sings during the recording of the Sunday service for South Albany Community Church.

As for me, I will always have hope;

I will praise you more and more.

By the time the virus arrived on our doorstep, it had already killed thousands.

For those in the mid-valley struggling to find routine in the chaos, their hearts heavy with worry, all that was left to offer were thoughts. And prayers.

But the last refuge for the devout — the sanctuaries of their houses of worship, holy halls aglow with candles of hope and whispers of faith — fell victim to the plague as well.

In early March, one by one religious institutions around the mid-valley closed their doors either out of concern for their congregations or in adherence to a state order banning gatherings of more than 10 people.

Communions that traditionally bloom with the spring wilted; funerals were robbed of ceremony, leaving grief at the feet of those who were left; and worship services went dark.

But joy cometh in the morning.

“It was surreal,” said Pastor Ryan Thorson. He heads the Corvallis Evangelical Church, which, like many others around the valley, opted to close its doors prior to the order from Gov. Kate Brown that set strict social distancing mandates in place.

Schools were closed, retail stores could not conduct business, restaurants were limited to takeout service, and the ban on gatherings of more than 10 people meant that formal services — at the height of Easter and Passover season—were out of the question.

“We made the decision a week before,” Thorson said. “There were some concerns in our community, so we suspended our in-person gatherings because our church’s vision is to love God, love people and serve both. That was our guiding factor.”

Thorson’s flock joined at least 20 other congregations across Linn and Benton County in finding their place of worship closed for business, including the 500 worshipers of South Albany Community Church.

The church closed on March 13, not knowing when it would open its doors again.

“The hardest part,” said Pastor Rusty Stevens, “is the people in nursing homes. We haven’t been able to do funeral services.”

The church has lost seven members of its congregation since it stopped meeting in person 10 Sundays ago.

When Kevin Churchill got down on one knee at the Cliffs of Moher in Ireland, he envisioned marrying Jennifer Bruce in the traditional way — a church wedding with a white gown, flowers and their loved ones crowded around.

“Once the virus pandemic hit, we considered postponing the wedding," said Bruce. But Father Fred of St. Helen Catholic Church in Sweet Home had another idea. "Father Fred suggested we actually move it up,” Bruce said. “It all came together in a week."

Flowers from the local grocery store, a dress from a thrift shop and traditional Celtic elements came together for a church wedding — with a social distancing backdrop.

Loved ones sat every other pew, and guests were limited. The priest kept his distance, and the happy couple, instead of emerging from the church to a fluttering of rice, made their exit to the blaring of car horns.

About 50 of their friends and family had gathered in the parking lot.

It's just one of the ways religious institutions have adapted to the new world.

Of 20 houses of worship surveyed by Mid-Valley Media, 17 are currently holding virtual services via Facebook Live, Zoom or YouTube.

"We sent an email out," said Stevens. "We got our worship leader with a guitar, a camera person, and we did about an hour of a live service that first week. It was a lot of digital hellos, high fives and hugs."

But social media platforms still left a hole in the heart of the church. Some members of the congregation are without internet service or are not tech-savvy.

Thorson said his congregation adjusted and tended to those who couldn't join them online.

"We tried to deploy a tech team," he said. "We call and check in with our seniors and people at risk of being over-isolated."

St. Helen, in Sweet Home, was one of the few congregations not to utilize social media platforms. Instead, Masses were limited to five people and Father Fred Anthony.

Faith Lutheran Church in Albany did make use of Zoom and Facebook but tackled the absence of communion with an outside-the-box (and outside the church) solution.

It opted to hold communion in the parking lot once a month, four cars at a time.

More than a Sunday service

"It's been good to see our church family not think internally about our own needs but to think about the community," said Thorson.

His congregation of about 300 people has moved outside the sanctuary and into the community.

"People have provided financial resources," he said. "We're putting microshelters for the unhoused in the parking lot. People are reaching out with phone calls and letters. We're staying connected as a church."

Stevens has also seen his flock's faith grow. On May Day, they delivered 100 baskets to kids in the congregation, and on Mother's Day, every mother received a spa package. Father's Day may bring a drive-in movie event.

Speaking to the loss the devout may feel as social distancing mandates keep normal Sunday services at arm's length, Stevens said he encourages his congregation to see it not as oppression, but as opportunity.

"We can get together in groups of 25," he said. "We can get to know each other better. Every one in our church family has an opportunity to connect to a group of less than 25 who will meet and use social distancing. Church is not just a Sunday morning gathering."

Wednesday night a line formed outside of St. Helen Catholic Church in Sweet Home. Worshippers could come back home — if their name was on the list.

The church, following orders from the archbishop, who still stressed the need to stay home, opened for Mass again after being closed for two weeks. Frequent parishioners had their choice of one of six Masses throughout the week and were assigned to that time slot. Masses are limited to 25 people, including the priest and deacon.

If your name isn't on the list and all 25 others arrived for their assigned time, you can't come in. Those who do get in will be seated two to a pew. There'll be no singing, no fellowship, no shaking of hands to signal a wish of peace, and communion will be given via hand — and mouth, if so desired. Money will be collected via basket, as is traditional, but will then be placed in an envelope for church office staff. The church will be cleaned by ushers after each Mass.

"I think people are going to come here and see how they feel," Father Fred Anthony said. "I think we're all tired of being cooped up and not being able to receive the blessed sacrament."

A list will be kept with phone numbers and other contact information should a member of the congregation test positive for COVID-19. It will make tracing all those who came in contact with the infected person a bit easier.

"This is not something we get training for," said Thorson on how to move forward. The Corvallis Evangelical Church has no plans to open this week.

"We will wait a couple of weeks," Thorson said. "Right now, we're just trying to figure out what people are comfortable with."

On May 18, the Oregon Supreme Court ruled that Gov. Kate Brown's executive order would remain in place, barring groups of more than 25 people from gathering.

The ruling followed one from the Baker County Circuit Court, which heard arguments from 10 Oregon churches claiming the order was illegal. In the ruling, the Baker County court cited Brown's failure to go before the Legislature within 28 days of issuing her edict.

The Baker County court noted that churches, like grocery stores, can take social distancing measures and can, therefore, hold gatherings.

But in the mid-valley, houses of worship are not rushing to open their doors despite the ruling.

Of the 20 religious institutions surveyed, all remained closed. Some offered hand sanitizer for their outdoor service options, drive-by communions or limited services. But for the most part, virtual services and limited outreach efforts remain as staples for the immediate future.

Father Fred sympathizes with his flock, noting the restlessness in some religious communities, but he also offers hope.

"Daily prayer," he said, "is very important. We're supposed to keep God at the forefront and keep everything we do a prayer."

Like Father Fred, Pastor Stevens understands the desire to return to church but encourages his community to think of first responders and others as they adhere to social distancing.

"Church isn't just a weekend service," he said. "It's a group of people that care about each other every day."

How are churches in your area and throughout the country Zooming, streaming and managing their way through COVID-19? Visit the website to search our interactive database.

The lessons of 1918: OSU experts note the perils of the pandemics

The majority of the deaths happened in the fall.

The Oregon Health Authority reported 18 new confirmed COVID-19 cases and one new presumptive case on Tuesday, and, for the second consecutive …

Baker County Circuit Court Judge Matt Shirtcliff is standing by his May 18 opinion that Oregon Gov. Kate Brown exceeded her legal authority in…

South Albany Community Church Associate Pastor Rusty Stevens and his wife, Karen, work on setting up the video for Worship Pastor Nathan Sutherland as they prepare to record the church's Sunday service.

Thorson preaches to the camera.

The Corvallis Evangelical Church has begun videorecording services for the congregation to watch online.

Stevens records Lead Pastor Josh Conn as he delivers a message for the Sunday sermon.

Sutherland sings during the recording of the Sunday service for South Albany Community Church.