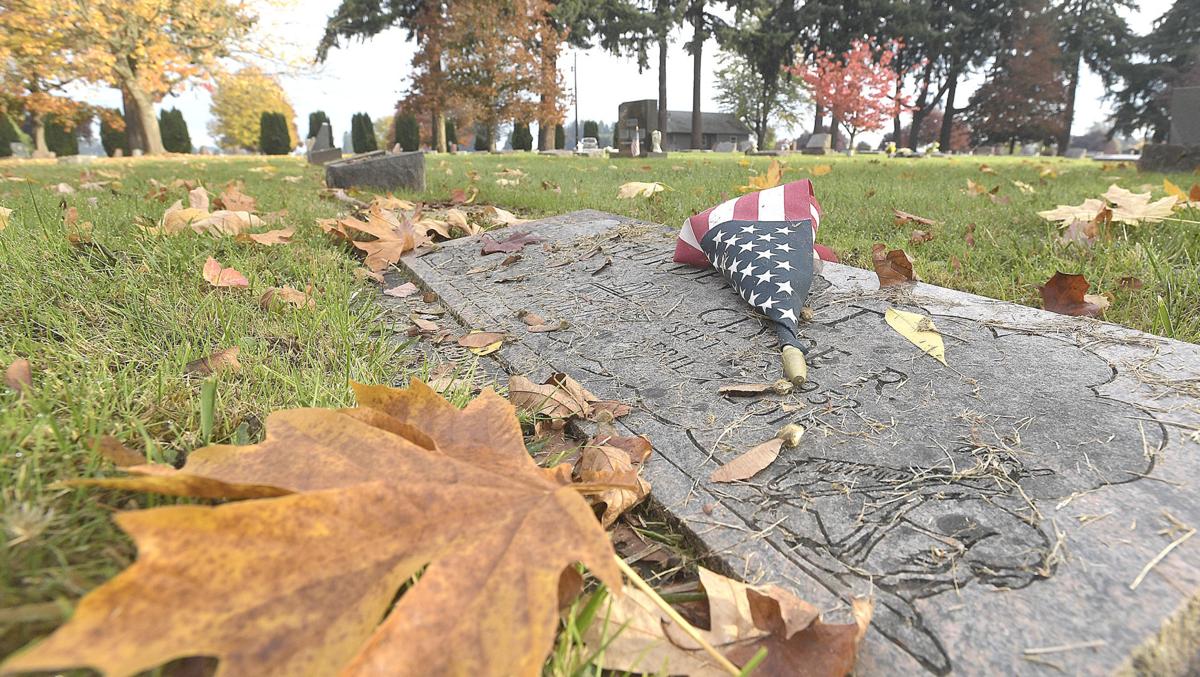 A flag rests on a grave marker at the IOOF cemetery in Lebanon.

A sign at the front of the cemetery in Lebanon posts the rules for the grounds. 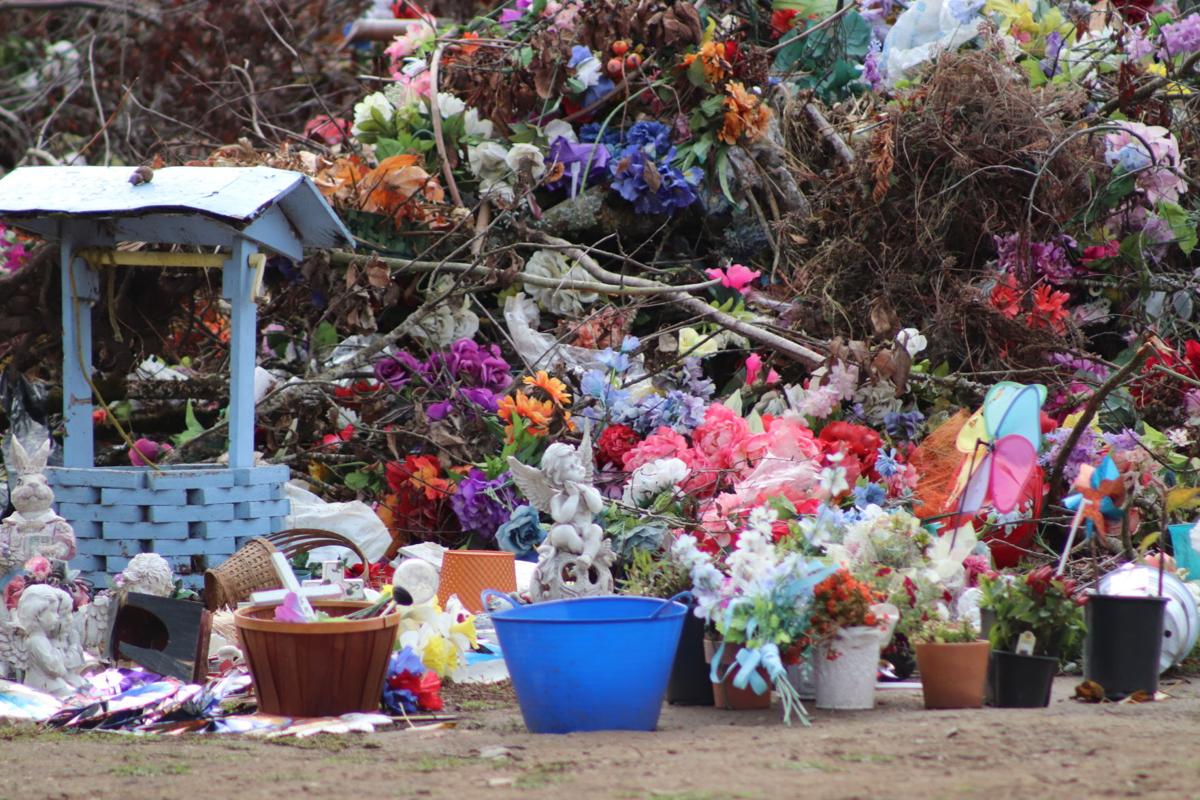 Statues and flowers were among the trashed items. 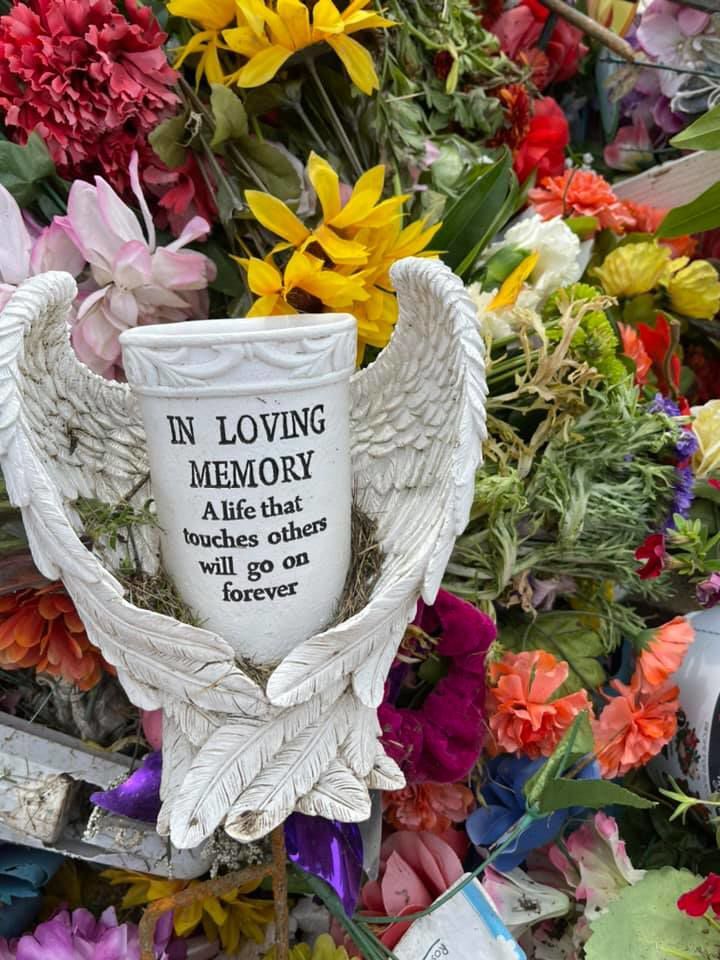 Mementos were cleared off graves and discarded. 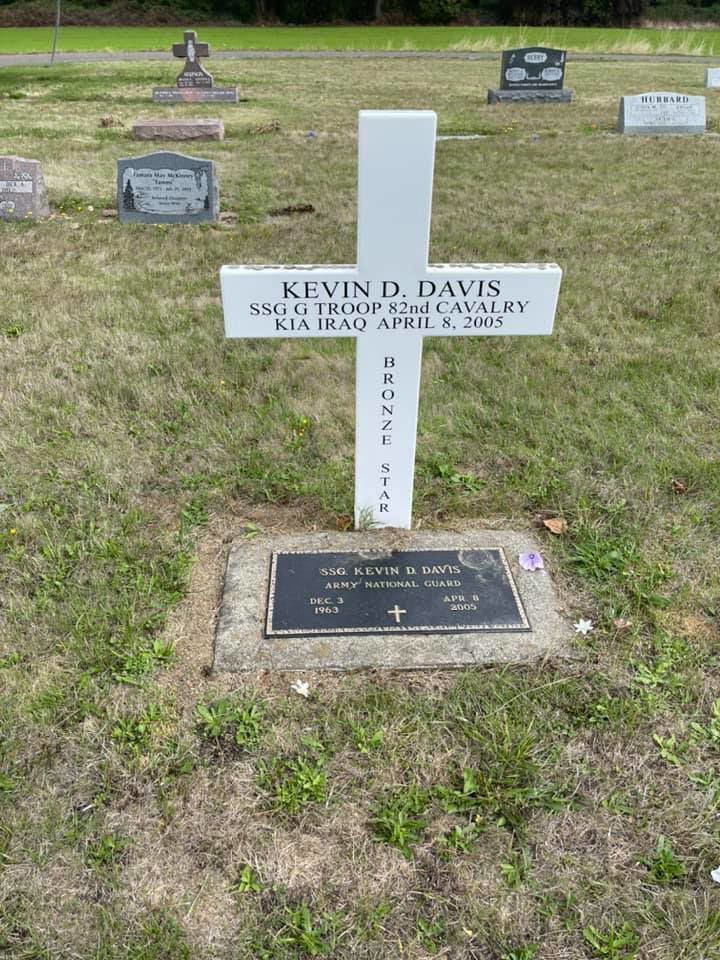 Army Staff Sgt. Kevin D. Davis was killed in action in 2005 in Iraq. 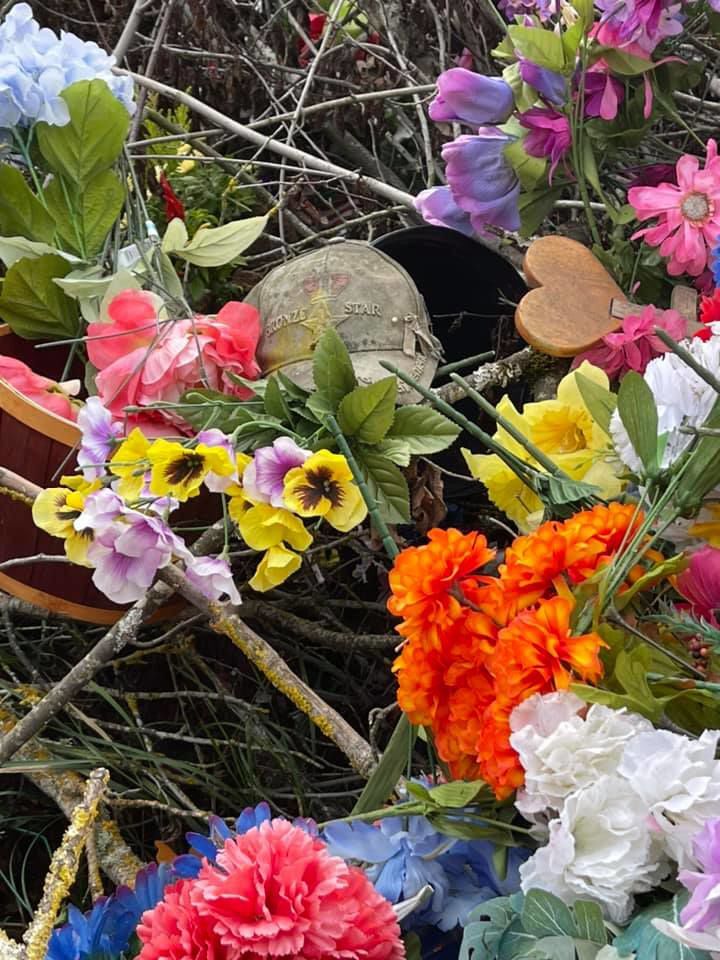 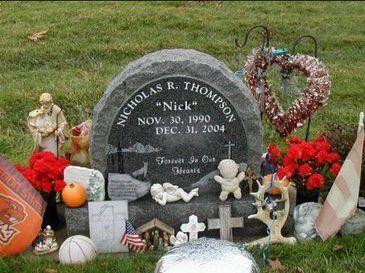 Nicholas Thompson was killed by a careless driver in 2004. 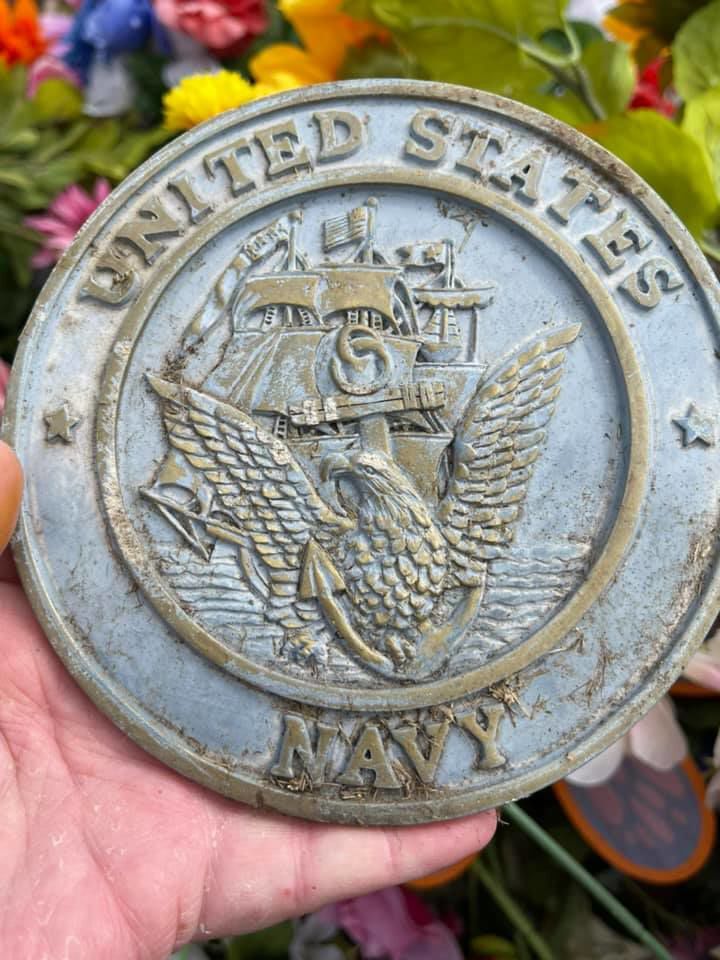 Military items were discarded as well. 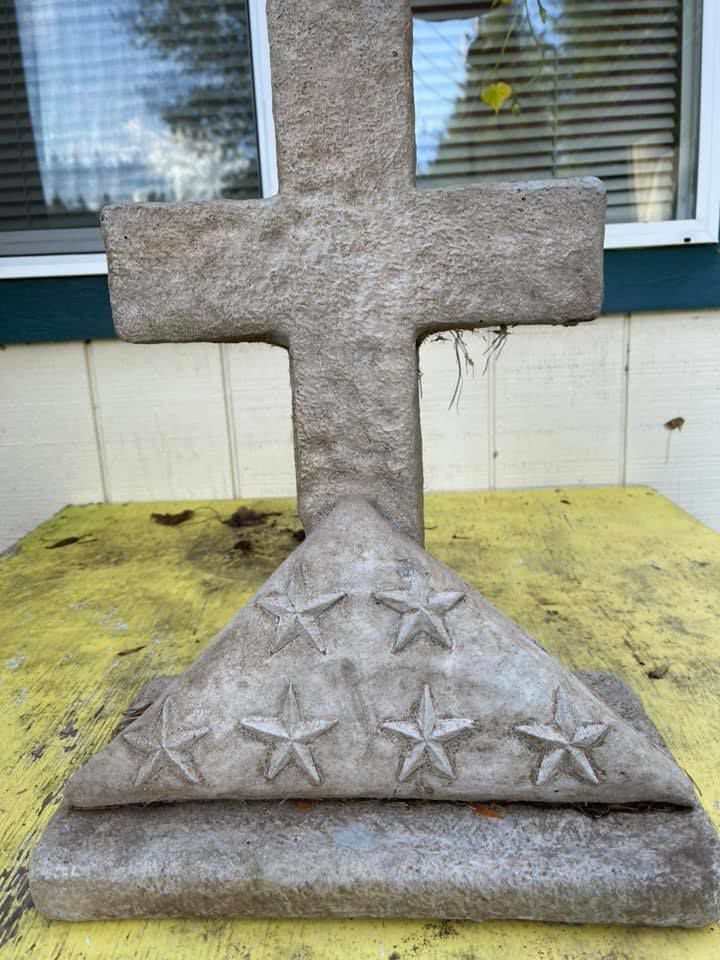 A cross and folded flag statue found in the trash pile. 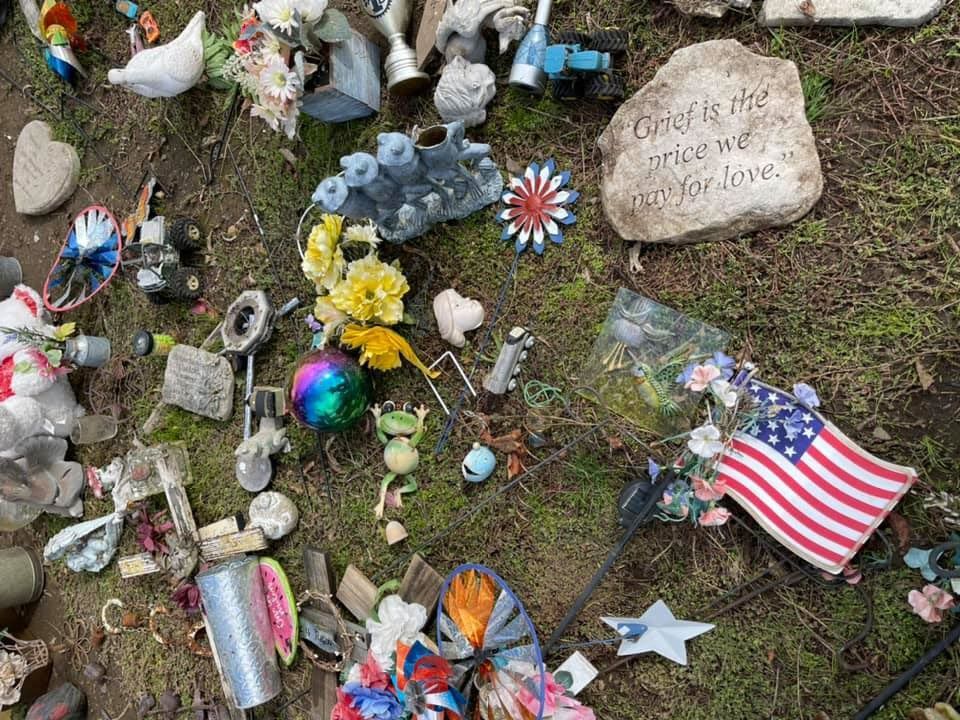 A scattering of keepsakes being sorted for hopeful recovery.

Cleanup efforts at Lebanon's Independent Order of Odd Fellows Cemetery left community members grieving recently when they discovered that tokens of remembrance left on the graves of loved ones were discarded.

The Lebanon Odd Fellows have apologized for going too far and they are working to improve communications with the community.

While there are rules prohibiting placing items that would hamper mowing and leaf-blowing, the rules have rarely been enforced in recent years, according to Robbin Davis, whose husband, Army Staff Sgt. Kevin D. Davis, is buried in the cemetery. He was killed in action in 2005 in Iraq.

When Robbin saw Kevin’s and other graves were cleared off she went into action, documenting the results of the cleanup – a dumpster filled with keepsakes and a massive pile behind a privacy fence in the back of the cemetery. Angel statues, religious crosses, inscribed stones, poems, American flags, military memorabilia and thousands of imitation flowers were trashed.

“Nothing was ever in the way of mowing,” Davis said, adding that her husband’s Bronze Star Medal hat had topped his grave for 16 years. “They literally stripped everything.”

Davis and others dug through the pile, taking to social media with photos of what they found in hopes to reconnect people with precious memories of those they lost. However, much of what was collected was damaged or destroyed in the process. Military challenge coins on several graves, a traditional sign of respect, went missing altogether.

After hearing a garbage truck was on the way one day, they raced against the clock to search the dumpster. They worked until the gates closed that night, and Davis returned the next morning at opening time, posting guard in front of the dumpster until backup arrived to finish the job.

“We just wanted to stand strong for the community,” Davis said.

Thanks to arrangement with the Odd Fellows, what items remained after days of work were set to be photographed, boxed up, cataloged and stored for a month while their fate is determined. But the damage has already been done and won’t be easily forgotten.

“There will never be a resolution,” Davis said. “People have lost things that they’ll never get back.”

“It was something I had to do,” Jones said, adding that the revelation of an overly zealous cleanup effort shook Lebanon. She said her son, Nicholas, who is buried in the cemetery, was 14 years old when he was killed in front of their house by a teenage driver who wasn’t paying attention. His carefully decorated headstone was among those that were totally cleared.

Jones used her grief to help others, becoming an advocate and supporter for those suffering from loss, particularly parents of children who died. She has spent years helping others cope through the shared tragedy of seeing a young one buried long before their time. She was the last of three to address the Odd Fellows board.

“I wanted them to know who my son was and what my son’s headstone memorial means to not just me but many people,” Jones said. “This happened 16 years ago. He has friends that still come and visit him on a regular basis.”

Elliott is the daughter of Vietnam veteran and well-known local Roy Burnsides, who is buried in the cemetery. Medals and military challenge coins on his grave, including one from her son on active military duty, disappeared during the cleanup.

“They weren’t worth a lot, but they meant a lot,” Elliott said. “All of the memories on the graves, it was all gone into a pile – all of our veterans medals, everything was in the pile. That was upsetting.”

A number of people came out to the cemetery to recover items after the women began sorting and salvaging. Elliott said they were digging for everyone, watching people in tears as they scoured for their items. Between the mud, the breakages, and the size of the mess, many went away empty handed.

“It wasn’t fair to families,” Elliott said. “It was like reliving my daddy’s death all over again.”

Davis, Jones and Elliott were admitted to an Odd Fellow’s board of directors meeting Oct. 11. The three women were among a group of protesters who gathered outside the meeting to express their anger and disappointment with the cemetery cleanup. When the board asked for someone to represent the crowd, the women came forward.

Lebanon Lodge No. 47 of the Odd Fellows, at 20 E. Ash St., owns the cemetery and operates it as a nonprofit, according to state of Oregon records.

Allen Whitmire, an Odd Fellows board member, said there has been an ongoing but overlooked issue with mementos at gravesites because “the cemetery was ignored for a long time.” He said items placed in the grass around graves make maintenance difficult, adding that informative community sessions about the issue weren’t met with much success.

With leaves dropping, Whitmire said it was time for upkeep. In addition to mowing, the leaf-blowers needed to come in. Although placing items on headstones and monuments is allowed, the blowers can blast items off the gravesites, making it even harder to mow. Fake flowers, which typically have a wire core, are only allowed during non-mowing seasons.

“We cleaned up and got a little carried away,” he said. “Because we knew the blowers were coming.”

The board admitted they went too far and apologized, Whitmire said. Going forward, there will be more advance notice of cleanups and there will be a community representative involved in the process. He noted that along with a fairly new Odd Fellows board, the grounds crew was recently replaced with professional contractors.

Jones said she appreciates that the Odd Fellows board is trying to make things right. She doesn’t blame them for the cleanup, and said since then they have been sincerely accommodating and compassionate. After telling her story to the board, she said there wasn’t a dry eye in the house.

“They were all crying,” Jones said. “I think they finally really understood where we were all coming from.”

Whitmire said the Corvallis Odd Fellows sent in a troubleshooter who is knowledgeable about cemeteries to help the Lebanon chapter in the wake of the public outcry. He said the help has been invaluable. He explained that the Odd Fellow’s creed boils down to caring for the sick, burying the dead and educating the orphan.

As part of the solution, a website has been rolled out. There is also a Facebook group to help keep the public informed about cemetery cleanups and other related events, including opportunities to volunteer.

Jones asks that the public consider registering for organ donation. Shortly before her son died, he had become an outspoken proponent of organ donation, and his organs were donated after his death.

“People have lost things that they’ll never get back.” ~Robbin Davis

LEBANON — The Lebanon Warriors jumped out to a 21-0 lead in the first 7 minutes of play Friday night against visiting Dallas.

The National Weather Services has issued a high wind advisory for the mid-Willamette Valley, including the cities of Corvallis, Albany and Leb…

We have a showcase story on the Jackson-Frazier Wetland, tons of great football galleries this week, a collection of photos from a mid-valley volleyball showdown, a video showing the process of local artist Joy Johnson, and a Mid-Valley Road Trip journey to Port Orford.

The Oregon political world is in suspended animation as court challenges of 2022 redistricting maps have been filed.

Lebanon Veterans’ Home awarded $1.7M VA grant, here's how it will be spent

A fire at a downtown Lebanon shopping center on Saturday night, Nov. 6, caused an estimated $50,000 worth of damage, though it was quickly bro…

What do we know about the Omicron variant?

A flag rests on a grave marker at the IOOF cemetery in Lebanon.

A sign at the front of the cemetery in Lebanon posts the rules for the grounds.

Statues and flowers were among the trashed items.

Mementos were cleared off graves and discarded.

Army Staff Sgt. Kevin D. Davis was killed in action in 2005 in Iraq.

Nicholas Thompson was killed by a careless driver in 2004.

Military items were discarded as well.

A cross and folded flag statue found in the trash pile.

A scattering of keepsakes being sorted for hopeful recovery.