Marching in the streets: Peaceful protesters walk through downtown Corvallis to demand racial justice
Share this
Return to homepage × 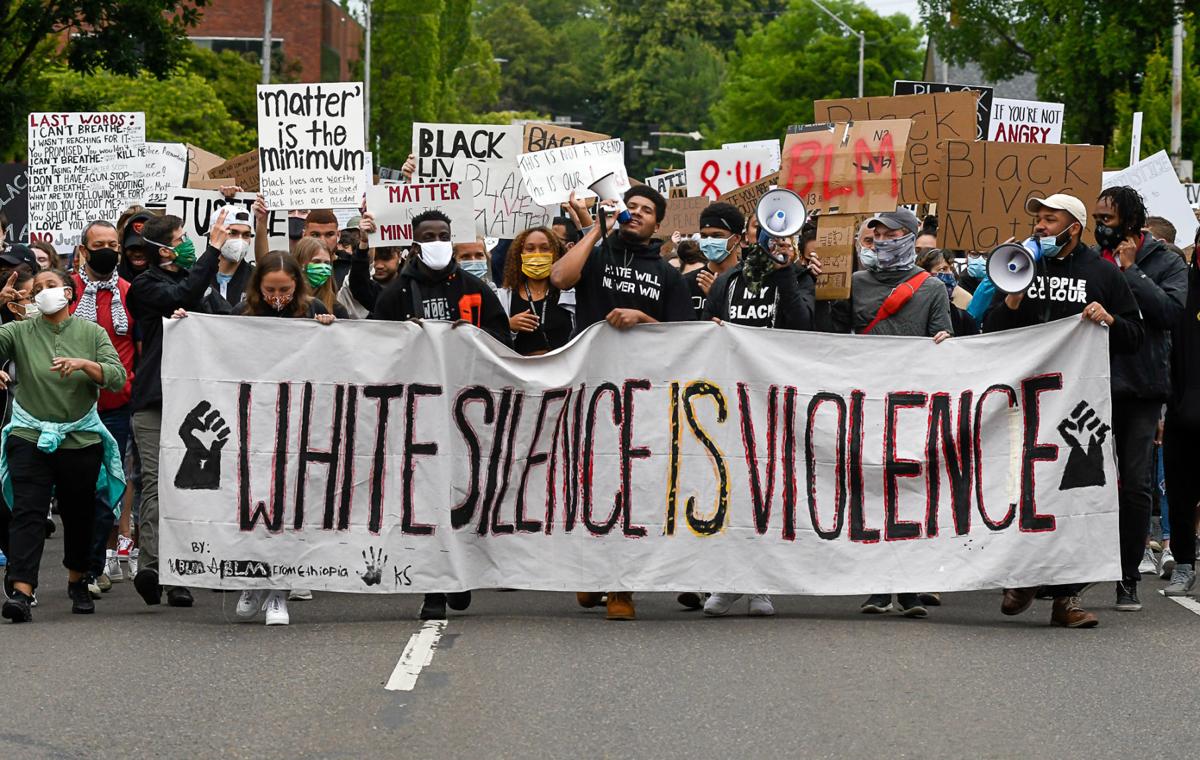 Hundreds of protesters march through the streets of Corvallis on Monday night, calling for an end to racial injustice. 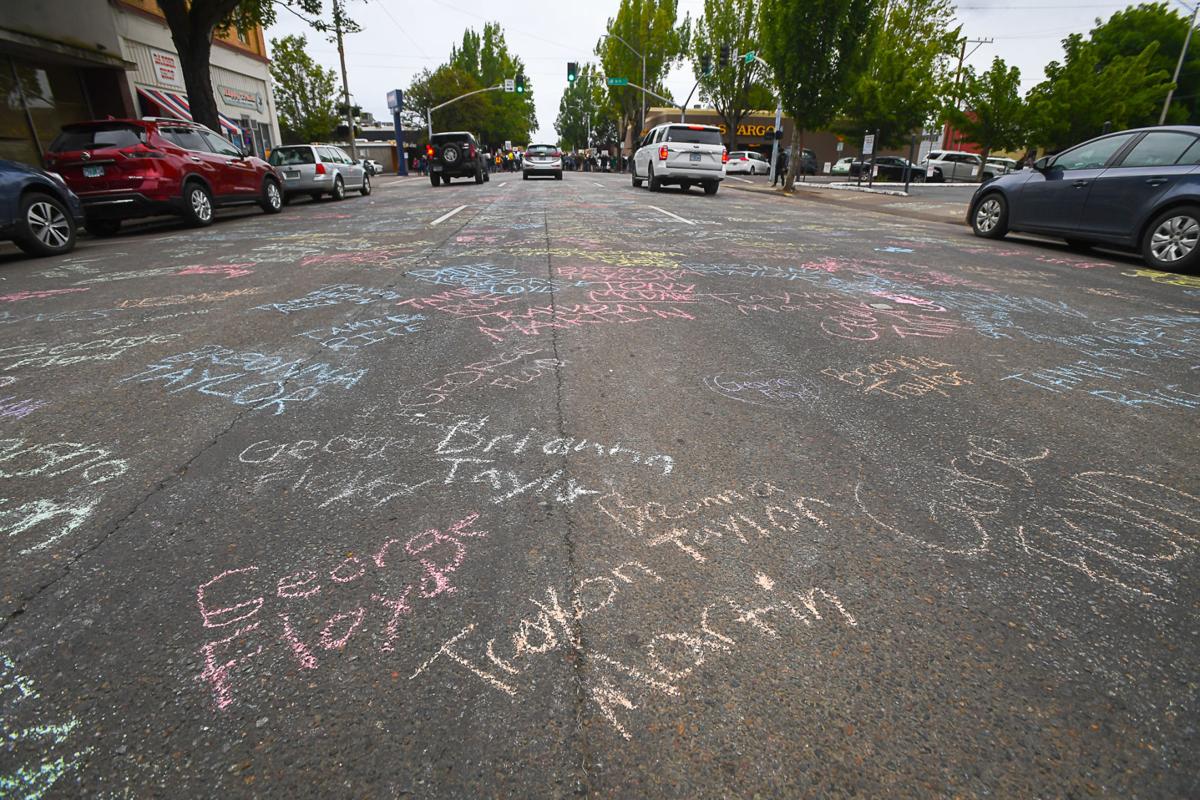 Protesters used chalk to write the names of victims on Southwest Third Street in Corvallis as they paused during a protest march on Monday. 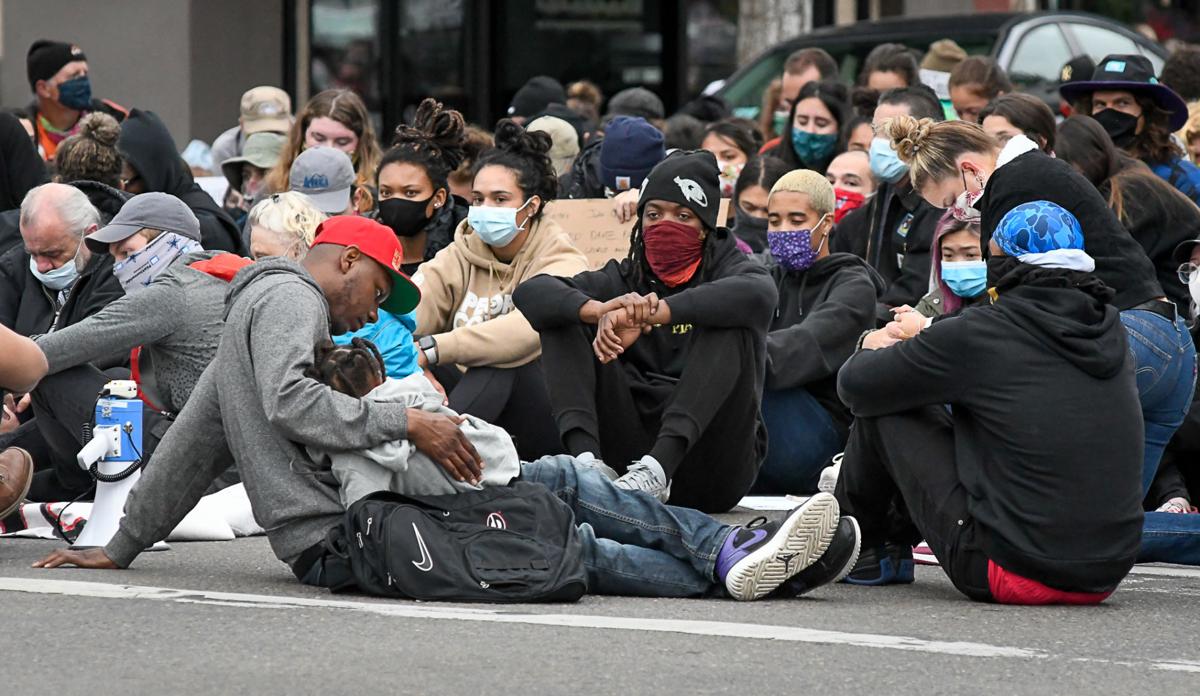 Hundreds of protesters sat or knelt in silence for 8 minutes and 46 seconds in honor of George Floyd. 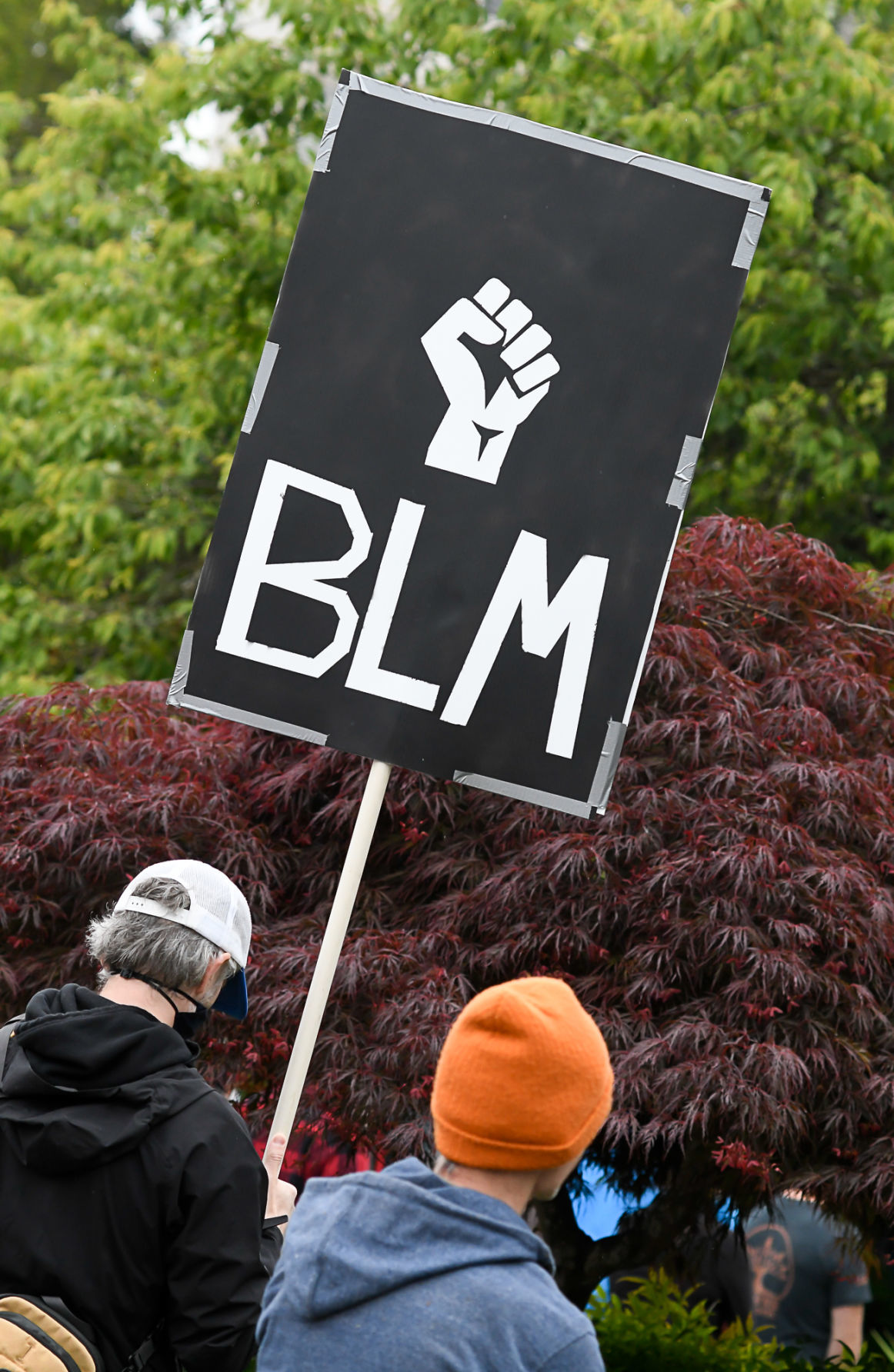 Hundreds of Black Lives Matter protesters marched through the streets of Corvallis on Monday.

Black Lives Matter protesters marched peacefully but purposefully through the streets of Corvallis for a full hour Monday night, calling for an end to institutional racism, justice for George Floyd and a sustained movement for meaningful change.

After half an hour of speeches at the Benton County Courthouse, more than 500 demonstrators spilled out onto Fourth Street at about 6:30 p.m., filling it from sidewalk to sidewalk and forcing traffic to halt as they followed a winding course through downtown.

While some other recent Corvallis protests have been larger — Sunday’s march drew more than 4,000 people, and a courthouse rally one week earlier brought out around 2,000 — this is the first that has been conducted down the middle of the city’s streets.

Carrying a banner that said “White silence is violence,” march leaders used megaphones to lead chants of “No justice, no peace,” “Hands up, don’t shoot” and “Everybody wanna be black until the cops come.”

As they walked, they also shouted out the names of black Americans who have died by violence, names that have become a rallying cry for the racial justice protests that have erupted across the nation since May 25, when George Floyd, a black man with his hands cuffed behind his back, died in police custody gasping for breath while a white Minneapolis officer knelt on his neck.

The crowd — racially mixed and almost all wearing coronavirus face coverings — stopped on Third Street at Monroe Avenue to write some of those names with colored chalk on the asphalt. Floyd’s name was there, along with those of Eric Garner, Breonna Taylor, Tamir Rice, Trayvon Martin, Ahmaud Arbery and others.

The marchers then knelt silently in the street for 8 minutes and 46 seconds, the amount of time Officer Derek Chauvin held Floyd on the ground with a knee on his neck.

As traffic backed up behind the group on the one-way street, the front rank of vehicles stopped and waited with their emergency flashers on while others turned onto a side street. One man was heard yelling at protesters to “get out of the street,” but everyone else either remained silent or honked in apparent support. There was a small police presence at the demonstration, but the uniformed officers stayed well back from the marchers as they monitored the situation.

From there the demonstrators resumed their winding course, passing the Law Enforcement Center on their way to Oregon State University’s Memorial Union Quad. The crowd appeared to swell as it moved along, growing to nearly 1,000 people by the time it reached the MU steps, where several people gave emotional speeches about the suffering inflicted by racism and the need for change.

Ricky Carson, a 2017 College Hill High School graduate who spoke to the Rotary Club of Greater Corvallis about racism on Friday, brought a roar of approval from the crowd as he read excerpts from Dr. Martin Luther King’s “I Have a Dream” speech, ending with a thunderous “thank God Almighty, I’m free at last!”

OSU football player Caleb Lightbourn talked about growing up biracial with dark skin, saying he was always perceived as black growing up — and often treated unfairly because of it.

“All these people are saying, ‘I don’t see color,’” Lightbourn said. “But it’s not how you see color — it’s how you treat color.”

Briae Lewis, who moved to Corvallis last year from Maryland, said she was impressed with the turnout for Monday’s march.

“I have never seen this many people coming out to support each other, and it’s beautiful, it’s gorgeous,” she said.

Lewis talked about her fear, as a black woman, of being killed for the color of her skin and called for an end to racial injustice.

“I’m a (expletive) American!” she shouted. “We hold these truths to be self-evident: that all people are equal. And until that promise is kept, we will keep fighting!”

Protest organizer Naveah Bray, a 2020 Corvallis High School graduate who plans to attend the University of Portland in the fall, said the demonstrators marched in the street to make a point.

Oregon’s COVID-19 case count jumped by 184 on Monday to bring the statewide total to 5,820, with 99 of those cases coming from Union County, t…

The Benton County Board of Commissioners has issued a statement condemning systemic racism, pledging to examine the county’s own shortcomings …

The Corvallis City Council unanimously passed a resolution of support for Black Lives Matter at its Monday meeting.

Hundreds of protesters march through the streets of Corvallis on Monday night, calling for an end to racial injustice.

Protesters used chalk to write the names of victims on Southwest Third Street in Corvallis as they paused during a protest march on Monday.

Hundreds of protesters sat or knelt in silence for 8 minutes and 46 seconds in honor of George Floyd.

Hundreds of Black Lives Matter protesters marched through the streets of Corvallis on Monday.