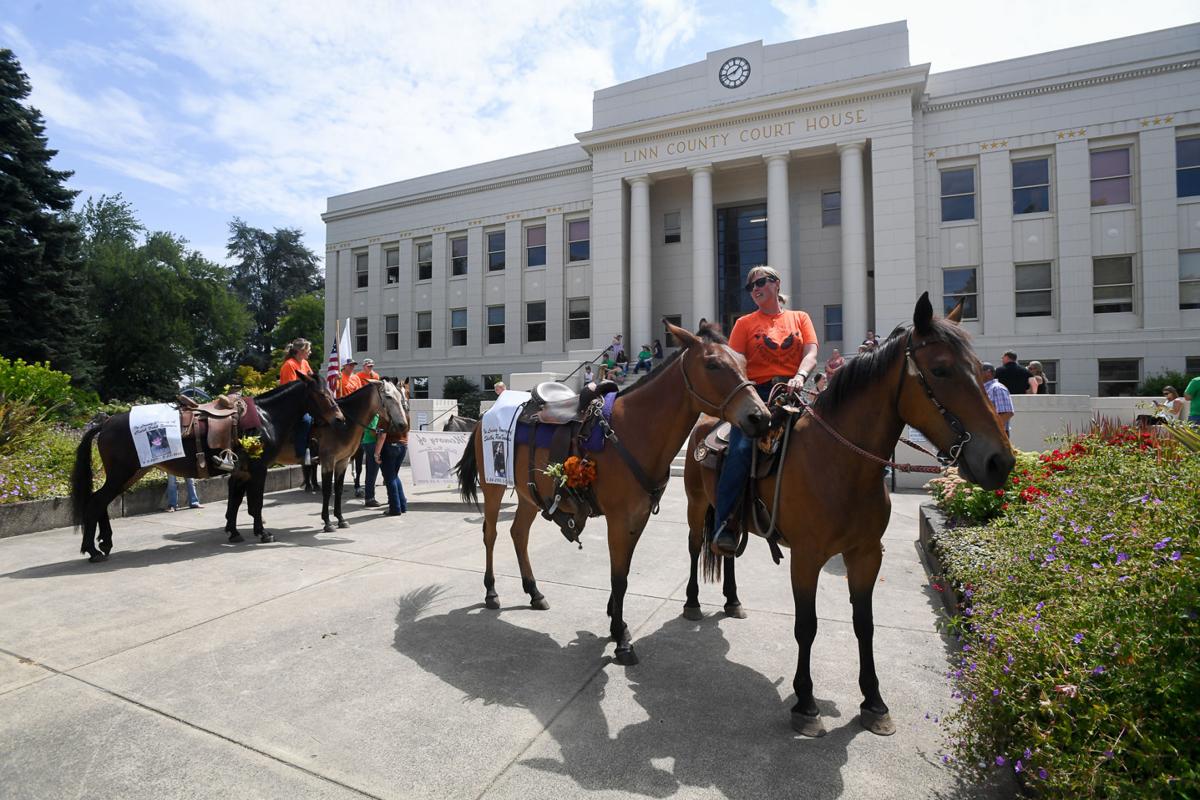 Jessica Bishop of Scio organized an empty saddle memorial for Caleb Simonis and Shelby Simonis on Wednesday afternoon during the sentencing hearing for Austyn Wayne Hillsman, who was convicted of manslaughter for killing the teens in a drunk driving crash. 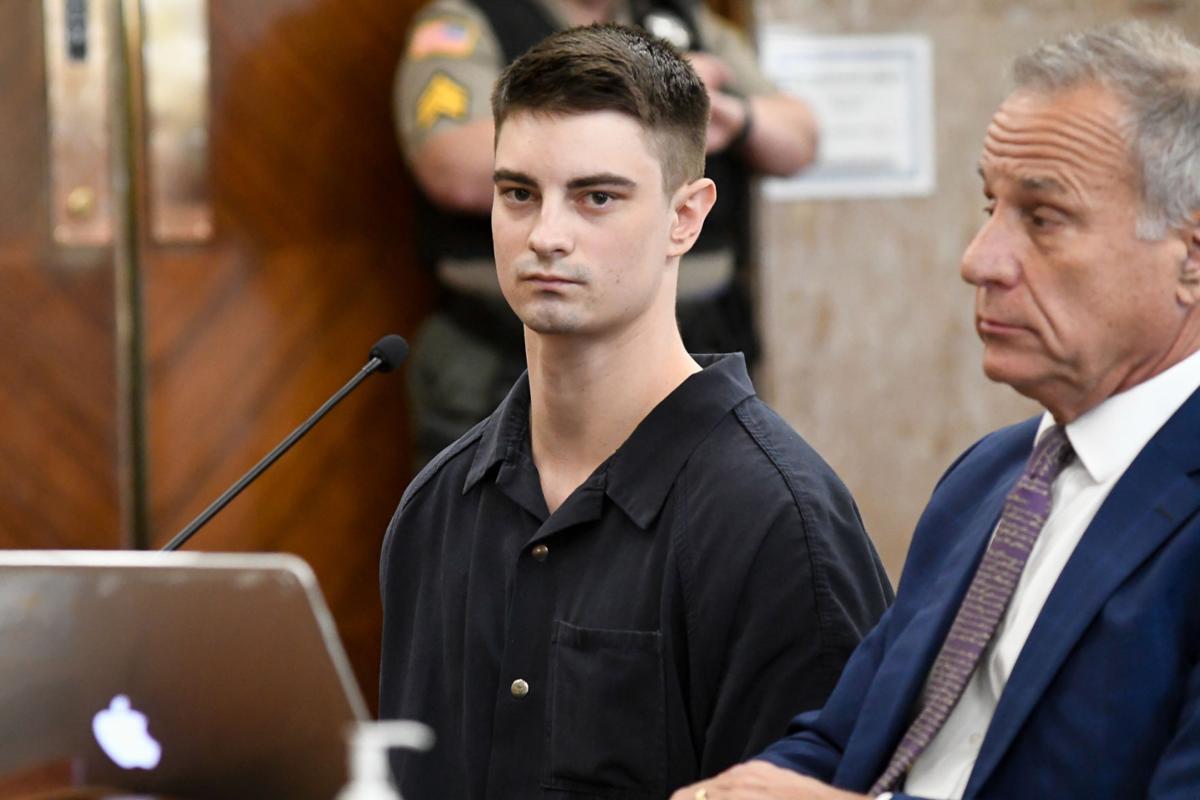 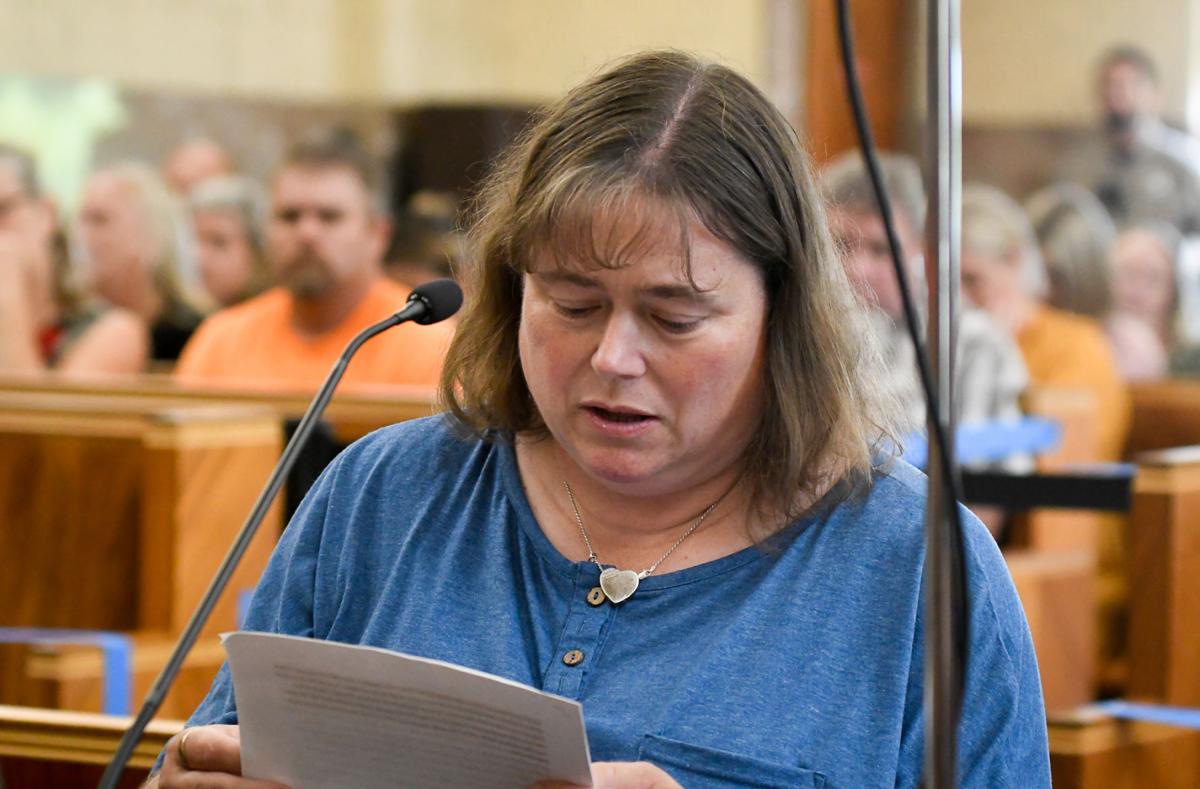 Amy Simonis read a prepared statement during the sentencing hearing for Austyn Wayne Hillsman on Wednesday in Linn County Circuit Court. Hillsman was sentenced by Judge David Delsman for two counts of second-degree manslaughter, third-degree assault, driving under the influence of intoxicants and reckless driving. 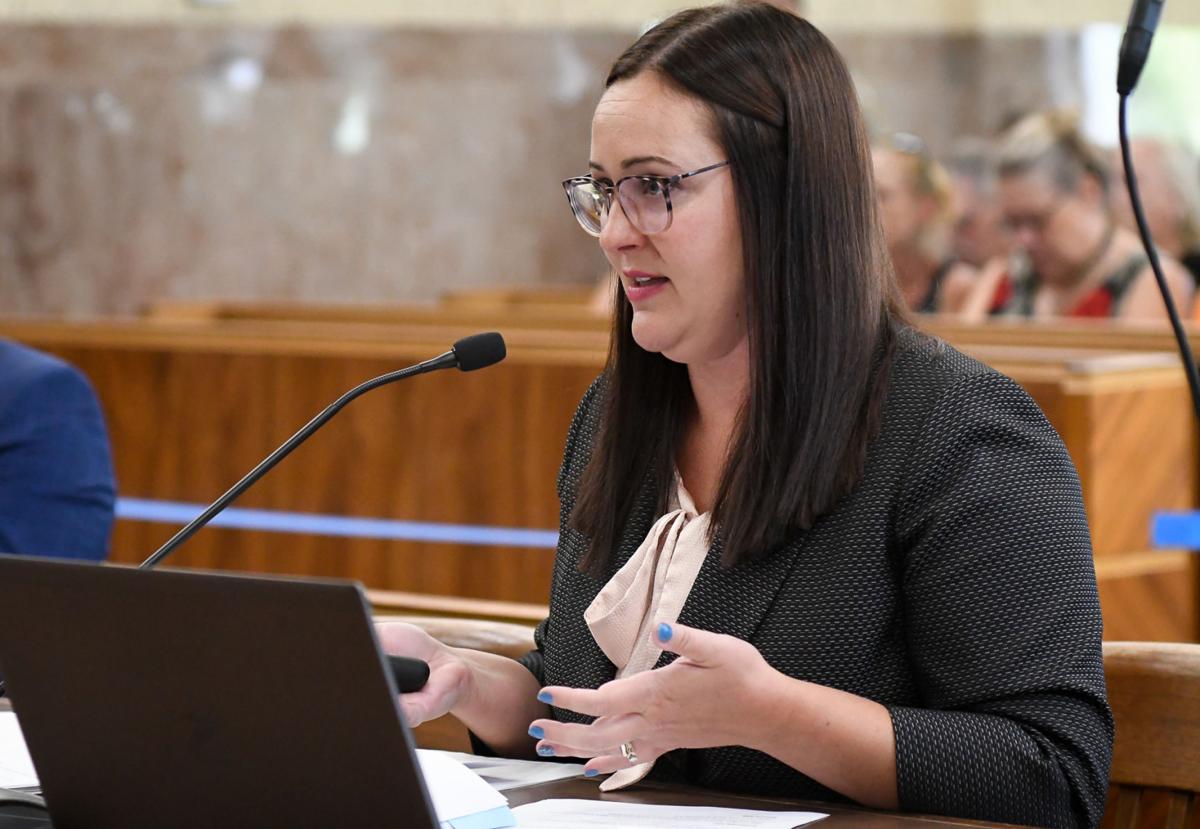 The man found guilty of killing two teens in a head-on crash east of Brownsville in May 2020 will serve 12.5 years in prison and never be allowed to drive again, a Linn County Circuit Court judge ruled on Wednesday.

Austyn Hillsman, 22, of Woodland, Washington, was found guilty by a 12-person jury in June of driving drunk on the night of May 23, 2020. The investigation and trial revealed that he was operating a Ford F-250 and swerved into the oncoming lane of Highway 228, striking a car driven by Caleb Simonis, 19. The other occupants of the stricken car were his sisters, Shelby Simonis, 16, and Kylee Simonis, then 15. The elder siblings, Caleb and Shelby, died as a result of the crash, while Kylee sustained severe injuries.

Hillsman was charged with two counts of second-degree manslaughter, third-degree assault, DUII and reckless driving, and was convicted of every charge.

The courtroom at the Linn County Courthouse in Albany was packed with family and friends of the victims, as well as supporters of Hillsman. An overflow crowd watched the proceedings on a monitor in a second courtroom.

A demonstration to show solidarity for the Simonis family took place hours before the sentencing, out on the courthouse steps and on a section of Fourth Street Southwest that was closed down. Among the attendees were family and friends and folks who were a part of the 4-H and FFA groups that the Simonis children participated in.

Shelby was an accomplished showperson of livestock at various 4-H events, including winning reserve champion for her steer at the 2019 Linn County Fair.

Caleb was a graduate of Central Linn High School and was attending Linn-Benton Community College to become a mechanic. Like the rest of his family, who lived on a small farm outside of Brownsville, he was an avid fan of animals.

Out on the sidewalk, horses, mules and goats stood vigil during the hot afternoon, and even throughout the entire sentencing proceeding. Dozens of people showed up in support of the Simonis family.

“As an outsider, you’re asking, ‘There’s got to be something I can do,’” said Jessica Bishop, who rode atop a horse. “When this opportunity came up to support them and honor them, we knew we didn’t have a choice.”

She was leading the reigns of two unmounted mules that belonged to the Simonis children. They were riderless and their stirrups held the boots of the deceased, as well as flowers and some of their favorite possessions. This traditional empty saddle tribute was performed with care and folks said it represented the family ties that all in the FFA and 4-H world feel.

Animals were a part of the teens' lives right up until the end. The three siblings were on their way to their mother’s Brownsville Animal Clinic to get their dog patched up after a fight with another canine on the night the crash occurred.

Their mother, Amy Simonis, said she felt like she was obliged to help despite the late hour of night that they requested to come down to her veterinary clinic. She wasn’t far behind them on the road as they drove to Brownsville. She came across “the devastation” a little after midnight, before paramedics had even arrived.

She and others described to the court a harrowing night as the elder Simonis children were crushed within the silver sedan, which belonged to their grandmother. Caleb died on the scene, Shelby while being transported by helicopter ambulance to Corvallis Good Samaritan Regional Medical Center. Kylee faced a difficult healing process at PeaceHealth Sacred Heart Medical Center at Riverbend in Springfield.

Another victim, Angela Clark, was the first person to call 9-1-1 that night. Hillsman had been driving recklessly behind her just prior to the accident, Clark said. During her statement to the court, she said she was terrified for her life.

“I was certain he was going to kill me,” she said. It was while on the phone with dispatchers that she saw the wreck happen in her rearview mirror, as Hillsman made one final swerve into the oncoming lane and into the car driven by Caleb Simonis.

In an interview prior to the hearing, Amy Simonis said that cases like her family’s are a reminder of why it’s so important to not drive while intoxicated. On the night that took the lives of Caleb and Shelby Simonis, Hillsman had a blood alcohol content of .23%.

“Don’t get behind the wheel if you’ve had any drugs or alcohol in your system,” she urged. “You ruin the lives of families, kids, everything.”

This wasn’t Hillsman’s first drunken collision, alleged Jozie Glynn, 22, of Sweet Home. She described getting in a separate collision with Hillsman while her husband was driving along the same stretch of Highway 228 on Father’s Day 2019. While the incident was not reported to police, she described Hillsman as slurring his words and said he admitted to having been drinking that day.

Because it went unreported, there were no charges in Linn County for that incident. But prosecutor Julia Baker highlighted it as an example of Hillsman’s pattern of reckless behavior and prior history of driving while intoxicated. Hillsman did have a prior convictions for fourth-degree assault and menacing of his then-girlfriend in Lane County in 2019.

“There’s a huge hole in the community because Caleb and Shelby are no longer there,” said Baker during her opening statements. “I’m asking the court to consider the prior actions, (Hillsman’s) actions at the scene and the community impact when making the sentencing determination today.”

Judge David Delsman handed down the sentence after hearing from the family of the victims. The surviving daughter, Kylee, was among those who addressed the court.

“The farm doesn’t have the same life that it did before Austyn Hillsman got behind the wheel,” she said. “I was so excited for their future successes, but those can’t happen anymore.”

“Two people have lost their lives and they both deserve the justice afforded by the law,” he said.

Hillsman himself spoke before the family of the victims read their statements, expressing remorse for his crimes.

“I’ve written multiple letters to this family, which, obviously, I’m not allowed to send,” Hillsman said. “I do want them to know how sorry I am for the actions — my actions — that led to this accident.”

Hillsman’s two manslaughter charges earned him 12.5 years in prison with no option for reduced time or alternative imprisonment.

Calculation of restitution in the case is being held open for 90 days while the state makes its recommendation to the court.

Gross! An up-close look at the secret world of banana slugs

A 12-person jury has found an Albany man guilty of first-degree manslaughter.

Two Idanha men were killed on Highway 22 after their car went over an embankment Monday afternoon.

Tyler Lobdell, 18, was arrested Wednesday in Sweet Home on charges of second-degree manslaughter, driving under the influence of intoxicants a…

Jessica Bishop of Scio organized an empty saddle memorial for Caleb Simonis and Shelby Simonis on Wednesday afternoon during the sentencing hearing for Austyn Wayne Hillsman, who was convicted of manslaughter for killing the teens in a drunk driving crash.

Amy Simonis read a prepared statement during the sentencing hearing for Austyn Wayne Hillsman on Wednesday in Linn County Circuit Court. Hillsman was sentenced by Judge David Delsman for two counts of second-degree manslaughter, third-degree assault, driving under the influence of intoxicants and reckless driving.