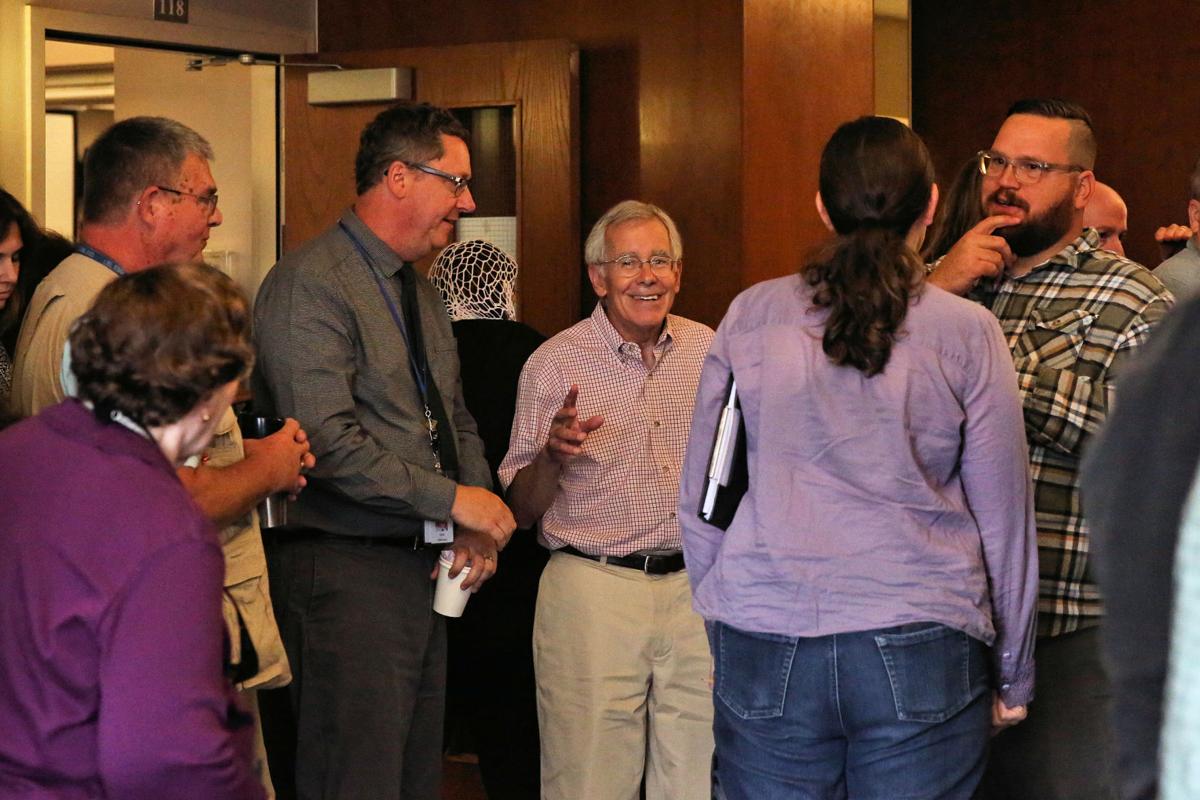 David Dowrie, center, is shown during an in-service event of the Linn Benton Lincoln Education District in 2019. Dowrie, who died last month at the age of 77, served on the district's board for 37 years. 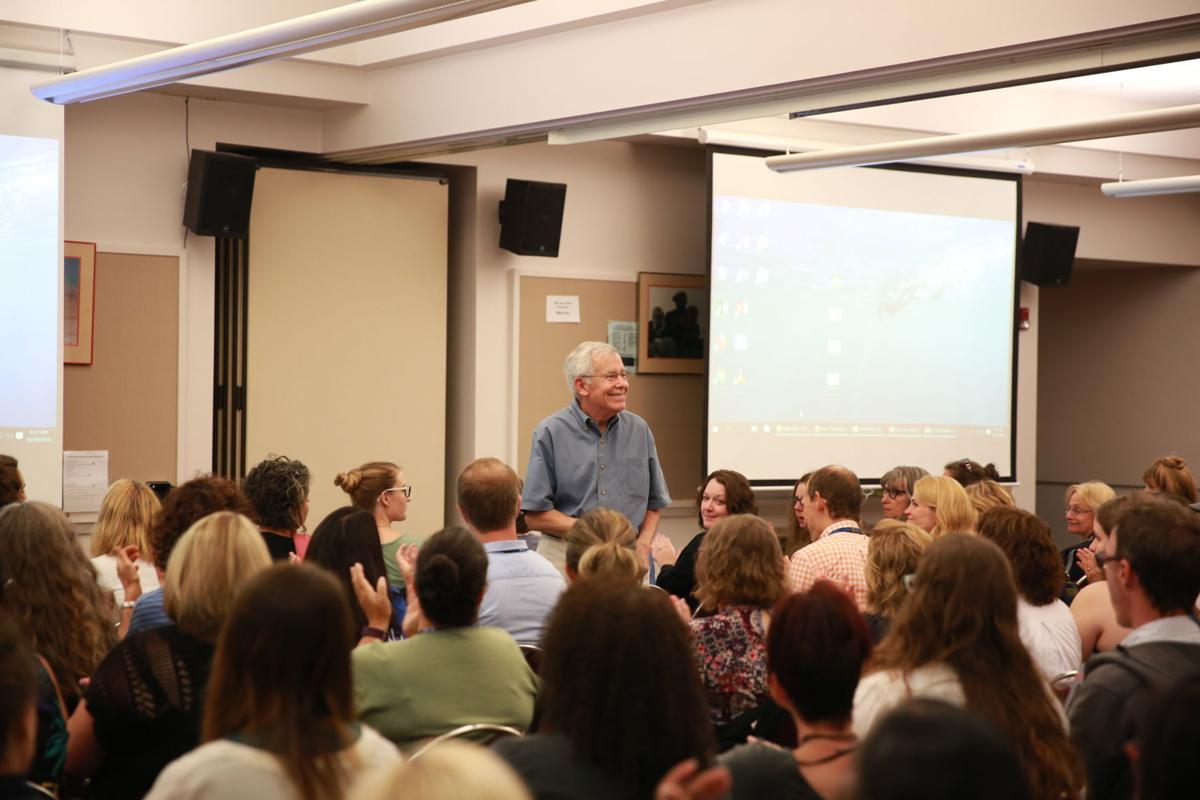 Dowrie, a Corvallis resident since 1972, served an astonishing 37 consecutive years on the board of Linn Benton Lincoln Education Service District. Dowrie, who chaired the group numerous times, was a member of the board at the time of his death.

“His goal was that he wanted to serve until he was 80 and that would have been 40 years on the board,” said Tonja Everest, superintendent of the LBLESD.

“Even though David came from a professional background in IT, his championing of students reached far beyond that,” Everest said. “He thought critically and compassionately about the impact decision-makers have on students and education. He was fully engaged and took his elected position seriously.

“We will miss David’s board leadership, counsel, advocacy and support. He was a true partner in education.”

Dowrie, who was born and educated in Illinois and came to Oregon in 1969, also played a key role in Benton County affairs, serving a total of 21 years combined on the Budget Committee and the Planning Commission.

“It was my good fortune to serve with David for his last four years on the Benton County Budget Committee,” said Curtis Wright, who also has served on the Budget Commission of the city of Corvallis.

“All those things you remember your parents telling you what a gentleman is and does, that was David Dowrie. A gentleman, through and through.”

The other term that came up repeatedly during interviews was “public servant.”

“He was the ultimate public servant,” said Mary McKay, a former superintendent and assistant superintendent with the LBLESD who worked with Dowrie from 2006 to 2018.

“He wanted to give back to the community. He was genuinely interested and asked a lot of hard questions. At the core of every decision of his was the impact on students and the district,” McKay added.

Dowrie played a role in a series of district initiatives. Everest remembers his advocacy for students with high needs such as blind and deaf students and those with “significant impairment” and his outreach to make sure the Oregon Legislature knew what issues the ESDs were dealing with.

“He wanted the Legislature to be aware of the needs of these students and how ESDs served them,” she said.

McKay remembers how Dowrie used his background in information technology to make sure the district was well-grounded in what has become a critical part of education.

“This was real early in the computer age,” she said. “He was always bringing in computers and fixing them. He was passionately interested in trying to get computers in front of kids.”

Dowrie also had a reputation as a strong analyst of budgets.

“He was a great leader on our county Budget Committee. I valued his work and enjoyed his company,” said Annabelle Jaramillo, who served 20 years on the Board of Commissioners before retiring at the end of 2020.

Xan Augerot, current chair of the commission, said Dowrie was “fair-minded and thorough.”

“He was instrumental in our work on facilities improvements and budget responsibility,” Everest said. “He wanted to make sure he was fiscally sound. He had a sharp pencil and he went through every line. Capital improvements, long-term initiatives and fiscal health … he was extraordinary.”

And he did it all with a smile on his face. Dowrie was known for wielding a light gavel, listening to all and not imposing his will.

“It wasn’t that he was reluctant to take over a meeting,” said McKay, “He was just generally interested in what people had to say. It was real important to his decisions. He would ask the questions to make sure we were well-informed.”

Benton County Budget Committee colleague Wright described him as “an excellent chair — courteous to all, polite in his questioning, and scrupulous at assuring everyone had the opportunity to ask their questions, voice their concerns.”

“He knew his role and wasn’t in it for the ego,” McKay said. “He really wanted to support students and families and the district.

“I was really sorry to hear that he had died. It was a sad day to hear that. He was an interesting and fun person to talk to. And he really loved his kids. He was really proud of them.”

WHAT IS AN ESD?

An education service district is a regional education unit in Oregon. ESDs work to provide the various school districts with a wide array of educational programs and services, many of which are too costly or limited in demand for a single location.

Education: Bachelor’s from Shimer College in Mount Carroll, Illinois, in 1967.

Services: There will be an 11 a.m. celebration of life at Our Lady of Perpetual Help St. Mary’s Catholic Church, 815 Broadalbin St. SW, Albany. In lieu of flowers contributions to Love INC of Benton. Fisher Funeral Home (wwww.fisherfuneralhome.com) is handling the arrangements.

Ed Junkins has left the Corvallis City Council — and Corvallis — and he leaves behind a large hole to be filled, say his fellow councilors and…

A Washington man has been sentenced in a multimillionaire fraud scheme that involved grass seed at facilities in Albany and Jefferson.

Eight athletes and four coaches/administrators will make up the inaugural Hall of Fame class for Linn-Benton Community College.

David Dowrie, center, is shown during an in-service event of the Linn Benton Lincoln Education District in 2019. Dowrie, who died last month at the age of 77, served on the district's board for 37 years. 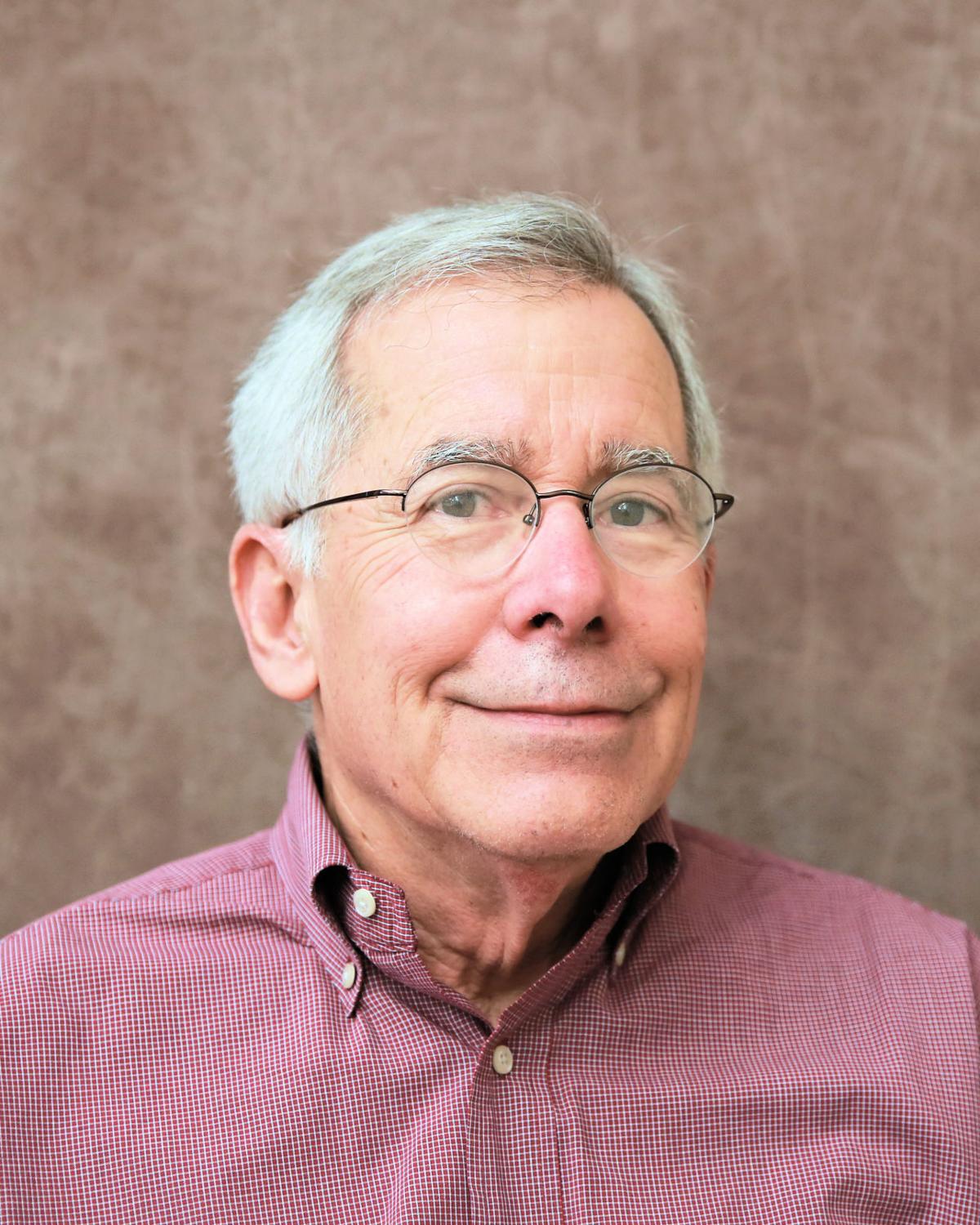