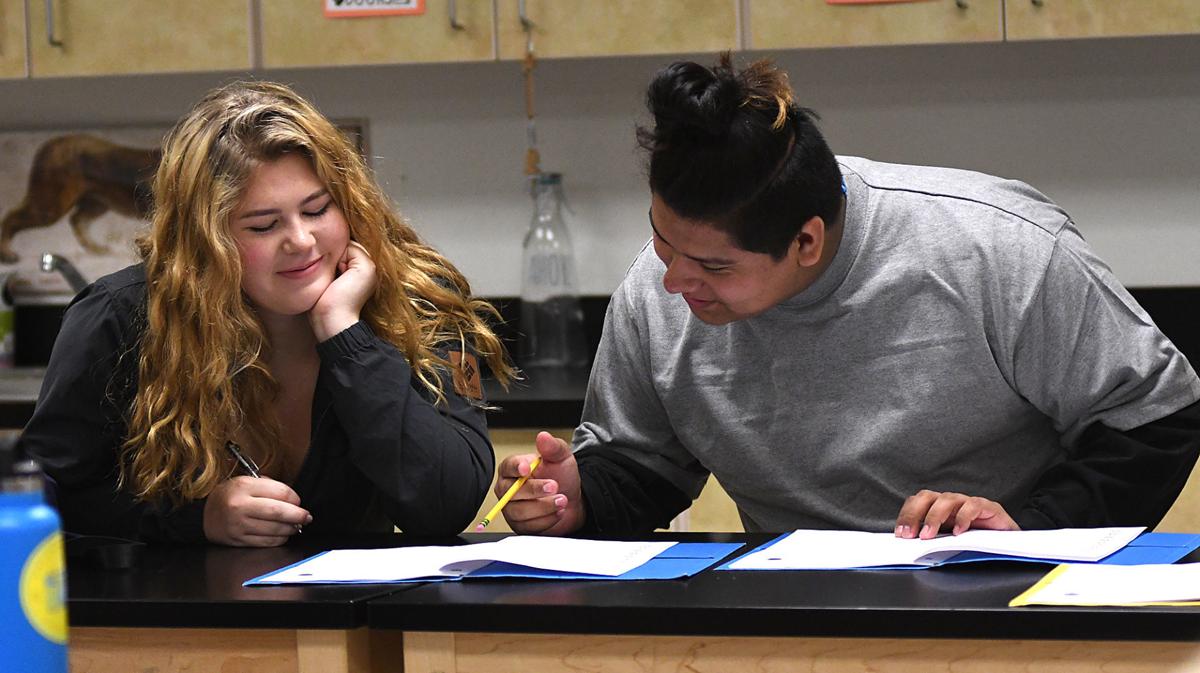 Albany Options School students Journey Leach, left, and Angel Padilla work on a project in their science class. Leach, who entered the school partway through her junior year at South Albany, is on track to graduate in December. Padilla has attended since enrolling in the school's Choices program while a freshman at West Albany. He's set to graduate a year ahead of schedule. 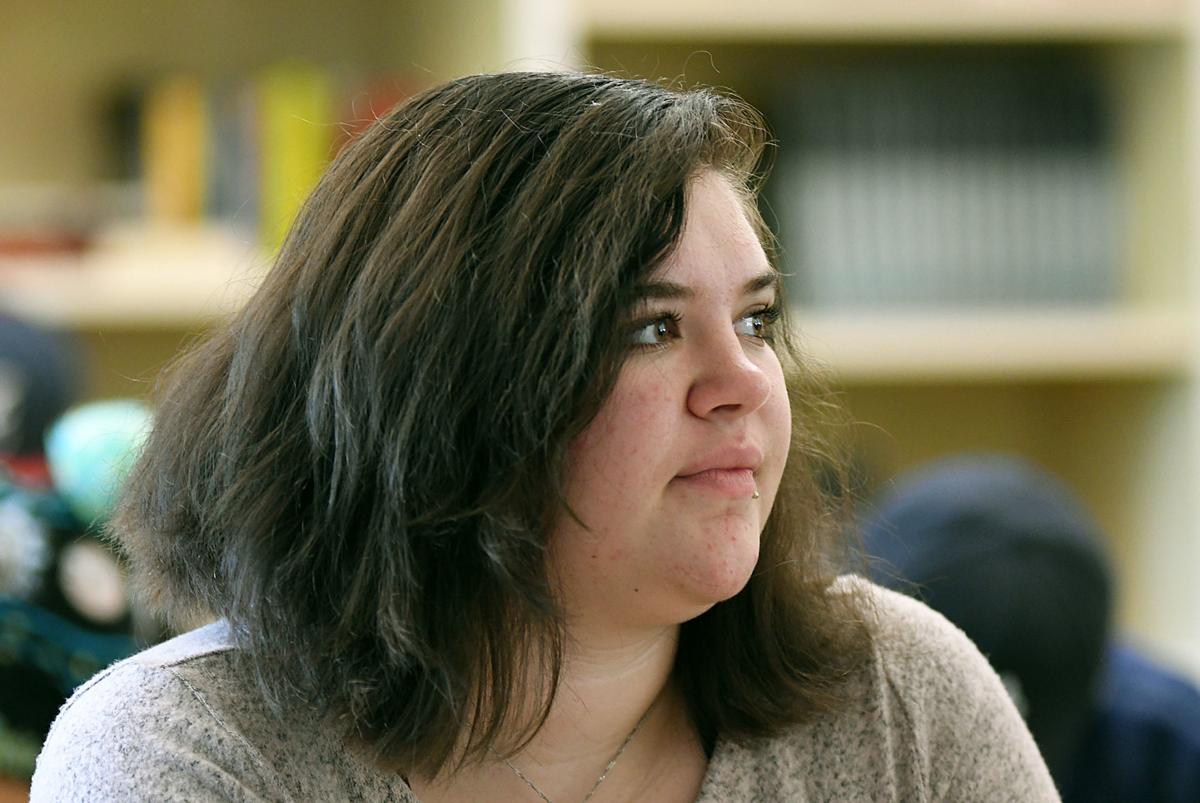 Aspen Ortega, who left South Albany at the beginning of her junior year, enjoys the atmosphere at Albany Options School. "It's a super warm, open environment where people can come and they just feel like it's peaceful," she says. 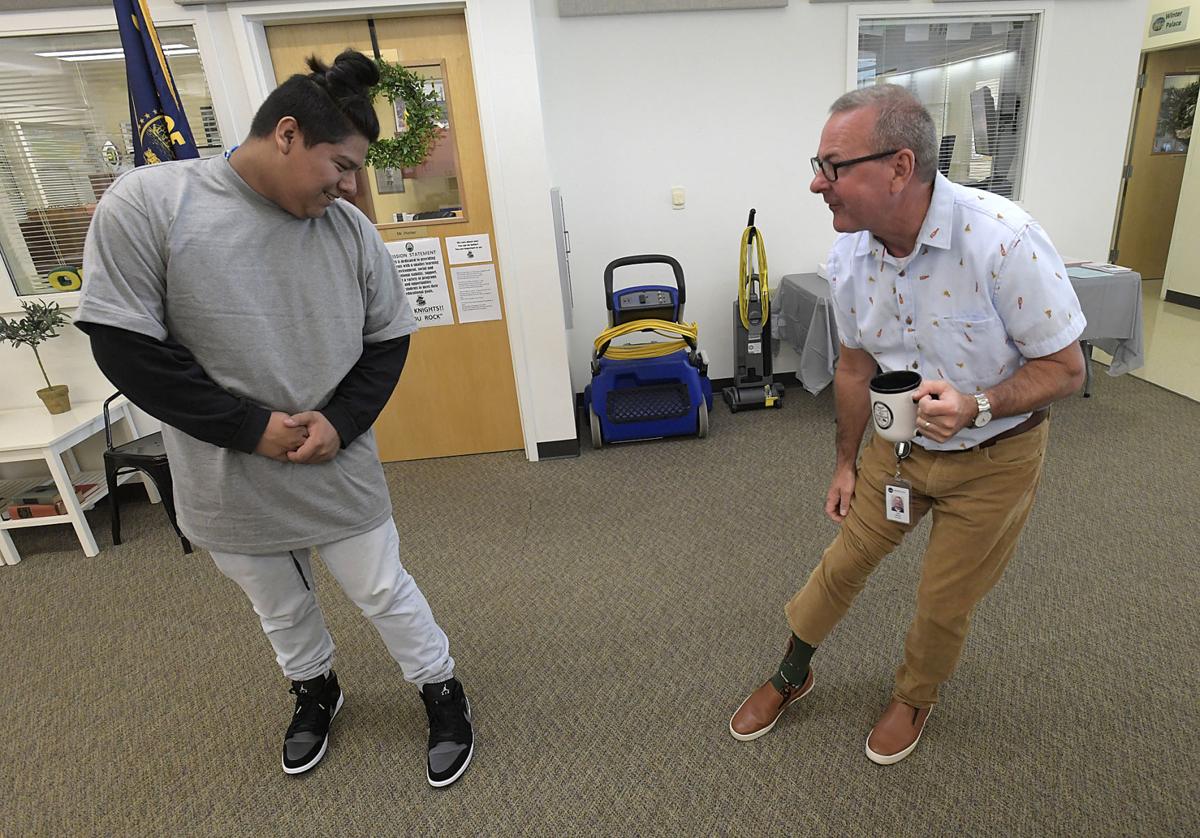 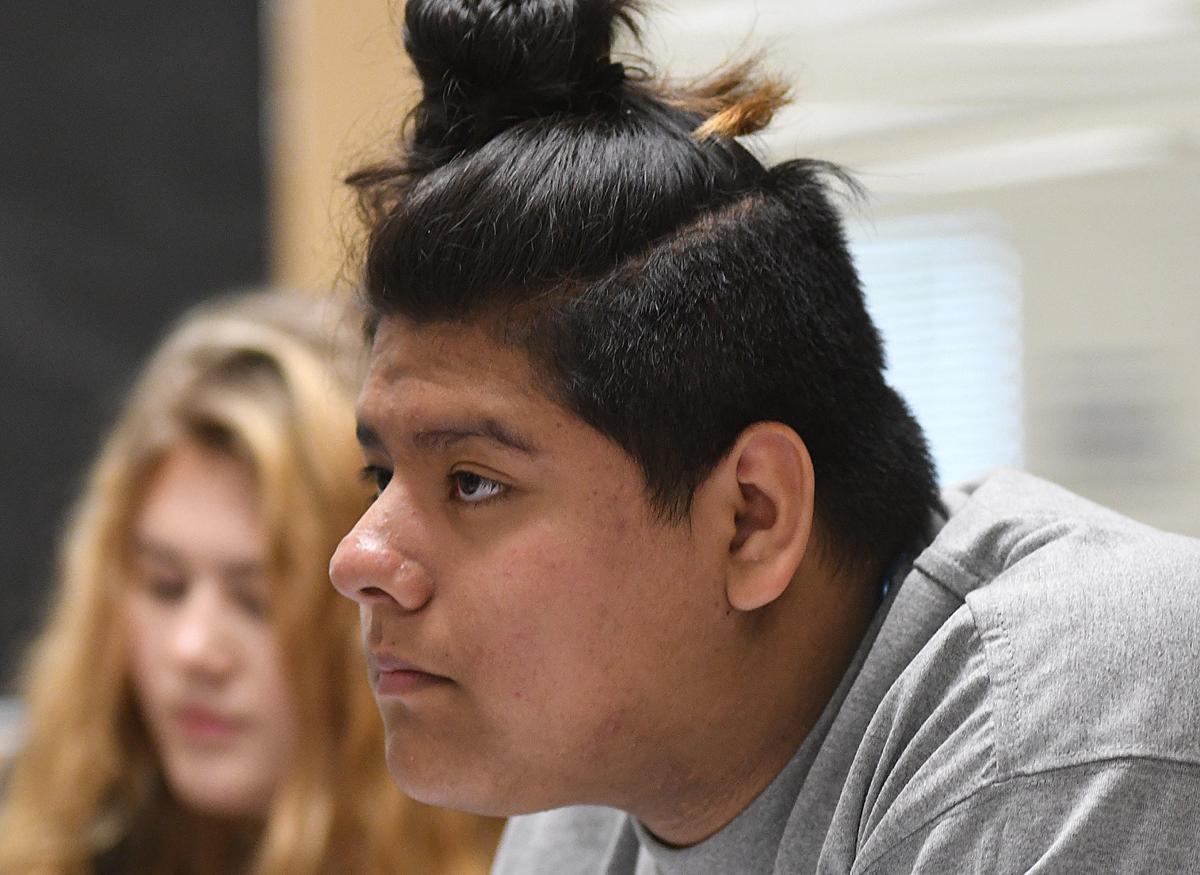 Angel Padilla listens to a question during his science class. "Everybody helped me get my work done, kept me on track," he says of his time at Albany Options School. "If I ever need help with something, everyone, anyone, will help me."

“There’s the old stigma that this is the bad kids' school,” Albany Options School Counselor Anna Harryman said on the second day of school in the wide-open space of AOS.

There are no walls between classrooms. Instructors teach math within earshot of science experiments, and the classic literature of English lessons provides a soundtrack for history classes just a few feet away. And Harryman roams freely, checking in with students who arrived here one of four ways: they’ve opted to earn their GED, did not graduate within four years, are credit-deficient or have been expelled from one of Albany’s two comprehensive high schools.

“The majority of the students came to us because they fell through the cracks,” Harryman said. “They need a little bit more help. It’s common that I’ll send an email in the morning to all the teachers saying ‘so-and-so is having trouble.’ It’s hard to struggle in our school because we catch it. We joke that it takes effort to fail classes here.”

In 2009, the AOS class, made up of 10 students, was the first to graduate from the building on 19th Avenue. Last year, AOS had 75 graduates.

“I think it shows the growth and that this works,” Harryman said. “And that these kids aren’t bad; they just need more help.”

While Harryman and AOS staff note a clear perception in the community that AOS houses the "bad kids" — kids who have gotten in trouble at other schools, found themselves expelled or otherwise proved unable to complete their work at a “normal” high school — AOS actually has kids like Angel Padilla, who will graduate a year early, and the thriving Aspen Ortega, who earns good grades, and Journey Leach, who came to AOS for a safe place to learn.

They, along with the other 105 students at AOS, will work toward graduation or their GED under the school’s 2019-2020 theme: legacy. And as they do, they’ve allowed readers to follow along on their journey to prove they’re just like everyone else.

Principal John Hunter can stand at his office window and see just about every single student in the school. So it was unusual that, last Wednesday, his door was closed. Had he closed his blinds, too, he says, students’ faces would have started to appear pressed against the opposite window.

It’s part of his approach at AOS, where it’s hard not to be a constant presence. The school is small, just one story, and as soon as students make it through the front door, they’re nearly standing in their classrooms, separated from the entrance by only a front desk and Hunter’s office.

“We had a new kid and I thought, ‘I’m going to connect with him right away,’” Hunter said. His constant presence, however, was noticed by the student, who was concerned about the principal following him around.

“That’s what they don’t get,” Hunter said. “That we’re so small that even when I’m not on them, we’re close. There’s only one drinking fountain. There’s only so many places we can be.”

The connection to teachers and administration, however, is a vital part of how AOS works. In a comprehensive high school, students may not see their principal regularly. But at AOS, Hunter is a constant presence.

And for the majority of the students, it works.

“It’s the relationships that keep students trying,” Harryman said. “It keeps them coming back and keeps them going.”

For Angel Padilla, Harryman’s theory rings true. To enroll at AOS, students need a referral from either South Albany or West Albany high school, unless they’ve been expelled or are a fifth-year senior. Those students are automatically funneled to AOS. But rarely does the school take on a freshman.

“Our priority is always to help children graduate,” Harryman said. “So we take seniors first because they have the least amount of time to finish.”

The school is also limited in the number of students it can take on. AOS classes are capped at 15 students. The smaller sizes are important to the success of students who didn't thrive in classrooms with 30 others.

“I was getting in trouble at my old high school,” he said.

Just before the last term of his freshman year at West Albany, he was expelled and given two options: online school or AOS.

Padilla enrolled in the Choices program — a foot in the door AOS offers to expelled students to earn their way into the high school. Those who earn a shot are transitioned into the AOS high school program every six weeks.

“I just got used to it fast,” Padilla said of his first few days at AOS. “I went to my class and did my work. I wanted to respect everyone because it was my first day here. I didn’t want to be a jerk or anything and be like, ‘I’m too good for this school.’”

Now in his third year, Padilla is a year ahead in his credits and is expected to graduate in June. His mother was so impressed by his change in attitude and success that when his older brother also ran into issues at school, the family opted to try for a referral to AOS. He graduated from the school last year — also as a junior.

“Everyone helped me get my work done, kept me on track,” he said. “If I ever need help with something, everyone, anyone, will help me. There’s support here. They actually made me want to come to school and get my work done. Everyone’s so nice and respects each other.”

Respect is fundamental to Aspen Ortega’s AOS experience. She left South Albany High School at the start of her junior year after running into an issue with bullying.

“It’s a super warm, open environment where people can come and they just feel like it’s peaceful and everyone is friends and there’s no fighting or problems,” she said. “You can’t get bullied here because it’s open and you can see everything.”

When she first arrived last October, Ortega struggled slightly with attendance and grades. But by the end of the year, Harryman said she was back on track.

“I decided I wanted to graduate,” Ortega said of the change. And if she remains on her current track, she will graduate this June.

So will Journey Leach.

In 2008, AOS moved to the building on 19th Avenue in Albany after existing as a combination of programs, including night school, at West Albany High School. The school made the move under principal Candy Baker.

Baker died in March 2016, but Harryman and Hunter say her presence still is felt at AOS.

This year, maybe even more: Leach is Baker's granddaughter. She's preparing to graduate from the school as part of its legacy year.

She came to AOS last year as a junior partway through the school year at South Albany. She's on track to graduate early in December, and armed with a diploma, she'll enroll at Linn-Benton Community College, where she plans to study business.

Harryman said Leach’s success at AOS is indicative of the nature of the school: It’s looked upon a certain way on the outside, but internally, it’s providing a much-needed service to kids who need a little extra support.

"When people picture an alternative school they picture something specific," Harryman said. "But that's not what AOS looks like and not how it functions. The image people have isn't our reality."

This is the first in a series of stories that will follow three students at Albany Options School, Albany's alternative high school, as they work towards graduation in the school's legacy year.

Students of Greater Albany Public Schools traded in their summer and headed back into the classroom on Tuesday for the 2019-2020 school year.

On a rainy Thursday morning in the last breath of summer, the gym at Timber Ridge Elementary School was alive with the sounds of an old-fashio…

Imagine living in poverty, said Amanda Makepeace, the adult literacy program coordinator for a new program coming to the mid-valley.

The day at the new Oak Grove Elementary School in Albany ended Thursday with a tour, but it started with a thank-you.

The banner outside Pioneer Christian Academy promises a fall 2019 opening. And just behind the Brownsville Community Garden, there are, in fac…

Albany Options School students Journey Leach, left, and Angel Padilla work on a project in their science class. Leach, who entered the school partway through her junior year at South Albany, is on track to graduate in December. Padilla has attended since enrolling in the school's Choices program while a freshman at West Albany. He's set to graduate a year ahead of schedule.

Aspen Ortega, who left South Albany at the beginning of her junior year, enjoys the atmosphere at Albany Options School. "It's a super warm, open environment where people can come and they just feel like it's peaceful," she says.

Angel Padilla listens to a question during his science class. "Everybody helped me get my work done, kept me on track," he says of his time at Albany Options School. "If I ever need help with something, everyone, anyone, will help me."