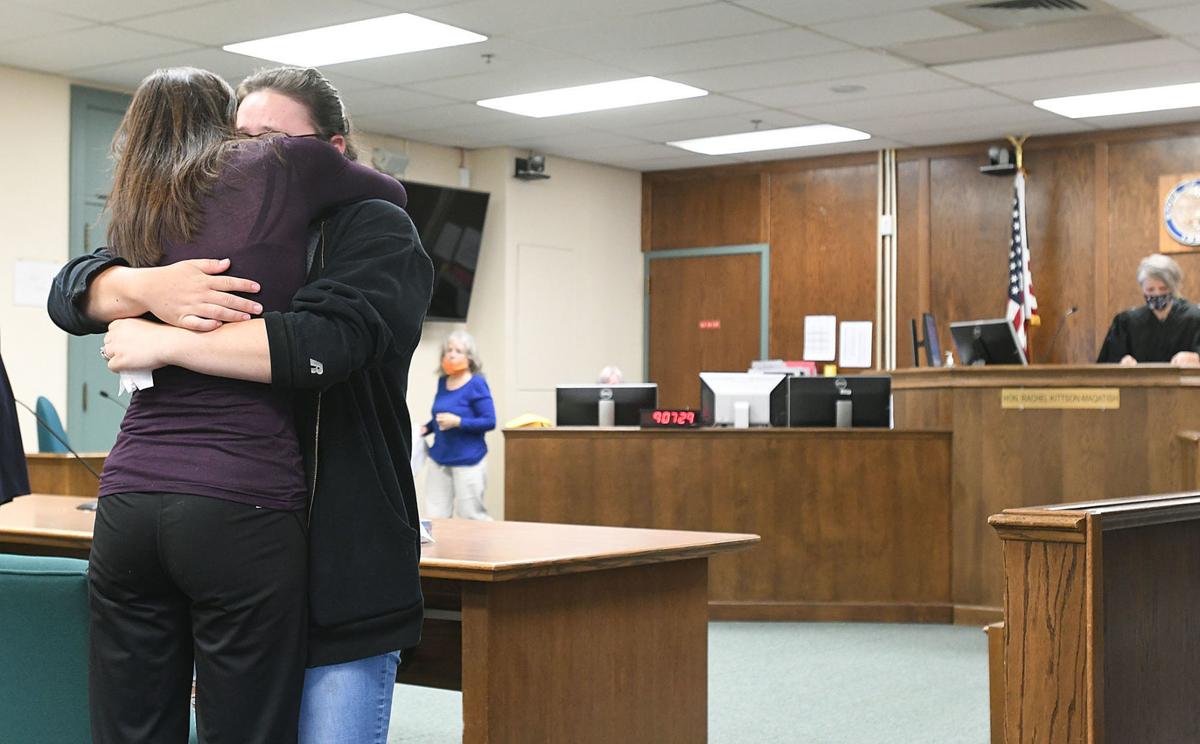 Miranda Carnes hugs a supporter before being taken into custody to start an 11-month sentence for criminally negligent homicide in the 2018 death of Sarah Watson in a traffic crash. Carnes, who was a student at West Albany High School, didn't stop at a stop sign on Tangent Drive at Seven Mile Lane and hit Watson, who was traveling northbound on a motorcycle. 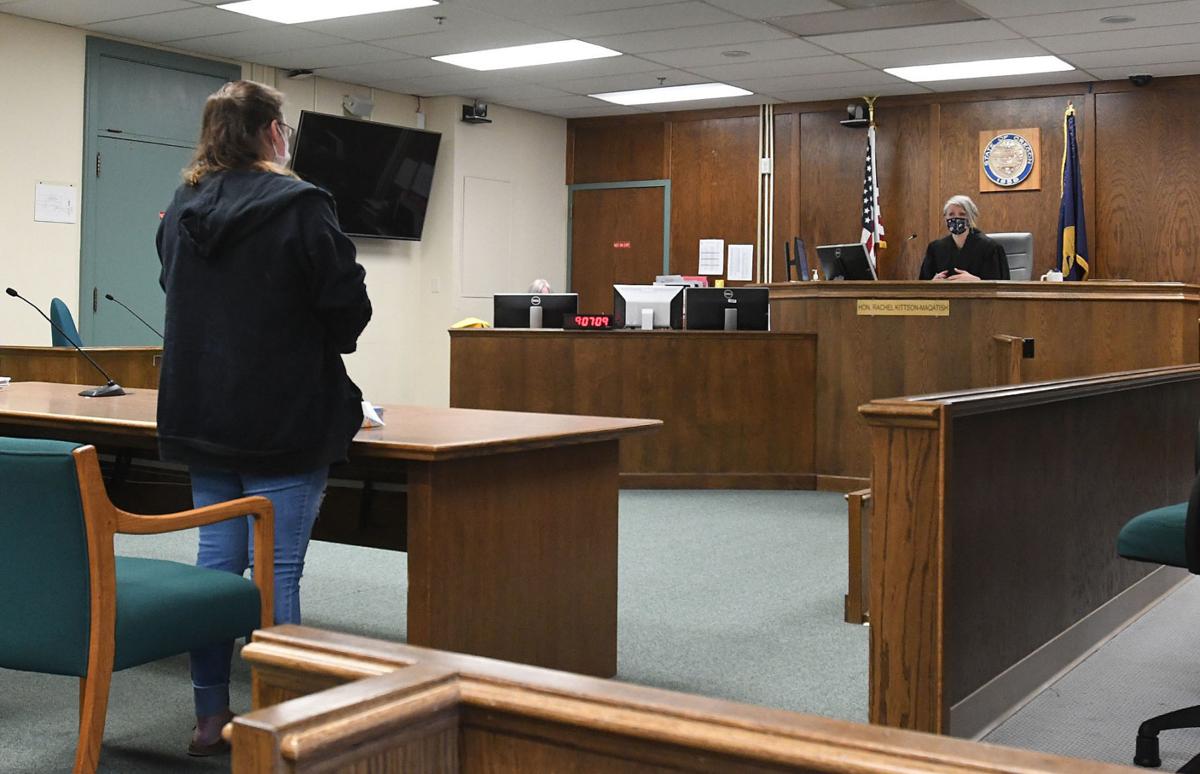 Judge Rachel Kittson-MaQatish talks to Miranda Carnes after sentencing her to 11 months in prison in the death of Sarah Watson. 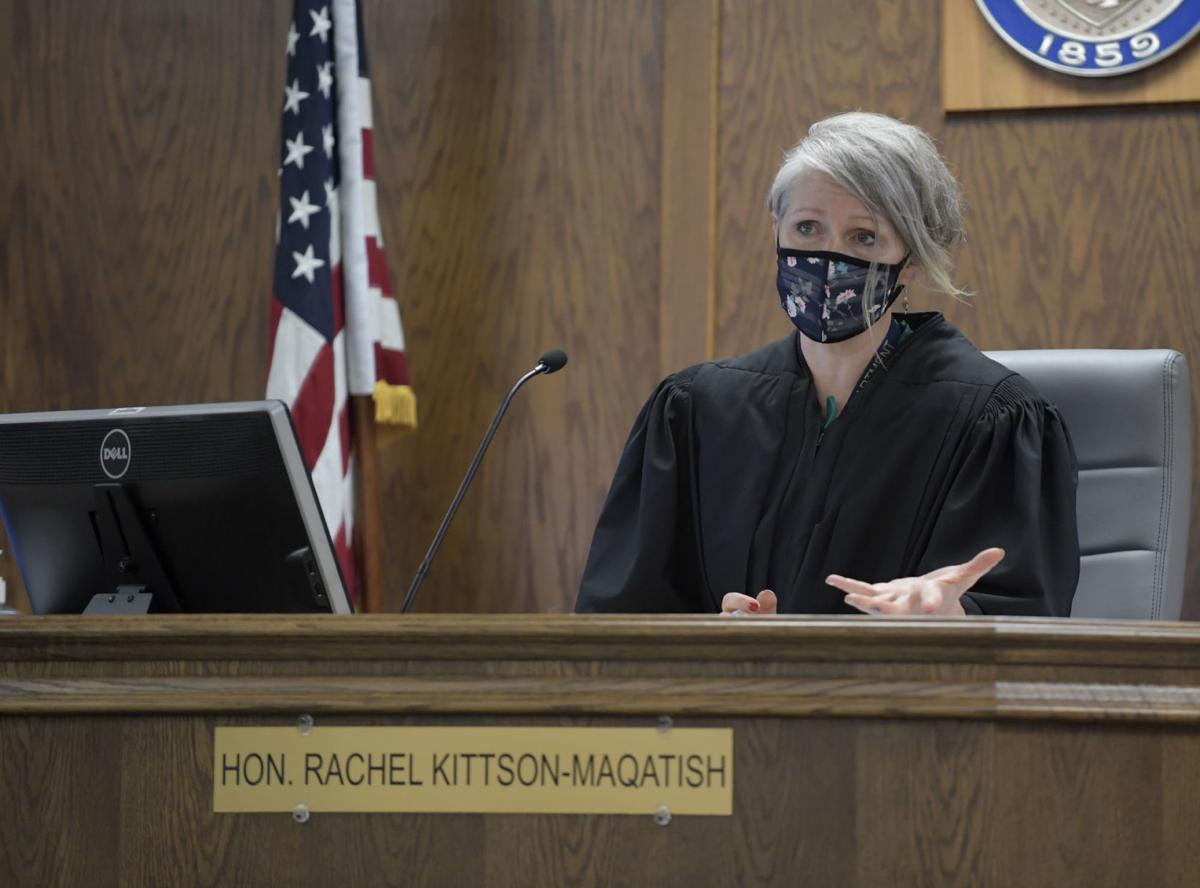 A Lebanon woman was sentenced in Linn County Circuit Court on Thursday morning to 11 months in prison for a crash that killed an Albany motorcyclist.

The sentence was a downward departure from the presumptive sentence, given Carnes’ complete lack of criminal history, of 16 to 18 months. Judge Rachel Kittson-MaQatish noted Carnes’ record, that she only had 11 months with a driver’s license, and that she was 19 at the time of the crime.

“Any one of those factors would have been sufficient for a downward departure in this case,” Kittson-MaQatish said.

Carnes will be eligible to shave time off her sentence with good behavior while incarcerated, and there also will be a reduction due to time served in jail after her arrest. She faces a lifetime revocation of her driver's license.

A charge of second-degree manslaughter was dismissed at sentencing as part of the plea deal.

Prosecutor Douglas Prince had asked for a sentence of 18 months in prison in the case, noting the initial manslaughter charge. “The circumstances of this case are more elevated than a typical criminally negligent homicide,” he said.

The fatal crash occurred on the afternoon of May 14, 2018. Watson’s motorcycle collided with a Toyota Prius driven by Carnes at the intersection of Seven Mile Lane and Tangent Drive.

Prince said that Carnes, then a student at West Albany High School who commuted back and forth from Lebanon, ran a stop sign on Tangent Drive at the road crossing.

According to an eyewitness, as she approached the intersection, Carnes slowed down, looked north, saw a southbound pickup on Seven Mile Lane, and calculated that if she went immediately, she could beat the rig. Instead of stopping, she “punched it,” Prince said.

“She didn’t look right to look for northbound traffic,” he added. Watson smashed into Carnes’ vehicle.

None of Watson’s family attended the sentencing, as they were concerned about the young woman’s death rather than the prosecution and punishment of Carnes, Prince said.

Defense attorney Arnold Poole said there was no doubt in Carnes’ mind that she caused the crash. “She has exhibited so much regret and remorse over this,” Poole said.

Carnes asked several times to talk with Watson’s family but was told that wasn’t an option due to a court order, Poole added. He said she also left flowers for Watson at her gravesite and the scene of the crash.

In a brief statement to the court, Carnes’ voice quaked with emotion and she struggled to compose herself. “I feel for the family. … I’m sorry, I’m at a loss for words right now,” Carnes said.

Watson was a 2014 graduate of West Albany High School and a 2017 graduate of Linn-Benton Community College. She worked as a horse trainer.

In imposing her sentence, Kittson-MaQatish said she thought about the case as a mother and grandmother, and said she prayed that her children would come home safe and do no harm in the world.

She said there was nothing she could ever do in the courtroom to bring justice for the Watson family. “Likely, there’s nothing I can do to ease their pain,” Kittson-MaQatish added.

Kittson-MaQatish said that Carnes’ behavior and actions moving forward would say more than words ever could to Watson’s family.

“What you do from here is your decision. This will define you to a degree. I hope you use this tragedy for good. I hope you can help people learn from this,” the judge said.

She hoped the case would spur local families to have conversations with teens around the dinner table about the dangers and risks of driving, and making good decisions behind the wheel.

A Lebanon woman has pleaded guilty to criminally negligent homicide regarding a 2018 crash that killed an Albany motorcyclist.

A Lebanon woman who allegedly killed a motorcyclist has been scheduled for trial.

Bail was reduced on Thursday afternoon for a Lebanon woman accused of recklessly and negligently killing a motorcyclist in a vehicle crash last year.

A Lebanon woman faces homicide charges for a crash that killed a female motorcyclist at Seven Mile Lane and Tangent Drive in May.

TANGENT – An Albany motorcyclist was struck by a car and killed at an intersection east of town on Monday afternoon.

LEBANON — A recreational vehicle burst into flames after pulling into a Lebanon tire store on Thursday, but employees were able to tow the bur…

Two teens have been arrested in connection with a burglary at a Lebanon vape shop.

Investigation is continuing into a fatal crash that happened at about 3 p.m. Sunday on Highway 22 near Gates, according to a news release from…

Miranda Carnes hugs a supporter before being taken into custody to start an 11-month sentence for criminally negligent homicide in the 2018 death of Sarah Watson in a traffic crash. Carnes, who was a student at West Albany High School, didn't stop at a stop sign on Tangent Drive at Seven Mile Lane and hit Watson, who was traveling northbound on a motorcycle.

Judge Rachel Kittson-MaQatish talks to Miranda Carnes after sentencing her to 11 months in prison in the death of Sarah Watson.