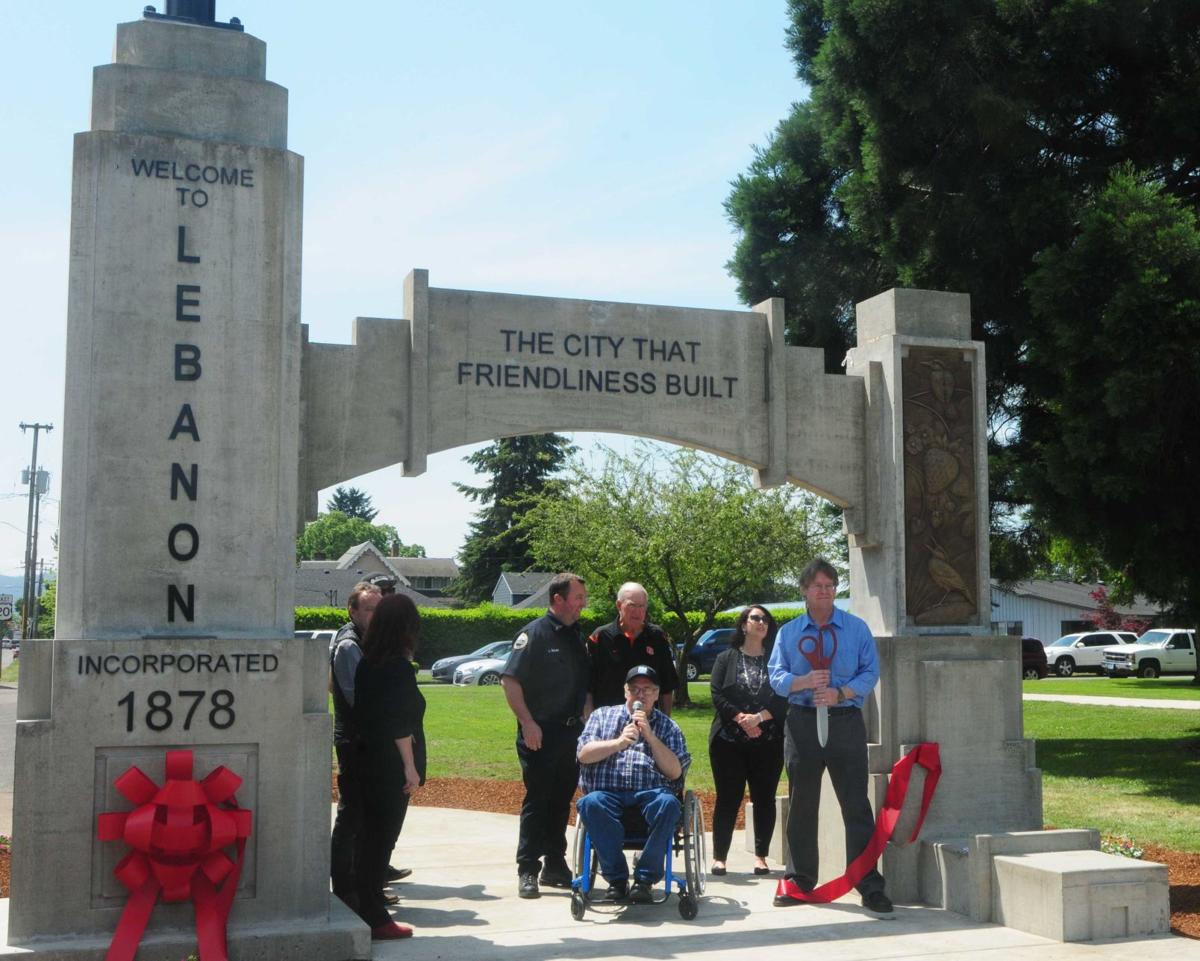 Lebanon's new northside welcome monument is not intended to be just a sign. It's also a piece of art.

Lebanon Mayor Paul Aziz led the ribbon-cutting ceremony for the monument on Thursday afternoon at Academy Square on Main Street. The guest of honor was San Francisco artist Heidi Wastweet.

Wastweet is a nationally recognized artist and a member of the American Medallic Sculpture Association and the National Sculpture Society. She has served two four-year terms on the Citizens Coinage Advisory Committee for the U.S. Mint.

Wastweet created the strawberry-themed bronze plaque that adorns the monument. She created the image out of clay and it was cast in bronze at a Bay Area foundry.

The initial idea was for a simple strawberry. Wastweet drew from childhood memories of her family's garden to elaborate on the theme.

"I remember specifically the strawberries and eating them right off the plant when I was little. Every year, when the strawberries got ripe, it was a race between the birds and the people, who could get there first," she said.

She nodded at this dynamic by including two birds on the image. She chose the Western meadowlark, Oregon's state bird, to be the hungry competitor.

The monument itself is in the Art Deco style in recognition of the buildings and homes in Lebanon's downtown that reflected that style when they were built in the early 1900s.

The monument will also include a time capsule, which has not yet been placed, that will be opened on the community's 200th anniversary on Oct. 17, 2078.

City Manager Gary Marks said this kind of project is why he chose his profession.

"My true love is community building and that's the purpose of this monument. First of all, to build community by making a statement to the outside world about who we are as Lebanon," Marks said. "Just the presence of this as you come down the street. ... This thing makes a statement. It says that we are a growing and thriving community, and that we take pride in ourselves."

Marks said the final cost of the project, including the commissioned artwork, will be between $60,000 and $65,000. This was funded by the Visitor Improvement Program, which is supported by the transient room tax.

"People who visit us paid for the monument, and state law requires we spend it on things that promote the community," Marks said.

A Lyons man stands accused of trying to kill a woman and other crimes after he reportedly choked her twice on Thursday night, causing her to l…

A Sweet Home man has been charged with criminally negligent homicide for allegedly causing the death of a Lebanon motorist in a Jan. 2 crash a…

A Sweet Home man accidentally shot himself in the leg on Friday morning, according to a report from the Linn County Sheriff’s Office.

A 20-year-old Oregon City man is facing felony charges of rape and other sex crimes in a Benton County case.

Two people were hospitalized with serious injuries Monday night after a two-vehicle crash on Highway 20 near Spicer Drive, outside of Lebanon.

People love their pets and furry critters, so it is no surprise that a proposal to make outdoor cats illegal within the city of Albany has rec…

Housing still the issue in Corvallis

The “state of the city” these days in Corvallis seems to point increasingly toward one word: housing.