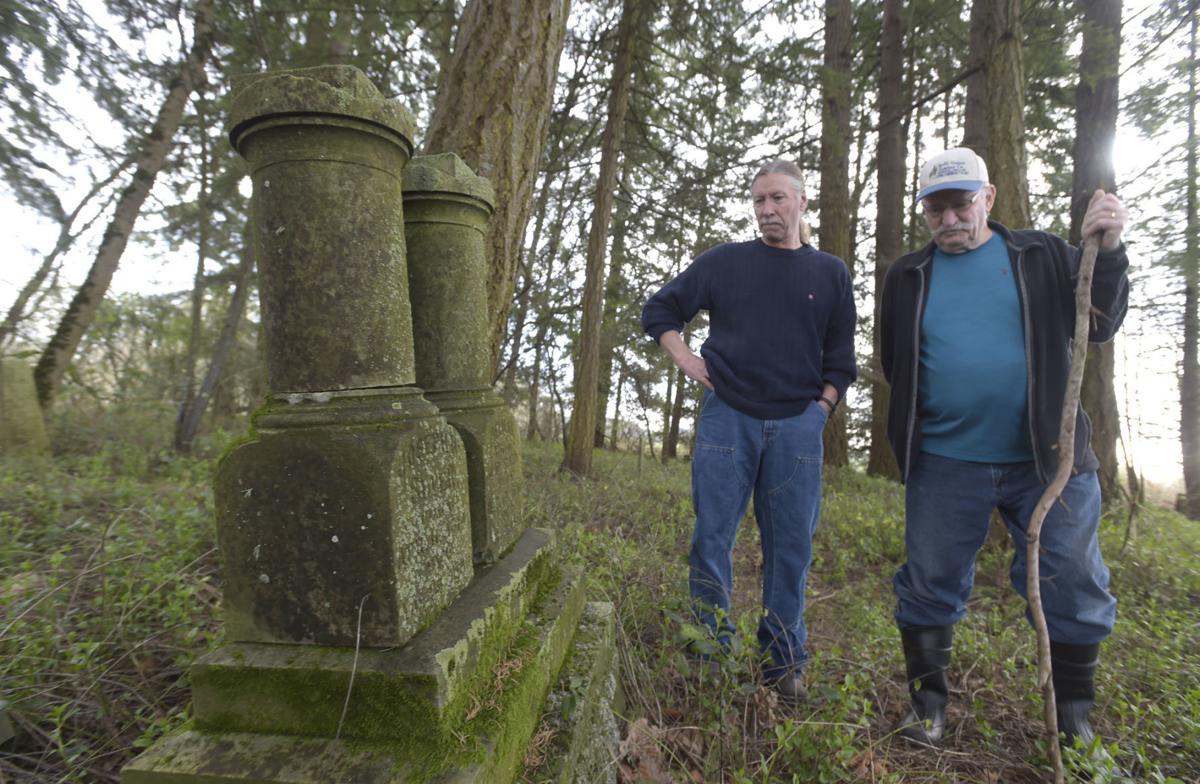 New Gingles Cemetery owner Rick Pyburn, left, and volunteer Ron Tucker look at the tombstones of the Suvers, who founded the town of Suver in 1881, at the cemetery. 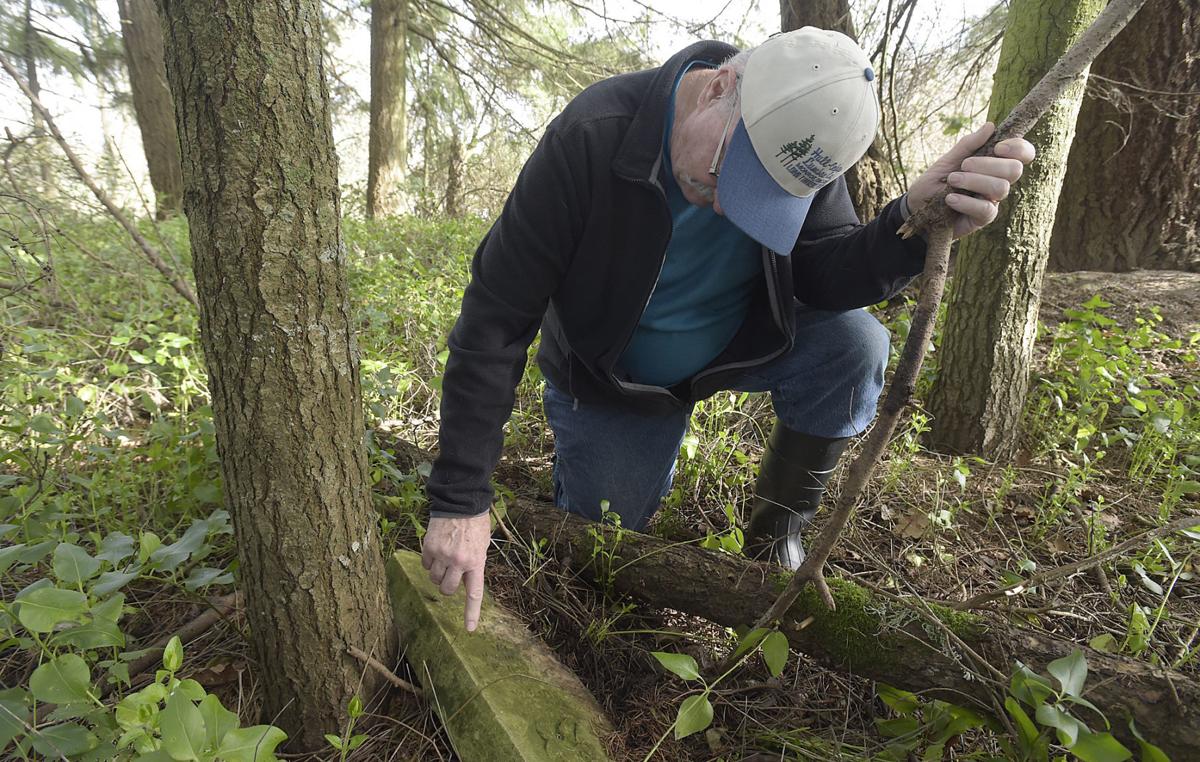 Tucker examines the name on a tombstone at the pioneer-era Gingles Cemetery. 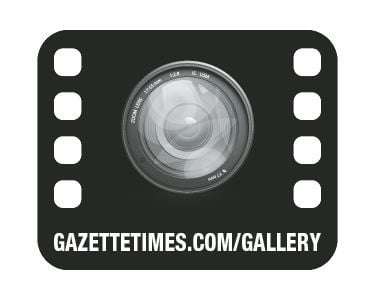 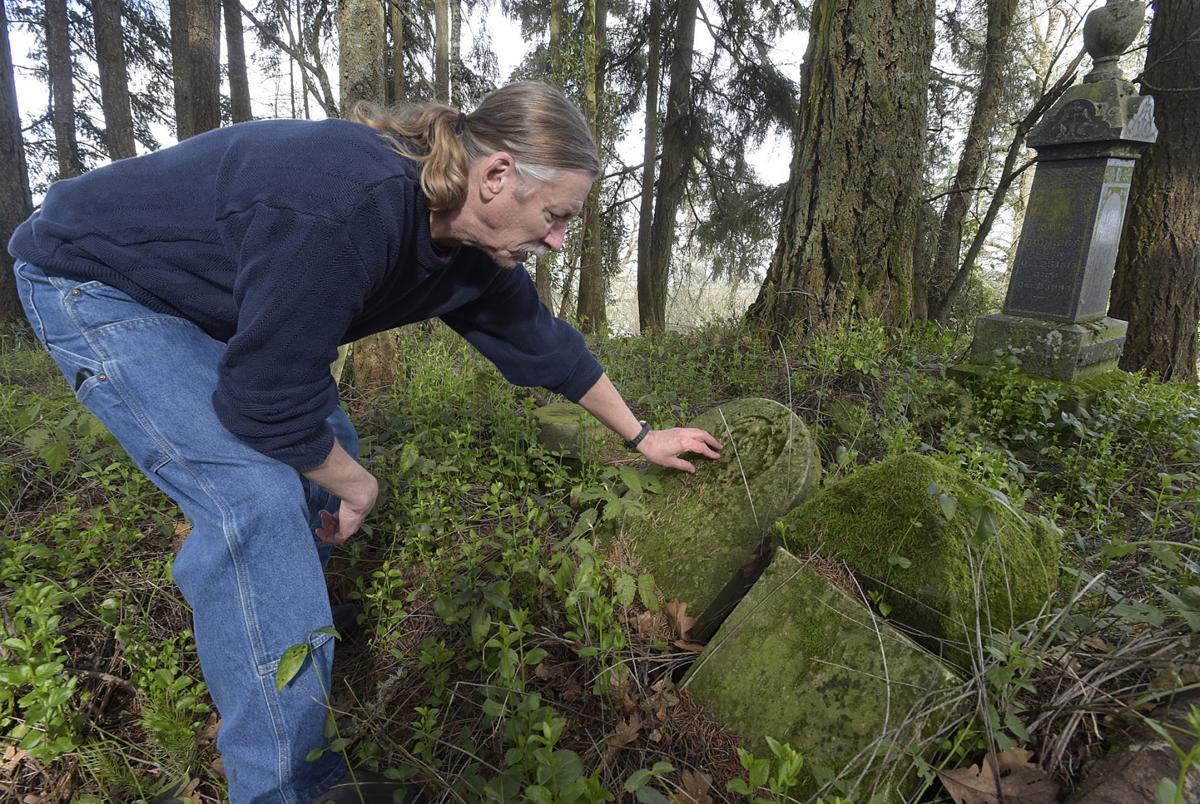 Rick Pyburn looks at the grave marker that may belong to a Gingles family member whose name the cemetery bears. Pyburn purchased the cemetery earlier this year from Greater Albany Public Schools. 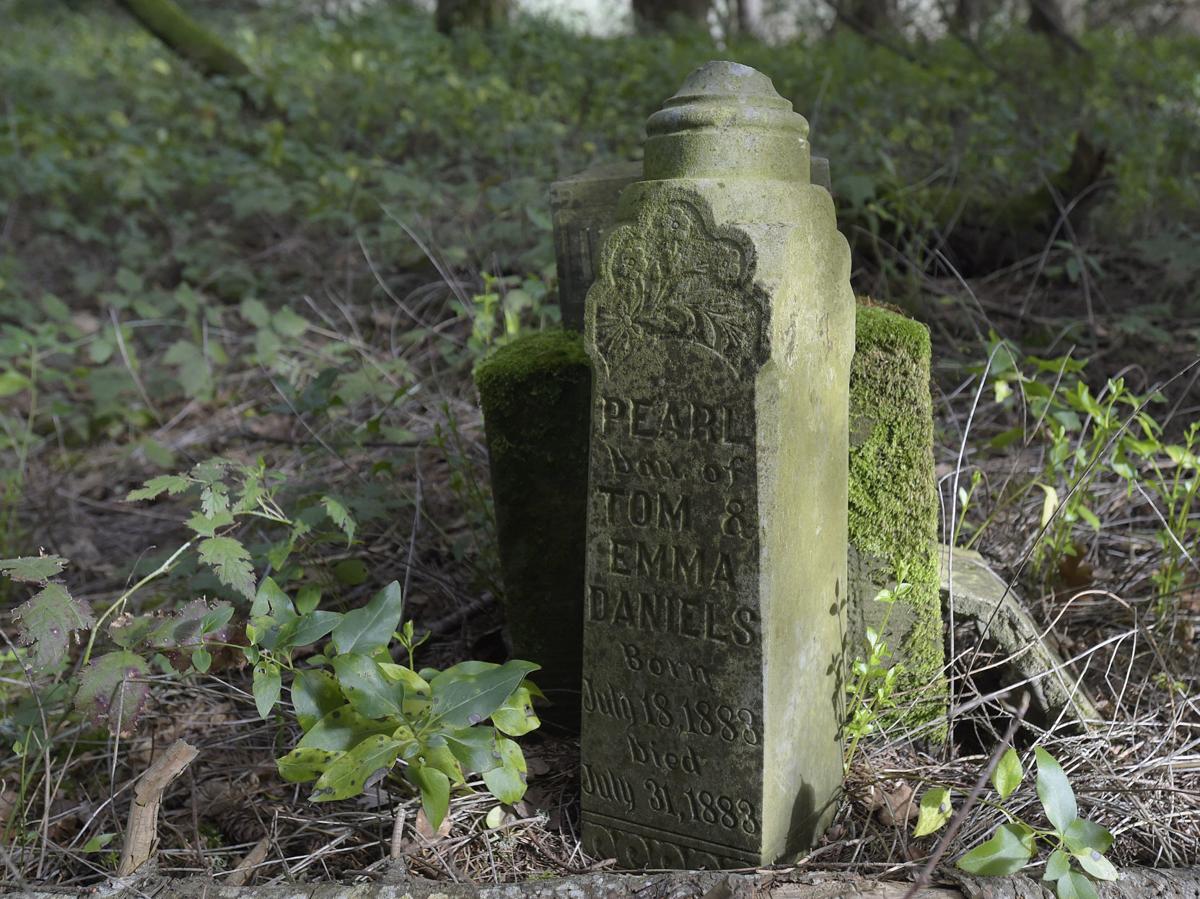 Once the brush is cleared from the cemetery, there are hopes to bring in workers that specialize in restoring grave markers.

Rick Pyburn often thinks about the lives of the people who have been laid to rest at Gingles Cemetery.

There's the Dixon family, for instance, who lost four little ones between 1880 and 1882. There's Rachel Pyburn, who's likely a distant relative. And there's the plot for James Gingles himself, a pioneer who served as a Benton County commissioner and a state representative, as well as the original owner of the cemetery.

Pyburn thinks about them and the hardships they must have endured, in contrast to people today who complain, say, they couldn't find a parking spot close enough to the store.

The retired construction company owner wants to honor the legacy the stones represent, which is why he asked to take over ownership of the pioneer-era cemetery.

Pyburn lives not far from the cemetery, which is off Springhill Drive northeast of Adair Village. He approached Greater Albany Public Schools late last year about taking over the site and the Albany School Board agreed.

"My main reason for doing this is I want to restore this cemetery to honor the people who are buried there," he said. "It's as simple as that."

Researchers believe the cemetery originally was a Gingles family plot that later expanded to include neighbors and the surrounding community.

In 1886, James Gingles (pronounced "Jingles") deeded the hilltop that contained the three-quarter-acre cemetery to what was then the Wells School District. That land became the Benton County School District, then the Fir Grove School District, which was absorbed into Greater Albany during an overall consolidation in 1979.

Albany never really wanted a cemetery — school board members were surprised to learn of its existence six years after the district took it over — and provided no maintenance or upkeep over the years, although it donated gravel and other cleanup materials on request.

Then Pyburn made contact. He had hiked there a few times and was intrigued by the quiet grove of enormous fir trees surrounding tilting stones almost buried in duff and moss.

"I can see the trees from my house. They kept calling me," Pyburn said. "One day, I walked on back. I looked at it through different eyes."

The Albany School Board voted unanimously Jan. 22 to transfer the ownership to Pyburn. Pyburn picked up the deed earlier this month.

Pyburn has contacted officials with the state to see if grants might be available to help him with his effort. He'd like to remove brush and dead trees, build a wooden fence with a nameplate arch and establish a website for the cemetery. He's also met with an excavator to start working on a way to get a road to the site.

He already has an email — ginglescemetery@talkinghawk.com — where people can contact him who want to visit the site. He might one day use it to recruit volunteers, he said, but for now he wants to work with people who know how to clean the area without accidentally causing damage.

One such person is Ron Tucker, who learned of the cemetery through a Democrat-Herald story and offered his services. Tucker, of Adair, does genealogy for a hobby, which led him to learn the proper method of cleaning gravestones. He's volunteered to do that for some 40 years.

Tucker mixes an ounce or so of film fixer — the kind you'd use in an old photo darkroom — with 30 to 40 ounces of water. Then he uses a soft bristle brush and a lot more water for rinsing to carefully clean the stones of lichen and moss.

"You just spray it on and just keep cleaning and cleaning," he said. "No putty knives, no chalk, no pressure washers. All that leaves a residue."

In Tucker's mind, taking care of history is a part of taking care of the future. And, like Pyburn, he sees it as a way of honoring those who came before.

"They had tough lives out here, staying out here, burying their children," he said, nodding at the Dixon tombstones. "Why put up stones if you're not going to take care of them?"

Someday, Pyburn said he envisions having a well-established Gingles Cemetery website that gives information about each of the people buried there. That will take time and effort, however. While various community groups have taken a shot at recording the stones and the names they bear, nothing was ever done formally, and more graves likely exist than those that are readily seen.

It's work Pyburn wants to take on, however — and to share with the world, once it's finished.

Right now, all but the largest stones are almost invisible in the bracken, and many of them are broken, listing or so faded by time and weather as to be nearly illegible.

"What a change it would be," Pyburn said, surveying the silent grove, "to get this all cleaned up."

Sunisa Lee's father after gold: 'Is this real?'

Sunisa Lee's father after gold: 'Is this real?'

Albany board open to cemetery transfer

Members of the Albany School Board said Monday they're fine with turning over the Gingles Cemetery to a new caretaker, but have not taken form…

New Gingles Cemetery owner Rick Pyburn, left, and volunteer Ron Tucker look at the tombstones of the Suvers, who founded the town of Suver in 1881, at the cemetery.

Tucker examines the name on a tombstone at the pioneer-era Gingles Cemetery.

Rick Pyburn looks at the grave marker that may belong to a Gingles family member whose name the cemetery bears. Pyburn purchased the cemetery earlier this year from Greater Albany Public Schools.

Once the brush is cleared from the cemetery, there are hopes to bring in workers that specialize in restoring grave markers.