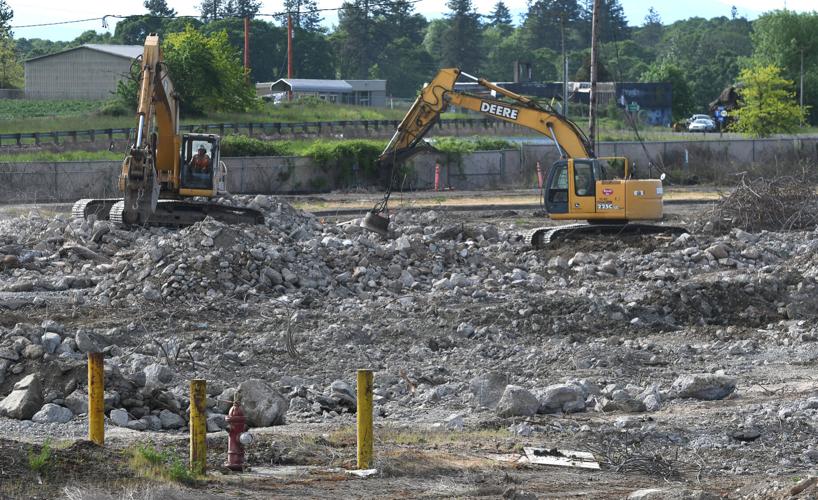 Workers clean up rebar and concrete from the old International Paper Mill site in preparation for the groundwork of the new intermodal facility in Millersburg. 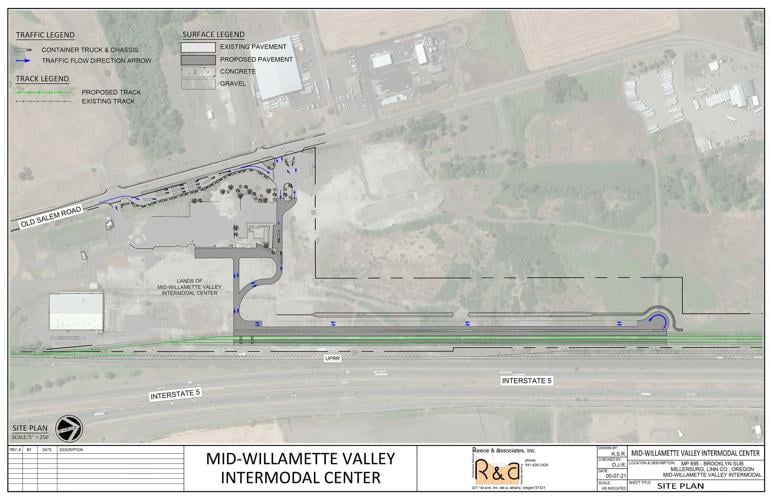 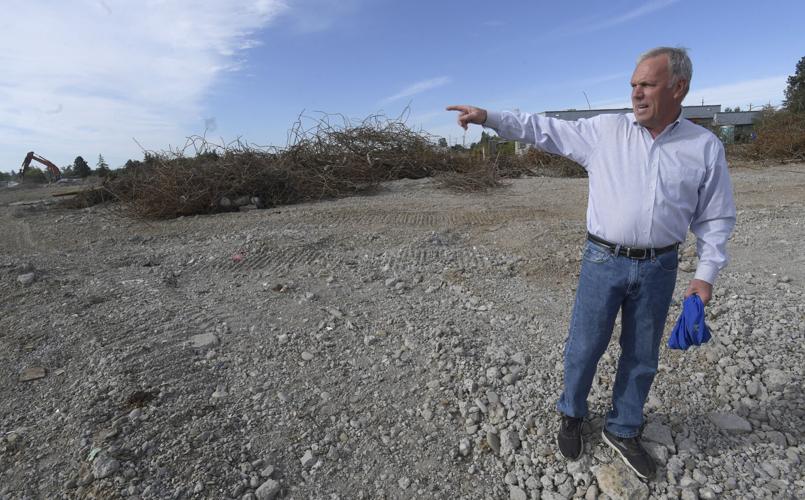 Linn County Commissioner Roger Nyquist talks about the ongoing cleanup work of the old International Paper Mill site that will become the intermodal transportation facility. Nyquist says the project will provide a big boost to the county's agricultural businesses. 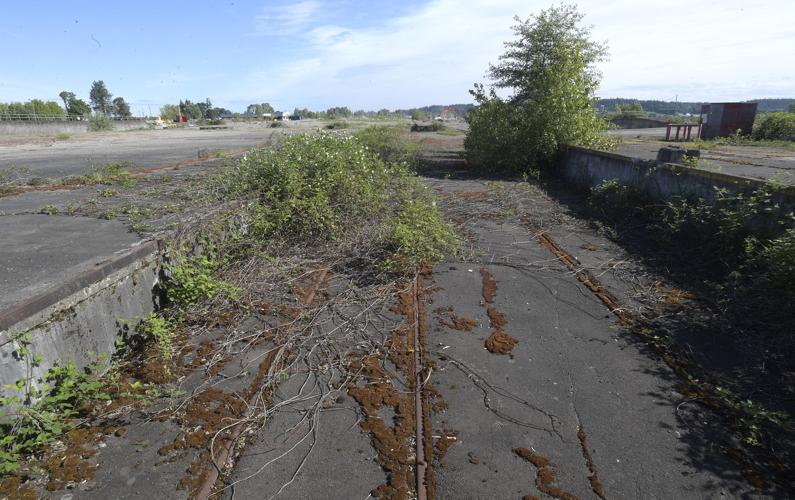 A pair of railroad tracks run in between raised concrete that used to house structures on an old paper mill site in Millersburg. When the project is completed new tracks will play host to container trains destined for ports. 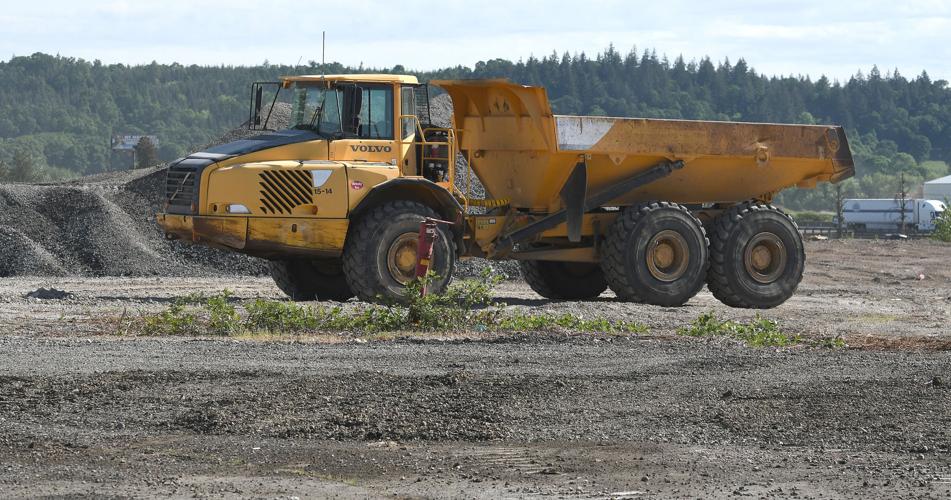 Prep work has started in cleaning up concrete and asphalt from the paper mill in Millersburg. 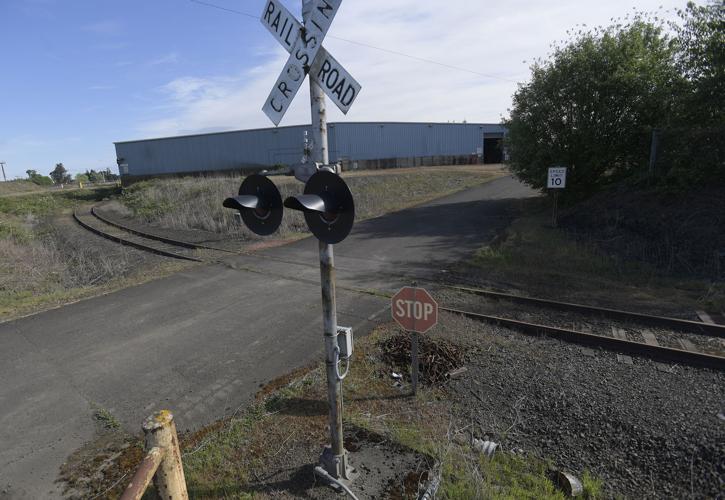 One rail crossing still remains on the site of the old International Paper Mill.

Initial site work has finally begun on the Mid-Valley Intermodal Center in Millersburg, after a yearslong process of planning and competing against other counties in Western Oregon for state funding. Once completed, officials say, the site will provide a large boost to the Linn County economy.

The site, a 60-acre parcel where the International Paper mill used to sit, will be used for loading cargo from trucks onto train lines bound for Portland, Tacoma and Seattle. Officials say there is already high interest from several local companies throughout Oregon to use the site once it’s finished.

“There’s a lot of interest in leasing some space out there so people can get their products onto rail lines,” said Linn County spokesman Alex Paul. He added that these types of sites really “streamline the process” for businesses, cutting costs and saving time.

Right now, the site work involves ground preparation, and the entire concrete lot has been broken up and moved into giant piles of asphalt so that more extensive ground-breaking can be completed. Officials are aiming for the site to be ready for operation by January, 2022.

During a Thursday tour of the site, one could see mounds of bent rebar that used to be the skeletons of the old mill buildings that stood there for decades. Remaining are the main office building and an 80,000-square-foot storage warehouse. Once finished, the site will contain a staging area for trucks to unload goods and containers and store them until train cars can be loaded up.

The project marks the culmination of years of effort to secure the site and vie for the state contract that is paying for the construction. The idea was borne out of the Oregon Transportation Commission, which aimed to add more intermodal sites in areas that will pull truck traffic off of busy interstates and away from the packed Portland metro area. Sending more goods along rail lines also helps the state meet its goals of lowering emissions by allowing large diesel trucks to haul goods shorter distances.

Former state Rep. Andy Olson, who represented parts of Linn and Benton counties from 2005-2019 and sat on the Oregon House Transportation and Modernization Committee, played a key role in promoting the site in Millersburg. Initially, the state was not even looking at a Western Oregon site. Instead, the favorite was one in Eastern Oregon in Nyssa, right next to the Idaho border.

Linn County Commissioner Roger Nyquist recalls conversations with Olson in which they discussed the idea of having another hub closer to where Oregon traffic is heaviest along I-5.

But Linn County had to compete for the state funding along with several other sites, such as one from Lane County and one in Marion County near Brooks. Applicants were required to have a clear site plan and benchmarks for certain cost analyses, as well as approval from a railroad operator such as Union Pacific.

The problem was, Linn County didn’t have a site secured for the project until the 11th hour. It was only after securing the land that Linn County was awarded the state funding of $26 million for the site.

“A large part of that application hinged on a site we didn’t own — this one,” Nyquist said, standing Thursday amid the rubble of the International Paper mill site.

The county purchased the land for $10 million in 2019, with plans to sell the 60-acre lot where the intermodal facility will actually sit to the nonprofit Albany-Millersburg Economic Development Corp. (AMEDC) — which now owns the parcel. That organization will then use the revenues from the facility to bolster other development projects throughout Linn County.

“Part of the endgame is that the revenue AMEDC receives will be invested back into the county by way of economic development,” Nyquist said.

The county’s purchase also includes another 130 acres adjacent to the intermodal site, which officials plan to develop into a business plaza. The Eastern Oregon companion site in Nyssa also secured $26 million from the state. Both sites likely will see many different types of businesses utilize them, although much of the product will be shipped from local farms. Linn County’s is expected to ship hay, straw and grass seed.

Early estimates show that about 40,000 shipping containers will move through the site annually, amounting to lots of contracts with businesses to store their goods there and ship them along the rail lines. To meet that demand, the hardest hurdle may be in securing enough empty storage containers to ship the products.

The mid-valley, which exports more than it imports, has a frequent shortage of shipping crates. That means a big part of the success of the site will hinge on securing agreements with similar facilities all over the United States, especially ones that have surplus crates that can be shipped to Oregon. With all the business agreements still being hashed out while work on the site is completed, the details are still being kept fairly close to the vest.

But it’s all evidence of a high demand for a new freight depot, which is what makes this such a valuable acquisition for Linn County.

“The ag community especially is pretty excited about this,” said Nyquist, noting that having a shipping depot closer to home will help local producers save on costs. “Long after I’m gone, we think this will be a really great achievement.”

See this story at the website for a gallery of photos of the future intermodal hub.

The Linn County Board of Commissioners and the Linn County Fair Board are urging everyone to get ready for an in-person fair this year. The an…

The latest rise in COVID-19 infections in Oregon has peaked and is heading down, though Central Oregon continues to have some of the top case …

Gerding Companies, the prominent construction company based in Corvallis, has selected a new CEO. The former CEO and familial owner of the com…

Big political names met in a strip mall parking lot along one of the most dangerous stretches of highway in Oregon on Wednesday. The purpose o…

A picnic for former employees of the International Paper mill in Millersburg is set for 11 a.m. Aug. 25 at Millersburg City Park, 3030 Alexand…

Workers clean up rebar and concrete from the old International Paper Mill site in preparation for the groundwork of the new intermodal facility in Millersburg.

Linn County Commissioner Roger Nyquist talks about the ongoing cleanup work of the old International Paper Mill site that will become the intermodal transportation facility. Nyquist says the project will provide a big boost to the county's agricultural businesses.

A pair of railroad tracks run in between raised concrete that used to house structures on an old paper mill site in Millersburg. When the project is completed new tracks will play host to container trains destined for ports.

Prep work has started in cleaning up concrete and asphalt from the paper mill in Millersburg.

One rail crossing still remains on the site of the old International Paper Mill.