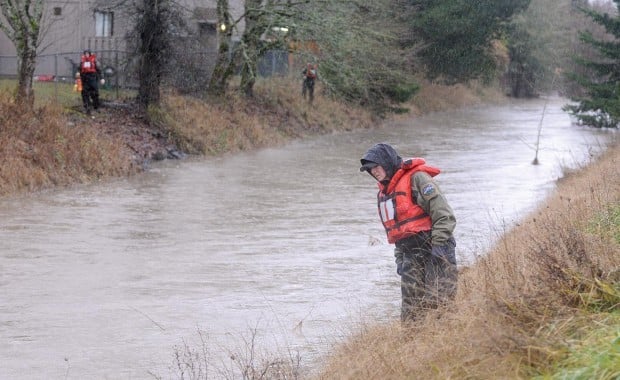 Linn County Search and Rescue members comb the banks of Periwinkle Creek downstream from where the car went into the water. (Mark Ylen/Democrat-Herald) 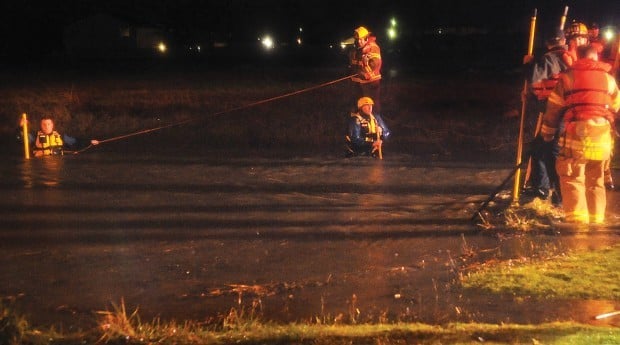 Albany firefighters search Periwinkle Creek after a car with a man and two children was swept into the swollen Creek. (Mark Ylen/Democrat-Herald)

The body of Catherine McLaughlin, 18, was recovered this afternoon from Periwinkle Creek, about 12 hours after the body of her 20-month-old son, Aiden, was pulled from the water.

They were in a car with Christopher Wilgus and his son, Maliki, 5, when it was swept into the creek from a flooded parking lot at Megafoods around 7:10 p.m. Wednesday.

Maliki was rescued from the water around 7:30 p.m., and his father was pulled out shortly thereafter.

Maliki, a kindergartner at Lafayette Elementary School in Albany, was listed in critical condition this evening in the pediatric intensive care unit of Oregon Health & Science University Doernbecher Children’s Hospital in Portland.

His father was treated at Samaritan Albany General Hospital Wednesday night and released. He was reportedly in Portland with his son.

The Albany school district FACT team was to send representatives to Lafayette Friday for any student who wanted to talk with someone about the tragedy, said Jim Haggart, executive assistant to the superintendent.

According to police Capt. Eric Carter, a family member found her body, which was then pulled from the water by fire department staff around 12:45 p.m.

Carter said McLaughlin’s body was found stationary under water, and the creek was about 3 feet deeper than normal.

The car, a dark-colored Buick sedan, has not yet been found.

Ray and McLaughlin were classmates at South Albany High School, and both worked in the child development center. McLaughlin earned her GED through Linn-Benton Community College in June 2010.

“She was a very caring, loving mother,” Ray said. “She had her son while still in high school, and two months later she was doing very well for herself.”

Ray said she used to babysit Aiden and Maliki.

Mundt, who said he’s a friend of Aiden’s father and also of McLaughlin, described her as sweet but quiet, saying she didn’t really open up until you got to know her. He said a candlelight vigil is planned at 5 tonight at the parking lot at Megafoods in their memory.

Oliver Blevins of Albany, who counts Wilgus among his friends, said his ’80s-style rock band, Slashbanger, will have a benefit concert Saturday for both families.

The concert will be from 7 to 9 p.m. at Riley’s Billiards, 124 Broadalbin. The cover charge is $5 per person and attendees must be at least 21 years old. Proceeds will be given to the two families.

A witness called 911 around 7:10 p.m. Wednesday after seeing a car drive across the parking lot at Megafoods toward Geary Street, into high water, and get swept into Periwinkle Creek, which runs between the parking lot and Geary.

Initial reports said the vehicle in the creek was involved in a collision, but both the Albany Fire Department and the Albany Police Department said their investigations so far indicate only that the car made a turn into the west end of the parking lot and was swept into the creek.

The creek is normally a slow-moving channel that crosses underneath the intersection of Queen and Geary. Wednesday night it was a raging torrent with the water nearly level with the street.

Wanda Omdahl, spokeswoman for the Albany Fire Department, talks about the rescue effort after a car went into fast-flowing Periwinkle Creek fr…

Linn County Search and Rescue members comb the banks of Periwinkle Creek downstream from where the car went into the water. (Mark Ylen/Democrat-Herald)

Albany firefighters search Periwinkle Creek after a car with a man and two children was swept into the swollen Creek. (Mark Ylen/Democrat-Herald)